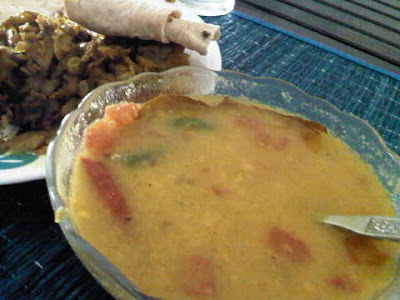 I had earlier written about the microwave masoori daal which K makes inspired by mom and has now taught Banu and me. This is the easiest daal to make in the world.

Well, I discovered the second easiest daal to make today. This was inspired by something K cooked in the early years of our marriage when she shocked me by not roasting the moong daal before cooking it. I remember getting quite agitated then.

Today's daal was so easy that I managed it with a bad back and when I was blind with hunger. I didn't want to have the rotis and Bengali cabbage shobji which Banu made yesterday and which were in the fridge by themselves. It seemed to dry. I needed something to go with it.

So here's what I did:


The result was fantastic and I am not even a big daal lover. It was warm, the ghee added just the right touch of indulgence and coquetishness with the latent heat of the chillies adding to the mystique. The touch of sugar added balance. The under spiced daal did bring alive a rather simple lunch of roti and cabbages. Credit goes to the ghee or clarified butter to a large extent if you ask me.
Bengali food Lazy cooking Lonely Hearts cooking Recipes vegetarian stuff

Anonymous said…
Hey Kalyan, Can you tell me what the picture on your banner is? Are they some kind of sweets? I've never seen them before. They look like cute earthen matkis.
-Manu
4 March 2011 at 00:25

Anonymous said…
I think the credit should go to your hunger! The hungrier you are, the tastier things become - yes even the simple ones.
I like moong daal but the only time I really like it is when I am very very hungry with no other options.
4 March 2011 at 06:34

Kalyan Karmakar said…
Manu, this is 'jolbhora shondesh' or the soft centred jaggery sandeshes of Bengal. The shape is a creative take by this sweet shop. Didn't eat any so can't say how this batch was

@Harman, what's life without a touch of ghee. Bongs add ghee to rice though and not daal

Anonymous said…
Add a pinch of hing (asofoetida) when you are boling the dal in a pressure cooker. Gives a nice flavour - and eliminates the need for Ghee at a later stage
-Ips
4 March 2011 at 15:14