on April 08, 2011
There’s a Mumbai Food Blogger’s dinner tomorrow. Thought I’ll squeeze in a Mumbai post here so that I qualify for that ;) 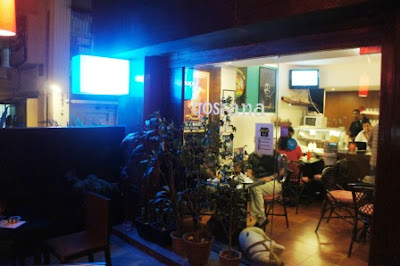 Then K heard about Gostana from a friend and the two of us landed there last evening. Gostana had shifted from their off Carter Road location and are now in a lane at Pali Naka beside Da Vinci and Chariot, the DVD library.

It’s a small place with a couple of tables outside which, given the heat and dust of Mumbai, didn’t work for us. There was a small section air conditioned section inside with another 2 or 3 tables. Once you sit down in this rather cozy little section with nice posters, some books and mags and free wifi (as advertised), Apple comes up to you, sniffs you, nuzzles up if she likes you and then flops down pretty much the way I would on a holiday at home. Till the next person came in when the same routine follows. 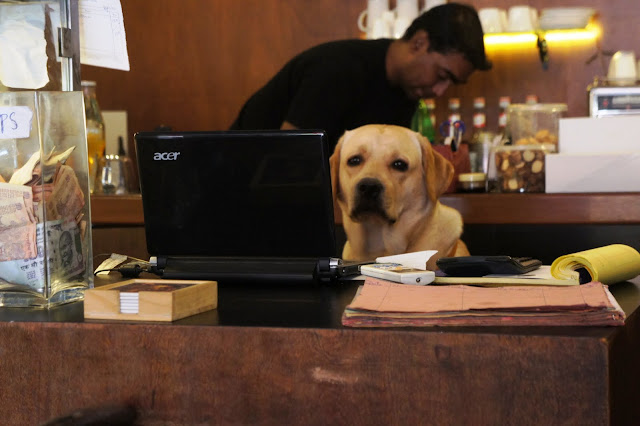 Apple Gostana is an eleven month lab who, unlike Marley, is far from being the 'world's worst dog'.

K ordered the House Lemonade and couldn’t stop raving about how the taste was just right. I took a sip. It had a nice refreshing kick without being too powerful. Well balanced.

I suspiciously asked if the coffee was good as coffees at food shop often disappoint me. Well the cappuccino I ordered did have a nice kick and I liked the fact that they gave a couple of tiny little cookies with the coffee. I always like to nibble on something with my coffee. Cookies or petite fours are the safer and more socially acceptable options. 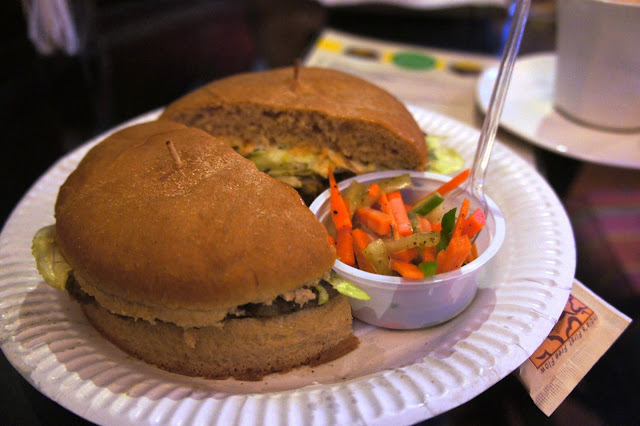 We skimmed through the ‘healthy burger’ list. Went passed soy, spinach, fish, chicken when K said ‘ground beef’. I had spotted that too. We waited for our burgers and my antennas went up once as I heard the ping of the microwave. Whole wheat, microwave, I was prepared to dislike it.

The burger came. Cut into half. Pretty large. The whole wheat bun was nice and firm, didn’t crumble unlike the stuff at KFC. K bit into her burger as I photographed and broke into a big grin and exclaimed happily, ‘this is the best burger ever’. I followed her lead and took a bite. The meat was full flavoured and very distinguished. Moist and as K put it extremely tender. This was really tasty stuff and far removed from the antiseptic image that ‘healthy’ conjured in my mind. The burger was heated right too. 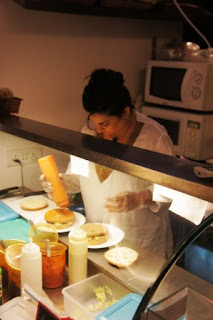 Which is when we me the owner, Arpana, who describes herself on twitter as ‘SGI Member...Chef, waitress, Dog walker...burger maker',  and her business partner Lenny. As we chatted I found out that Gostana and the food that they served was the result of a dream built over eight years. And it showed. 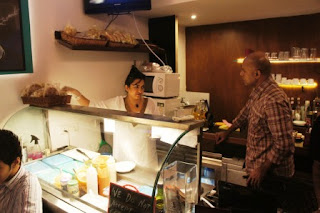 We found out the secret behind the good coffee. Arpana, had trained at Blue Mountains, near Sydney, where coffee is treated with the respect is deserves. The impressive whole wheat patties were made in house. As were the cookies which were apparently muesli cookies and had a nice crunch to them. And then came the clincher. The beef patty was apparently steamed and not fried and was oil free. This seemed to cut down on the red sins of beef and yet keep its seductiveness. Well, if one were to jump off a plane then a parachute would be a good idea. 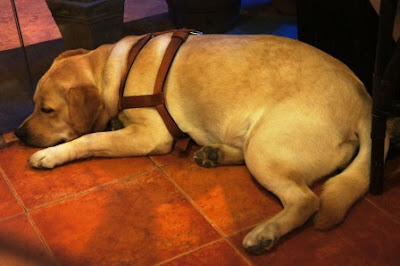 Arundhuti said…
Whenever I happen to be in Mumbai the next time, I'm visiting Gostana. Only and only for Apple, who has the most innocent look ever! Thanks for putting Apple's pics.
23 April 2011 at 15:50

Shaheen said…
My experience at Gostana was quite the opposite.

I went there after reading all sorts of things about it on Twitter. You should have seen the look on our faces when we saw how the burgers were being made. Pre cooked meat. Microwaved. I wish I'd asked them to stop after the first burger. The two burgers were barely bitten into - Couldn't keep fooling ourselves and didn't want disrespect the food, so we packed it up. A. grumbled all the way back home.

I'd expect wholewheat bread to be more dense and 'nutty', if I may put it that way. This was like a ball of cotton that soaked up all the sauce and made the burger very soggy. Who the heck microwaves bread?

We ordered a beef and chicken burger It should have sent alarm bells ringing when they didn't ask me the meat doneness I'd prefer. The beef patty wasn't even a patty. The mince was falling apart. Nothing but the most atrocious rendition of kheema pao. Burger meat shouldn't be precooked so much before time.

@Shaheen, well thanks for sharing this. One point I should have made was that the patty being steamed and not fried was indeed redolent of a kheema mix rather than the usual patty. Having said that I must say that we had it twice and it worked for us. Hope the folks at G take notice of your feedback
24 April 2011 at 02:20