on April 16, 2011
Ling's Pavilion at Colaba is your only hope for some reasonably authentic Chinese food at Mumbai. The photos taken by my BB under very poor lighting don't do the food justice
“Hello, my name is Kalyan, can I book a table for eight for 8.30 tomorrow night?”
“Ok Sir”
“I also want to book a Hainanese chicken rice that Baba Ling said he would make for us”.
Silence.
“Tomorrow difficult sir”
“I will be coming with Manisha, Cheryl, Ranjit. They are regulars at your restaurant. For many years”
“Sorry sir”
“I write on Finely Chopped and I have written about you guys, please?”
Silence.
“It is the Bengali New Year tomorrow. We really want to have the chicken rice.”
Hushed conversation at the background. Silence.
“Ok sir, we will make it.”
Well feast your eyes ladies and gentlemen, I don’t know which of the levers worked but this is a picture of the Hainanese Chicken rice that was put together for us for our Poila Boishakh dinner. 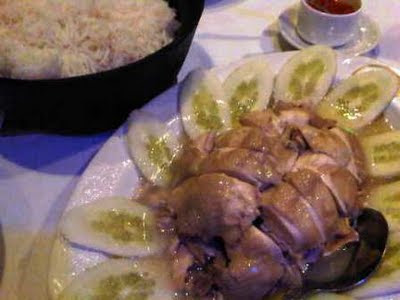 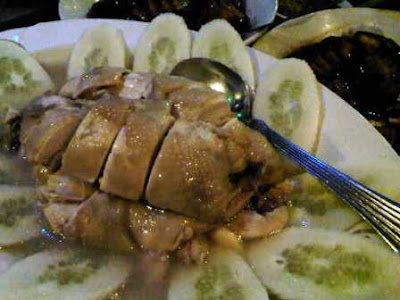 Having eaten Hainanese chicken rice at Singapore and its cousin, Ipoh chicken rice at KL, let me tell you that what they made for us at Ling’s Pavilion was as real as it gets. Right down to texture of the chicken skin, the taste and firmness of the meat, the demure finesse of the stock, the ephemeral nature of the rice cooked in chicken stock, the ginger and red chilli dips which came with the dish and the slices of cucumber that came with it. Last evening we were sitting at a table at one of Singapore’s many Hawker Markets. Bang in the middle of Colaba. This custom made dish for us cost all of Rs 700 (USD 14).
Three Bengalis. One half Bengali half Marathi. One Maharashtrian and honorary Bengali. One Parsi. One Goan.
Our dinner order, “No vegetables. Take no prisoners.”
Tagore, Bose and Ray would have approved off this.
Chilli garlic prawns as bouncy and fresh as we remembered it from last time. 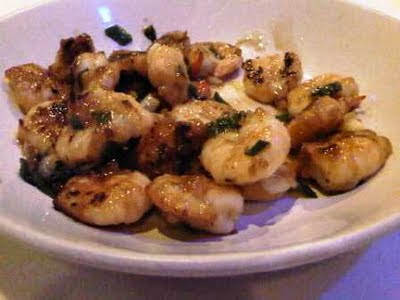 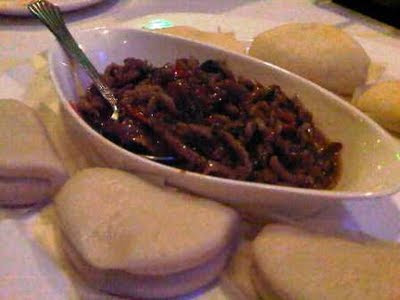 Pork belly, made in the base for their roast pork. Sujay, our maitre’ d from Darjeeling at West Bengal, put this dish together. Out of the menu. Marrying the cut of meat that we wanted with the preparation that we wanted.  A dish so colourful that K, for a change, asked me why I hadn’t brought my camera. 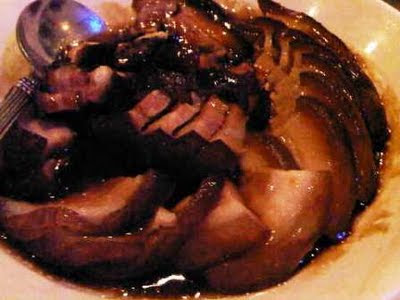 A mixed meat Hakka noodles which I initially ignored with all the wonders around. Then I took a bite. There were tears of joy in my eyes. Firm noodles, tender meat, a riot of strong flavours, a very thin film of sauce at the base ... every bite screamed Jimmy’s Kitchen to me. The Cantonese restaurant at Calcutta’s Park Circus where my dad used to take my mom and me for lunch everyday after school, in between his chambers. More than a quarter century later my little sister in law took us there for lunch. “I am not that little”, she said. 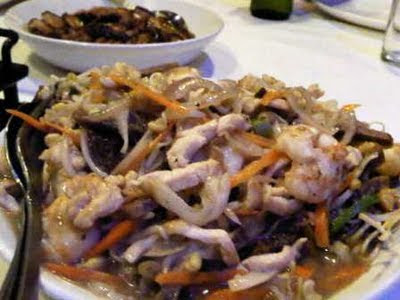 I remembered Soumik’s comment at Purepur Kolhapur. For once I too didn’t want dessert. I wanted to sleep with the memories of Kolkata, Singapore, KL and the dreams of the Orient unsullied by anything else.
Then Sujoy came up to us with a smile that was bigger than him. “Coffee ice cream. The chef has sent”. 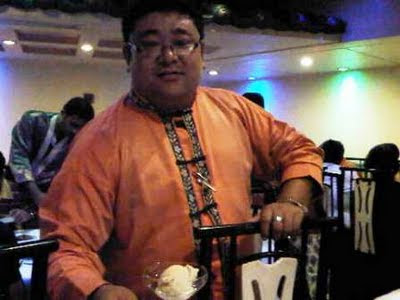 Sassy Fork said…
I think the fact that Finely Chopped chose to celebrate Bengali New Year with them was what got you the Hainanese Rice
16 April 2011 at 18:56

The knife said…
@Kurush, we were a a group of Johnny fans who normally push Sujay away and ask for Johnny. Johhnny had an off day and Sujay stepped in