on April 23, 2011
I caught a bit of the Ekta and Tushar Kapoor episode of Koffee with Karan the other day. Ekta Kapoor said that as a child she would claw at any of her father, ex Bollywood star, Jitendra’s female fans when they came close to him.
I am like that when it comes to Asian or Oriental cuisine. Extremely protective and possessive. To use Kainaz’s term, ‘unforgiving’, I am when it comes to Oriental food. I don’t suffer fools in the kitchen pretending to cook ‘authentic’ Oriental food easily. The memories of the faux Thai food that they served us at the Mariott Courtyard’s Red Zen in the recent food blogger’s dinner still makes me livid.
Which is why Bungalow 9 confused me. A colleague of mine raved about the lovely atmosphere there and the huge sense of space. But she is a vegetarian. Then I read my friend Sassy Fork’s review of Bungalow 9. I was confused even more. European. Asian. What was going on there?
So plans to go were made but never kept till a couple of days back. I was in a good mood. Wanted to go somewhere nice. At Bandra. K returned and we headed to Bungalow 9, past Salt Water Cafe, at the start of the lane where Cafe Goa and Trafalgar Square used to be. 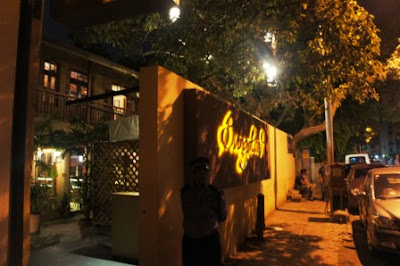 Well Bungalow 9 indeed looked majestic and so non Mumbai. The section outside looked really chic. I had booked a table inside for the aircon. The indoor seating looked a bit like the geriatric section with families across generations spread all over. We looked wistfully outside but slowly reconciled to the grand, Royal Bombay Yacht Club like feel of the place. The peeling paint in the ornate setting a reminder that the monsoons of Mumbai spare none. The overall grandiose feel defiled a bit by the kitsch plywood bus tables at the corner. The sofas sink in and comfortable though a tad difficult to eat from.
The table so huge that it seemed that K was at Bandra while I was at neighbouring Khar as we faced each other and sat.
I felt closer to the mosquitoes buzzing around us. 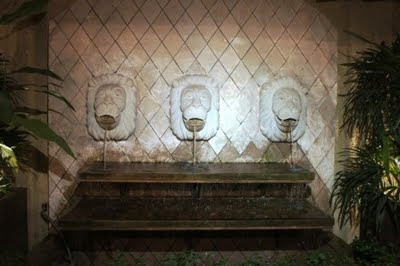 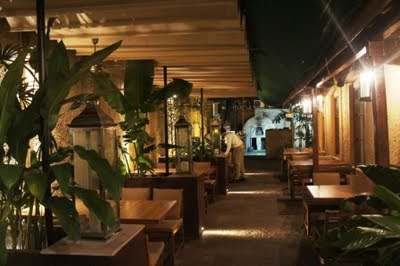 So how was the food? Well to start with I skipped most of the Asian to give them a fair chance. Didn’t want to bring out my hormonal lovelorn hat.
I ordered the Snowdonion cheddar and red onion tart at Sassy’s reco. This was the most full flavoured baked cheese dish that I have had since I had my first cheese quiche at Switzerland outside Geneva station. And that is saying a lot. 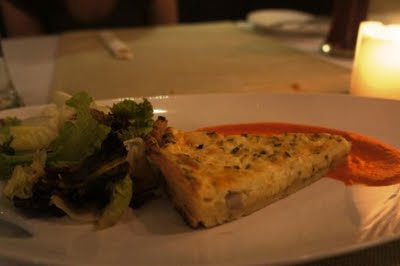 The dish an epic comeback after the disappointing flavour and sugarless black currant ice tea and fresh lime soda sweet without ice.
We went for a Sake Salmon sushi after that. Again possibly one of the best Sushis that I have ever had. Good fresh fish and well flavoured rice. 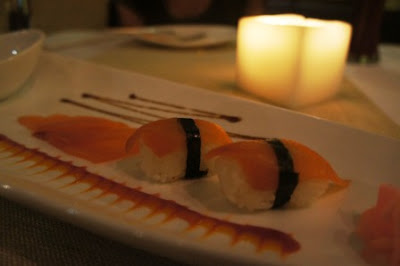 K liked her mains of grilled lobster. I thought it was tad overcooked but I loved the zest of lime in the background. At K’s request they removed the buttered greens and gave her mashed potato instead. There was a smart serving of noodles to go with this. 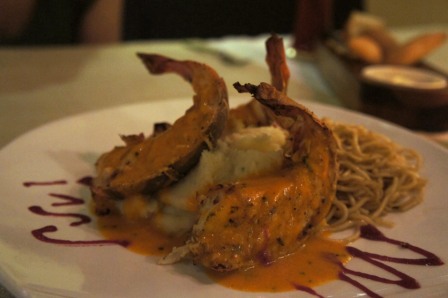 I was feeling  indulgent and went for my own mains instead of sharing one. I chose the slow grilled New Zealand lamb chops. K was unimpressed but she wasn’t in a meat eating mood. The dish lived up to its billing for me. The juiciest cut of meat that I have had since the Wagyu steak at the Meat and Wine Company, Sydney. Done to perfection, medium rare with a tantalising moist touch of sweet in the distant background. I chewed on each little piece with a silly ‘morning after’ smile. Going after the last bit of flesh off the bones with my knife and fork without a second thought to table manners. Big hearted meat paired with some delicate couscous and a rather well behaved ratatouille. This was the standout dish of the evening for me. 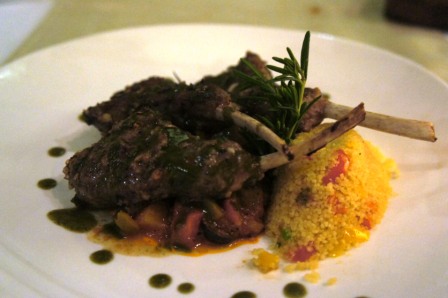 On asking we got a second helping of the complimentary bread basket with our mains. The bread was really good. Nothing turns me on like good bread. Butter with sundried tomato pesto fired things up and I have rarely seen K attack carbs at night with such gusto. 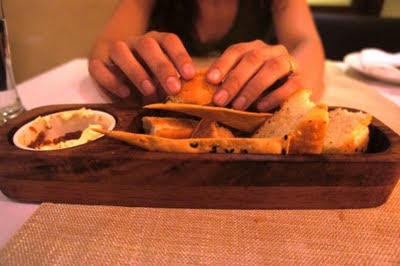 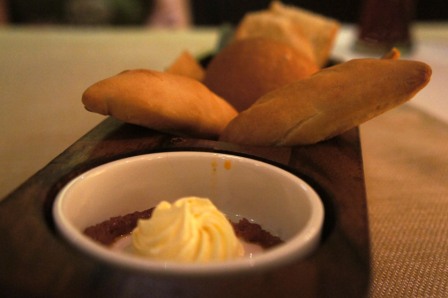 For desserts we went for the heart warming solid house Madagascar chocolate ice cream. They seasoned it with a touch of salt and olive oil which bewitched me as I like of mix of textures and tastes in my mouth. K got a bit livid. She doesn’t like people messing with her chocolate. “No Salt. No chillies” as she said. 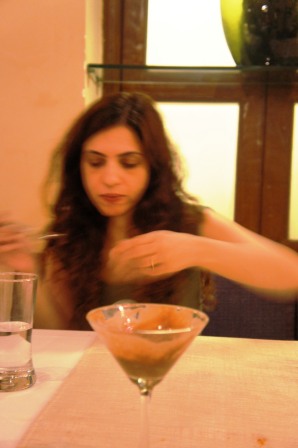 The service was very knowledgeable and warm. I must make special mention of our waiter Omkar. He could answer my questions on the menu in great detail which helped order right. He went to the kitchen and got the chef to accommodate K’s request of a few sashimi slivers instead of sushi and mashed potatoes with her lobsters. We felt well cared for.
There was a ten per cent service charge, a heft amount, so I didn’t tip any more.
The bill was huge. K was a bit underwhelmed by the experience after she saw the damages. But I was in a generous mood.  It had been a good day.
All under a golden glow of yellow lamps . Eaten on sofas you could tuck your feet on and eat. And chat. And unwind. Mosquitoes giving you company. 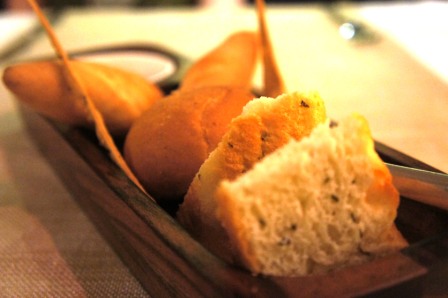 Sassy Fork said…
Lovely place! Good food and service!They ought to do something about the mosquitoes!
I think your bill was huge because of the two great mains: lobster and lamb chops,else it wouldn't be that much.
Enjoyed this post...had a nice flow to it!
23 April 2011 at 06:51

Gastronomist said…
This comment is after reading the first two paragraphs of this post (couldn't wait). I too have been a victim of the crap served at Red Zen (albeit in Gurgaon). I was actually shocked when I read the rave reviews of Red Zen from your fellow bloggers about that same meal. Thank you for calling a spade a spade!
23 April 2011 at 15:50

Kalyan Karmakar said…
@Sassy, good point. Would have saved us a thousand bucks at least. But we didn't have alcohol so balances out. Not a cheap place

Kalyan Karmakar said…
Well Scarlett you gave me my opening for my latest post
24 April 2011 at 22:18