I am worried that someday 'Finely Chopped' will become 'Gently Served'

There was a time when I loved buffets. Food. Lots of it. The more the dishes the merrier. Every item would be happily ticked. Unlimited booze to go with unlimited drink and the buzz would be euphoric. Forget the bile around you.
I was in my twenties.
I have put on many kilos since then. So I can’t say that I don’t like ‘lots’ of food. But buffets don’t work for me. I prefer eating one or two dishes at one go and savour them in their fullest glory. Add to these visions of congealed food lying in buffet trays and Bourdain’s bare all stories in ‘Kitchen Confidential’ and I whimper in a corner searching for a live counter for comfort at buffets. In fact the only buffet that has stood out in recent memory is the brunch at Olive. Global Fusion of course. The rest would be a haze of very forgettable recycled food.
The only time I suggest buffets is when I am going out in a group where the objective is not necessarily to just have good food. Like a work outing. That’s when you have a cap on spends. Everyone finds something or the other to eat in a buffet. You don’t spend hours mulling over the menu trying to appease everyone. When there is more to the occasion than just the food.
We went to the Mainland China Buffet at Andheri West, Mumbai, near Infinity Mall, the other day. They gave us a separate room when they heard that we had around fifteen people in our group. Which was just perfect. The mood changed from ‘finger on your lips’ to a ‘million giggling girls’ once the phone camera came out and everyone started photographing each other. The setting was perfect for a nice celebratory afternoon. They also had an ‘eat four get one free’ sort of thing and would be a good location to look at for these sort of do’s.
The service at Speciality Restaurants, of which Mainland China is a lead brand, is always quite warm. On seeing me take out my camera the folks serving the starters at our table would come and get the tray to me first to photograph. Not like some other places which get a bit antsy if their food is photographed. What those guys don’t get is that the chances of spreading the word about them increases this way. 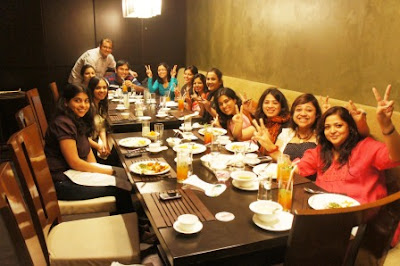 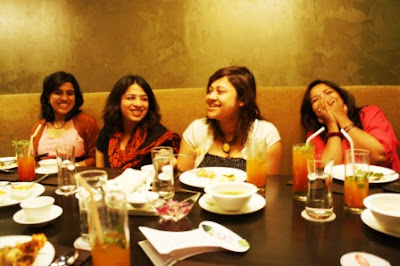 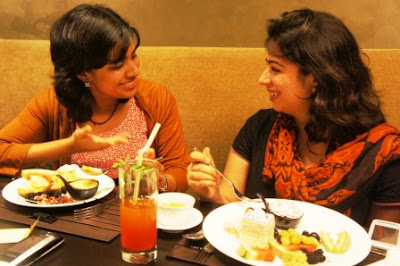 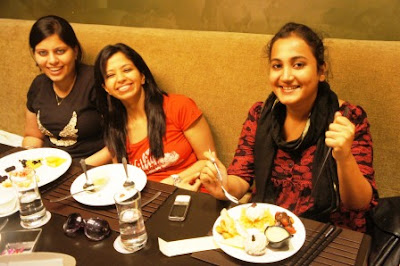 But then that’s Mainland China. They are probably one of the first, if not only, Indian restaurant to come up with a recipe book. They obviously believe in co-creation rather than secrecy.
The array of starters continued and some Mainland China buffet regulars in our group felt that this was thanks to the camera. 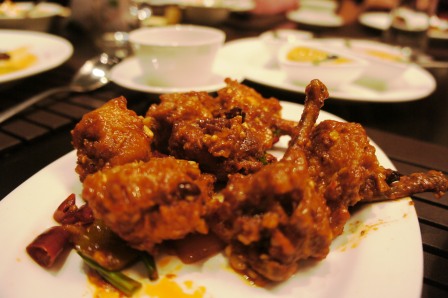 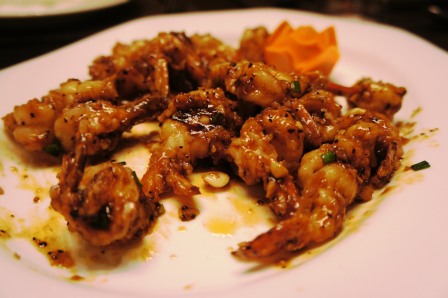 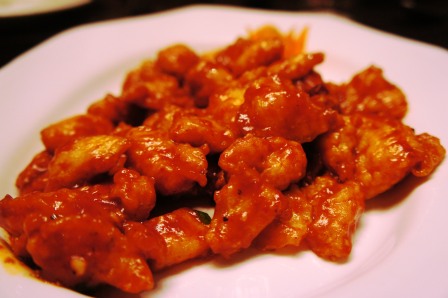 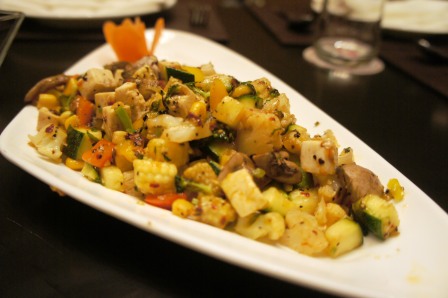 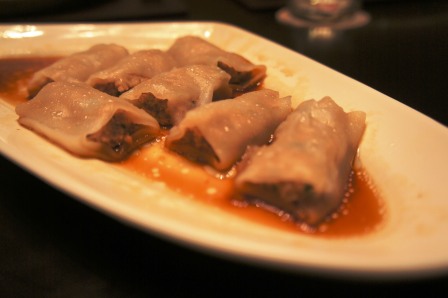 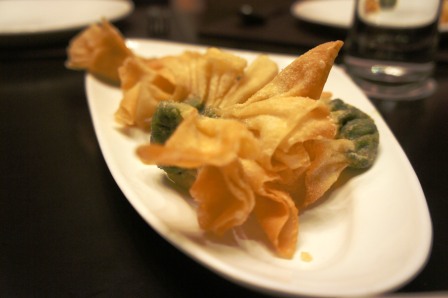 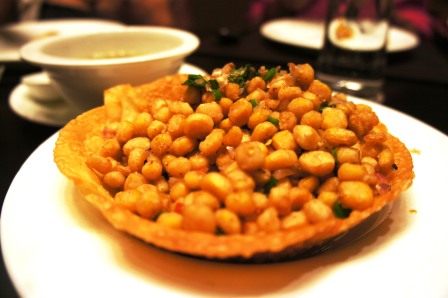 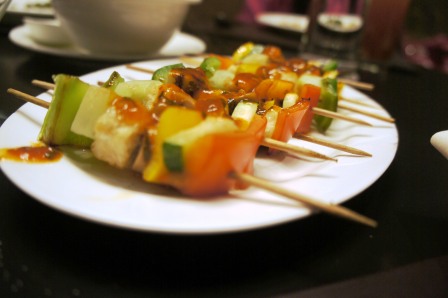 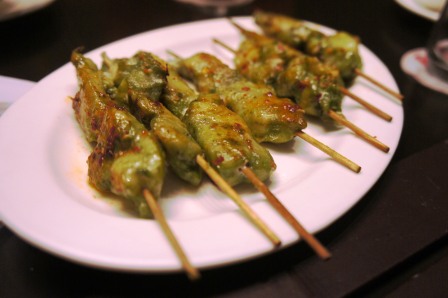 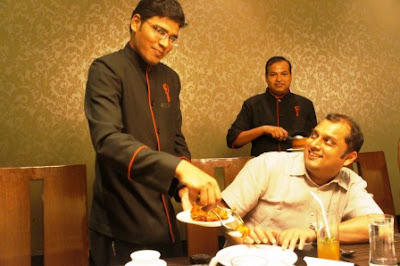 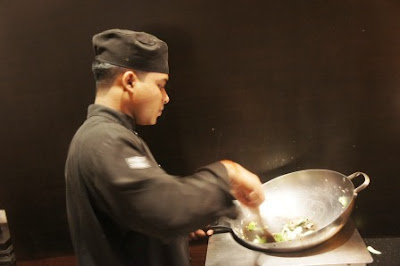 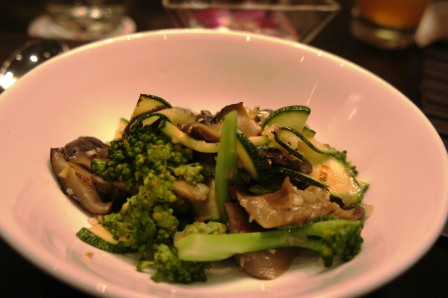 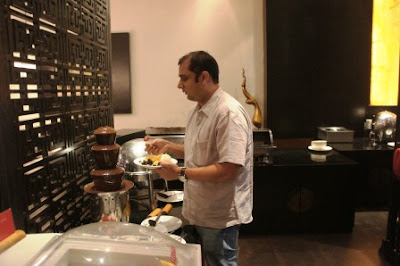 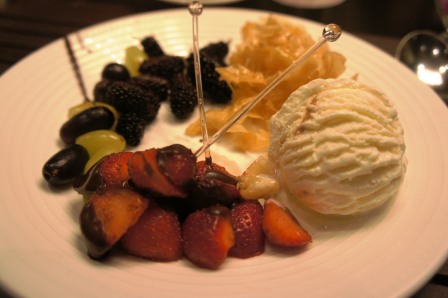 Well there was soup, starters – Red, White & Blue - and fried, stuff in buffet trays, a live vegetable (!) stir fried counter, a chocolate fountain and clammy desserts ... and a barrel full of giggles which made it worth it.
The giggles continued as we went to The Cafe near by. The folks in our team just loved the design and look of the coffee shop – white walls, wooden pillars, witty posters, very nice loo – everyone started taking pics and I felt pretty proud as my friend Jyotika was involved in the design of the stores through work. 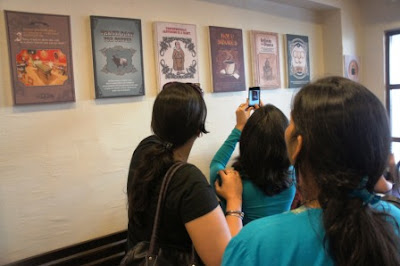 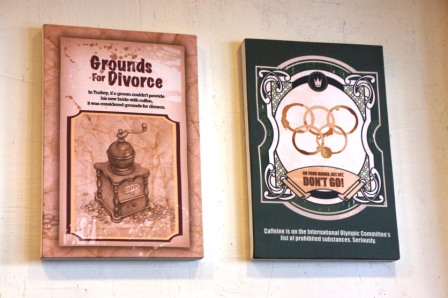 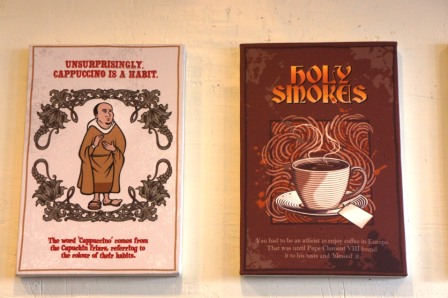 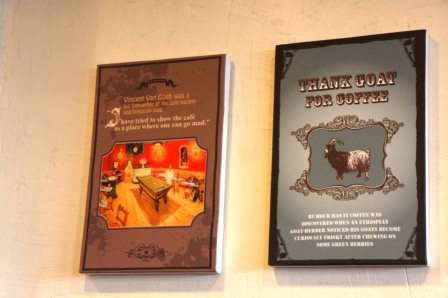 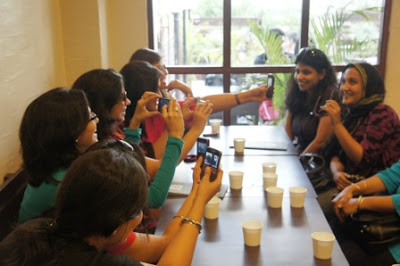 The giggles continued though I gave in finally and made my way home. The day was still young. There was dinner at Andheri E and while I love travelling when I am out of town, I am a sloth when at Mumbai and even the scent of food cannot move me.
It was a day where I went to a restaurant which claims to serve ‘authentic Chinese’ food and yet served food which reminded me of nothing that I have ever eaten out of India. It doesn’t keep pork or beef on its menu.
I went to a coffee shop and ordered a cappuccino with a ‘Costa Rican’ blend which tasted worse and weaker than even than the worst coffee dished out in the canteens of corporate India. And I asked for a strong coffee!  I sipped on a ‘Turkish’ coffee which was more watered down than anything I have ever tried at Istanbul.
And at night I went to a five star where their ‘Asian’ restaurant dished out fare for a set of food groupies which included a rather dense Tom Yum Kha (Tom Yum soup with coconut milk), vegetarian ‘Thai’ green curry and took ages and three waiters to get me a some fish sauce and split bird’s eye chillies for me to sanitise the curry, the world’s first ever egg, fish oil and crushed peanut less Pad Thai noodles and the first Thai soup which had button instead of oyster or shitake mushrooms. Well, it takes courage to serve dumbed down food to a group which included people who some would say are obsessed with food.
The more I try places that serve ‘ international’ cuisines at Mumbai, the more I believe that we deserve the chicken teeeeka masala of England’s Bangladeshi ‘Indian’ Curry Houses.
It's Karma.
coffee shops From the hip Oriental The world of blogging

Unknown said…
Sorry the coffee was not good. I think the problem is in maintaining consistency. I also dont think these places have trained baristas- such a must in the initial stages of a coffee shop.
As far as the restaurants, I wonder if our chefs are just not brave enough to go all out and be authentic. Im not sure why use button mushroom instead of good baby aubergines.
Thank you for the design mention. The photos are really cute of your colleagues clicking the pics. So happy you enjoyed the space.
10 April 2011 at 01:11

My problem with 'they will get better with time' is that the prices are at their prime right from the beginning...of course not your fault :)
11 April 2011 at 11:45

Chinmai said…
Loved my first experience with Chocolate fountain at Mainland China..
I agree with your review of the coffee..though after stirring it well it became better..but still tasted like anything at CCD..i think it is time coffee shops served actually what they write on the menu and not something which often is ''paani kam''
11 April 2011 at 14:28

Plus those and the famous coffee shop pout would have disturbed the family audience according to the research reports ;)

@Chinmai, strawberries in the choco fountain was good fun.
My point on place offering global also includes their being able to educate the rest of us who have not had the exposure. I remember going to Tetsuma once where they were not really guiding us through the menu which was quite alien then. Very different from the Mexican Mamasita at melbourne

Unknown said…
is this some all girls group? or are you all friends?