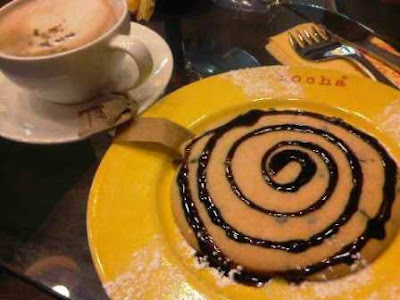 The omelet was stuffed with mashed potatoes, herbs and again barely visible bits of salami. A nice hearty feel but completely lacking in salt. Not that they asked for our BP reports while taking the order. 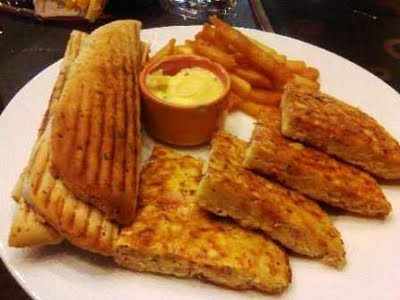 Our BP did go up thanks to the ciabatta bread slices that came with the egg. Toasted to biscuit-like consistency. It was inedible and K wanted fresh soft bread. Repeated pleas which went from polite requests to angry outbursts, two waiters, expressions of intent to pay for the extra bread, twenty minutes of teeth gnashing finally got us a plate of ciabatta slices at Rs 80 extra. This batch was softer, toasted again and frankly would have been appropriate at a prison perhaps where survival is the key. 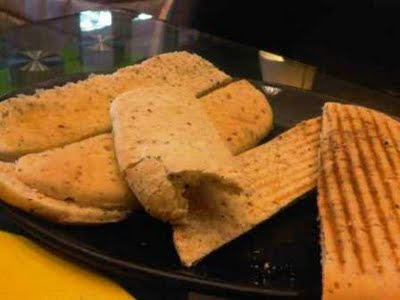 Well after three days of being AWOL, Bunkin Banu is back. I am looking forward to some bhaat, bhaaja moonger daaal, alu bhaaja and begun bhaaja to comfort me after the disastrous breakfast.

Perhaps I should have skipped the coffee and gone for the wine and alcohol list that they were trying to push us at Mocha Mojo. Pity it was breakfast.

But I will be back. For the waffles.

The food at Mocha Mojo was disappointing today as was their cold reaction to our obvious discomfiture. They included a ten pc service charge to their bill and K tipped over that.
Tthere was a ten pc service charge at our dinner at Bungalow 9 the other day. The service was really good there. I didn’t top it. The amount was large enough. I threw up the topic for discussion on the Finely Chopped Facebook page. This is what followed. Would love to hear your take?

Would you tip over and above a 10 pc service charge added to the bill?

Sue said…
yep - we were there this morning/afternoon sitting on the table beside you actually (but didn't want to interrupt your bank holiday brekkie) and it was all pretty bad at our table too. None of the usual staff in there this morning so perhaps that had something to do with it??
22 April 2011 at 17:34

Kalyan Karmakar said…
Didn't guess it was you Sue but come to think of it you guys did look a bit grim. Should have given us a shout.