I wrote this post on the 29th of March while flying back from Sydney. With a trip to Gurgaon sandwiched in after I returned. I stayed back with my lil bro & my lil sis in law made a fantastic biriyani. I returned from their huge Doll House (can’t think of them as grown ups) yesterday but was too fagged to open my comp. But here I am again with my friend Sassy Fork egging me on asking me to write.
Once again I am writing a post on a flight. This time as I head to Singapore from Sydney on my way back to Mumbai.
My neighbour is George. A doctor from Sydney. He is off to London for a conference. He loves to travel and loves conferences for that. He loves food and cooks at home. He experiments with different cuisines and often makes Indian when he entertains. His family is of British origin. To him Mid Eastern cuisine is what Far Eastern is to me.  Loves to eat cheese. He doesn’t like watching horror films. He is very interested in society and culture. And took charge of my supper  when the steward came to take our order and was suggesting what I should eat. He has high cholesterol and beats it with a pill. And loves his meat.
Have I met my alter ego? Were we separated at the Kumbh Mela as kids? Or at the Scarborough Fair?
Well what a fantastic last day it was at Sydney. A lot of Aussies had suggested that I  should ‘climb the bridge’ when they heard that I was going to Sydney. Now that’s not the sort of thing that a respectable Bengali gentleman does on a holiday. But I did walk across the Harbour Bridge today. Armed with a water bottle. I had checked with the folks at Vibe, the hotel I was staying with on the time it would take. The Caucasians knew how long it took while the Asians had to look up the net. Not a very active race are we?
Well the walk tall about half an hour as they had told me. The weather was perfect. Not too sunny. Not wet. The views of the Harbour, the Opera House and the sea were amazing. It was almost as if the Opera House had dressed up to pose for me. I was not alone. There were tourists, school students and  serious joggers going past me while the other side of the road was for the cyclists. 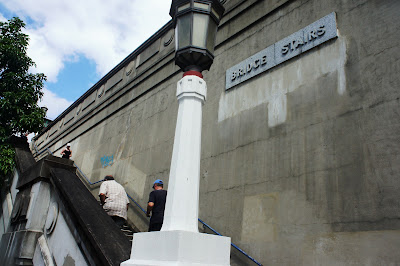 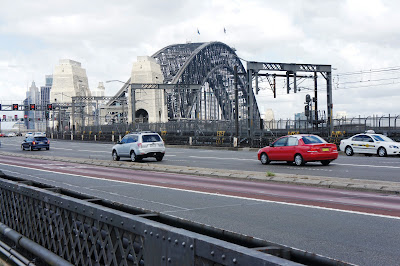 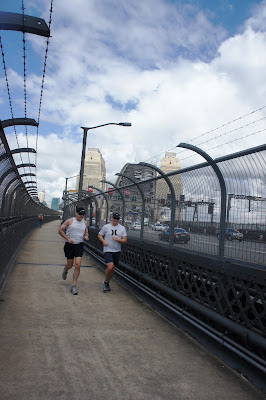 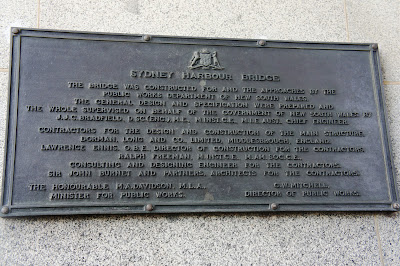 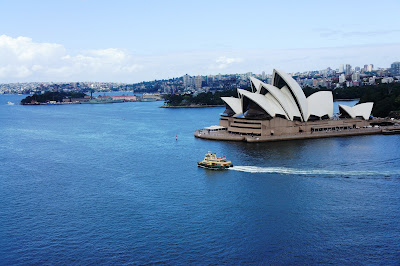 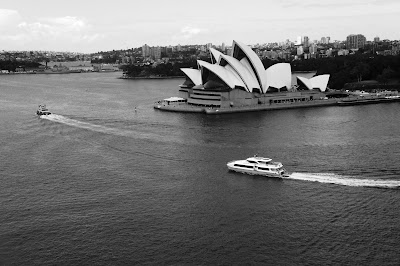 Well my walk wasn’t entirely without an ulterior motive. I was in search of a Sydney icon called ‘Pancake on the Rocks’ strongly recommended to me by my friend Ranjit. His earlier recommendations of Mamasita at Melbourne AND Meat and Wine Co at Sydney turned out to be very good bets.
I was armed with a page from Google Maps that the enthusiastic boys at the Vibe gave me the previous day. I walked down the cobbled paths of Rocks which I fell in love with the day I landed at Sydney. Lonely Planet refers to the Rocks as faux, sanitised ‘Olde Worlde’ as it has been restored but give me this over steel and chrome any day. That’s the thing about Australia. They know how to harmonise the past with the present. Unlike a Shanghai which bludgeons away its history. Or Mumbai which doesn’t really know what to do with places like Fort and leaves it uncomfortably at a corner like an aged parent and a busy child. 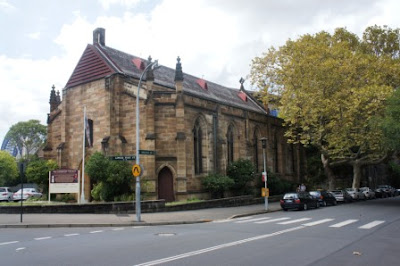 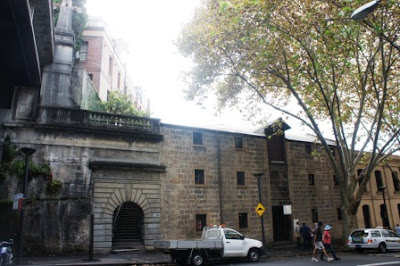 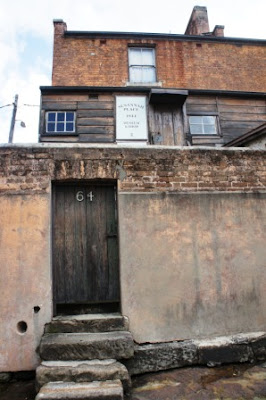 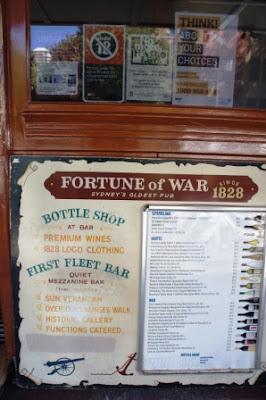 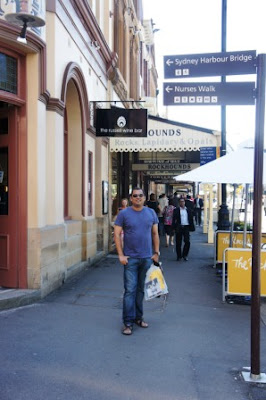 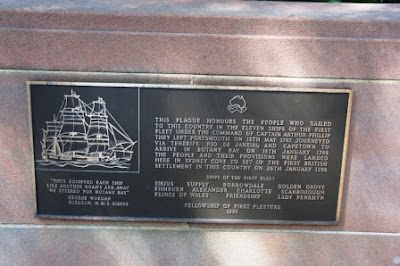 I finally found the object of my search thanks to David who was making candy for a wedding that evening. David’s candy store at Rock’s is ten years old and he has branched out now. He has been to Mumbai a few times too. His assistant gave me a piece of fresh strawberry candy to taste and boy was it fresh.
I was helped in the last leg by the genial, elderly owner of a sleepy Irish Pub. After all they don’t make it easy for you at the Pancakes on the Rocks. If you want pancakes you have to seek them out. For Pancakes on the Rocks wasn’t on the roads. It was INSIDE a building called Metcalfe.

The folks at Vibe warned me about the crowds at Pancakes. I was lucky to beat this by a whisker. I saw a queue forming soon after I sat down. I opted for the ‘Aussie Sunrise’ as suggested by David’s assistant and a cappuccino to go with it. And what a breakfast it was. The best bacon I have had in a long time. Fried eggs. Fried bananas and pineapple. And three pancakes stacked on each other. A little pot of Maple syrup to pour on them. Take a bite and you will forget every pancake you have ever had in your life. And the shop was set up a year after I was born. Waiting for me to come over one day. The consistency, the warmth, the sweetness of the pancakes. The zest and chirpiness of the syrup ....   this was Australia in sum. Couldn’t think of a better taste experience to leave Australia with. 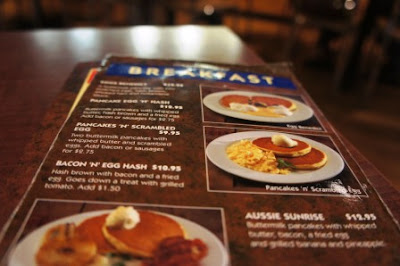 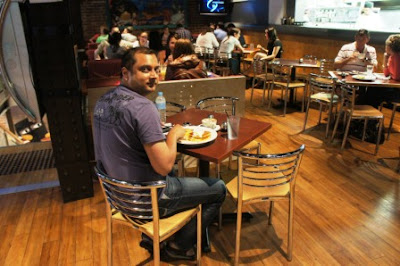 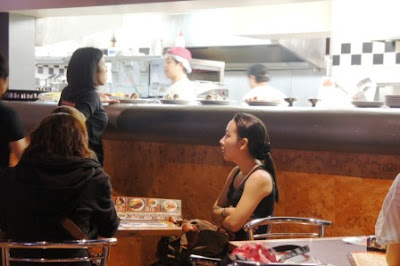 And the cheerful send off from the boys and girls at The Vibe, ‘come again’ they said. The smiling Turk cabbie, Zakir , who drove me to the airport. I couldn’t have left in a happier mood. As I looked out of the tarmac through the window of the plane, the words of Pauline from the reception of the Vibe, echoed around me, “You must come and stay with us again”.
I loved Australia but felt its warmth the most within the energy of the grey yet sunny Sydney.

bongopondit said…
Really enjoyed the write-up and the photos. I lived in Sydney for about three months and used to love walking around the city, especially the Rocks area. There is a French patisserie there, where I have enjoyed many a crispy croissant with a cappuccino.

We actually lived in various parts of Australia for a while and found the quality of their food, and more importantly, their coffee, to be much superior to what we get here in the US.

We were back there for a vacation last year and you might be interested in our photoset of all the gastronomic delights from there: http://www.flickr.com/photos/bongopondit/sets/72157625023959454/
(apologies for the self-promotion :P)

Do keep writing and photographing more of your foodie experiences.

Scarlett said…
Finally a post on Sydney! Yay!! I must take tips from you soon :)

Great to see you here Bongopondit. Completely agree with you. The food and produce at Oz is something else. I am sure you are missing it. Seemes like the real Eden Gardens

@Scarlett: the folks at Oz are extremely friendly and welcoming and love it if you love their country. The stress the fact that their's is an egalitarian culture and if you ask me the warmth and easy going nature of Master Chef Australia sums the country up beautifully
4 April 2011 at 14:04

Kunal said…
Great post on Sydney...No wonder they call Oz the"Lucky Country"...we aren't just lucky to have the sunny beaches...but so lucky to have the excellent fresh produce that our markets are bursting with...and the people from all over the world who have settled here make it really special...I'm really lucky to call Australia my home..although still very much an Indian at heart.
4 April 2011 at 15:11

Kalyan Karmakar said…
I guess people make their luck Kunal. Australia deserves it. Question is will we do that in India someday?
4 April 2011 at 19:09

Scarlett said…
They've sent me a 2 page document on the importance of egalitarianism and respect for all individuals in their culture!!!
5 April 2011 at 11:48

Kalyan Karmakar said…
Well they take it pretty seriously unlike at India
5 April 2011 at 14:32