Eating with the enemy & thoughts on neutrality in food blogging… EATC, Bandra

on May 23, 2011
So Australian blogger, Lorraine, of ‘Not Quite Nigella’ gets to interview Bourdain not once, but twice. In fact her blog first caught my attention when I chanced upon her first interview of him. Well some people have all the luck. As far as I am concerned, I continue to play Eklavya to Bourdain’s Dronacharya. A story from the Mahabharata of the tribal boy who stood outside the perimeter while Dronacharya coached the royal princes on the art of warfare. Trying to learn from the teacher who was oblivious to him.

The interview talks about Bourdain’s latest book, “Medium Raw’, which Bourdain signed during his trip to Sydney. I bought it when I was at Malaysia last year.

One of the topics discussed in the interview is the issue of ‘selling out’ which Anthony Bourdain speaks about in Medium Raw. Lorraine says that in one of his talks at Sydney Bourdain “also calls himself corrupted in that he is friends with so many chefs in New York that it would make it impossible for him to be a food critic. He tells us that his palate is corrupted and that he himself is sick of truffles.”

Well, I am light years away from knowing ‘all the chefs at Mumbai’ but at one level do get a sense of his discomfort. As I get to know people in the business, become their friends, I do find it difficult to Finely Chop things with the élan of yore. Something I am trying to live with. What a rather agitated young reader, friend and who is in the food business herself sarcastically described as ‘the fine line’ she was sure I had to maintain.

I cannot deny that there was some truth in what she said. It is a fine line. A fine line I faced twice this week. And I was not very comfortable with it. This will only increase with time. Not just with respect to restaurants but for fellow food bloggers too.

Luckily today was easier. We found ourselves at a spontaneous lunch with Sassy Fork and her cousin with K at EATC. 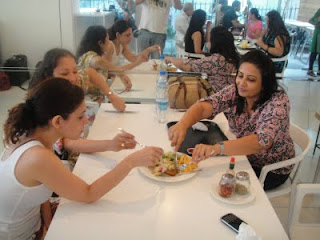 Chetan, the Head Chef of the group that owns EATC, happened to be around. I had met him when I had come for the food tasting during the opening at EATC. We caught up again this time. This ended up with Chetan giving life to my dream of a pizza with hummus, feta, sun dried tomato and olives. Chetan made the pizza himself and I was thrilled with the way it turned out. I told Chetan that he should probably introduce it on the menu and name it after me. Chetan diplomatically rejected my suggestion by pointing out that it wouldn’t remain ‘exclusive’ for me then. 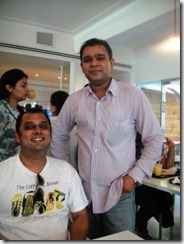 I have never had my camera in my earlier trips to EATC and took full advantage of Sassy’s camera to click some of the food. Took the following pictures with her camera. 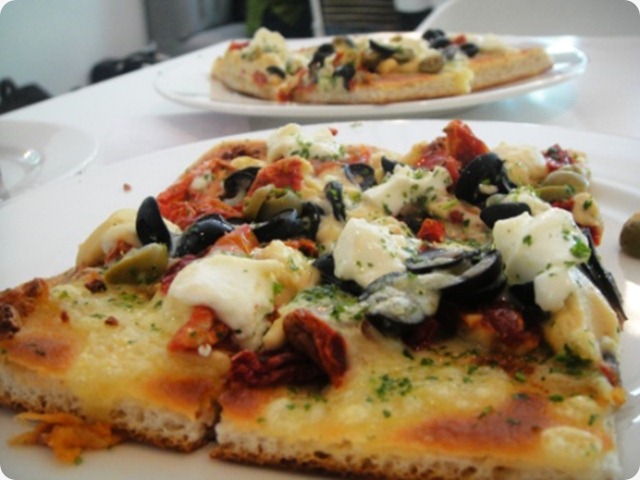 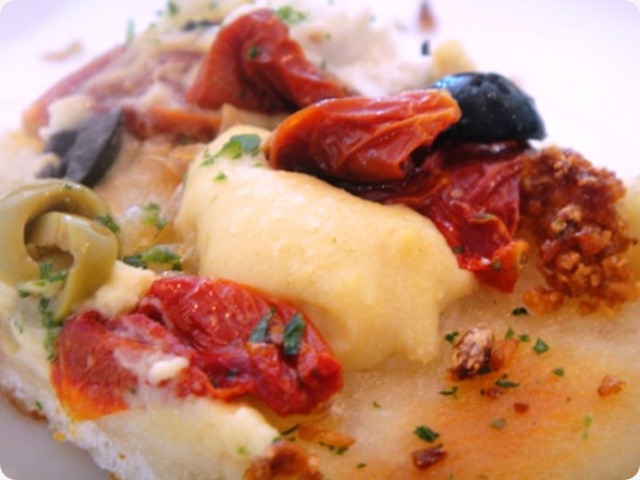 The girls chose freshly tossed salads. The salmon in the salad was respectable and stately, a very fine cut of fish. The other salad, smoked chicken,  was so well flavoured that it managed to liven our chicken jaded palates. The multi grain tuna sandwich was well balanced, indulgent, very fresh and bouncy. 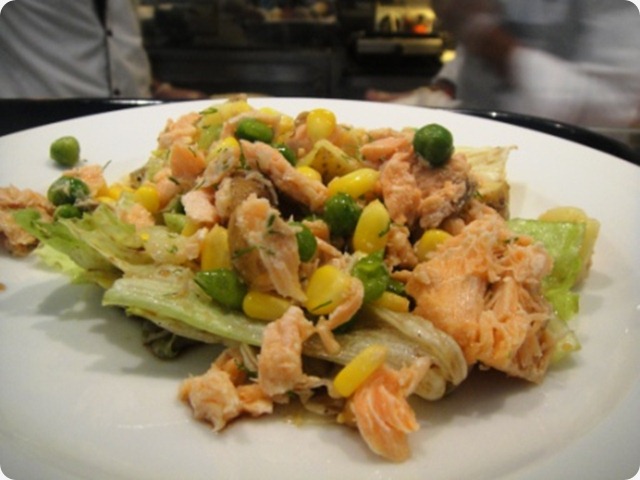 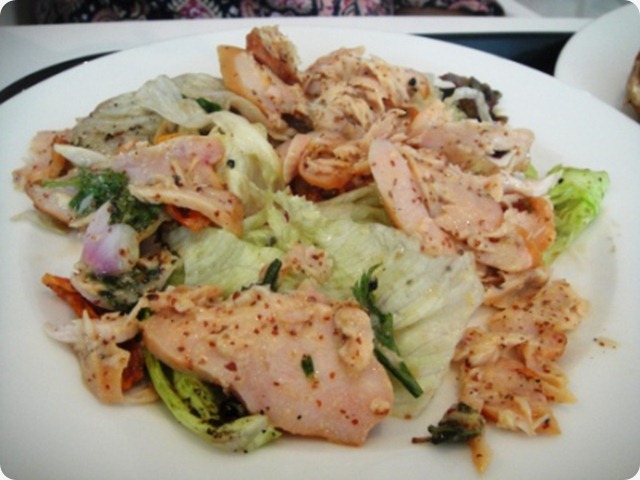 The cappuccino had a backbone which is so rare to find in the limp coffees you get these days. The peach tea made K’s eye brows shoot up with delight. For dessert we tried a baked lemon cheesecake which was perfectly balanced, not too sweet, very well bred. The orange yogurt in contrast was over flavoured reminiscent of the the painted women of the novels of Somerset Maugham. 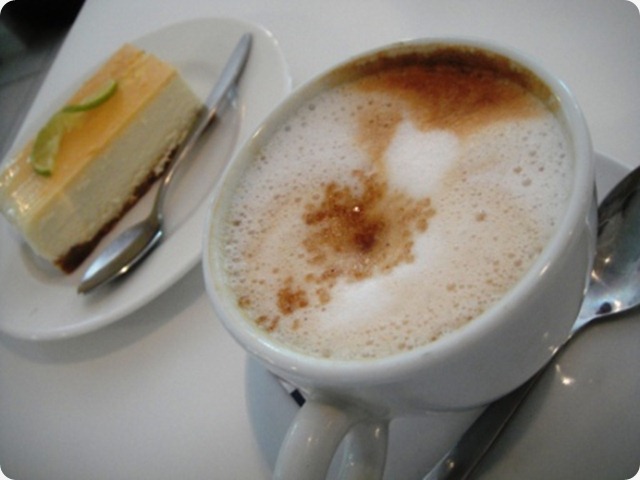 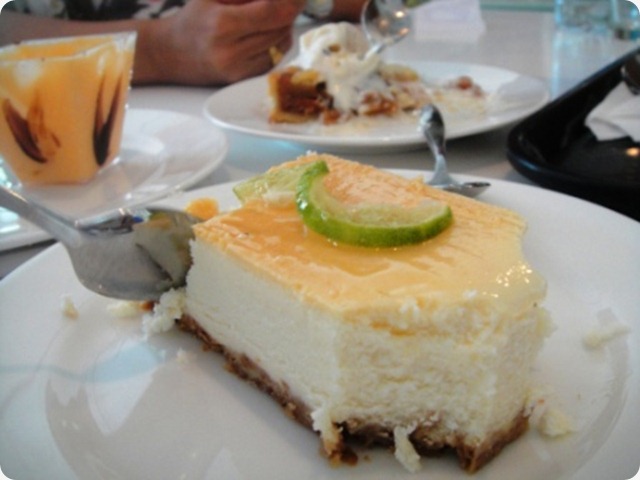 And then came the ‘compliments of the chef’. An apple pie which was a new addition to the menu. I am apple pie fan and this was one of the best I have ever had. Everything was right. The taste. The consistency. The proportion of fruit. The pie gave me pleasure as Peter Griffin would say in Family Guy.

When I could occasionally snatch a bite from the girls that is. 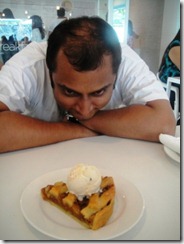 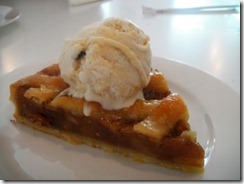 Chetan sent a scrambled egg on garlic bread for us too. We were full but ‘bring it on’ went Sassy.

The consistency of the eggs, the slices of sausages, the crushed pepper, the buttery magnificence won the girls over and stuffed tummies were forgotten. I must say that I found this a tad salty and would rate my pizza, the multi grain sandwich and the smoked chicken higher.

Well we got our food blogger’s freebies.

Thank God that the food was so good that one didn’t have to sell out. Or fake it.

But for how long?

Have a great week folks.

Sassy Fork said…
When we write,our loyality should lie with the reader.You are one of the few writers who tell it how it is.
Consistency is what's lacking in many restaurants today.When you,Knife, have written that you liked it,there's no doubt that you have.If someone else hasn't liked it on another day,it's possible that the cooking has been different.I just wouldn't worry about your opinions being "bought",ever...
When you are given a dish made specially for you,it is a sign of appreciation for your work,as is in this case.Your opinions are being respected.You are inspiring the creative spark in the chef.
At times a restaurant has had a bad day or just made a mistake.If this happens too often,then it will only lead to their downfall,sooner or later.
Like I mentioned,our suggestions or opinions should be taken seriously not personally like it sometimes is.It's a customer's point of view,what can be more important than that?
23 May 2011 at 06:43

Dipika said…
i was a bit taken aback with the whole cover charge thing at eatc. given the huge walls, the whole thing seemed as if they were trying to say- you guys keep sitting around here with just coffee. we don't want you to.

i'm glad it's gone. JATC used to be those awesone sunday brunch/lunch places. it would be nice to see it regain it's old position.

Kalyan Karmakar said…
@Sassy Fork, thanks for the vote of confidence. The entire idea of blogging is to write from the heart. The only time when it becomes tough is if there are friends involved. In which case sometimes I give them my feedback in private and not in public

@kaevan, true, the mess begins when there is a business angle to it

@Deepika, well you will always be a Diva in my books. I read about the move of platform and may the blog become even more popular
25 May 2011 at 00:51