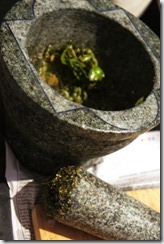 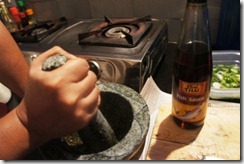 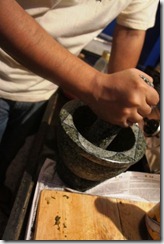 There is something incredibly therapeutic about a mortar and a pestle, Oriental spice and condiments.

I had bought some rawas fillets, a sea fish, from Jude’s Cold Storage at Pali Naka, Bandra recently at Rs 200 (4 USD) for the lot. This fish was fresh and they said was from the day’s catch.

I sautéed some of the fish with South African Peri Peri sauce, SA red pepper and Australian bush salts the other night. The pairing turned out to be pretty good and the quality of the fish excellent. A quick fix dish after work.

Today I decided to cook the rest of the fish in a Thai style. Not from any recipe. But using sauces, condiments and herbs which are used quite a bit in Thai cooking. And the mortar and pestle that I lugged all the way back from Chiang Mai.

I tossed up a quick egg fried rice to go with it. 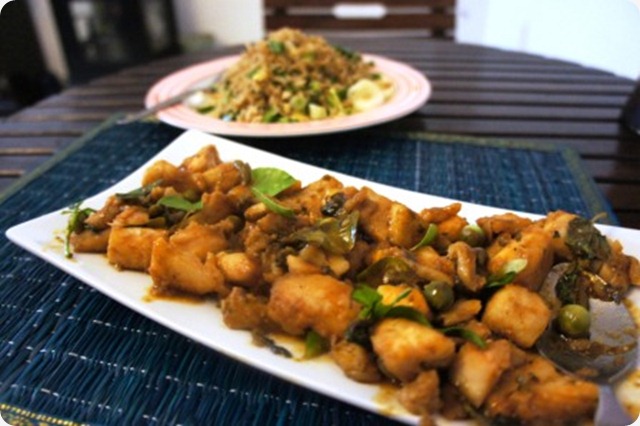 Here are the recipes: 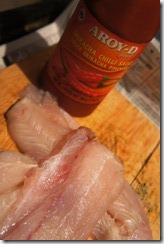 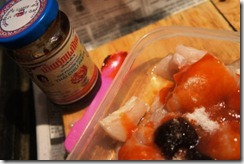 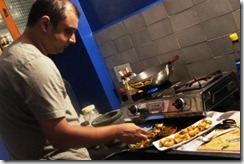 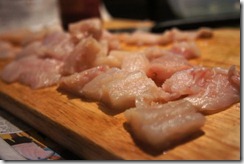 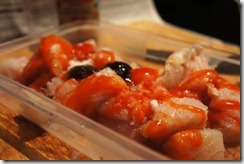 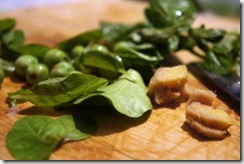 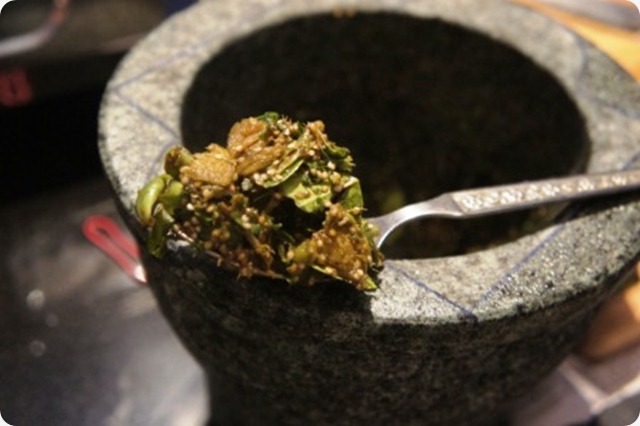 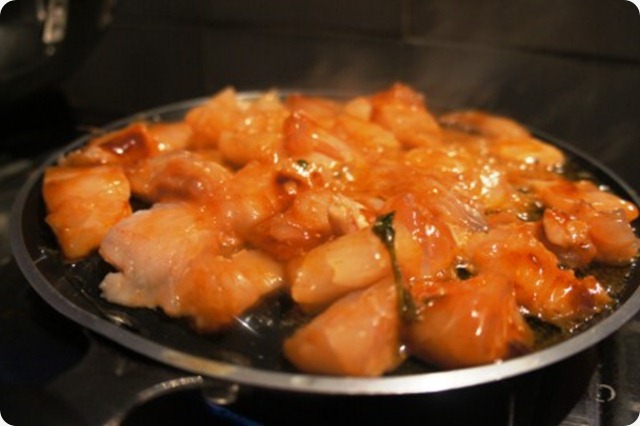 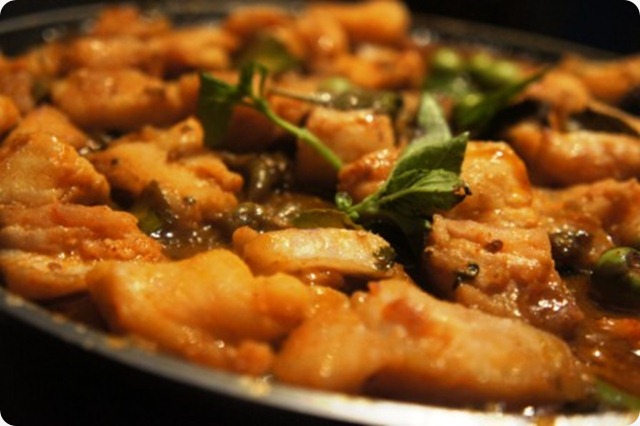 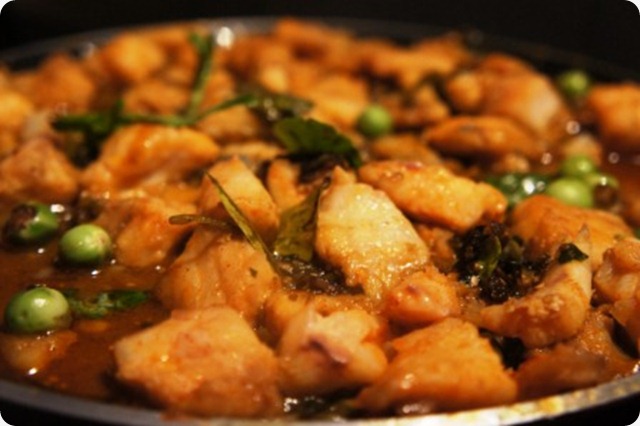 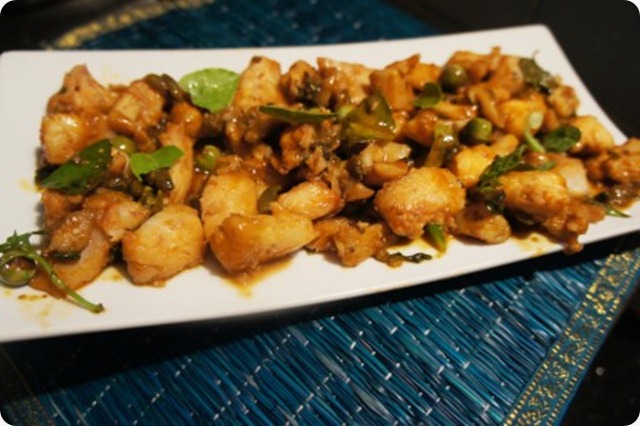 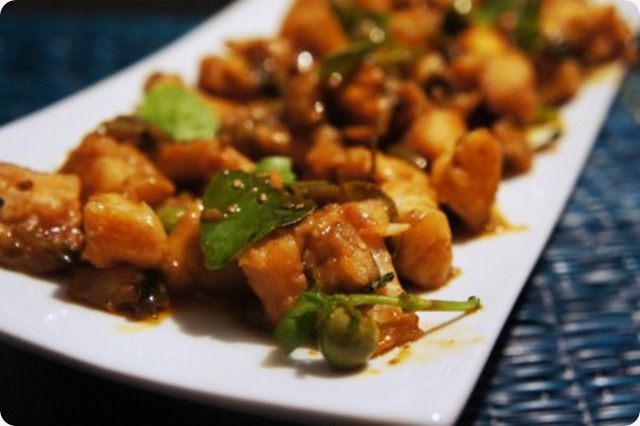 My heart is never into ‘eating’ fish. The small portion that I tries gave me a fair bit of creative satisfaction. K, the fish eater in the family, lapped up the rest even though it was a tad salty. The saltiness was due to adding salt AND fish sauce. Just the latter would do 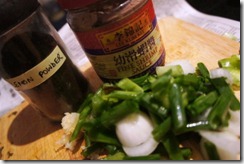 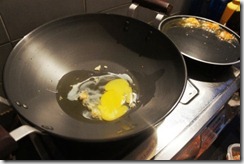 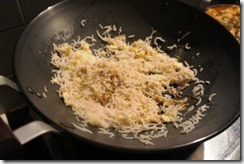 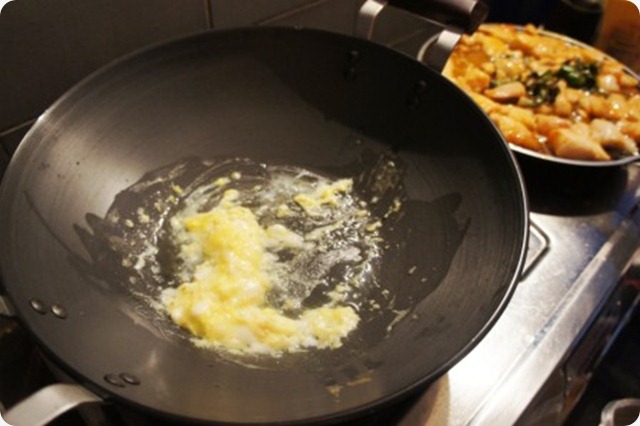 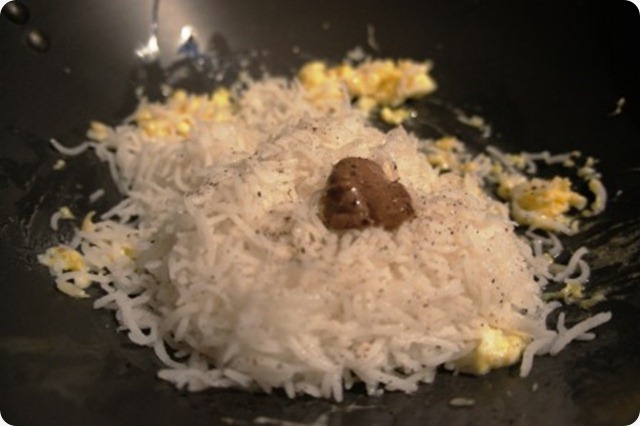 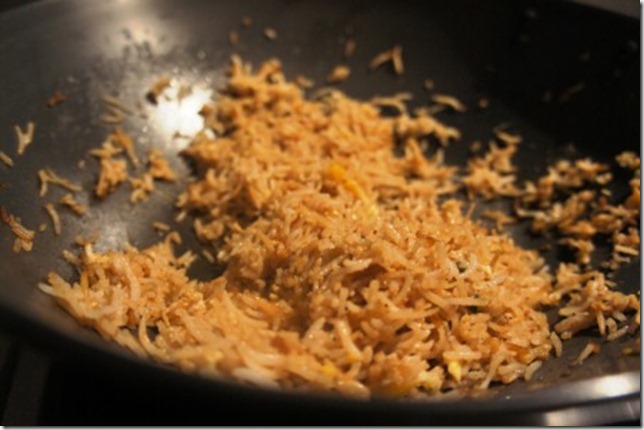 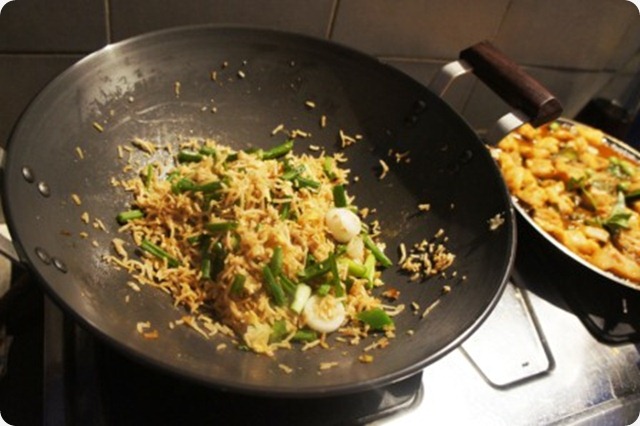 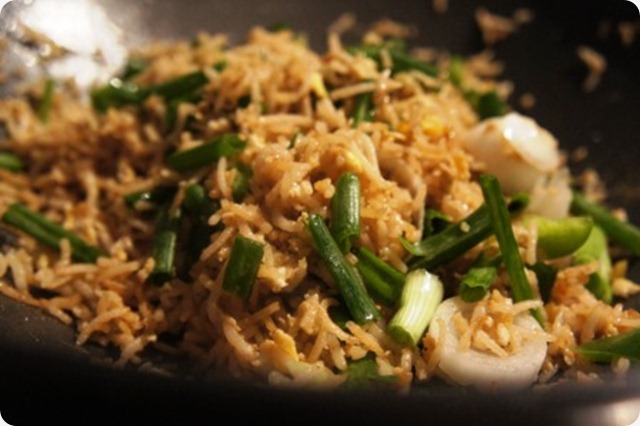 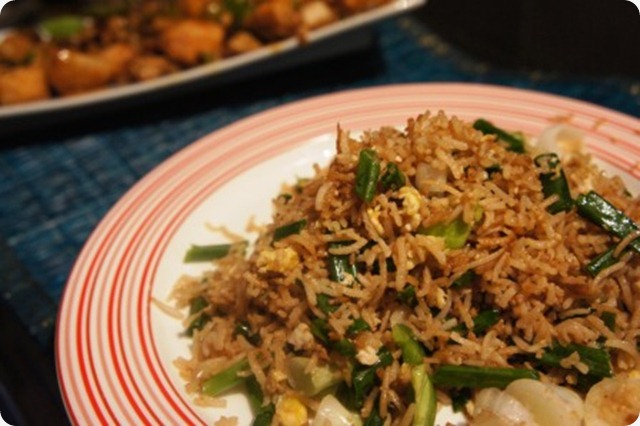 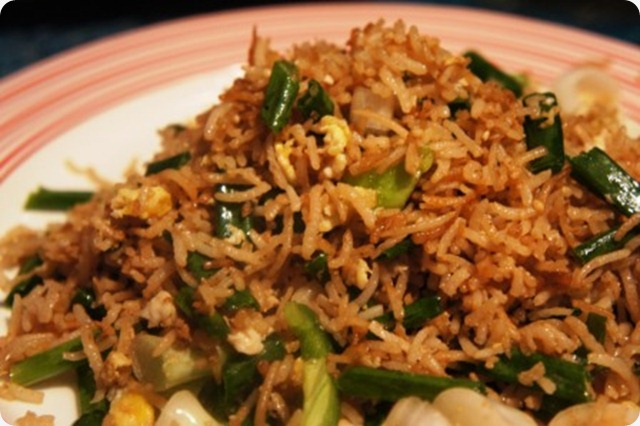 I’ve been making a lot of stir fried Hakka noodles off late as they are so quick to put together. The rice was a nice change.

Saee Koranne-Khandekar said…
That fish looks absolutely yum. I love Rawas, and you've done so well here! I love the mortar and pestle picture, too! And the egg fried rice look perfect with the scrambled eggs and the spring onions.
30 May 2011 at 12:56

Pinku said…
all of it looks absolutely yummy.

btw knife : I would be traveling to Bangkok in June and want to pick up a mortar and pestle - could you please let me know how much ur's cost?

@Pinku, checked with Robyn of the blog/ site Eating Asia. The place to buy a mortar and pestle at Bangkok apparently is Aw Taw Kaw market.

Priyanka said…
The fish looks delicious! This is going to be my next weekend's 'special' menu! Decided!

Reeta Skeeter said…
eeeee!! I am a beeeg fan of lovely looking mortar pestles...lurveee yours.. my mum has a similar one in marble...works very well...my recent purchase was a brown-coloured one used for light crushing from a Thai/Malay(forgotten which one) stall at the international trade fair in Delhi :) As far as the post goes it looks tempting...though me is a vegetarian who loves to know all about NV food :)
1 June 2011 at 10:55

@Priyanka: do let me know how it goes and thanks :)

@Reeta, searched a lot for this mortar and pestle. often wondered what vegetarians do on the blog? Isn't it like adultery or something? ;)
1 June 2011 at 13:19

Lorraine @ Not Quite Nigella said…
The fried rice looks so scrumptious! :) And yes agreed on the therapeutic value of a mortar and pestle!
2 June 2011 at 14:14

Accidentally discovered your blog while looking 4r some food recipes.

Anyways, am a big foodie and like coming to ur blog all the more to look at the food pix and get salivated.

Live in Kolkata and its nice to know you too a Kolkatan.

Scarlett said…
Kalyan, we get such good Thai food here. There are a million Thai places near my office, run by people from Thailand and the food is to die for. I've been eating Thai for lunch since I got here a week ago, even though there are many other kinds of cuisines available! Food in Sydney is really good.

Also, apparently galangal is the thing to use in Thai food instead of ginger. Courtesy MC Australia :D
3 June 2011 at 20:23

Kalyan Karmakar said…
@Scarlett: that's what I like about oz. you have global food cooked by immigrants which make it more authentic than here. Try a place called Spice Siam

I use galangal while cooking dishes Thai dishes from the T. was making do with what I had at home

Miri said…
The fish looks awesome - I am currently out of action so for my birthday ordered (for the first time in 10 years I didnt cook) fish fillets from a lovely deli called Ploof which were marinated in Thai herbs. was amazing. But this is so easy to do at home, I am definitely going to do it next time
10 June 2011 at 19:55