A return to EATC without any cover

on May 18, 2011
I don’t do restaurant reviews, organised by PR folks, for the blog any more. Or product reviews. I do go to the Food Blogger’s meets but I don’t think those really qualify as overt PR. Sometimes you just go to catch up with people or find out what’s happening in the community, specially the gossip.
The last time I went to an organised event was when JATC at Bandra became EATC. I went first for the private tasting and then the launch dinner. That was not really through a PR agency but more because of a tweet from @anaggh, who is a famous Mumbai tweep whom I follow, requesting me to go to the tasting a friend of his was organising. I hadn’t been there since but landed up today as we were looking for a sandwich place to take my in laws.
During the launch they told us that they would be introducing a cover charge at EATC. Sure enough, there was a big board explaining this at the entry and at the payment counter. “An eatery not a coffee shop” it went and went onto explain how they had introduced a cover charge to discourage the coffee shop crowd. Candid, though a bit less honesty wouldn’t be bad.
Now for the four of us that would mean thousand Rupees. I begun to do the mental math and realised that living up to the cover would lead us to gluttony as we would have to eat quite a bit to reach there. One plan was to order what we wanted even if we didn’t reach the one thousand figure and let the rest go waste. But I am too much of an 80s person for that and said we’ll pack sandwiches for the remaining of the amount.
Reached the counter after balancing the books and then got to know that there was no more cover charge! A guy at the counter said that they stopped it because it would upset customers because sometimes they just wanted coffee.
Well, I guess they took the risk at EATC but obviously didn’t have the offer to pull it off. We ended up at Rs 850 odd so 150 less than what the cover charge would work out to. 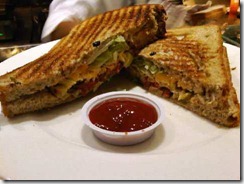 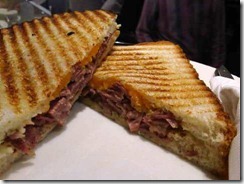 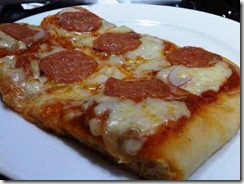 I am always interested to know how the food in an unscheduled visit matched up with a ‘Sunday best’ organised meal. Was happy to see that the food and service lived up to the quality during the launch. Nice peppy lemonades. A ham and cheese sandwich for pa in law which was quite well endowed and didn’t skim on the good stuff. Mom in law likes cheese stuff and the guy at the counter customised a sandwich for us.He changed the feta and sun dried tomato on the menu to a sun dried tomato, gouda, cheddar and jalapeno peppers on our request. He was quite helpful and on the ball. The quality of ingredients was good and the final result very pleasing. We had a pizza size where the crust was thin and delicate in a nice way, the cheese fondly hugged the base and was not chewy at all. It had spread very well. Very thin bite and you miss it pepperoni with some fried onion rings which were a bit out of place.
We ended it with a grape cheesecake which was nice and sharp and was evocative as the strawberry cheesecake one had at the launch. The ice cream range was rather limited though there were plenty of free toppings to make up for this. Pa in law really liked his blueberry ice cream. I was unimpressed. Still the fun part was buying a ‘large’ cup for him when he politely said ‘small’. I knew his heart was not into it and he loves ice cream. We are never too old for ice cream are we? 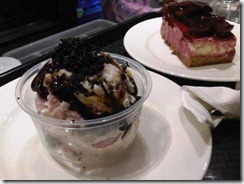 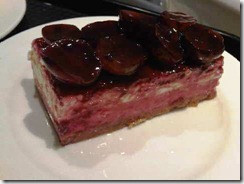 A good score overall but nothing exceptional. Now will someone please tell me why they still have those rude cover charge boards there?
Bandra Bites coffee shops From the hip

hamaarethoughts.com said…
nice tempting specially the grilled sandwiches...
18 May 2011 at 01:37

The Bride said…
Cover charge in a restaurant - what a weird concept! And sad that it was attempted at the former JATC, where I have wiled away an entire day over coffee. Maybe it was the likes of me that prompted it, but really I think in the end they made enough money from us, considering we'd go every day, and order coffee at least (and often sandwiches despite ourselves) and coffee is v.cheap to make compared to what they charge. Anyway, glad they scrapped it.
18 May 2011 at 08:40

Sassy Fork said…
The charm of the place was that you could hang around.So glad they did away with the cover charge!They better remove those boards real soon!Just the Chalta Hai attitude of Mumbai...
Awfully sweet the way you are spending time with your inlaws!
18 May 2011 at 08:45