on May 26, 2011
The story of Mumbai’s mill lands, its mill workers, their life in chawls, the trade unionism that followed and the lock outs have been chronicled by many a historian and of late by Marathi film makers. This is a tale of the Marie Antoinette world of cakes and macarons that have replaced the ladi paos and modaks of yore.

We went to the Tasting Room at Raghuvanshi Mills for lunch the other day. I went there after quite some time. We were at the erstwhile mill lands of Mumbai and were looking for a place to eat after a meeting. My team mates included a Sindhi vegetarian who used to be a non vegetarian before, and and likes trying out new cuisines across the world. And a Malayali who is passionate about food and has explored quite a bit of Europe when she was studying in the UK for a couple of years.

The Tasting Room, with its promise of Continental and Mediterranean fare seemed a good bet given the audience. It is located at the Good Earth complex at Raghuvanshi Mills at Tulsi Pipe Road. I remember it being better than most food options at the adjacent Phoenix Mills. Was happy to see this hold true two or three years after I went there the first time. And I was using my old camera after a while too. (Just saw the post that I wrote in ‘08. Want to hide it once I stop cringing) 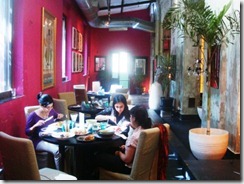 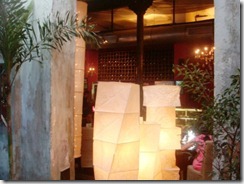 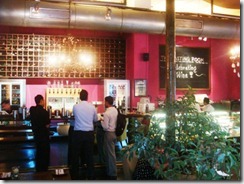 The Tasting Room has a nice hacienda like feel. It is very tastefully done up. Confirms to the images one has of a Mediterranean Bungalow. And as the Sindhi in the group cattily observed, ‘you don’t have to spend money and paint the walls’.

We were there after 2 PM so missed the afternoon rush. I remember that it used to be quite packed during lunch time and we would usually avoid it when I used to work close by.
They add a service charge here but I must say that the waiter earned it as he was not only efficient but also had a strong point of view on our order which added to the experience. He was the one who insisted that we choose a multi grain bread over focaccia for the toasted vegetable sandwich that the two vegetarians in the group ordered. I took a bite of it and quite liked the concept of grilled vegetables with no heavy dressing which all added up to the waiter’s summation of the dish as ‘healthy’. 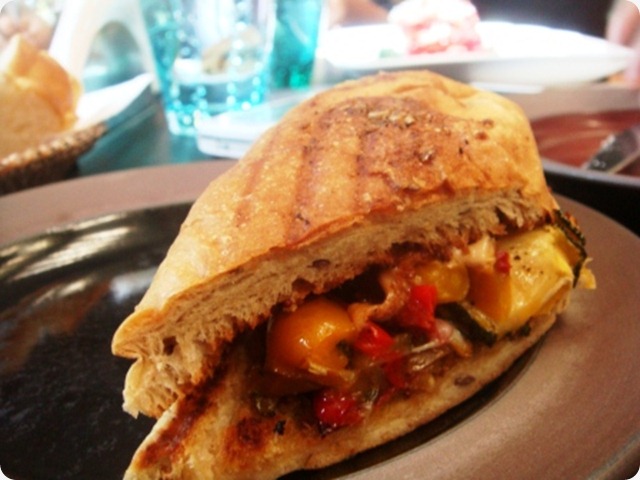 One of our group, a regular here, ordered a watermelon and feta salad. This intriguingly presented dish won me over with its combination of sweet fresh watermelon, salty crumbly feta and woody pine nuts. I later had feta and soft Amex bread rolls when I returned home and then feta was there in one of our mezzes in our dinner at Moshe’s. I love feta and anymore and I guess you could have called me ‘Kalyanapolous’ at the end of the day as Cheryl said. 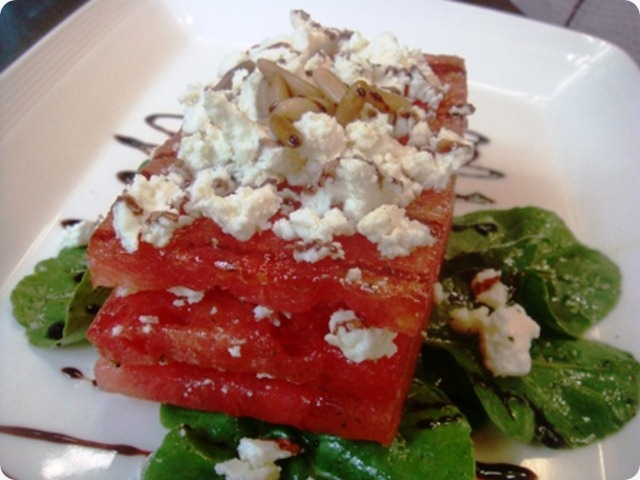 The other dish that the vegetarians ordered was a cold tomato soup. The bowl of soup was placed in a dish with ice in it. It tasted as unappetizing as it sounds. A very pale shadow of the hot soup that we had at night at Moshe’s which paired the tanginess of tomatoes, the zest of basil with wholesome feel of grains of barley and green peas. That was inspired. Take a bow Chef Moshe Shek. 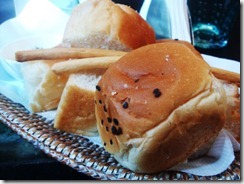 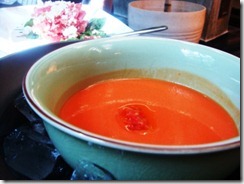 The other meat eater in the group went in for a corn flakes incrusted chicken breast. I loved the effort that went into plating the dish. The look of the dish tempted me to have a bite despite my general disdain for chicken breasts. The tenderness of the meat, which is so rare in breast pieces of chicken, had me purring in delight. 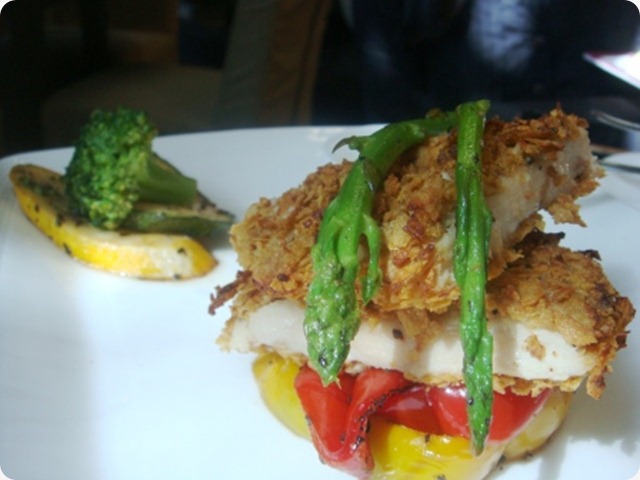 I chose a braised chorizo with mash for myself. The chorizo was nice and sharp and was delectably braised in a caramelized onion sauce which gave it a touch of sweetness. The meat and sauce come together in a passionate tango and the accompanying virginal mash helped reign in the passions that the meat stirred. A well conceptualized dish with a creative use of the dialectics of diverse textures and meats. 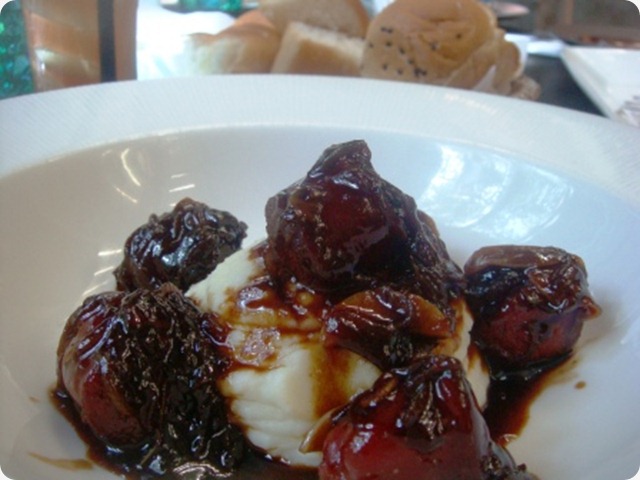 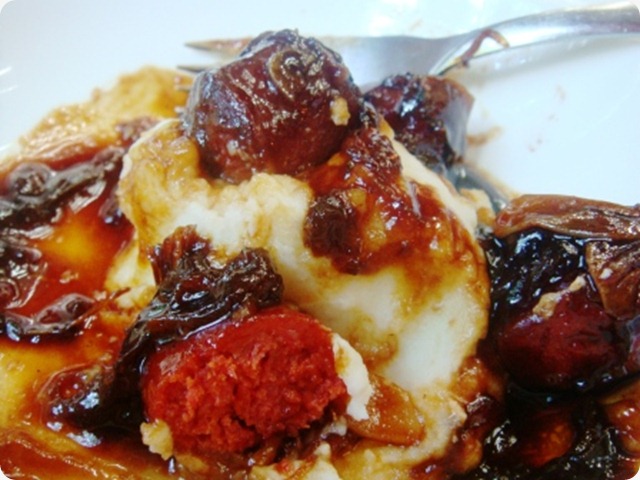 The meal came to about Rs 2000 (USD 40) for the four of us with a fresh lime and complementary bread basket which was a quite a good deal for a restaurant of its class.

We stopped at the Le 15 Patisserie on the way down. Pooja Dhingra of Le 15 is the one responsible for making the macarons the new cup cakes of Mumbai.

We had macarons for desserts. Well, I must say that I missed the ‘collapse in your mouth’ quality that help me in a spell the first time I tried them. The macarons this time were a bit stiff with the taste of the filling being rather over powering. Wonder whether the fact the macarons had been in the fridge for so long caused this. My heart broke when my half eaten macaron fell on the floor. Being an 80s man, 50 Rs for a biscuit sized dessert hurts specially when it doesn’t dazzle. Still the thrill of my first encounter with the Le 15 macarons is something I cherish.

Hopefully I will get third time lucky some day. 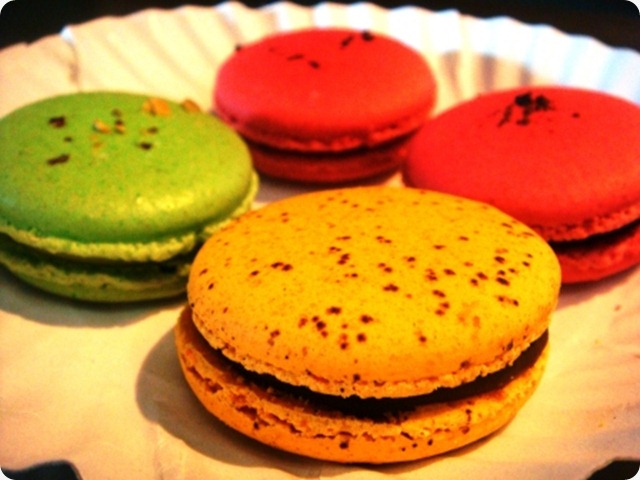 MaDe In Umami said…
great post and lovely pics! the watermelon feta is the best summer salad ever! we did a post on Tasting Room's spa menu as well, especially on their chicken pepper pot. do read and let us know what you think!

Kalyan Karmakar said…
Thanks. I missed having my new camera but this is the camera I used earlier and is easier to carry