Dalal Caterer’s Bhonu on my Mom in Law’s birthday

The following are not transcripts from a tapped phone conversation. More a quasi reconstruction of three conversations between my mom in law and my friend Kurush Dalal of Dalal Caterers. 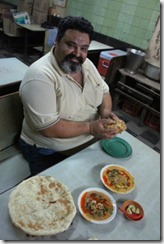 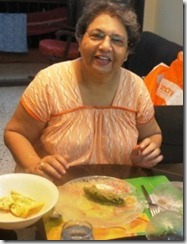 My Mom In Law: “Hello, I am Kalyan’s mother in law. I want to place an order for dinner”

KD: “Sure. Minimum order is 4 portions”

MIL: “No Problem. Fresh pomfret (the prized sea fish of Mumbai) I hope”

MIL: “No. Those were rawas (an also run sea fish of Mumbai). We want pomfret”

MIL: “No they weren’t. Please send us pomfret. With bones. We do not want fillets”

MIL: “We want to order mutton salli boti too”

KD: “I will send you chicken salli boti”

KD: “Who said? We make a very good salli chicken”

KD: “Just try our salli chicken. I will guarantee that you will love it”

MIL: “Now I want to order a Kashmiri pulao daal too. Kashmiri mind you. Not spicy Mughlai pulao”

KD: “OK” .... (KD later had his revenge. There was no pulao daal on the birthday of the rice loving lady. Not that we could finish the food that was there)

MIL: “Now we also want to order that bheja (goat’s brain) masala dish that we ordered last time. Kainaz said it was really good. She loved it. It was the best dish that day”

MIL: “No. Bheja masala. Kainaz said it was like a burjee (scrambled). She really liked it”

KD: “We haven’t made that before but we can try”

Well, no wonder that Kurush Dalal of Dalal Enterprises was flummoxed. He hadn’t made that bheja masala that K referred to. I had! She didn’t remember. AND it did turn out well that afternoon.

I have seen Kurush in action taking orders from phone from his Parsi clients before. He has practice. And patience. I knew that he would not ‘un-friend’ me after I put my mother in law on him.

They say birds of a feather flock together. So while I am a Bengali married to a Parsi, Kurush is a Parsi married to a Bengali! Both of us are extremely proud of what we cook. Or in Kurush’s case, what comes out of his kitchen too. So do not be surprised if I praise the bheja masala I made and if Kurush says that the salli chicken he makes is really good. That’s us. The trick is to see what others say.

So read on to figure out how the Parsis reacted to the Parsi dinner Kurush catered. And how I, as a neutral observer with some exposure to Parsi food, found Kurush’s stuff.

First in the line of fire was the salli chicken. Kurush staked his reputation on that if you remember.

K took the first bite. “This is exactly how Bapai (her dad’s mom) used to make it’.

“Well was Bapai a good cook?” I asked, to play the Devil’s advocate.

“She was a very good cook” said all three in unison. So The Parsis approved.

I took my a bite. This was like no salli chicken I had before. I am not fond of salli boti as a genre as it tends to be too sweet. The gravy here was different. It had the dry fruit, ‘jardalu’, had a touch of sweet and yet a strong fiery heat resonating through it too. I found the texture of the curry very interesting. Roughly chopped onions formed the base and the colour was fired up by an unapologetic reddish film of oil. The curry from the West of India reminded me of chicken curries one would get at  humble ‘Bhaater (rice) Hotels’ along the trails of Bengal in the East. Almost something I would expect to find in Pratap’s Caterer’s Bengali dabba at Mumbai. And the chicken was extremely succulent contrary to our apprehensions.

Kurush had put his money where his mouth was. 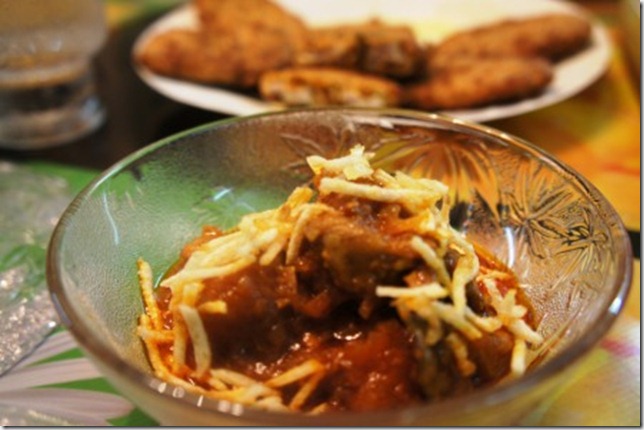 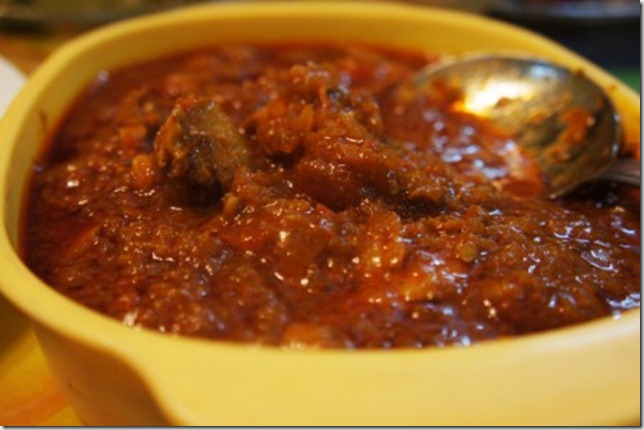 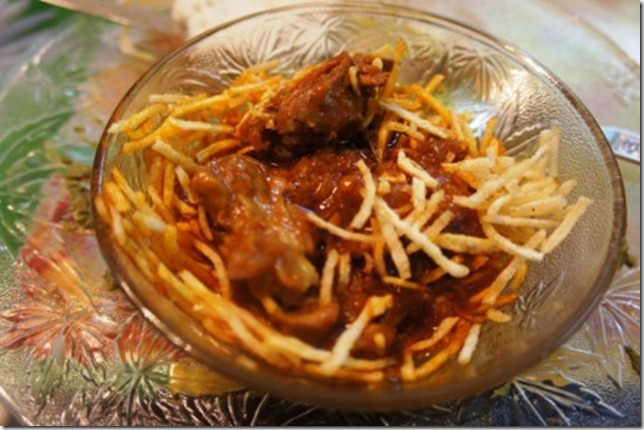 Next were the bheja or brain cutlets. The dish whose order had foxed Kurush initially. MIL started calculating the number of bhejas or goat brains that had gone into each cutlet while the rest of us revelled in this perfectly flavoured and tightly texture dish. My PIl loved it so much that he made a sandwich out of one. That’s apparently a common breakfast thing amongst Parsis. Goat’s brain has a rather creamy feel to it when cooked and one has to get the spices just right. You don’t want it to be too bland. Or overpowering.

Kurush and team had got it just right.

You, er, have an expert’s word for it remember? The one that made the bheja masala that swept Maunika and K off their feet. 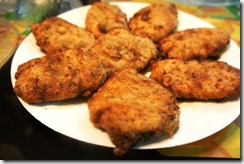 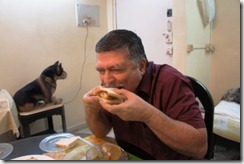 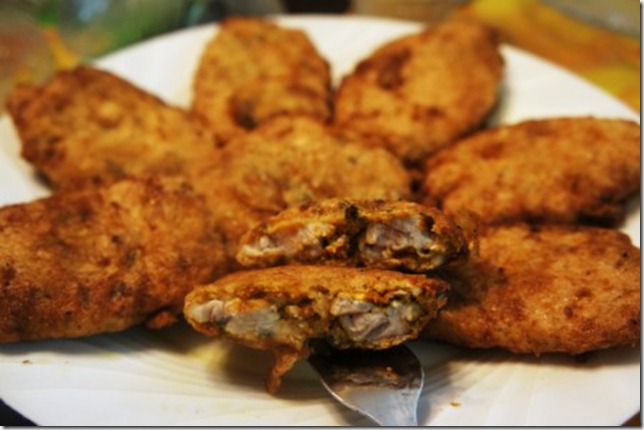 We kept the paatrani machhi for the end. The piece de resistance. Pomfret marinated in a coconut, fresh coriander and chilli chutney. Steamed in banana leaves. The high point of any Parsi happy occasion. The dish that makes or breaks any auspicious occasion for them.

Well Kurush’s patrani maachi didn’t disappoint. The Parsis approved of it. Praised the chutney and the freshness of the fish. The presence of bones in the fish putting their suspicions at rest. It was pomfret. The Promised Fish.

I found the chutney to be perfectly balanced. Again sweet, but not too sweet as it often happens. And with a wallop of spicy heat livening things up. The fish had taken on the flavours of the fish beautifully. Having suffered too sweet and too dry patrani machhis in the past I would rate this with ten out of ten if the opinion of an opinionated Bengali (are there any other kinds?) count. 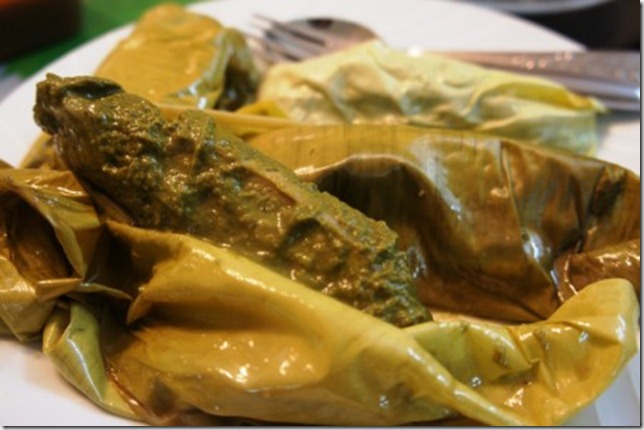 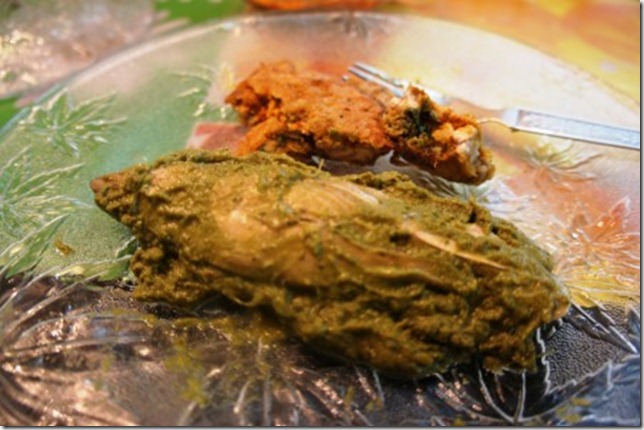 We could not finish all the food as Kurush might have estimated. Remember the pulao he didn’t send? K and I took back the salli chicken home. Except we didn’t get the salli (potato straws). This update which K put up on Facebook explains it all:

“As my mom was packing dinner leftovers to give away, my dad pulls the bowl of potato chips close to his tummy and announces to my mom. "maybe we can keep the potato chips back for us. Might be useful to us later on" Useful ? What use are potato chips except to expand the family girth!” 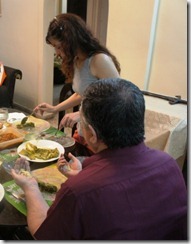 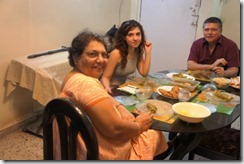 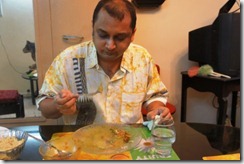 PS: You thought that the way the order was placed was a bit ‘novel’ to put it politely? Well consider this. We have twice placed orders with  Kurush. On both cases he just wouldn’t tell us how much the order cost. So you have to keep your money ready when his delivery guys come and hope for the best. Part of the ‘ Parsi experience’ I guess.

In case you are wondering how much the meal cost, this order of three dishes and four portions each, twelve plates in total, cost Rs 2300 (USD 50) including packaging and delivery.

Unknown said…
For Parsi food, you should go to this place called Hotel Prospect in Panchgani - and make sure that you land up for Sunday lunch! I could not recommend it highly enough.
4 June 2011 at 10:16

Kurush F Dalal said…
Ah Kalyan ... u shouldnt demonise the poor dear .... she was the very modicum of parsi-clientlyness ... worried, sure of herself and opinionated like all good parsis and bengalis ... it was a joy to discuss the menu with her ... ps mayhap another word about the pullao some day :)

on the other hand I'm extremely proud of the food I serve and though there are instances when we screw-up we take full responsibility for our food and back it up with typically loud parsi pride ... i honestly believe that if you don't 'believe' in your food you shouldn't serve it.
4 June 2011 at 11:28

Kalyan Karmakar said…
@Ashish, guess a trip to Panchgani is due then

Kurush, I would feel wary of trusting my meal with someone who is not proud of what they put together. That's why I insisted that they change to you from the initial plans of ordering from karishma, the new Chinese restaurant at Dadar ;)
5 June 2011 at 02:24

Moonshine said…
@Knife I have never had Parsi food.. I am sure you must be shedding tears at this revelation. It sounds really good.. Need a parsi lunch lesson!!!!! :) Wouldnt you volunteer? :p
5 June 2011 at 12:52

Saradhi Rajan said…
Used Kurush to cater for a party after reading about him here. Amazing food! What a find.
27 June 2011 at 11:17

@ moonshine ... it might actually be possible we can freeze and send the Patra ni Machchhi ... costs though may be a bit high due to long distance transportation.
28 June 2011 at 21:23