‘The eye of the tiger’. BBC Good Food based no bake Tangerine & chocolate chip cheesecake 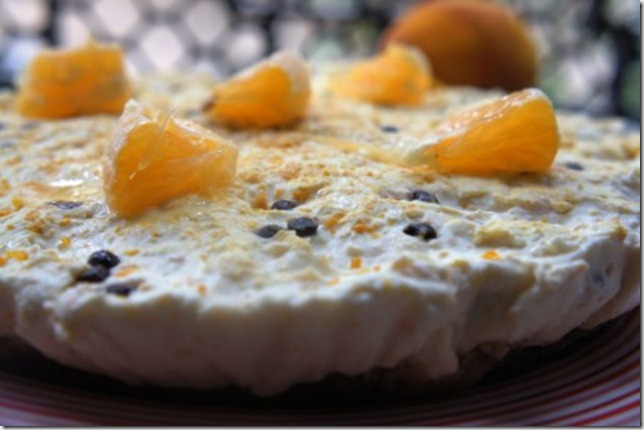 This is the first dessert recipe that I am posting on the blog.

The blog is three and a half years old.

I used to make a couple of desserts almost a decade back. Then gave it up. Focused on eating desserts instead.

An interesting recent conversation kindled the desire to make a dessert again. I wanted to test myself. A bit like Boris Becker at the French Open. I was leaving my comfort zone of the wok, pressure cooker, microwaves and salad bowls. And that too with as tough a target as any. A cheesecake. An orange one to boot. And we are not too fond of orange flavoured desserts. In other words, baptism by fire.

I checked with a couple of friends who bake. Both said that baking cheese cakes are tougher than baking regular bakes. In fact another later said that you are better off going to Moshe’s if you want a baked cheesecake at Mumbai.

I went on the net the next day looking for ‘easy’ cheesecake recipes. Made a huge discovery. You cam make cheesecakes without baking! Duh? Well Becker on grass remember? Which was great as we don’t have an oven. I chose this recipe on the BBCgoodfood.com It was eggless for whatever it was  worth. And could me made by children apparently. I thought I will give it a try. What was the point of watching all these Rocky movies otherwise?

I went to Ariff. The simple cake baking provisions shop opposite Shopper’s Stop, Bandra. Friends who bake Christmas cakes had told me about this institution. A small non air conditioned garage like shop full of baking equipment, cooking chocolates, nuts etc. My first time here. Picked up butter paper, castor sugar, chocolate chips here. I thought I’ll add a chocolate touch to the cake to cut the orange flavour. I then headed to Sante and Vijay Stores at Pali Market to pick up Philly cheese and Mascarpone. I followed instructions to the T and the ingredients cost me close to Rupees eight hundred. I got home, took a shower, had some coffee, switched on the Ipod and started baking. Mixing and churning the creams and cheeses, pounding the biscuits in my mortar and pestle, scraping the Maltas/ tangerines for orange zest. It was good fun. Once done I put the cheesecake mix in the fridge and wished it good night. Not sure if this is normal but I did want it to set properly. I headed to gym as I realised that one of the worst parts of baking or making desserts is the wait. The fun part is licking the dessert mix from time to time.

The cake did set next morning and I took advantage of the morning sun to photograph it. Then I tasted it as did K when she woke up. Neither of us were sure about it. Anything but unrestrained love. What I wasn’t sure was whether this indifferent reaction was because we don’t like orange as a flavour. Plus both of us us felt that the cheesecake could have been sweeter. Actually I am not much of a cheesecake eater in life.

That’s when we decided to call in the experts. I wanted folks who bake themselves, are exposed to bakes, are professional. Whom I could trust to tell me the truth rather than be politically correct. Yet not Gordon Ramsay vitriolic. I wanted to know where the cheesecake stood and what had to be fixed before posting the recipe.

I got what I wanted. 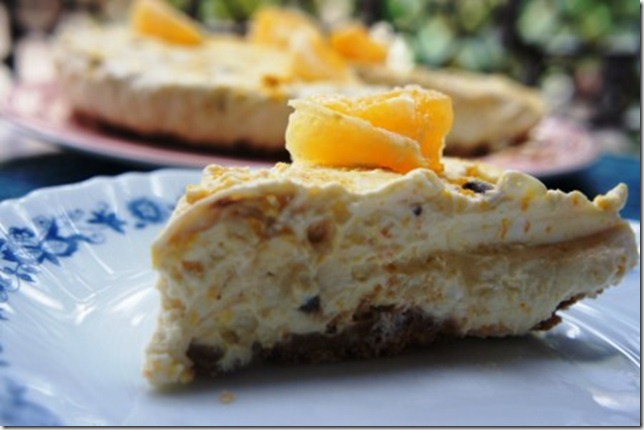 First from Kurush and Rhea Dalal of Dalal Enterprises. Friends and every experienced in the business. Kurush felt it was too cheesy but said the sweetness was up to international standards. He felt that the chocolate chips that I added weren’t adding much. I too felt that they would have worked better if melted. Rhea suggested adding a bit of egg whites to make it lighter. They both took seconds. Kurush, the good soul that he is, said he drove all the way from New Bombay to taste the cheesecake. This is what he later wrote on Facebook about the cake:

“”it was superb ... though maybe a lighter version next time for all the 'health' conscious may not be exactly out of order
i loved the cheesy creaminess and gravitas that it had ... the other high point was the butteryness of the base (which your giving away of the secret made clear) and the fact that it wasn't sickeningly sweet like all Indian attempts .... now u need to make a Bannoffie ... for that i'll camp outside your place :”

My other expert feedback came from C, the mysterious brownie baker and K’s recommendation for the tasting. C is a trained pastry chef and used to work with the Taj group before she hung up her baking mitts. C very sweetly gave me her feedback through whatsapp chats. Some great tips. She did the tasting with 5 other cheesecake lovers. I am paraphrasing what she said below:

“First of all welcome to the world of baking. So an honest opinion. Are you sure? You seem the sensitive type.

Nothing that can’t be fixed. We were unanimous that the crust could be more buttery. It didn’t stand up to the goodness of the cheesecake mixture. McVities is the best pairing for a cheesecake base (I’d used Britannia - me). We like a little more crust.

The cheesecake part had a good mouth feel. Needed a tad more setting. Gelatine perhaps. (Actually it tasted better after 2 days in the fridge – me). The orange rind was a bit too dominating and that’s why the sugar felt a tad less. It would have been all right if the rind was balanced. Did you grind the white part of the orange? You have to watch out for that.

Texture was good. No complaints on that score. Nor the heaviness/ lightness factor. The egg/ no egg thing doesn’t come in to play. If it wasn’t for the bitterness of the rind the sugar would be fine.

Overall great effort. There’s nothing that can’t be rectified so things will definitely look up. It was good to eat, everyone weighed in and here I am giving my professional opinion.

Hope it wasn’t too painful. We girls have to be careful not to wound you sensitive guys.

Toodles now. Off to fry some stuffed mackerel”.

So there you are. Two very balanced feedbacks on the cheesecakes. A lot of useful tips on what to fix next time. And enough encouragement to give me the courage to post the recipe. With some “what I would do differently next time” thoughts.

Together we will conquer the desserts!

This is for you Boris. And Rocky. 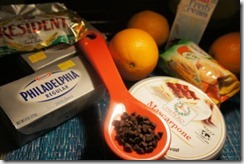 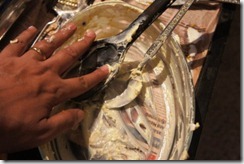 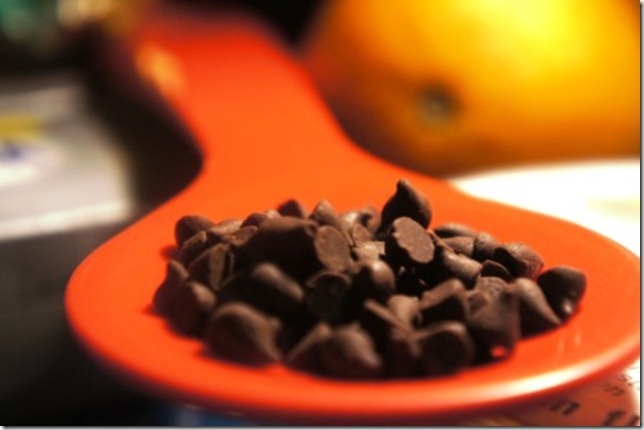 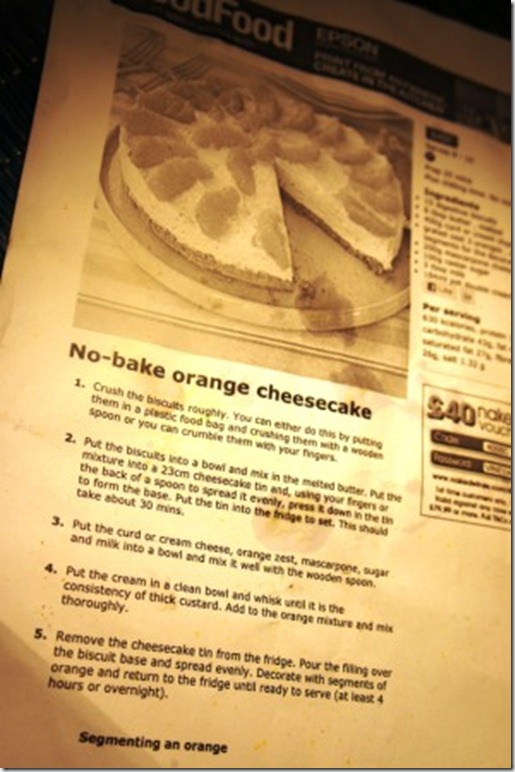 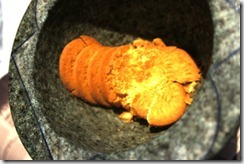 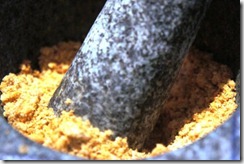 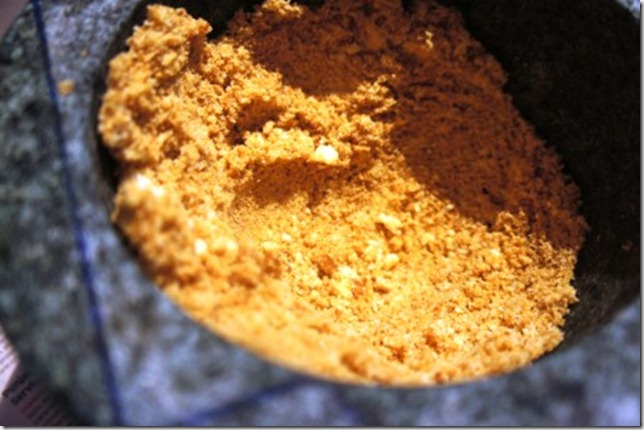 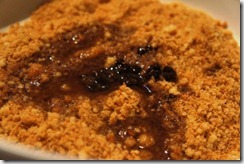 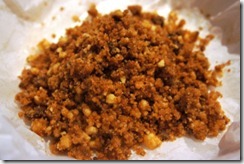 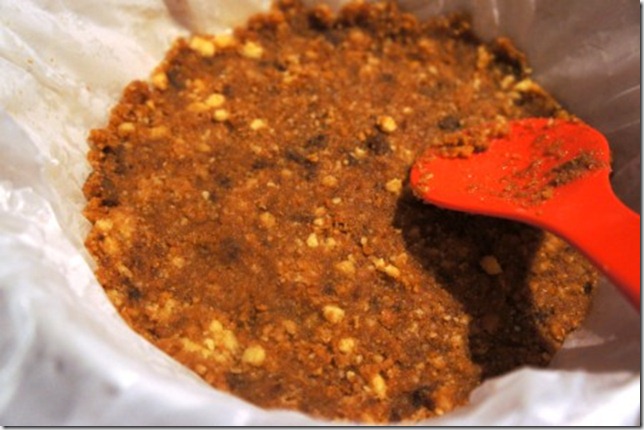 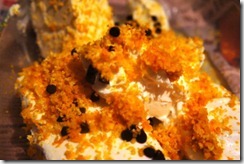 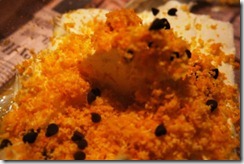 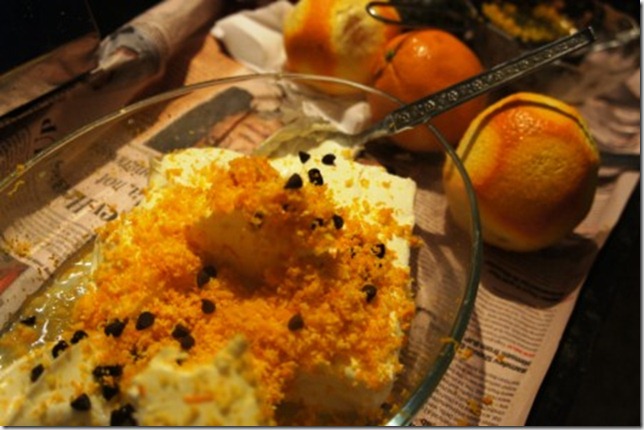 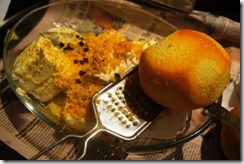 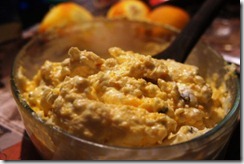 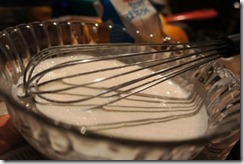 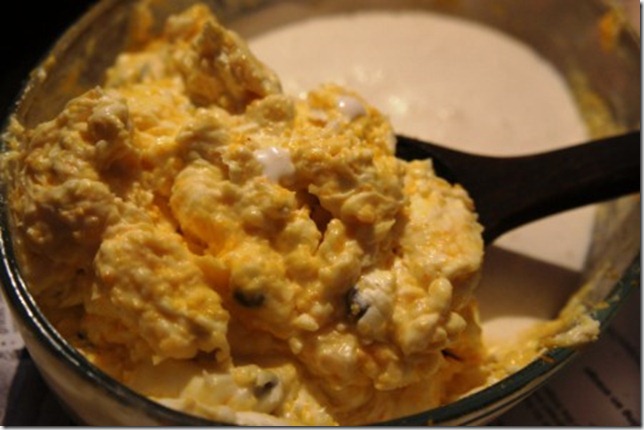 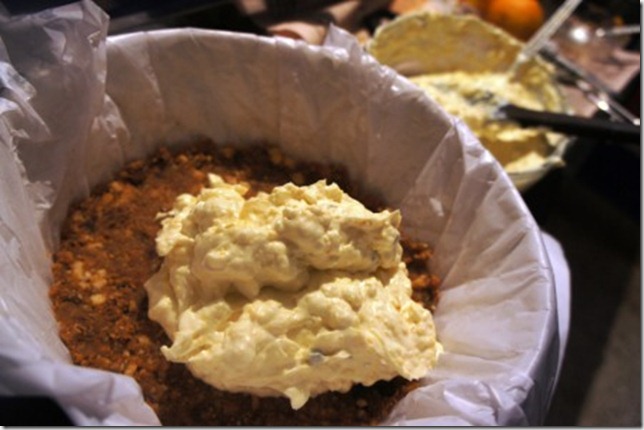 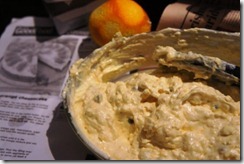 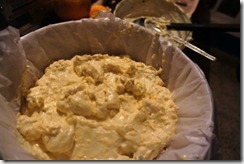 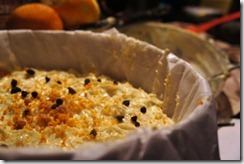 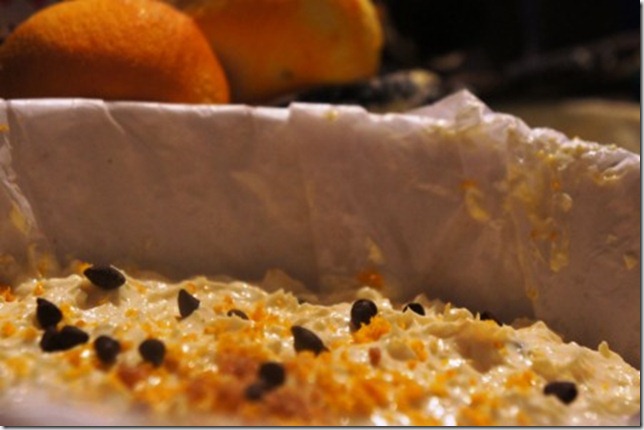 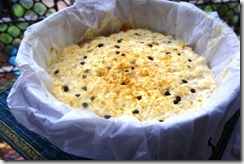 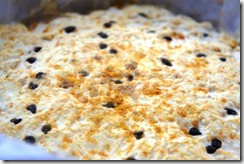 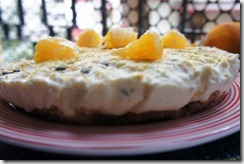 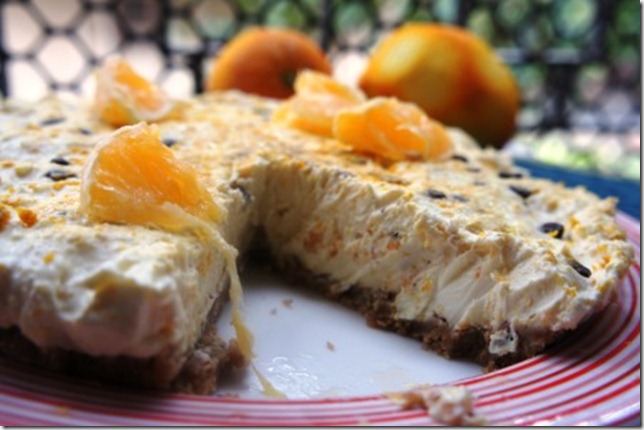 Sayantani Mahapatra Mudi said…
Congrats and welcome to the club. you inspired me as am yet to bake one for myself...but I would prefer the baked version.
11 June 2011 at 10:48

Preeti said…
Well done!! So we will have loads of posts on bakes from you. I am looking forward to your posts.
So this is the non-bake one:) Will give it a go sometime. It's a shame for the next 5 weeks I am caught up with Teaching course:( But need to bake one cake this week...will think of your cheescake then :)
11 June 2011 at 11:05

Chakoli said…
Yummmmy.....I just feel to jump into the pictures and grab it :)

Kalyan Karmakar said…
OK Folks the good news is that the cheese cake tasted better as it aged in the fridge. Needed 24 hrs to set I guess. The orange was a bit bitter though. Too close to the skin as C said

@Sayantani, thanks. I would prefer the baked one myself

@preeti, thanks. I too feel that 'this is the beginning of a beautiful friendship' with the world of desserts

@Chakoli: thanks :) Welcome back? :) reminds me of the chocolate souffle and eggless microwave cake of my early days :)

@21speed: syar you have been an inspiration for trying out new things...hopefully someday something as life changing as yours :)

@Scarlett: I am on your side too

Anonymous said…
congrats! keep up the good work/this is a great presentation.