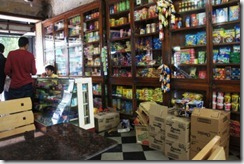 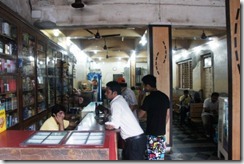 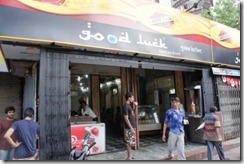 It had all the signs of a place I would like.

A local legend. Hole in the wall.  Always packed. A pace with history. Not expensive. Irani. At Bandra. Recently recommended by people I follow on twitter. On my list for a while.

I guess your luck has got to run out at some point as it did this evening at Good Luck Cafe at Bandra’s Mehboob Studio. If you have been at the blog before you will know that I am no stranger to simple places. Not always the cleanest of places. For me what matters is the quality of the food. The personal touch of the owners. I have discovered some great places. Through, what I call, ‘grunge eating’. There are times when I have walked into the most dilapidated of places and known that I was at the right place. Call it my sixth sense.

Good Luck cafe is far from the shabbiest place I have eaten at. Nor is it the simplest. But there was something about it which I knew just wasn’t right. Call it ‘eater’s intuition’ but I saw ‘bad food’ here. I don’t know what lead to the feeling. Was it the scrawny shwarma stick outside playing with the flies. Or the still air. The heavy sense of solitude which was incongruent with the number of customers eating there. Or was it Ranjit (@qtfan on twitter), who had come with me, mentioning that his favourite person at the counter was not there.

The miasma of Good Luck weighed heavily on me. 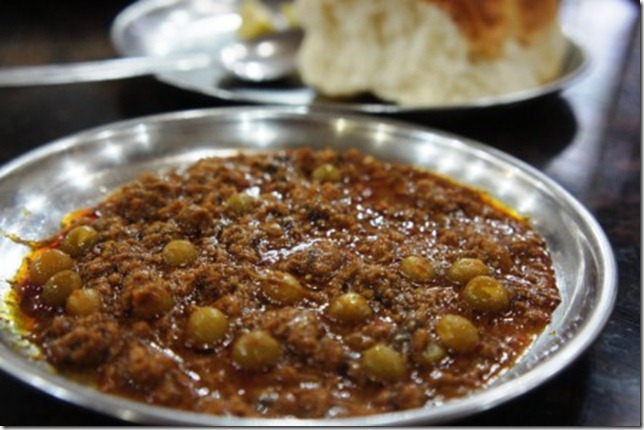 We found a table in the middle and placed our order. The legendary kheema (mince meat) pao (bread.

Was a bit nonplussed when the dish arrived. The layer of minced meat didn’t rise even half a cm above the plate. Quite a mean little serving with some huge peas swimming it it to add some body. Visions of Nirupa Ray - who played the long suffering widowed mother of poor families in the Hindi movies in the 80s - adding more water to the daal to feed her two children after they had worked all day in the city came to mind. What else could explain a minced meat dish where all that was visible were peas?

I took a bite of the kheema. Nothing. Nothing at all. It was almost as if I was at a dentist with my palate dulled with novocaine before teeth extraction. My taste buds felt nothing – taste, texture – nothing. It was as if I was floating in outer space.

I kept quiet and took another bite of kheema with the mercifully soft pao. Still nothing. The dish evoked fewer emotions that the loveless marriage evoked in Kate Winslett’s character in The Revolutionary Road.

I looked up wearily at Ranjit.

“I had their kheema a year back. This is nothing like that. I had really liked that. This sucks,” said Ranjit. 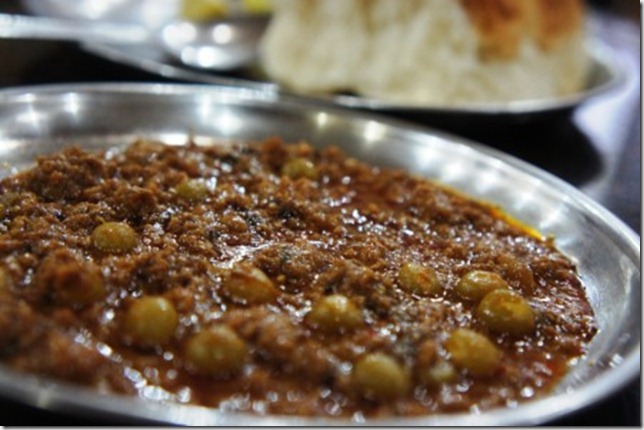 Luckily Ranjit had the foresight to order an ‘anda burjee’ the slightly tamer version of the Parsi Akoori. Both a lot livelier than Western scrambled eggs. Fiery mix of eggs, spices, chillies and onions. Akoori and Burjee are the Scarlett o Haras and Rhett Butlers of the egg world as against the Melanies and Ashleys of Western scrambled eggs. I recently saw the picture of a saintly docile yellow near omelette on an internet post on Akoori and went ‘huh?’. 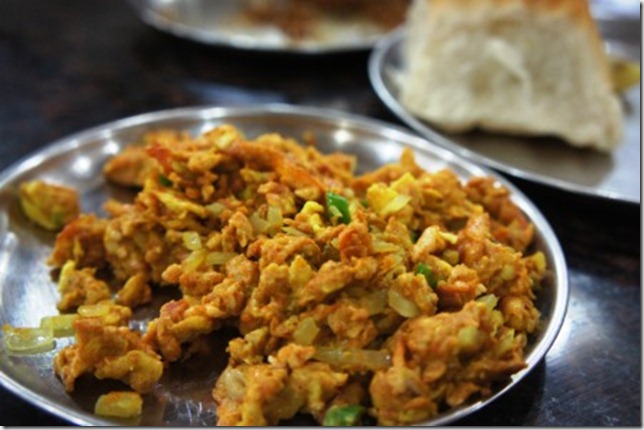 Did I say ‘luckily order an anda burjee’? Well a bite and I knew that there was no ‘luck’ here too. The only good thing was the warm mouth feel of the eggs. The chillies or the onions did nothing to the taste.

“This needs salt’ Ranjeet said sounding as if he was at Washington DC as the Aliens landed in the movie Independence Day. Soon I realised why he was so frantic. Desperate attempts with the salt shaker were to no avail. Salt just didn’t come out. Whether it was due to the monsoon moisture or the sheer lack of salt will remain a mystery. I could see Ranjit’s blood pressure go up as he struggled to extract a grain of salt. The complete lack of salt in the egg would hold him in good stead then. 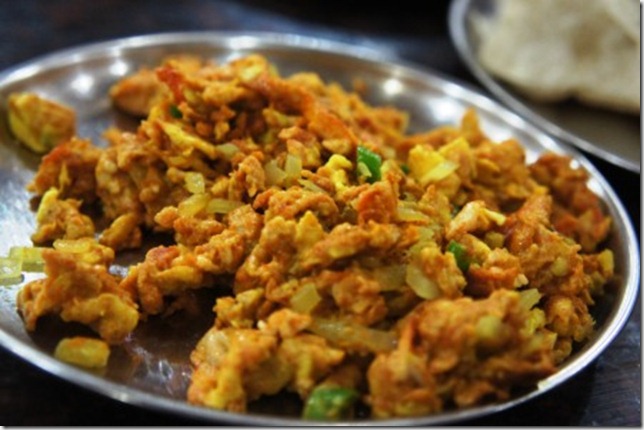 Earlier in the day I managed to squeeze some time before a meeting in town for a quickie at Olympia. Rs 67 (1.2 USD) in AC for a half chicken biryani and lassi. No wonder Colaba is my Tirupati. The food was so good that I hunted and pecked for each grain of rice as if I was a rooster and left no trace of food on the plate.

At Good Luck Cafe the only thing we wiped clean was the bottle of Coke.

As Forrest Gump would say, ‘that is all I have to say about that’. 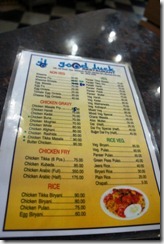 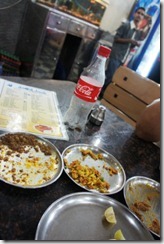 Good Luck Cafe at Mehboob Studio is pretty close to home. Which helped since I had to visit the ‘little boy’s room five times since I returned. The night is not over yet: 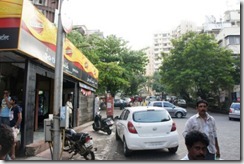 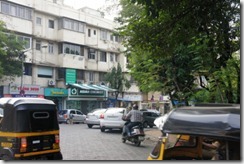 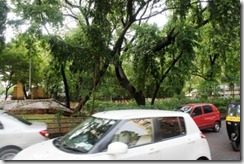 New eats: Loved the cream cheese with chilli panino with fresh basil pesto on the side at Mocha Mojo the previous day

My 5 favourite Grunge Eats at Mumbai:

hamaarethoughts.com said…
I love keema..(minced mutton) I recently ate at an indian restaurant,which was made very well..
its something if made properly is heavenly..love the picture here,,reminds me of that dish..
also read about Nirupa roy in wicki ..kinda something interesting..
17 June 2011 at 03:29

Scarlett said…
I had friends who used to love Good Luck's keema pao. I wonder why. I think Mondy's makes some really good keema pao but it may be limited to their breakfast hours, I'm not sure.
17 June 2011 at 09:10

agent green glass said…
aww. i'm sorry you had such a bad experience there. but i just had to comment. i go to good luck at least once in two/three months. and always have the bhurjee (yes, you have to add salt to taste) and the kheema ghotala. and it has always been bloody awesome. just the right amount of spice, and squeeze some lime on it..oooh mama.
maybe the cook was on leave or having a good day. but yeah, been going there for eight years. and never had the runs either!
17 June 2011 at 12:42

Anonymous said…
Love the way the movie flashes come in... especially the Nirupa Roy and Revolutionary Road ones.
The last time I have Keema Gotala from New York Cafe in Chowpatty I really liked it. You should try sometime.
17 June 2011 at 12:49

@Scarlett: I had nice kheema at Ideal Corner, Fort

@AGG: guess I ran out of luck as I said

I am your follower! I follow you on FB as well!
Poor guys, I really feel for u! :p
I'm never going there...
I love your Blog.
Keep up the good work!

Kurush F Dalal said…
u poor man and your poor abused tummy mega sympathies (ps black tea with lotsa lime helps) .... sad to hear goodluck is so wasted these days ... it used to be a lovely irani back when i was a kid in bandra and was a place where tonnes of christians floated in (in waves) after mass on sunday for brekker ... kheema pav, half fry, bun maska et al