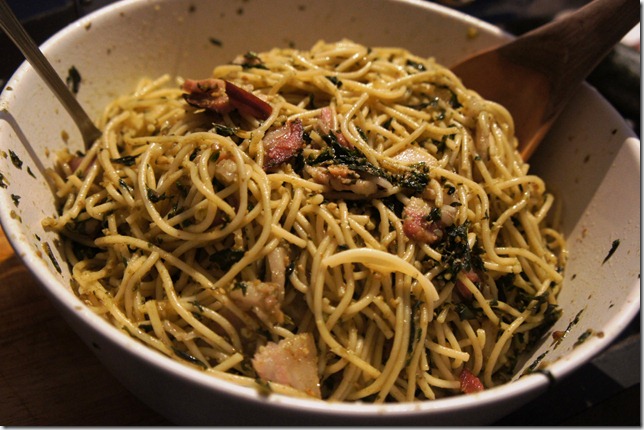 Entertaining on a Monday is a silly idea right? That too when it is unplanned.

This story began the night before when Kurush wrote about the brownies which his wife, Rhea, had just made. I put my hands up on Facebook asking for a share. And they agreed!

You would want to serve something elaborate and fancy when your guests are coming from all the way across the city, bearing a freshly baked brownie which they are kind enough to share with you. Guests who are expert cooks, are passionate about food and are professional chefs themselves.

I planned a Mediterranean dinner of some pasta and fish. A bacon pesto spaghetti which I offered as bait to Rhea to share the brownies she had baked. I bought some basa to go with it. Emboldened by my recent Thai chilli paste experiment I decided to make something Italian this time with the basa. 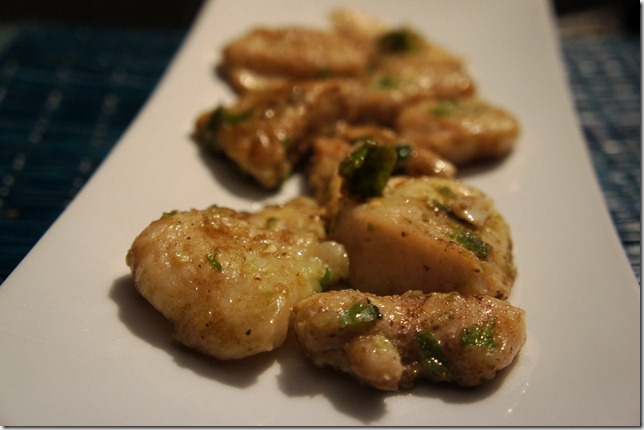 The two dishes did not require more than half an hour’s cooking at my end, were easy to shop for and was anything but mundane. The cooking methods were a mix of a couple of minutes of shallow frying, some boiling, very little chopping and a bit of microwaving. The only physical effort came out of my using the mortar and pestle instead of a food processor. But I find the mortar and pestle therapeutic and often a source of good ideas in the kitchen.

Given the mood of this post I am going to keep the recipe descriptions short and to the point. Go through them and you will realise that entertaining on Monday needn’t be a chore. Specially if you have some the company of passionate food lovers and raconteurs.

The best way to bring in the week.

Basa is similar to catfish according to Kurush. It is an incredibly light and airy fish which has a slightly fatty creamy feel to it. Has to be treated with a lot of tender loving. 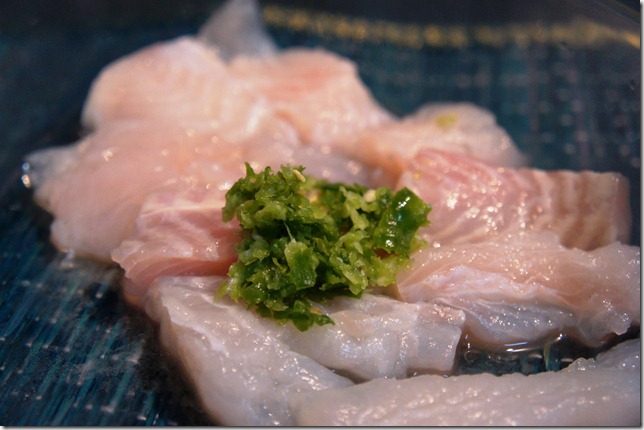 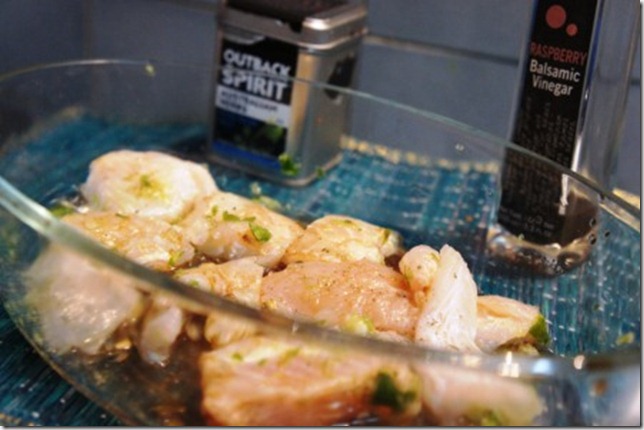 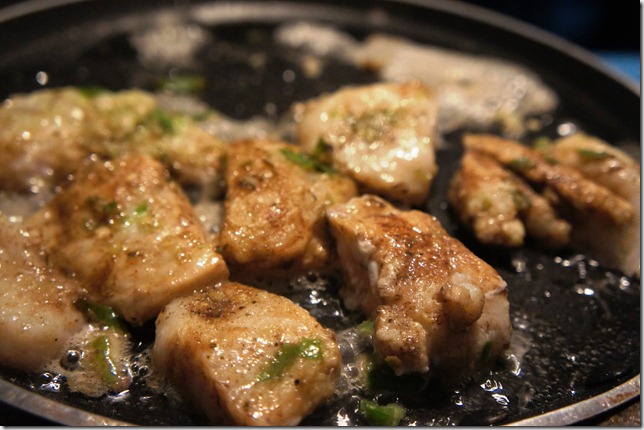 The end result was extremely delicate with the taste of the marinate floated around the creamy bites of the fish.

The trick is to not over cook or over spice the fish. To eat it fresh off the pan. Italian cooking of fish is often very simple from what I understand. The fish is the hero of the dish. The purpose of spices and herbs is to enhance the taste of the fish and not to overpower or hide it. Cooking is often done through grilling or shallow frying so that the freshness of the fish is retained. The antithesis of fish  preparations of the West & South coast of India where fish preparations use a lot of masala and some pretty heavy duty cooking.

Spaghetti tossed in fresh balsamic pesto with bacon (for 3)

I like to make my pesto fresh with a mortar and pestle. I love bacon too for the decadent flavours it imparts to a dish. This dish was prepared in the microwave barring the spaghetti which I boiled in an open pan. 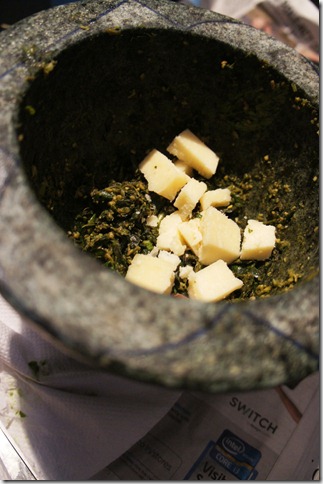 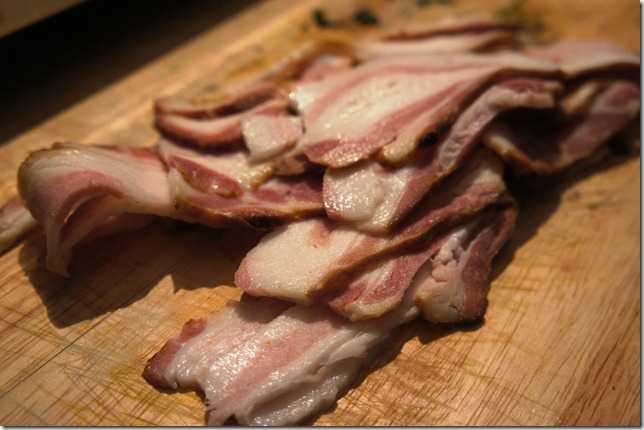 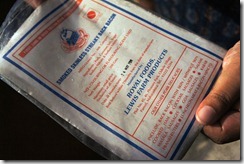 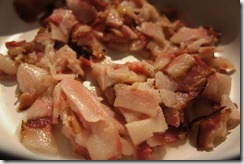 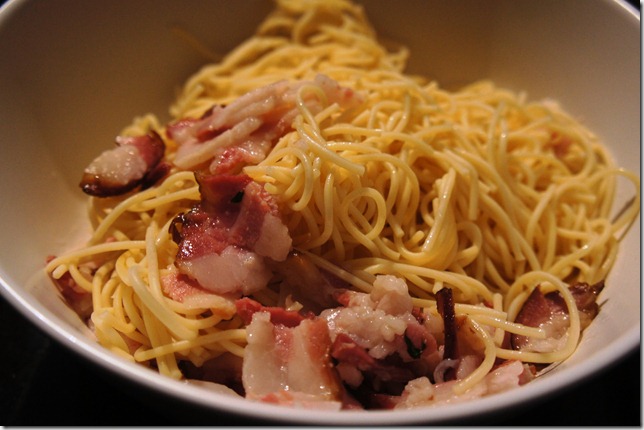 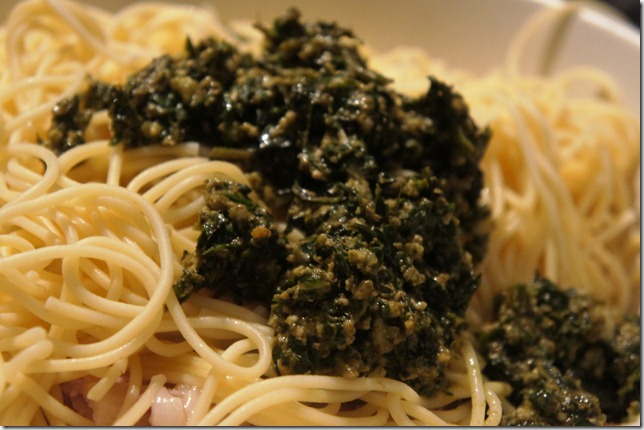 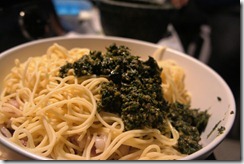 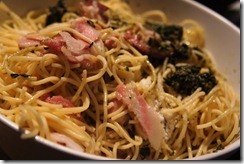 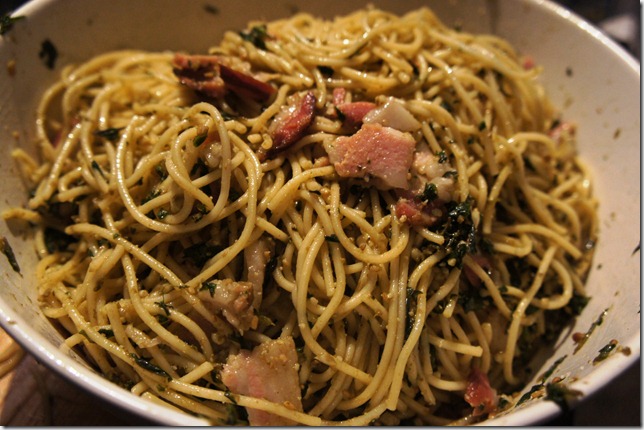 The best part of the dish is the way the heady flavours of bacon and the fresh whiffs of pesto spread through the spaghetti. 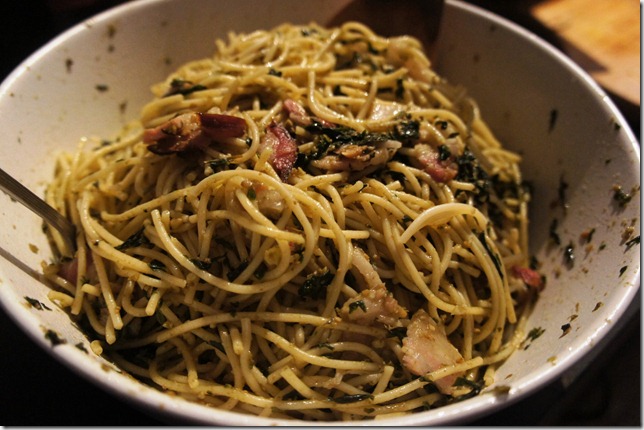 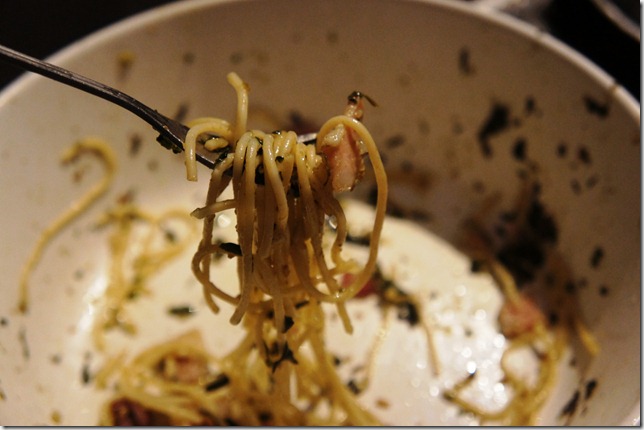 The high point of the evening for me was seeing Kurush make a beeline for the cheesecake I made which I made him taste a few days back. He seemed to really like it.

And then there were Rheas’s ravishing brownies which we just couldn’t have enough of.

What a wonderful Monday. 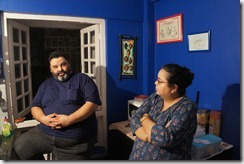 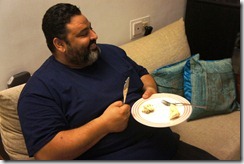 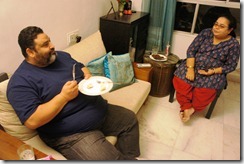 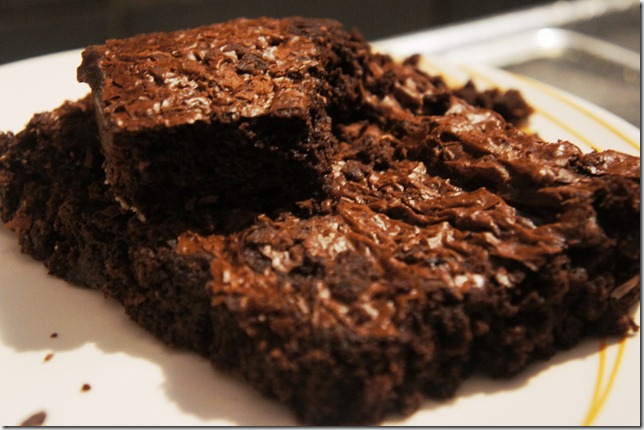 Saee Koranne-Khandekar said…
I LOVE the look of that fish! It looks moist and just right, and it's not got too much going on. Like you said, it does come across as the hero of the dish. The marinade seems delicate and not overpowering, too. And those brownies. Sigh.
14 June 2011 at 16:33

Rhea Mitra Dalal said…
all I have to say about that sublimely simple yet sumptuous dinner is that it was fully worth driving all the way across town... two magic words..pesto and bacon and you've got me hooked :)

Kalyan Karmakar said…
@Su Lin: thanks for dropping by... hope the recipe works for you

@Saee: those brownies were spectacular. I was quite pleased with the way the fish turned out. Basa opens up a lot of possibilities

@Aparna: Chef L and you are due for dinner at our place

Moonshine said…
@Knife You first pasta lesson.. people at work still remember my attempt fondly!!!!!! :) I have pesto with rocket leaves in it.. would that make any difference?
17 June 2011 at 14:32

Kalyan Karmakar said…
@Moonshine might taste sharper and less woody than basil pesto but you will never know till you try
17 June 2011 at 15:44

Miri said…
That is one beautiful meal K - the fish and the spaghetti both done perfectly. The fresh basil is driving me mad!
19 June 2011 at 13:30

Kalyan Karmakar said…
@Bong Mom: should go well will both