‘The scent of a woman’. San Churro, Bandra 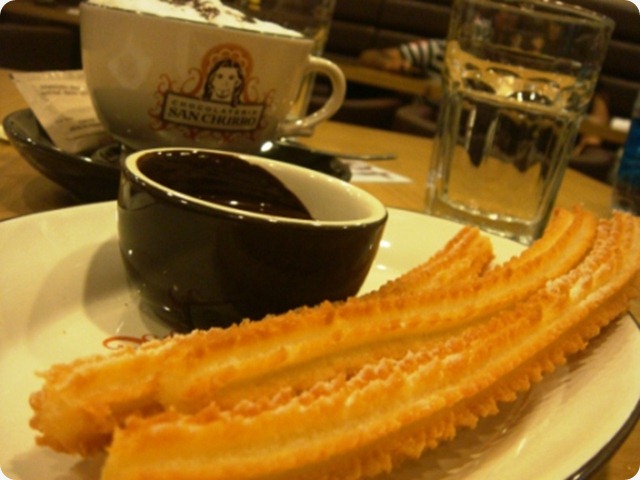 I never know what to say when people ask me what my weekend plans are.

The ‘plan’ is to do nothing. The sort of stuff you yearn for on Mondays.

Then there was that short afternoon nap this Sunday that I woke up from craving for a soft chew chocolate chip cookie. Something so impossible to get at coffee shops here. A craving which led us to San Churro, the branch of the Australian chain, that recently opened at Bandra’s Waterfield Road. 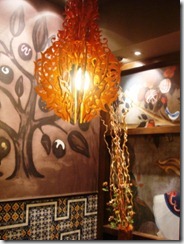 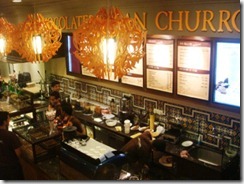 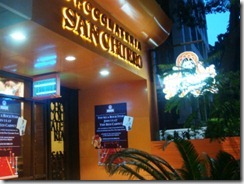 We walked in expecting the Sunday evening hoards. Turned out that one could sit upstairs too. We went up the wooden staircase into the cavernous section. It was packed. Salwar and Safari suit clad uncles and aunties asking for vegetarian sandwiches, specifically paneer ones.Teens decked up in their Sunday smarts asking for eggless pastries. There was a lot of colour and money around and for a moment I thought we were at Cream Centre, the favourite joint of the vegetarian Gujarati community at Mumbai.

Despite the huge crowds there was a certain warmth about the place. Could be the dominant browns in the decor, the warm yellow lighting, little chocolate wisecracks on the walls and tissue papers, the clean loo or the efficient and smiling staff.

Our waiter could answer my questions on what the ‘Spanish latte’ was and what the different chocolate options available to go with the churros (choo-roe-s) were. All of which helped us order well.

They actually did have fudge chocolate cookies here. Sandwiches. Pastries, cheese cakes. And little balls which I thought were petite fours but were chocolates.

I took a picture when a member of the staff came and suggested a better angle. Very different from restaurants which look at you suspiciously, if you take photos. If not bar you.

San Churro IMHO represents the new age spirit of sharing and crowd sourcing. Values you can subscribe to if you are proud of what you serve. A great way to build a brand. Made me regret not carrying my Sony DSLR. The old Sony Cyber Shot, that I carried to be unobtrusive, made me feel like I was carrying a stiletto after a Kalashnikov. 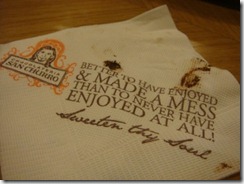 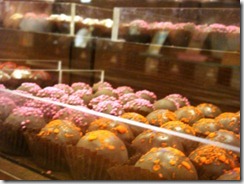 Like I said there were cookies, pastries, shakes, hot chocolates but we had come for coffee and it made sense to have churros at a churros place!

This was not the first time that I was having the dish that has been referred to as Spanish doughnuts or waffles and looks like a Tamillian Murukku. Churros are made with batter shot out from a churros gun into boiling oil. A bit like the way jalebis are made. Ustaad and his ilk don’t use ‘guns’ though when they make their jalebis.

The first time I had churros was at Chocolate Affair at Pali Naka Bandra and then at Vic Market at Melbourne’s (scroll to the bottom of the link)famous Churros van.

The Churros at San Churro were airier and less chewy than both the earlier ones. It paired beautifully with the dark chocolate which I chose over milk and white. As the waiter had assured me, the dark chocolate was not bitter. It was sweet at first but not saccharine sweet. Very noble and restrained. The after taste slightly bitter the way distinguished chocolate is supposed to. 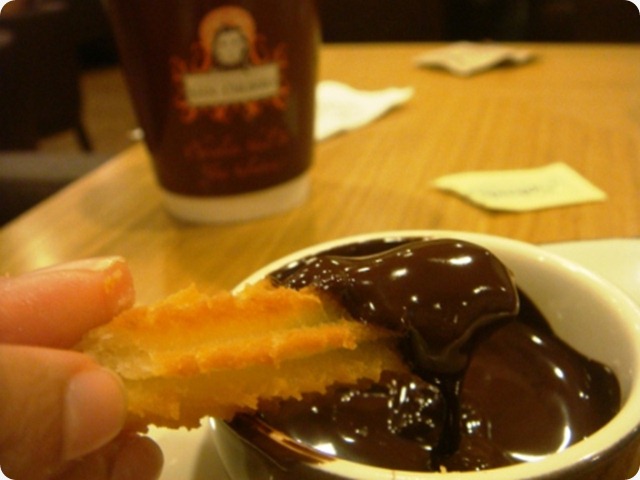 The combination of the churros with the dark chocolate sauce were reminiscent of the intense passions of the tango in The Scent of a Woman. My favourite film of all time. Everything around you went still, your forgot your surroundings as you bit into a churros draped in chocolate sauce. Your senses stirred up in a very raw and unrestrained way. This was pure primal pleasure.

No wonder they have separate servings for kids. This was for grown ups.

The cappuccinos  were frothy and piping hot and passed K’s very high cappuccino standards. And were strong enough for me. The take-away cup design and the sprinkling of chocolate on the foam proudly stating its Australian origins.

The stuff great weekends are made of. 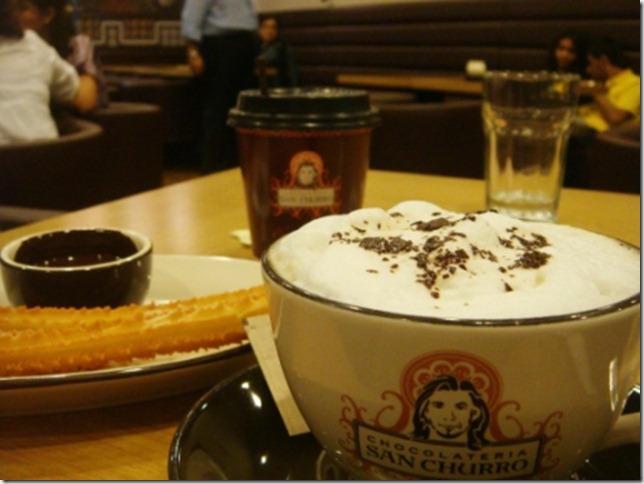 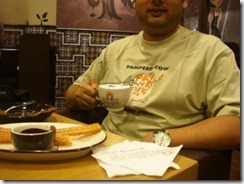 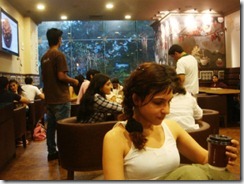 Scarlett said…
San Churros has been highly recommended to me. I may be going to Bondi this weekend, there's a San Churros outlet there that I'm planning to visit. I had churros at The Rocks Market actually. You can't go wrong with molten chocolate :)
28 June 2011 at 09:27

The knife said…
Unfortunately the chocolate sauce was over by the time i reached the churros van at Vic. There was a separate charge for that in any case. So got mine with basic icing sugar then
28 June 2011 at 12:13

Priya Sreeram said…
heard about this place from my friends- delicious review
28 June 2011 at 13:18

7th Fold Media said…
wonderful place yummy molten chocolate you get there.. thanks for the review..
4 July 2011 at 16:45