Singing in the rain… lunch at Gallops, Mumbai Race course

At times we miss out on the legends when surrounded by those in a feverish rush to feature ‘what’s in’, ‘the latest’.

Call me old fashioned if you will but there are few dining experiences in Mumbai to beat that of a lunch at Gallops on a rainy afternoon.

Gallops is the restaurant at Mumbai’s Mahalaxmi Race Course. It is open to the public. A Mumbai heirloom surrounded be the sort of greens which would make the most hardened of meat lovers go weak in their knees. A sense of freshness and space which is so rare in the concrete, over burdened, grimy, frenetic urban El Dorado called Mumbai. 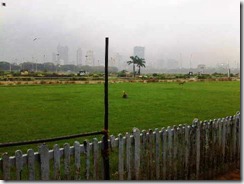 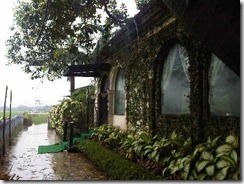 Now imagine all of this freshly washed in the rains. The grey skies contrasting  beautifully with the fresh and bright greens. The lazy sound of rain tapping on the windows joining your conversation. Friendly folks at the wicker gate ushering you in with huge colourful umbrellas. Waiters, who are old timers, smiling, competently serving you. No trappings or chips on their shoulders.

A mixed crowd of diners. Parents with grown up children planning tomorrow’s lunch. Two mothers with their three foot tall boys. Both young men standing on the sofa digging in to their chocolate sundaes. Take no prisoners, leave no ice cream behind. A long table of a corporate group lunch. Colourless jokes, the odd applause for the teacher’s pet, squeaky voices of the big guys, forced conversations on work, so out of place on a weekend.

If people watching is not your thing then gaze out of the huge windows and give your eyes a treat at nature’s spa. 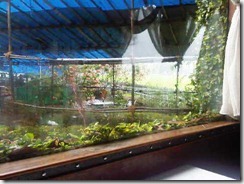 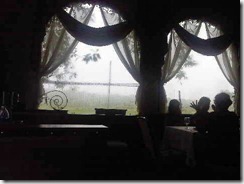 Starters of beef tenderloin. The skewers brought to our table in an interesting little charcoal barbecue. The meat was marinated in a very evolved, inspired and subtle rosemary and pepper marinade. The condiments floating respectfully in the background. Pleasing you but leaving the centre stage to the meat. The perfect cameo.

It’s a pity that the cook had sucked the ‘tender’ out of tenderloin. The meat was too tough. Yet the flavours so alluring that we worked our way through the dish, not minding the effort required.

The main course, our personal favourite here, Prawn Thermidor, was the perfect comeback after the tough loins of beef. Gallops had redeemed itself. The smile that had never left our faces became wider now. The sauce a mix of butter, cheese and eggs. So sinful that we broke all Ten Commandments that afternoon. The prawns big, fresh and juicy. Cooked to perfection. Not hard or over cooked at all. The cardinal sin which many chefs do while cooking prawns. Often to hide the crime of stale food.

The prawns at Gallops were the way the Gods of sea meant them to be. Pairing wonderfully with the tantalising orbs of boiled egg yolk, a very restrained bed of herbed rice and the luscious bed of mashed potato that we chose over vegetables.

The prawn Thermidor at Gallops was culinary excellence at its best which brought back memories of many many happy occasions over a decade or so.  A true Mumbai classic. 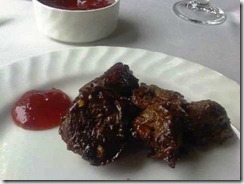 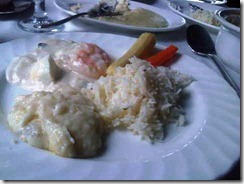 Yes I know this depends on which side of the rains one is in. And what’s with the Chambal Valley dacoit-like ride at the Bandra entrance to the amazing Sea Link?  There is the reality of a crumbling city around us.

But today my glass is half full.

Note: The two dishes and two rum and cokes in this grand setting cost us about Rs 1200 (25 USD). Doubt if the suburbs can ever beat that. 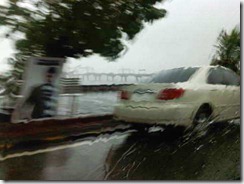 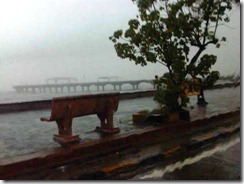 Anonymous said…
Alas! I have enough of the monsoon all year round and a lush green field just outside my bedroom window....But my heart is not here - I miss Bombay - the spirit, ....the familiar streets...hot coffee on a rainy afternoon :(
I miss the lovely 'home' feeling
- Ips
12 June 2011 at 13:00

ba-xi said…
kk why dont u do a series on monsoon victuals and locales. us camels can read, salivate, moan about the spoonful of rain we get annually and generally get mushy about the rain [altho my last experience of rain was being stuck in a car for 3 days during the famous bucketfuls of 2005!]
12 June 2011 at 21:05

@Scarlett: I am sure Mumbai will find you soon

@Ips: aww, i read this comment while I was at candies today