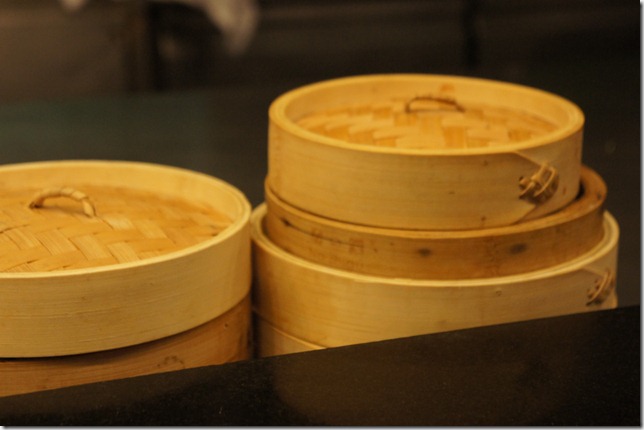 I am a big fan of ITC hotels and their Kakoris and black daals. Known them to be a hotel chain which is serious about its restaurants. Never had been to Pan Asian, their rather blandly named Asian restaurant, before though.

Finally went there today thanks to @Arpana of Gostana, whose friend @ash_incomprendo (twitter handles all), works at ITC and invited us to the ITC Maratha’s Pan Asia. The invite was to for the Beijing Food Festival there. My love for authentic Oriental food took me there.

Food bloggers Shanky and Rushina were there too. We were hosted by the beaming,  Executive Chinese Chef of the ITC Hotels group, Chef Liang. So Hakkasan the previous night and then Pan Asian the next afternoon. This was one royal Oriental ride.

Chef Liang asked me if there was anything that we avoided.

“You are my brother he said” when I said “vegetables”.

Some of the steamed dumplings were really interesting specially the pork ones that he did for us. The pork buns, which I am normally not too fond off, worked for me here as the casing was thinner. Shanky pointed out that in China the casing is thicker as it is part of street food there and as everywhere carbs are cheaper than meat. 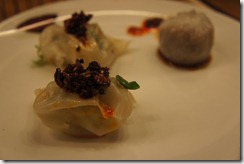 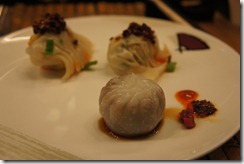 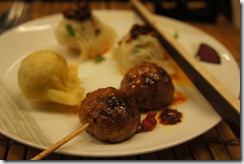 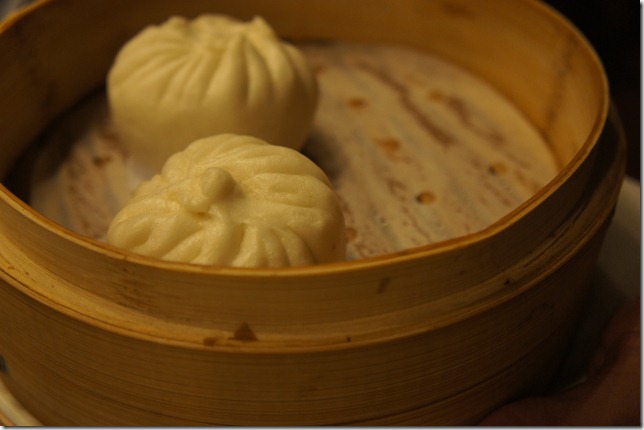 The highlight of the afternoon for me was the stir fried pork. Chef said that the pork today was so good that he didn’t have to do the usual double fried version. He made this in a Hunan style apparently. The taste stayed with me through the day. 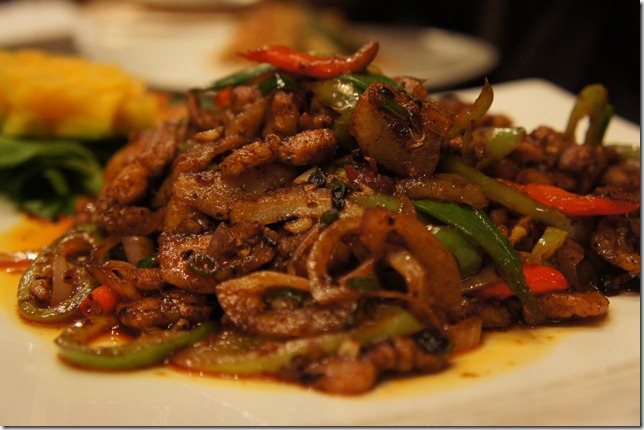 The other mains included mince and beans and a lobster dish but I was partial to the pork and these passed by in a blur. The excess of food in buffets and organised reviews always leaves me a bit shaken. The use of beans in the mince was a throwback to the Chinese that I have eaten at Malaysia. 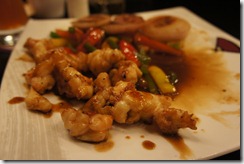 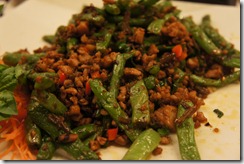 There was a fairly tame tom yum soup but a lovely sushi platter. Shanky and I monopolised the sushi platter and most of the pork too which worked for the girls who were not keen on either. There was a host of other starters where the steamed sea bass stood out with its demureness. 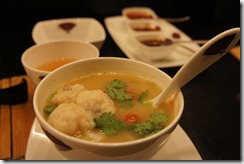 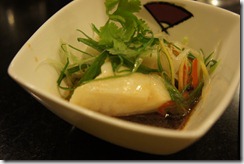 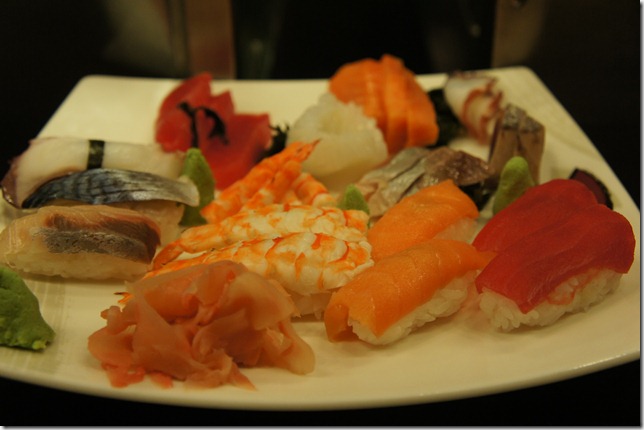 Couple of new discoveries. Sizzling rice crackers and then a plate of Oriental desserts which included a sticky rice dumpling stuffed with nuts and sugar. This is a popular Beijing snack according to the Chef who has now been in India for close to a decade. 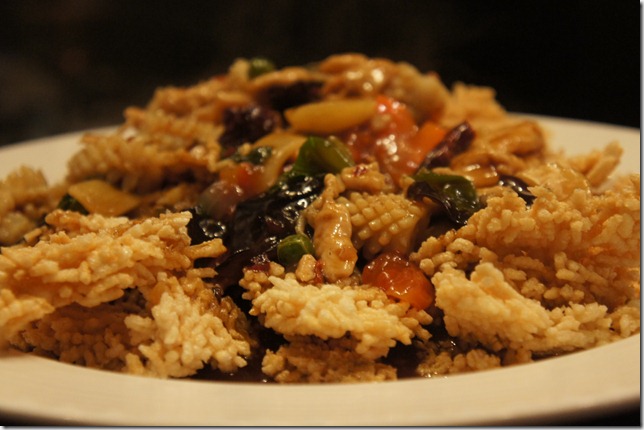 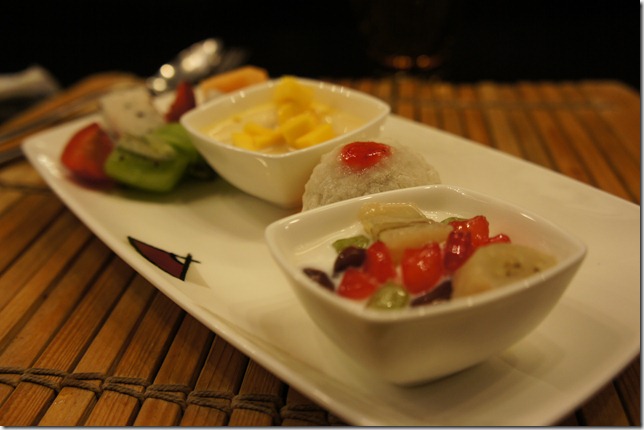 Chef Liang is man with a sense of humour who at the end told us “you only talk of food and now I am hungry”. Sent us of with a promise to cook a meal once of dishes he cooks at home. He is not a hands off chef and apparently is around in the afternoons. He and his army was busy putting together this meal to us while we lapped up the perks of being food bloggers. I took the opportunity of tasting a bit of sake. Seemed like vodka to me. The much travelled Shanky said that Sake can be a lot stronger and ‘stinkier’ than this.

The food we ate today was from the Beijing food festival but I really hope that the Chef keeps up to his promise of treating us to home styled food some day. 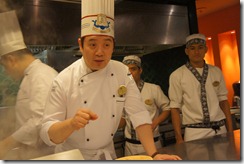 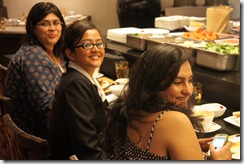 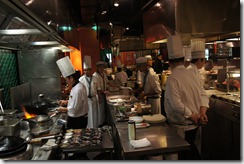 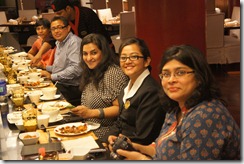 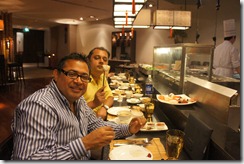 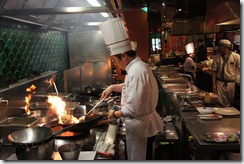 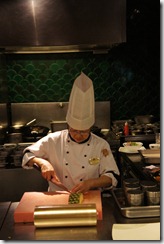 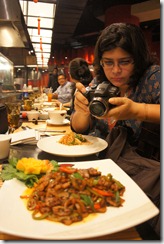 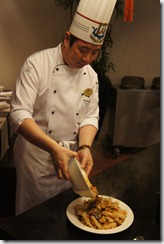 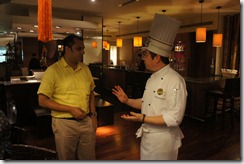 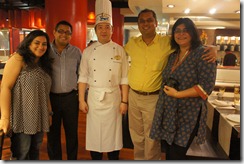 The Bride said…
Looks yummy. I also am not a fan of pork buns here because of the thickish skin...so I guess the chef read Indian tastebuds right. I have a feeling he would have sweetened the desserts also to suit Indian tastes. The pork and beans is a staple dish here also - though normally much less pork - and one of favourites. Sushi shouldn't be stinky if it is fresh no? And if it is not absolutely fresh, it's dangerous.
28 July 2011 at 08:02

Rujuta said…
Just one word : AWESOME...
The dishes look super fab..
You all must have had a great time finishing them :)
Sizzling rice crackers and the sticky rice dumpling sound interesting.. Recipes please :)
Happy Blogging
Rujuta
28 July 2011 at 10:26

Kalyan Karmakar said…
@The Bride...do keep giving these China Live insights :) I really hope i can make it there some day.

I meant sake and not sushi. 'My bad'. Thank for spotting the typo. Fixed it.

Scarlett said…
That pork looks mouth watering! Look at the caramelization on those onions....yummm!
28 July 2011 at 17:01

thailand villas said…
I love the dumplings and rice topping entrees. Really mouth watering to the reader.
19 December 2011 at 07:09