Cooking in the rain: The Mumbai Food Blogger’s potluck

on July 31, 2011
Here’s a recent write up in The Week magazine on food bloggers that Shormila of Kichho Khon forwarded to me.  Some of the bloggers in this post are there and Finely Chopped is there somewhere in the middle and in this one too

Saturday evening. Rain thundering down. The porch of a restaurant two lanes away from my home. Sides covered by plastic sheets giving us shelter from nature’s fury.

Assembled were a range of folks for the Mumbai Food Blogger’s potluck dinner. The group ranged from folks who had blogged on food for close to a decade to those who started two posts back (but tweeted about food for a while). Recipe bloggers, restaurant reviewers, bricolage bloggers, photo bloggers, men women. Boys and girls too, as the age band started at the early 20s and went on to the early 40s.

I was not planning to write about this dinner.

Honestly was a bit jaded by the bloggers dinners of late. They are normally held at newly opened restaurants, often not at high streets. You don’t get to move around and chat much as you have wine companies, restaurant owners parading their wares. ‘There is no such thing as a free meal’ throbbing at the back of your head. The last couple of ones had fairly pedestrian food which would be rather stupid to offer when you are calling food bloggers over. Politeness saved the hosts I guess.

Last night’s pot luck thought up of and organised by Rushina of A Perfect Bite, coordinated by Nikhil of a Nonchalant Gourmand and hosted by Arpana, of Cooking – It’s Not Complicated, and her staff at Gostana was  refreshingly different. There was a lot of energy and buzz yesterday, back slapping, hugs, happy chatter and laughter. Pure unrestrained camaraderie with food, the common binder.

I caught up with friends whom one has made through blogging. That always happens at these dos. Often outside of blogger meets too. Yesterday was different as one got to know faces one recognised from previous meets and their blogs but had not really spoken to. If you put around twenty quasi grown ups together when its raining outside, and there is great food to be eaten and served, then you have the recipe for a very boisterous evening.

The food was bloody good. And I am not the one to be polite here. The food was consistently better than most of what I have had at the recent blogger’s junkets. I am not saying this because folks put in a lot of effort into it, many carted it in the rain from long distances. Not because of the efforts that went into planning and preparing or the expenses that went into putting the together.

The food was simply fantastic. Without any qualifiers.

There were a couple of cases where the chefs felt that the dishes hadn’t turned out as good as they wanted it to. And said so. Which is the honesty that blogging is all about. There were three dishes and a dessert which stood out to me amidst a very worthy line up.

No. I wont say which ones ;) But all I’ll say is that the creators of the three dishes had learnt the recipes, or the art of cooking, from their moms.

The smorgasbord of dishes was so consistently so good that I darted from tray to tray digging in with my fork, beaming away happily, well after I was full.

You had all sorts of cooks. Professionals. Folks who have been cooking at home for a while. New kids on the block. Gourmet chefs. Those who like to fool around in the kitchen.

Some put the dishes together by themselves. Some got their moms to cook for them. Or their husbands (!) Some had their domestic help acting as sous chefs to cut and chop.

But finally all put together by those who came to the dinner.

So what did we eat? Well here you go and I am lifting from Kurush’s FB page here,

And here's Rushina's round up of the event with a detailed description of the dishes. And here's Nikhil's

So now you know why I am still in such a buzz.

Some of you have asked me if you can attend these dinners if you are a foodie but not a blogger. Well all I can say is that hopefully the tale of this dinner is enough to make you start your food blogs.

Note: I entered Gostana and kept my camera aside as there were enough photography studs around. Thought I’d sit back and enjoy. So here are some pics taken by Jyotika of Follow My recipe which will give you a flavour of what the evening was like. 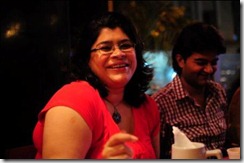 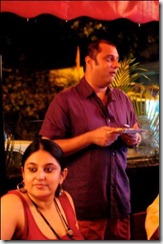 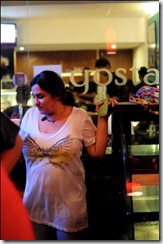 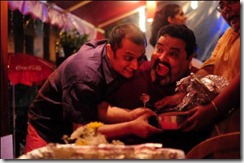 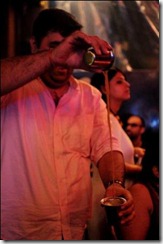 This is a list of some of the Mumbai food bloggers who made it yesterday. Hope I have not missed out anyone.

And hope to see your blog there in the list soon.

Rujuta said…
Looks like food bloggers in Mumbai had great blast..food, conversations and coffee.. great..
Any chance of food bloggers meet in other cities? I would love to meet up with fellow food bloggers :))
Saw the pics of the potluck party on A Perfect Bite...the food looks awesome and so many varities..gosh.. the rest of us are pretty jealous :))
1 August 2011 at 11:26

Unknown said…
Kalyan,
Does one have to compulsorily blog to enjoy all these stuff? Can't one do other stuff like say, serve or clean the dishes? :)