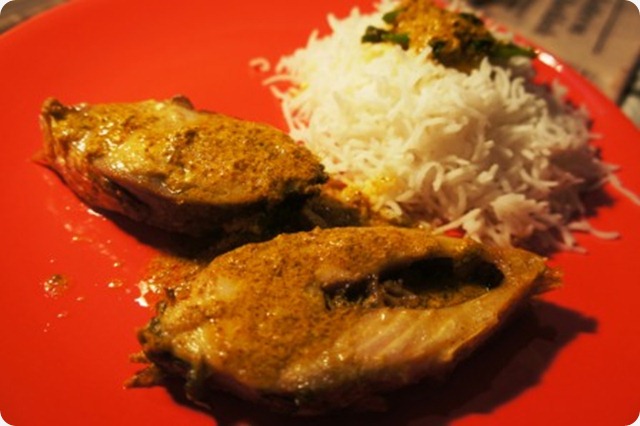 I didn’t grow up in a house where bhaapa ilish or steamed hilsa was made. So this legendary Bengali dish had an even greater aura for me.

Bhaapa Ilish was one of the first things I tried to make with recipes posted on the internet by Bengali ladies settled abroad. One of the recipes suggested putting the hilsa in a steel ‘tiffin box’ and then floating it in a pan of hot water. Used to turn out pretty good. Taking the hot vessel out of the boiling water, opening it carefully without singeing one’s fingers, the suspense of seeing whether the fish had cooked properly … all of this added to the fun.

Then folks from abroad suggested cooking it in the microwave. I was a bit wary as I wasn’t sure how the fish would react to microwaving. Once I followed a microwave bhaapa ilish recipe which used curd. Honestly, I preferred my doi posto ilish to it. Which is natural given that the fish here is fried and not steamed. Posto or poppy seeds add a certain headiness to it. And the dish was my own creation!

Today I decided to give the microwaved bhaapa ilish a shot again, I went back to the original recipe. Or what I remembered of it. I followed it barring a few exceptions. The original recipe used cream which I found a bit strange given that Bengal was a milk deficit state. Must have been the local influence on the expat writer. I use skimmed milk instead of cream.

Secondly, the recipe called for adding mustard oil. I don’t like mustard oil. I had stopped adding oil in my steamed hilsa a while back as the natural oil in the fish worked well enough. Thought I would go without oil in the microwave too. 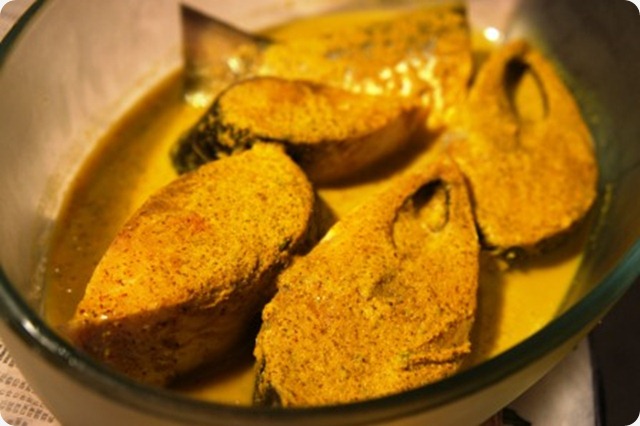 No oil, no cream, so that’s fairly healthy huh?

Wasn’t sure of how long to cook it. This was 1045 at night. I quickly posted a question on twitter and on the finely chopped Facebook page and immediately got  answers.

@Finelychopped depends on the power of your microwave, I usually do it for 4 minutes on each side on a 850W. Enjoy :)

I went ahead with the UK based Sanchita’s (Nutty Cook) recipe. Not just because she has married a fellow Karmakar as I once found out. But because I have no idea on the controls of the micro and what on earth was medium micro power! 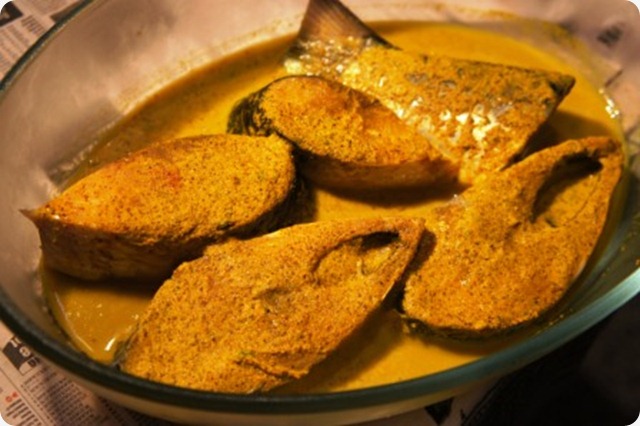 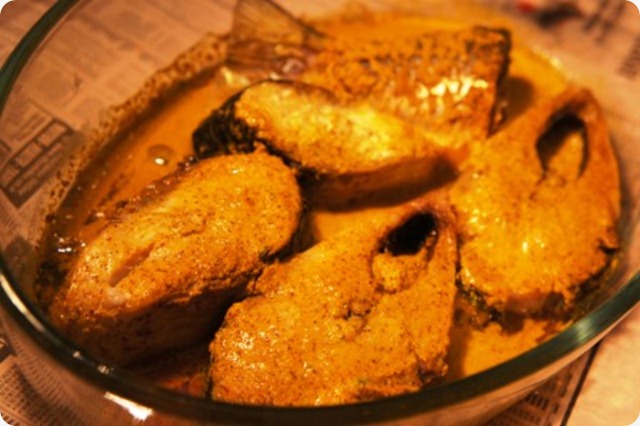 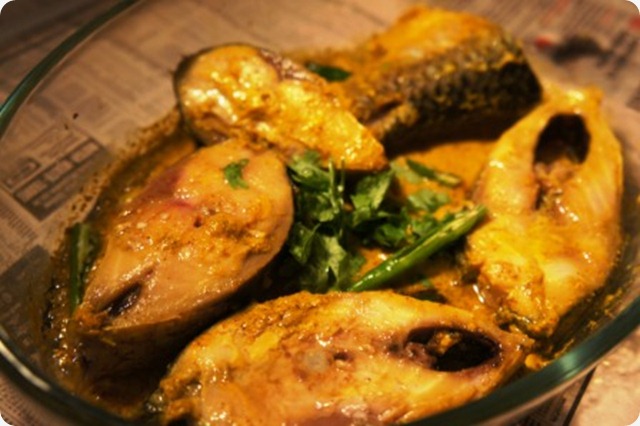 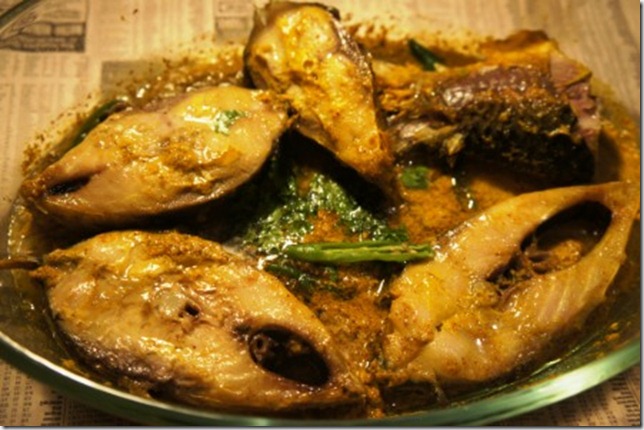 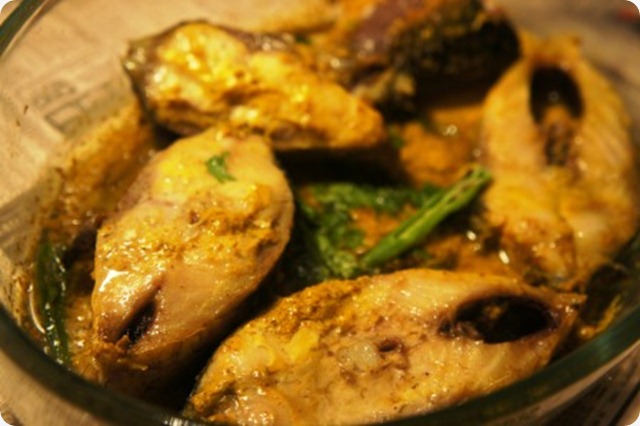 Eat this with steamed rice. The mustard and the ground chillies ad a certain pungency to it. The end result worked for both K and me. The fish was juicy. Cooked right. Not too piquant for K who can’t handle too much of mustard. And of course the quality of both the rui and ilish from Poonam at Khar Market this time was stellar.

I know this sort of thing interests Bongs so the price of Hilsa was Rs 400 a kilo. The size about 1.3 kilos. Not too many bones or kaatas.

Note: Never eat mustard based Bengali fish curries with pulao unlike what the sacrilegious photo on a web site recently showed. Plain rice always. Never drink a cola with mustard. You will get a sore tongue as the feisty mustard and carbonated bubbles of the cola collide. 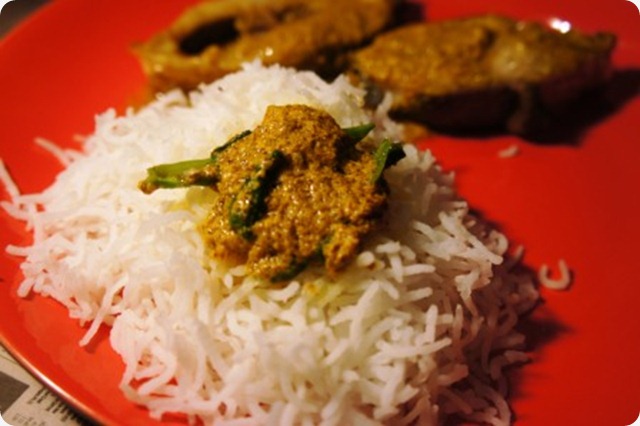 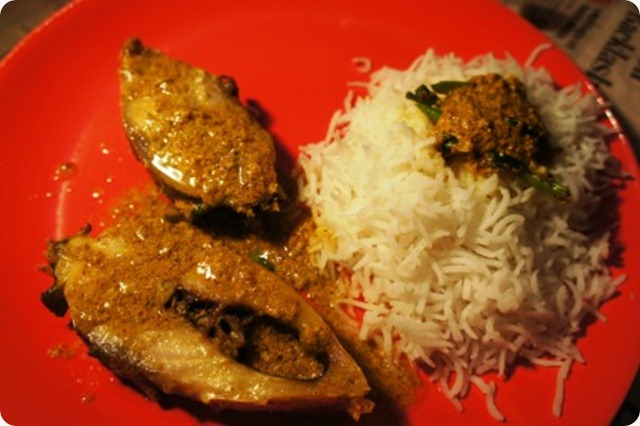 Ushnish Ghosh said…
Dear Kalyan
Great recipe again with the main recipe. (The main recipe in your writing, the food is side dish)
I remember the earlier great recipe. Every time I tried to cook Hilsa in micro, the fat layer exploded. The reason was high fat content in layers, which reached 100 deg C much faster to burst the steam bubble out off the layer. If the fish is submerged in water or spice, this phenomenon is less likely to happen. The other reason was 450 W or higher setting.
So next time I get a low fat Ilish , I will try the micro again. By the way if you can tolerate the pungency of mustard paste ( freshly ground) , I am sure , you can tolerate the oil, but as you said you need not use it in a oily fish.
Happy eating !!
Kaku
1 July 2011 at 10:40

Sanchita said…
Looks so tempting! I tried to make sorshe ilish so many times but never get that authentic taste. How do you manage to avoid the bitter taste in the mustard paste made from the black mustard seed?
1 July 2011 at 15:33

@Sharmila: this was a fantastic ilish

@Ghosh Kaku: thanks for your kind words of encouragement. is a big high for me. even I am not comfortable with fish in the micro. The marinade helped. And Sanchita's tip

@Sanchita: your tip came at the right time and really helped last night. Frankly we don't get a very bitter taste... but are not the best judge of what is authentic... also don't use too much of shorshe so that might help us I guess
1 July 2011 at 16:19

Well, it's micro medium power when it's 600 or 60% (depending on the brand of your oven) cooking power. It is said that non-veg items cook best at medium power of cooking in a microwave oven. You can reach this power by keep pressing the micro button. Even while reheating non-veg items in the microwave, it is recommened to use mirco meduim power.

Haven't cooked fish in MW yet. I am old school when it comes to MW, hope to change soon. But the ones in India are different from the ones we have here I guess, I mean my sis-in-law does baking, grilling everything in the microwave in India whereas mine won't live up to it.

@Sanchita -- Do you dry grind the black mustard seeds ? That will make it bitter. Try making a wet paste with posto, kanchalonka and salt
3 July 2011 at 09:41

SC said…
Wonderfully easy recipe, Kalyan da. If I ever get ilish maach here, I'll definitely try it out. By the way, your mum's Scandinavian travelogue was beautiful, as were the pictures. All of you look lovely in the pictures, especially Ma, and as always her stories reminded me of snippets of my parents' life that I am hoping to capture when they visit me this time...

Sharmila Das said…
The pics make me drool. Looking at the kancha lonka with mustard curry on a bed of steam rice. I just love it. But if you use a lil bit of mustard oil it is even more tastier.
4 July 2011 at 16:59

Kalyan Karmakar said…
Arunghuti, thanks for the tip. I remember reading about this in the manual when the micro was new then forgot about it. Played with the controls after reading your comment

@BonMom I guess we use the micro more here as more homes have that rather than an oven. Plus the Indian mentality to get full value out of it. So reheating is not enough

Frankly I have never faced a problem with bitter mustard

@SC: thank you so much. ma would love to red this. Hope you get some good ilish