I stepped into Hakkasan and was immediately hit by the flavours of Oriental food courts. Followed immediately by the aroma of freshly cooked prawns wafting in. I knew I was in a good place.

I had heard a lot about Hakkasan ever since it opened next door beside the ICICI Bank at Bandra, Mumbai. A Michelin Star restaurant. All of my food gang wanted to go there.

I heard it was expensive. Found out today that it was at par with say a Bungalow 9. And a lot better.I read a DNA review just before I made my reservation which mentioned a dress code. On the phone was told about the ‘smart casual’ dress code for men including closed shoes. How British, how hoity toity, that too at Mumbai where one dines at five stars in sandals.

Well I have eaten at few of the Chinese/ Oriental five star restaurants here. Indiana Jones at the Oberoi, China  House at Hyatt, San Qi at Four Season and Taj’s Golden Dragon. I am leaving the Thai Thai Pavilion and Koh out. Well Hakkasan trumps the others on taste.

They say that the address of people who really matter don’t run beyond two lines. It was the same with Hakkasan’s menu.

That’s it. No story of a farmer called Hakka and his grandmother, or the meals of the Hakka warriors who plundered across Asia nor of the restaurant’s journey from Europe down the silk route. They let the food do the talking here.

The ambience had a nice a club feel to it with its heavy use of wood and mood lighting which was bright enough to see your food and yet cosy. The bar was more neon'-like and as a separate section. The music.. club, thumping and yet not obstructing conversation. Our waiter Rajesh, after a slightly hesitant start, cheerfully answered all my questions on the food and gave me a fair idea of we ate.

We started with one of what seems to be their signature dishes. Hakka dim sums. You had steamed and fried as options. Some recent discussion on my Calcutta Chinese breakfast post about how people in China have pan fried dim sums made me go for the fried ones. Plus no Bengali would choose steamed over fried. The Bawi egged me on too.

K was hungry and she patiently waited as I clicked. Thankfully there were no ‘knives’ on our tables. Sharp ones at least. 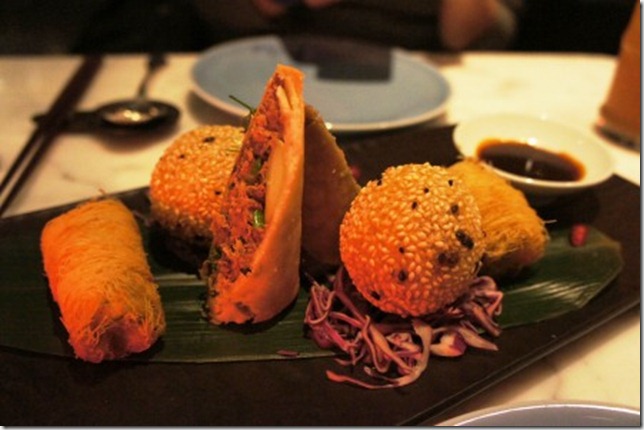 I started with the chicken in sesame ball. A little pocket of shredded chicken in a barbecue sauce enveloped, phuchka-like in a sticky, mildly sweet sack which I later found out was made with rice. Different. Interesting. Not awe inspiring. The weakest link. Things looked up with the crispy duck rolls served with hoisin sauce. Shredded duck, tender with the taste nostalgic in an Indian sense. As I later found out, this was probably due to the use of spices such as cinnamon. The crust was fried just right and was the perfect foil for the stupendous meat.
This was K’s favourite. 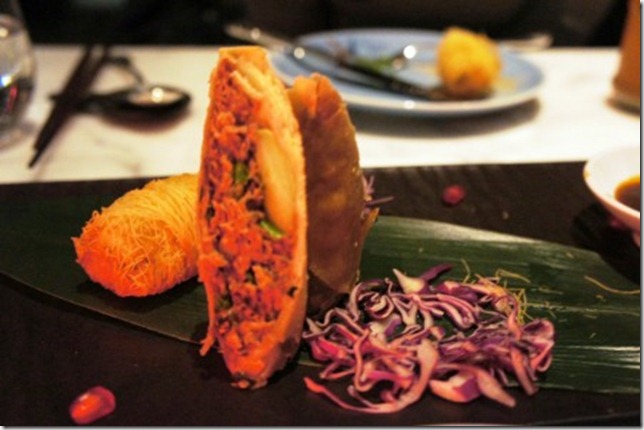 I went for the prawn sei me roll last. I took a bite and my eyes popped out with joy. This had a faint lemon grass kafir lime-like flavour shrouding the juicy prawns. Rajesh later told us that this was flavoured with ‘curry’ and hence the lemon grass essence.

This was my clear favourite. 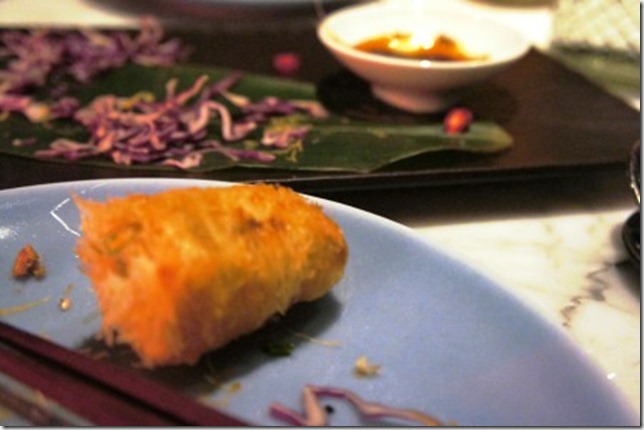 The plate had two of each type.

For the mains we went for a seafood mee goreng.

Now I say this very rarely but this was a noodle dish I would have felt proud to serve. I am very vocal about the Singapore mee goreng cart inspired ‘Hakka’ noodles that I make.

At the risk of sounding like bloggers and tweeps who keep praising their own cooking lavishly I must say that I am very good at these noodles and the ones at Hakkasan were the rare restaurant noodles that gave me joy. Plus the ingredients were a lot better than what I got. The noodles slightly thinner and hence more delectable. And it had some of the largest and yet juiciest and most cheerful prawns in the world.

This was good stuff. 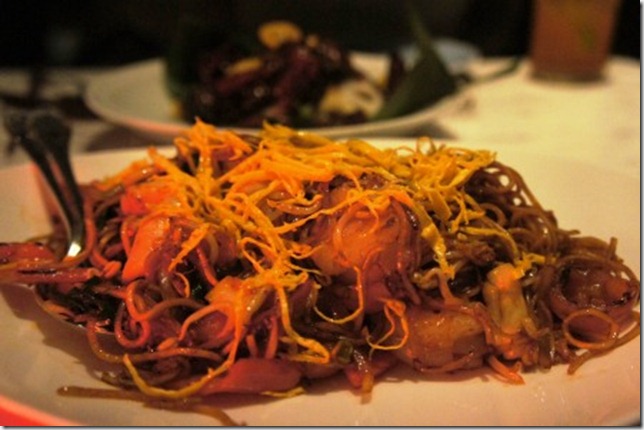 With this we chose braised pork.

The pork was so smooth. So tender. Slithered on your palate, making it dance and unwind the way your body would in the hands of a good masseuse. The pork was cooked in a honey barbecue sauce which gave it an Oriental sweetness and yet not overpoweringly so. 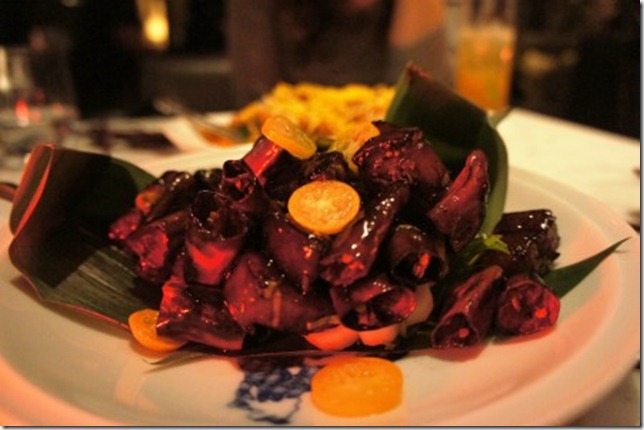 Rajesh explained that the pork was tossed in roasted Thai dry red chillies and a citrusy mandarin like fruit which Joanne clarified on Facebook was called kumquat. I didn’t catch this earlier when Rajesh explained it.
Rajesh smiled and said that the sweetness of the pork, tart of kumquat and heat of the chillies were supposed to give you a varied taste experience. The combination was sublime.

K warned me about the heat of the chillies. Though this was child play after my recent Laal Maas at Jaipur and then green chillies on baked beans at Flurys, Calcutta. The chillies gave a woody taste to he dish while the kumquat darted through like an electric current.

The food was so good that I had to write about it tonight itself. The cost slightly below Rs 4,000 (100 USD) without alcohol or desserts. But then this was a good day at work and warranted a special dinner. 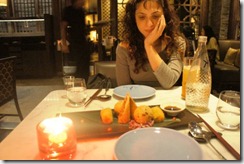 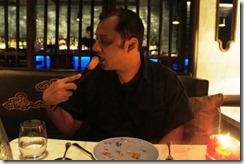 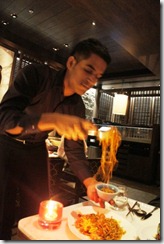 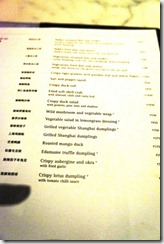 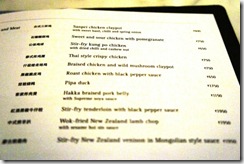 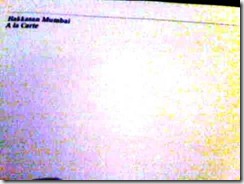 I had earlier picked up some twitter buzz earlier protesting against a mass media reviewer who said that the food at Hakkasan was ‘bland’.

The food was so flavourful tonight. Like an Oriental dervish which whipped up your senses into a state of frenzy and left you smiling well after the meal.

At the risk of being impolite, calling the food at Hakkasan ‘bland’ is well… moronic.

Finely Chopped I think it's kumquat...thank's couldn't get what the waiter said but he said it was 'like a mandarin'

Rujuta said…
Hi..
First time here...Loved reading ur blog..I felt as if i was visiting those restaurants :)
Keep up the good work..
How about reviews of restaurants in Pune? (bcos i m from Pune)
Happy Blogging
Rujuta
27 July 2011 at 11:41

Jitterplate said…
It's not 'pawns' as people on twitter say. :)

Kalyan Karmakar said…
Hi Rujuta, glad you liked it. Unfortunately haven't been to Pune in ages. Will make up for it someday

Thanks Snickersee, as a virtual friend said today 'goes to show that the internet was invented after I was 20'. :) Changed it

Gaurav said…
been wanting to go to Hakkasan for a while but just havent been able to get out much.

Kalyan Karmakar said…
@Gaurav...I don't know who said it but I remember Rushina protesting against some reviewer who made this comment but I am not 100 pc sure.