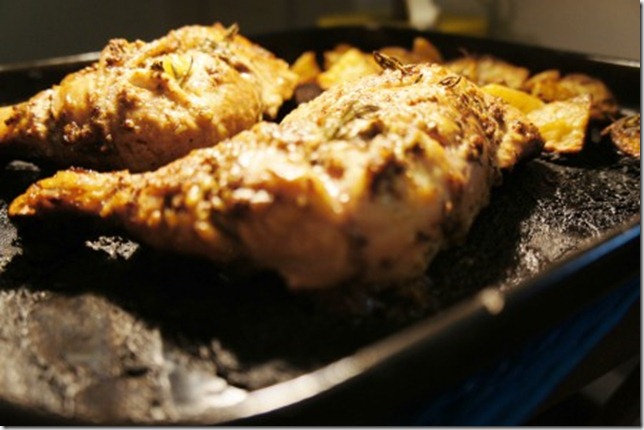 Kainaz got me an OTG and from then on I was out of Mumbai. Jaipur first. Then Kolkata. We bought it from this electronics chain which uses a 'consultant'' plank in their communication. I have no idea why for its like buying it from a warehouse.

The OTG was still kept in the drawing room when I returned.I got hold of the electrician, got a plug and the newest member of our kitchen was put in its place. I had always thought that the first thing that I would make when I got an oven would be to bread. Except that I chickened out, pun intended. I decided to take baby steps and begin by grilling some meat. More specifically chicken.

Now, as K pointed out, I know as much about ovens as Stewie does about sex. So all I had to bank on was K’s stories of putting cheese on chicken and then in to the oven when she was at school.

I asked around a bit on twitter and Facebook on time required and temperature. Ironically almost all the answers I got were from men.

Have women handed over the grill to men? Or are they just plain insecure?

Well bad luck ladies because barbecuing is a man’s thing. And with that bravado I launched into the first dish. Grilled chicken. Learnt from it and then the next day grilled tenderloin. This is going to be the week of grills at our house.

Here are the first two. Both oil free. 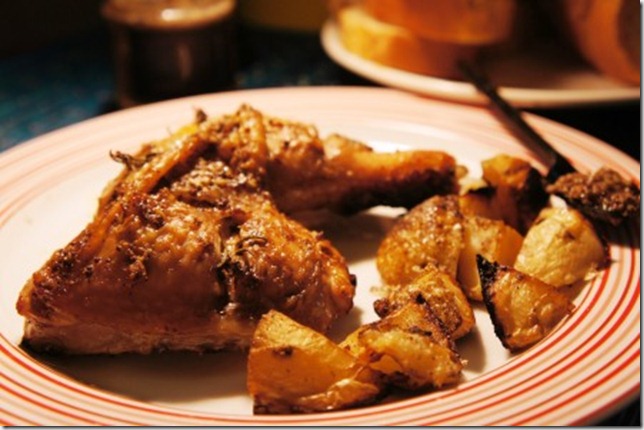 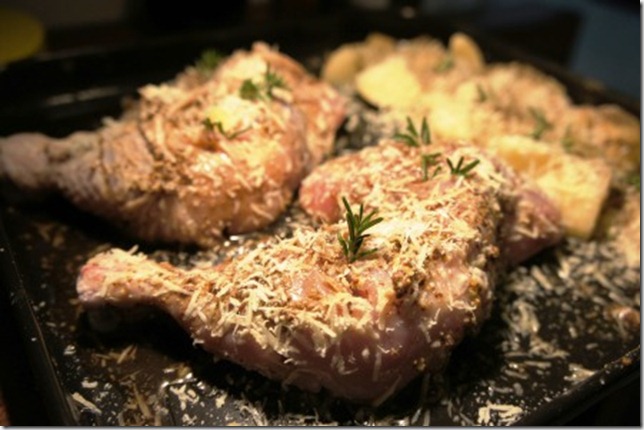 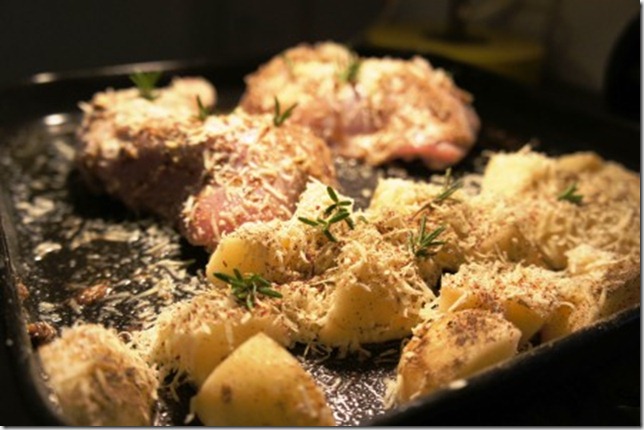 Kept the tray in for another ten minutes before taking it out.

Got psyched in between as smoke started coming out of the oven and through the entire cooking process. We panicked. Then folks on twitter assured me that this happens.

Apparently when it comes to OTGs the first time is smokin hot. 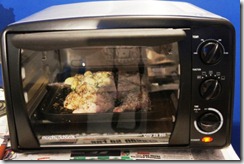 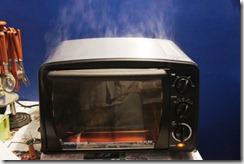 Results:
The chicken was cooked to perfection. Browned well. Extremely juicy. And unlike in the micro it had not emitted water. I loved the way the marinate came together. The mustard, the cheese, honey, rosemary … none out shouted the other. The flavours had spread across the meat. 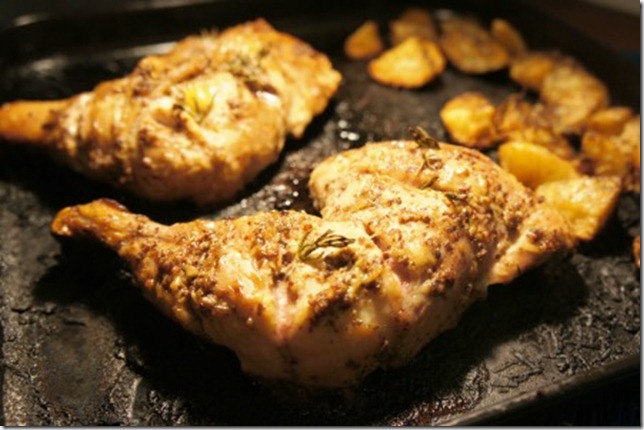 The potatoes? Well they turned out to be burnt at the bum. Possibly because they were a bit too dry. However, tasted nicely baked once you scraped off the butt. 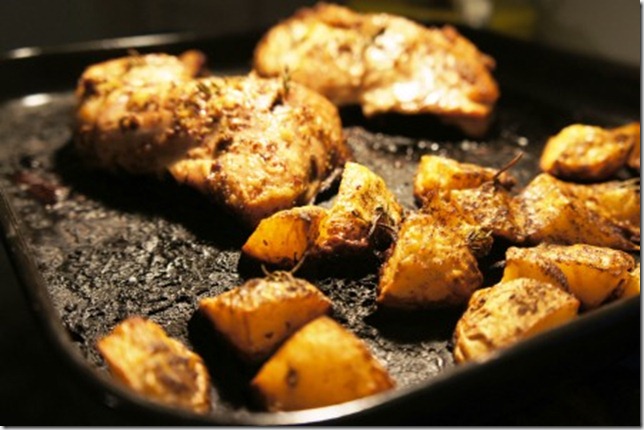 Learnings: Place the food on a cooking foil so that the tray doesn’t get dirty.

Excited by the previous day I had decided this to make a grilled dinner week. Alternating between red and white meats. I’d never cooked beef before.

Turned out I was at the right place to prepare for it.

I stopped at Jude’s Cold Storage, Bandra, for tenderloin. The helpful owner pointed me to Modern Stores owned by vegetarian Gujaratis to buy beef tenderiser. He also told me that curd and ginger are garlic are used as marinates for ‘our style of cooking’ and wine or vinegar for Continental. If I remember right the Catholic owner of Jude’s is actually vegetarian. I think his wife told me once at the shop. He then pointed me to his brother’s shop, Jude’s Wine, for cooking wine. Where, after much discussion with his sister in law I picked a tiny bottle of local Port. And then hot samosas and jalebis at Punjab Sweets to go with the rain.
I love Pali Naka. 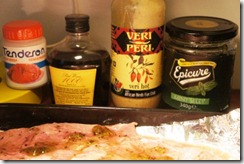 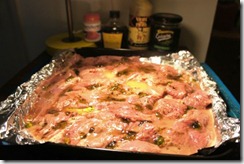 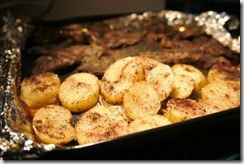 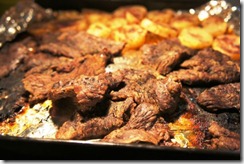 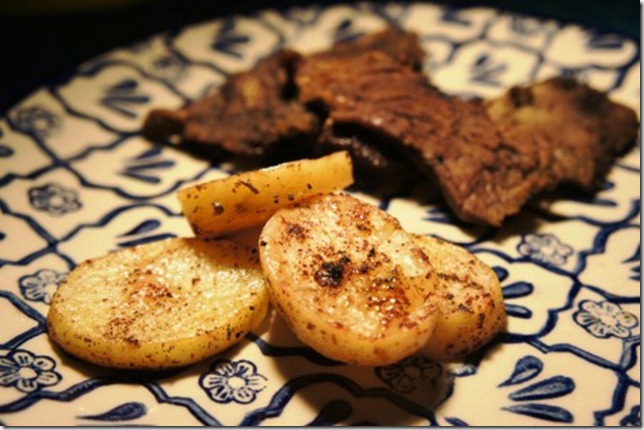 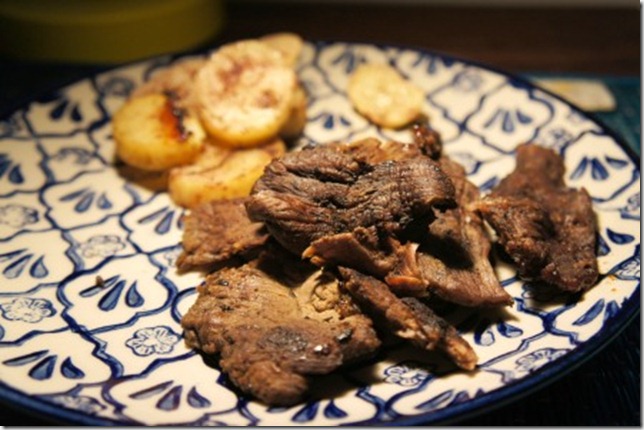 Learnings: The foil helped but next time I should put some oil below the foil so that it is easier to take the darned thing off. Tandoori chicken next

Here are some of the FB/ twitter help that I got. Thanks folks

Finely Chopped
Plan to inaugurate the OTG with basic grilled chicken. any tips on how long, what temperature?

83 ImpressionsRaw number of times this story has been seen on your Wall and in the News Feed of your fans · 8.43% feedbackNumber of comments and likes per impression
Sunday at 15:54 ·LikeUnlike ·

Rini Simon Khanna ‎...and why didn't you line the base with foil?....would have saved the burn...


Need help deciphering Morphy Richards OTG controls. Manual doesn't explain. And I bought it Croma. 1 button with a line below, 1 with line on top, 1 with both, 1 with a rod which I assume is rotisserie


Rhea Mitra-Dalal there must be a heat element above and below. So the line above indicates only the top element in use - perfect for browning and grilling. The line below will indicate only the lower element heating up and the knob with both will have both elements heating up at the same time :)


Rhea Mitra-Dalal try all settings and see..the element itself will glow red once it heats up, if it is not covered and is visible

Finely Chopped Thanks Rhea. So for the sort of cooking I have done so far I guess it must both. Line on bottom is for baking?


Rhea Mitra-Dalal Yeah, I guess so...but for cakes I usually have both on. Need a more professional opinion on this one :)

Claudia Tanna If you wanna brown something or melt cheese in a bake, you will need more or only heat from top.....if you have a heavy fruit cake that tends to burn from top, after half baking time you switch to bottom heat only etc! ;)


Naveen Bachwani Rhea is right in her first comment. You'd use only bottom element when you're basically warming. You can also switch to it periodically (from both on state) when you want the top of the dish to not overcook (eg. cheese topped bakes, etc.)


.Rini Simon Khanna All above correct...the options will be warm, grill, bake and roast...alternately use this to read the manuals

Anonymous said…
Super!!! Ur Grilled plates look Great :)
I always wanted an Oven, but instead got a microwave with grill & convection options instead when I was recently setting up my kitchen!! It's not the same...I still wish I had an OTG...
Nonetheless, time to do some grilling, albeit in the micro with Grill!!
- TD
26 July 2011 at 10:15

S Rajan said…
To bake potatoes: prick skin lightly with a toothpick; wrap in silver foil and then place in the oven - other wise they will dry out.
to roast: par boil halved potatoes then lightly coat a baking tray with olive oil or fat if you want to be decadent. Let the oil get hot in the oven then place the halved potatoes in the oven to roast; turn once or twice.
To tenderise beef: get a meat mallet and bang the hell out of it. Light coating of olive oil a few garlic slivers; cover in cling film and leave it in the fridge for a couple of hours. Better the quality of the ingredients the less you need to do to it.
26 July 2011 at 10:36

Kalyan Karmakar said…
@TD, thanks :) We bought our micro a while back. Just has a grill not a convection. Decided to go for the real thing while one had the chance

@S. Rajan: thanks for the tips...need to get a beef mallet now

rm said…
try this.
grease a glass dish with ev olive oil. slice potatoes and coat with salt and olive oil. bake for 20 mins. cover with slices of sole, finely chopped tomatoes, oregano and chopped olives. sprinkle olive oil over each layer.Bake for another 20 mins.
26 July 2011 at 14:12

S Rajan said…
Forgot to say: when roasting chicken; brush with butter and then cover with two strips of fatty bacon. That will keep everything moist.

Gud fashion said…
Hi
I ve otg oven morphy richards 35 rc ss. Got it from my mom who got it as a gift and she never used it.now when i connected it to stabilizer it fumed anf stabilizer failed. What type of electrical equipment plug or stabilizer is required?? Kindly advise
1 December 2015 at 23:54