KK: The first post of this series covered Calais, Brussels, Holland. This one’s on the next stop. Germany. Over to Mom:

Our next destination was West Germany. At that time East Germany was not very easily accessible as the famous Berlin Wall had not fallen down. So we had to be satisfied touring only W Germany.

The diplomatic relationship between India and W. Germany was very good at that time. (I think it is so even now). The Indians did not need any visa for going to West Germany.

At night we stayed in a place called Bochum. Next morning, we started for Bonn, the capital of West Germany.

Bonn is a wonderful city. The buildings are a mixture of modern and old architecture. First, we went to the market square. From there we went to see the famous composer and musician Beethoven’s house. I have been very fond of Beethoven’s music so seeing his house made me very happy. 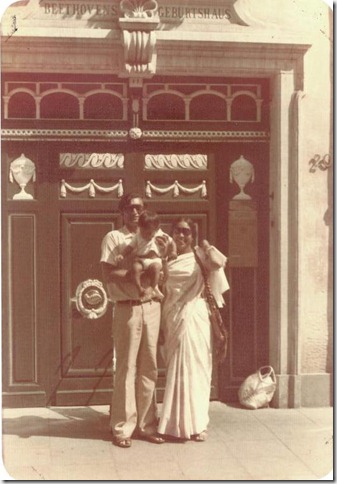 Frankfurt & then Heidelberg and its Frankfurters

From there we went to Frankfurt. On the way we saw the famous river Rhine. Frankfurt had many big buildings. But quite a few of them were partly damaged because of the bombings of the 2nd world war.

On our way to Heidelberg, a tourist centre, we stopped at a place for lunch. There was a van, like the Ben fish van in Kolkata. It was selling sausages and hot dogs. Sausages were in all shapes – big, small, thick and thin. We ordered for some hot dogs i.e. long bread rolls with sausages inside. These sausages were spicy and tastier than the ones we had in England. The foodie, in K’s dad, made him detect the flavour of ‘dhania powder’ (ground coriander seed) in the sausages. He kept asking me if it was so. I was too engrossed in eating to think of what went into making it. So I answered only in monosyllables thinking let the foodie take care of the ingredients while I enjoy eating it.

(KK: Uncannily history repeated itself a few days back at Hakkasan, Mumbai. I kept telling K that I detected an ‘Indian’ taste in the duck dim sum while she chomped away unconcerned. Later found it had cinnamon)

With Father Christmas at Stuttgart

After lunch, we started for Munich in West Germany. It was a long a long and tiring drive. It was getting dark. By that time we had reached only up to Stuttgart. We had not found a shelter for the night yet. Suddenly, we heard the sound of a ‘bang.’ The car hit a wall in a blind alley. We hurriedly came out of the car and found it was a minor accident quite common in such long drives. But the problem was that we had a baby with us who was hungry as well as tired. We were trying to think how to handle the situation. At that time, an elderly German gentleman, of about sixty, came out of a nearby house. He first examined the front portion of the car. Then he looked inside the car and saw K.

K’s dad asked him about the nearby police station and a ‘bed & breakfast’. The gentleman did not understand a word of what K’s dad said. He thought deeply for a few moments. Then he looked at us and ordered like a German officer in a war movie, in broken English, ‘Follow me’. He did not even turn back to see our reaction and marched forward like a general. As we had no option, we followed him with baby K. T

he German gentleman immediately got some milk for K. Then he offered us some food and coffee. After thanking him, we were about to leave. But the gentleman did not listen to us and insisted on our staying in his house at night, through sign language. So we stayed at the German gentleman’s house that night.

This incident made me realize that humanity transcends all language barriers and nationality. Next morning we left the gentleman’s house at Stuttgart and proceeded towards Munich.

The police of Munich organise a re-union at Munich

Soon after we reached Munich, K’s dad told me that one of his childhood friends was in Munich but he did not know his address. Whoever would have known the address of the NRI friends? That was not the age of mobiles, internet or Face book. K’s dad thought of asking the police the address of his friend. German police knew the whereabouts of each and every person even though that person was not a culprit. Suddenly, out of the blue, K’s dad discovered his friend. Excited, he called him loudly, ‘Shankar! Shankar!’ Unbelievable it may seem, but it really happened. His friend was surprised as well. He did not let us stay in any hotel and took us to his house and introduced us to his newly-wed wife. This friend was not a doctor but worked in some office. At night, men tried their culinary skills and after that we talked and talked… 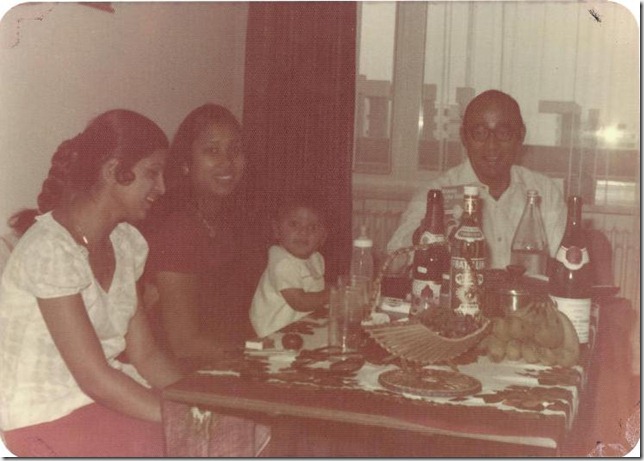 Since we had a car with us, we went on sightseeing on our own. First, we went to the famous University of Munich. Then we visited Macmillan House. We saw many beautiful churches as well.

Last of all, we went to the Olympic Stadium, where the FIFA World Cup final was held just a few weeks ago. We got down outside the stadium and stood for a while. I found later that I had scribbled at the back of a picture postcard that Munich was very developed. It might have been developed and spruced up as Olympic Games and FIFA world cup final were held there.

To be continued…Austria coming up

hamaarethoughts.com said…
Wow! such good memories and great people..hard to find nowadays.."K" say hi to your mom such a sweet personality!
:)
3 August 2011 at 03:42

Rujuta said…
Wow...your mother has a terrific memory and remembers all the small details also during the travels...
The travelogue is very well written... I esp enjoyed the story of the kind German gentleman who helped inspite of language barriers...
Please tell your mother that she has a fan following now eagerly awaiting her next post :)
3 August 2011 at 10:20

Me said…
Again a beautiful read..! Its amazing to know how things were and how they have changed, as Aunty said that despite technology and social networking not there then, they could still figure their way around and the fun was in the adventure...sometimes one thinks whether technology makes simple things in life more complicated..but then we would not have been a part of these memories if not for technology!

reema said…
awesomely written piece! The part where your mum refers to the kindness of Germans,I could relate to it. Indians can be found in any part of the world. i have started following your/mum's writings very recently and love your take on food....its different!
5 August 2011 at 19:39

Shivani said…
It's amazing how much your mother remembers & has pictures to go with every memory. Loved this account. As someone who's recently moved to Germany, I can vouch for the fact that Germans are the friendliest Europeans :)
7 August 2011 at 15:20