on August 19, 2011
“The first railway line in India was between Bombay to Thane. A distance of 35 km. Services started in 1856. Lord Dalhousie was the Governor General of India . ” 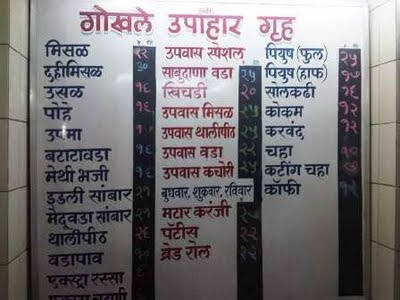 Don’t hold me to the facts here but I remember learning this line in history in school when I was in the fifth standard.

That was the first time I heard of Thane. Little did I know that more than three decades later I would be at Thane eating dishes that I had never heard of when I was in school at Calcutta. Nor did I know that Mumbai would be my home.

Would be interesting to see how things are thirty years later. I am not going to place any bets.

I landed up at Thane recently for meetings. I wanted a bite before the long ride home when I last was there on Friday. Thane has many malls. I was very clear that I didn’t want to eat in a mall. Deepak, my colleague, who has grown up in these parts took me to one of his favourite joints. No, not the famous Mamledar with its very spicy missal paos.

This was a small shop called Gokhale Upahar Griha (Gokhale Snack House) at Thane’s busy Gokhale Road. This was my second visit there with Deepak. The first good enough to make me want to go again. On both occasions the place was packed with locals.

The best advertisement ever for an eatery.

There were three of us including one Maharashtrian in the group. This was his food after all. Deepak is a Marwari and I am Bengali. But that's Mumbai.

We ordered everything in sight.

Missal pao – mug pea gravy spiced just right with farsan or gram flour crackers giving the dish a rare contrasting crunch. Very few Indian dishes show such multiplicity of textures. And then there was the ‘upvas’ or fasting missal. In Maharashtra ‘fasting’ is not of the Gandhian or Anna Hazare sort. You just avoid certain dishes. The upvas misal was made with sabudana – sago – and had a very delectable gravy which was seasoned with curd. Had a nice cooling effect. The upvaas or fasting missal had potatoes in it - both boiled and fried potato straws. Fasting here is apparently high in calories!

I have had missal paos before. The one at Upahar would rank with the best. The upvas missal was a new experience. 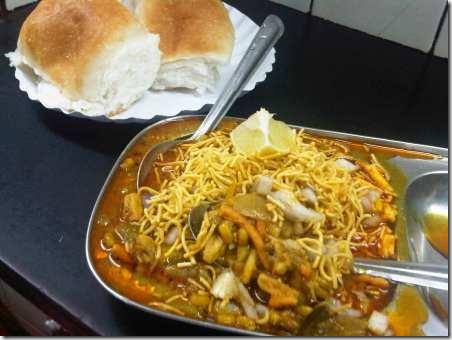 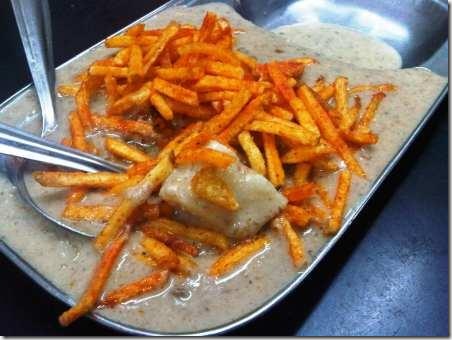 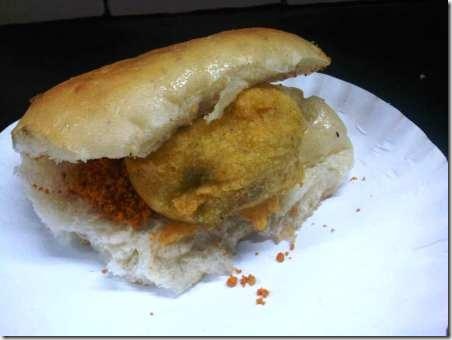 Methi bhaajis or methi pakoras, so fresh that they didn’t tax your tummy despite being deep fried. The sort of stuff stuff a grandmother would make for you. 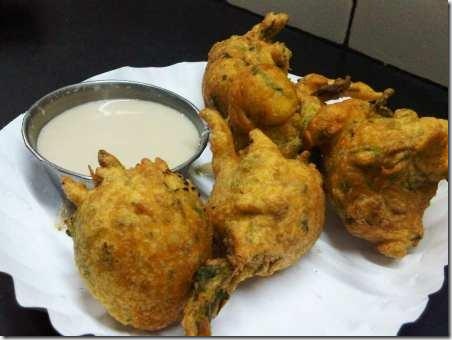 Sabudana vadas or deep fried of sago. Always sticky whenever I have tried it it before. ‘Stick jaws’ that I normally avoid. At Up-ahar they were made perfectly. Giving in lovingly to each bite. I actually enjoyed sabudana vadas for a change. 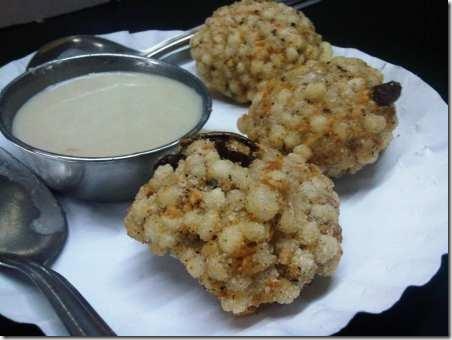 The thali peeth was another pleasant surprise. I didn’t like it at Mumbai’s Prakash. Thought it was burnt there. The ones at Up-ahar were like nice crisp puris which were soft inside. In fact the food here was largely better than Prakash. 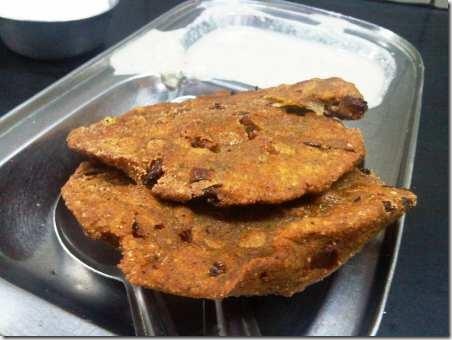 There was no poha to compare with Prakash though. But the boys told me that you should never order poha in the evening in any shock. Likely to be leftovers from the morning.

Kokum juice, the local drink made with juice of the fruits of the kokum tree, as Saee points out in her comment, found at Maharashtra was just what one needed to tuck oneself in after a lovely meal. This is even used in curries as Amba told me at Pradeep Gomantak.

Deepak went for this purple coloured drink. The rest of us went for the sweet, but not heavy or thick, Piyush (creamy one). Again one of the best I have had. Er, the earlier time being at Prakash. 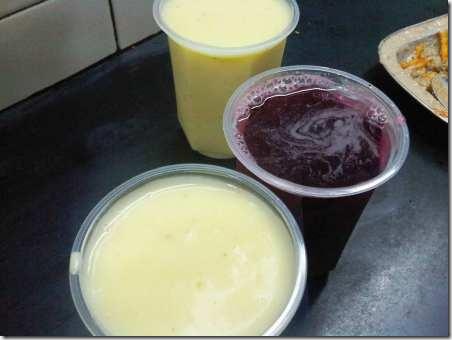 Stopping to eat before the long journey back was a wise one given that it took my 50 min that Friday night to cross a kilometre between Pridarshani Park and Sion after I came out of the Highway. Two hours to reach home by car.

Lord Dalhousie was a wise man. 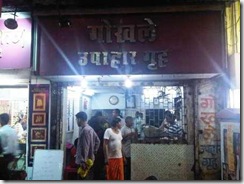 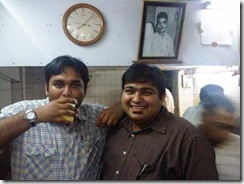 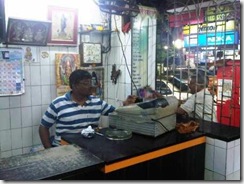 Note: Finely Chopped was featured in a recent article on Blogging in Delhi’s Hindustan Times. Here’s the link if you want to read it   http://tinyurl.com/3cgffpn

One more thing. We have become shorter. 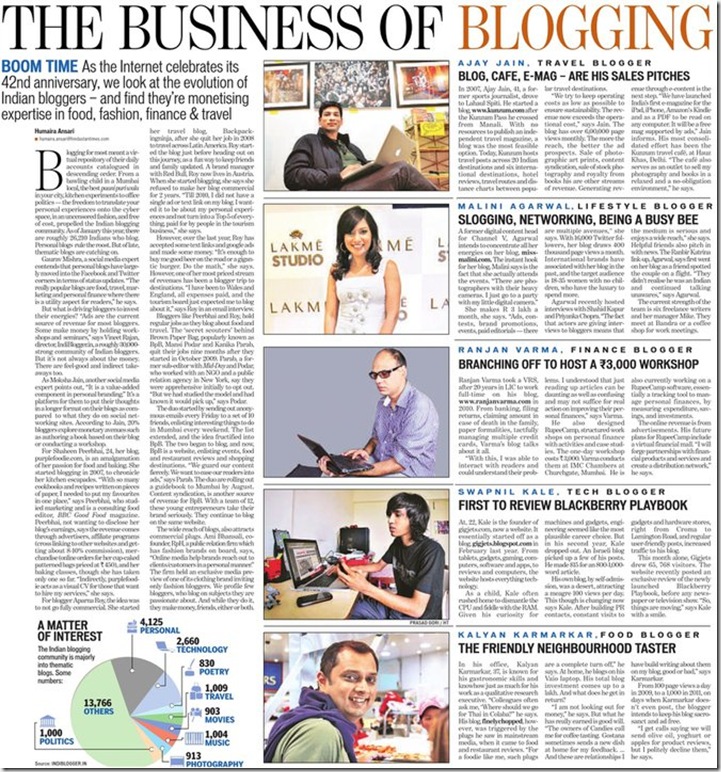 jjs said…
Congrats. love the blog.everyday i check, and if no new write-up is there,seems something missing from life.
19 August 2011 at 22:40

@jjs: sometimes I wonder if I spent too much time writing. Whether I write too much. Do I waste my time. That of others?

Saee Koranne-Khandekar said…
First, great going with the new domain and being written about! YOu deserve every bit of it!

I love Gokhale--it is our go-to for a quick, deep-fried breakfast, and it is the only place where I drink piyush--I like that it is not too sweet and the nutmeg is just right. Btw, the kokum sarbat is made from the fruit itself; the seeds are discarded. It's a beautiful process. The plum-like fruit is halved and stoned, then the pits filled with sugar and placed in large jars. As the sugar melts, it marries with the juice and you have a kokum concentrate. The shrivelled shells are often used in cooking as a souring agent.
20 August 2011 at 08:56

Ugich Konitari said…
Delurking to congratulate you on being featured in HT as well as acquiring your own domain !

If you ever get a chance to be in Vile Parle(East) do check out "Mi Marathi",near the Parleshwar temple, and try Zunka Bhakri there.....also "Bhajanichya purya" , the latter are made in homes, but rarely in eating places outside .
20 August 2011 at 10:57

Reeta Skeeter said…
Usal and Misal are treats always...somehow don't like the kokum juice but i always try it thinking this time i "might" like it...the cutting chaha and bun maska at any corner in Maharashtra land will always rejuvenate your energy...and my mom makes the BEST sabudana vada ever :D
Soon, will visit Maharashtra just to eat :D
Jai Maharashtra!
20 August 2011 at 11:14

jjs said…
hav been following the blog since 2001. check everyday. ur help was great in mumbai, now i am promoting ling pavilion in delhi. ll be bothering u when i ll be in kolkatta, in the last week of September. any plan of urs to come to delhi/gurgaon.

Thanks for writing in Ugich. Vile Parle is closer and will definitely keep my eyes open

Thanks Reeta and any chance of getting hold sabudana vadas from aunty?

Thanks JJS. appareciate it. I went to Gurgaon for a quite a few day trips sometime back but not off late unfortunately
21 August 2011 at 12:32


We bumped into your blog and we really liked it - great recipes YUM YUM.
We would like to add it to the Petitchef.com.

We would be delighted if you could add your blog to Petitchef so that our users can, as us,
enjoy your recipes.

Petitchef is a french based Cooking recipes Portal. Several hundred Blogs are already members
and benefit from their exposure on Petitchef.com.

To add your site to the Petitchef family you can use http://en.petitchef.com/?obj=front&action=site_ajout_form or just go to Petitchef.com and click on "Add your site"