What’s with this reliance + broadband dongle? It is supposed to be fast but limps whenever I come to my room at Kolkata which is in a well populated part of South Kolkata. Has been a pain tonight.

The drive out of the decrepit airport was down Rajarhat. A place which with its interspersed green fields and surreal glass and chrome buildings seem so unlike the Kolkata one knows.

Moving on to the ‘By Pass’ which was once different to the city, but now more chaotic, bumpy and with character in comparison to the Jetsons like New Town. The By Pass was bumpier than before. The driver of the cab, not a man of humour, replied that it was because of the rain when I asked him if the roads became worse with the change of government here.

And then we passed Ruby Hospital and entered the deep South as I headed towards Bagha Jatin where I had some work. Suddenly I saw a Golden Shiraz restaurant and asked the driver to stop. I had no idea where I was and yet jumped out.

I went up and placed my order for egg chicken roll and then did a James Bond and added “onions fried not raw’.

I stepped back and took in the commotion at the counter. A middle aged lady was quarrelling with another customer who was buying quite a few rolls. She felt that she was being unfairly asked to wait while this gentleman was getting a bevy of rolls made.

The argument heated up. Beside them an elderly Muslim gentleman, with a white beard, smiled benignly and read the Quran.

Yes, this was more like the Calcutta I grew up in.

“Don’t you have sisters and mothers at home? Talk properly with me” said our lady to the rather perplexed gentleman, who to the best of what I could see, was being fairly civil.

But then we Bengalis are passionate about food. Even I would get edgy if I had to wait for my rolls.

Except, I didn’t have to. My roll was put together with the gentleman’s consignment while our lady fretted and fumed. Perhaps I had ‘out of towner’ written on me.

I couldn’t wait to reach the car and took a bite of the roll.

What an explosion of flavours and tastes. The textures of chicken, never my first choice, the egg I usually avoid, and the crunch of the paratha came together in Holy Matrimony. This was such a phenomenally good roll. So juicy, so passionate, so full of love. It was the best roll that I had had in ages. The sort of celestial taste experience that makes it difficult for me to take street food in other parts of India seriously. The was a fistful of sheer indulgence and hedonism. The good life.

I looked up, smiled. Felt happy and content. The look on my face said ‘baby I am home’. 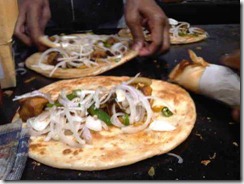 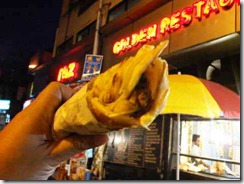 For those interested in the details I later found out that we were at Santoshpur. A place called Ajaynagar apparently. And this work of art cost Rs 35 versus the 90 Rs I paid for the mutton roll at Bandra yesterday. I often feel that I am on a different currency at Kolkata. Food is so much cheaper here. And better.

And then come Monday I’ll leave.

Soumya said…
That particular Shiraz has fab rolls. Their biryani is also very good. Have family in that area and it is the favorite spot for a late night bite.
24 September 2011 at 15:15

Ankan said…
This is one of the best posts ever! And more so as it comes right from the heart and an eager tummy :)
BTW, the word verification below the comment is "socal". Actually! This post is "So Cal" :)
24 September 2011 at 20:04

Kalyan Karmakar said…
@Soumya: fab indeed...best i had in a while