Cold Turkey … The day after the shoot

on September 17, 2011
It took me a while to get adjusted to not having two cameras focused on me. The smiling producer, Patrick, prompting questions from in between the two cameras manned by Mike and Carla AKA ‘Harrison’. Having an entourage with me and a crowd gathering around us to see what was going on. That stuff is so addictive.

Yes, the shoot got over yesterday after a two day long fairy ground ride. It’s over and that’s still not sinking in.

I had a fantastic time. Right from the when I reached on top of the terrace at The Majestic and met the crew for the first time. First interview with the majestic VT in the background. The moment I reached. No pancake or time to check your hair or face.

Then off to Bohri Mohalla to explore its hidden lanes with the crew. Rotis, baara haandis, khiri, tandoori and koftas.

The same warmth and sense of familiarity that we saw at Bohri Mohalla followed us the next day at Fort’s Khao Gulley. Walking past the lanes and carts that I used to wander around for four months while I worked there. Alone, camera in hand.

This time with a crew which snaked into double digits. Vada pao, lassi, sandwich, pao bhaaji, chai, jalebis and a Holy Cow.

Crossing past the crazy traffic into Juhu Chowpatty. Gone was the warmth and hospitality of old Mumbai. Here we were hustled. ‘How long will you take? What will happen to the business I lose?” Yes the suburbs are cold and Juhu is cut throat.

After the Bourdain-like walk earlier past the stalls at Khao Gulley I had to do a Halle Berry-like walk up the steps to come into the frame with the sea in the background. Shooting at Juhu Beach. Something every outsider who moves into the home of Bollywood dreams of.

Goodbye to the crew and a last dinner at the rarefied five star climes of the Thai Pavilion enjoying Thai Street Food including some awesome soft shelled crabs and green curry that never fails you here. Lapping onto each word of the well travelled and much experienced company at the table. I was like a wide eyed kid sitting with the grown ups.

Yes, it is still difficult to believe that the shoot is over. The same sense of emptiness that one would get as a kid when the Durga Pujas got over. The two days had been such fun and there was so much to learn.

This was a shoot for the Mumbai segment in an episode on street food across the world for The Travel Channel. The Channel whose shows inspired me to begin writing more than three years back.

It was like making your debut at the Lord’s.

The crew ended with Mumbai after a 27 day journey shooting across 7 countries. It will close to the beginning of this year by the time I might get the tapes of the final episode.

Till then there are some pics which we took from the phone. (the earlier pics are some of the official shoot pics which I just got from Patrick)

And thanks all for your well wishes. Wouldn’t have been there if it wasn’t for Finely Chopped, all of you who inspire me to write with your comments and of course Shanky who put the production folks on the to me. 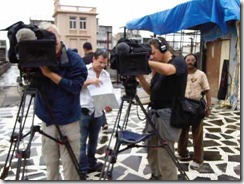 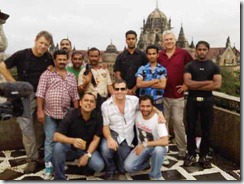 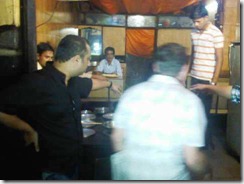 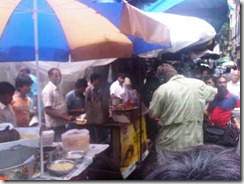 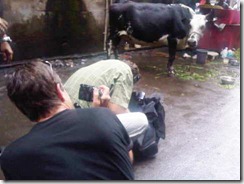 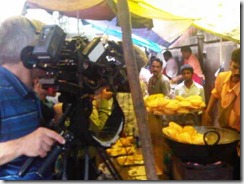 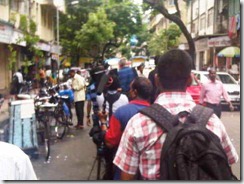 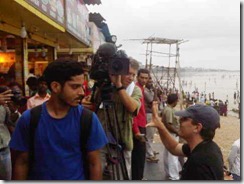 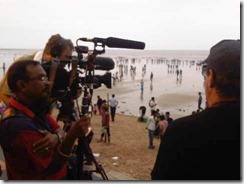 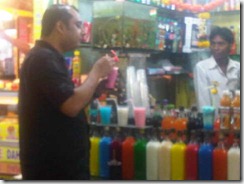 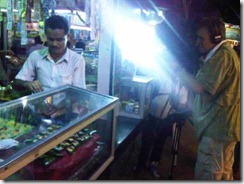 Blackberry Boys From the hip

Unknown said…
Kalyan: how exciting! Congrats from still one of your biggest fans.
17 September 2011 at 13:08

Kalyan Karmakar said…
@Sandeep: thanks a ton...I knew you would be happy and the fact is you are the celeb...not me :)

@Shreya: thanks ...that's very kind of you

@Tanmay: thanks sir..the moment I get to know. First in the US though

Miri said…
Love the grilled fish and its simplicity - esp the peri peri marinade
18 September 2011 at 15:10

Kalyan Karmakar said…
thanks Miri. Have done that quite a bit with chicken too
19 September 2011 at 00:53

Sassy Fork said…
Congrats! Here's wishing you get your own show on TLC..FINELY CHOPPED ADVENTURES!
28 September 2011 at 16:27