I still can’t believe that I hadn’t been to Ling’s Pavilion after spending a decade at Mumbai. The Sassy Fork took me there one day.

Today, Johnny our favourite waiter there, marvelled at how seamlessly we ordered. Not the usual chaos that follows when large groups come to restaurants. To start with, there were no vegetarians. As Johnny said, “I am allergic to vegetarians. And they argue over broccoli, corn, mushrooms…. too much.'” 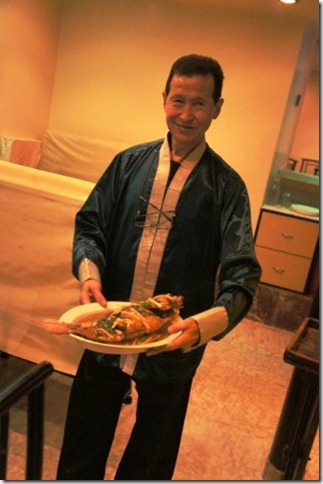 By the way if any of you are from the 80s then the name Johnny might remind you of this song: 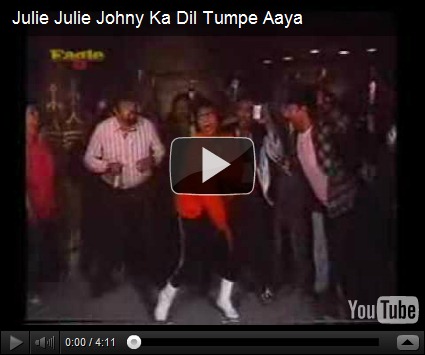 As I told Johnny any one of us could have ordered today and yet we would have all been satisfied. That’s how connected our group of ten were.

I have written about Ling’s before but had never photographed the food with my new camera. Plus the lighting there is a challenge. So I took the camera today. The results were quite satisfying barring the first shot of the prawns.

So what follows is a bit of a photo post. 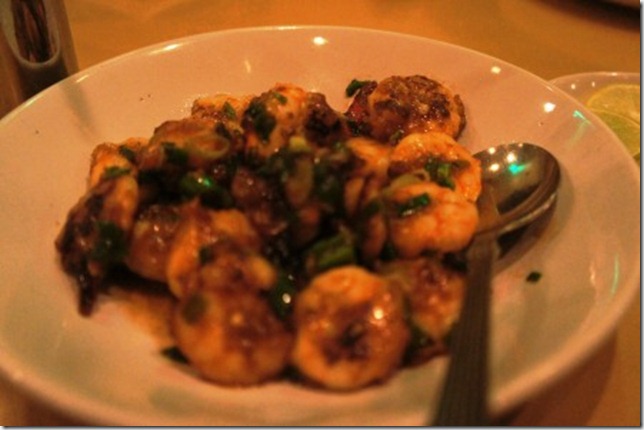 A very authentic Hainanese Chicken Rice. You have to book this a day in advance though 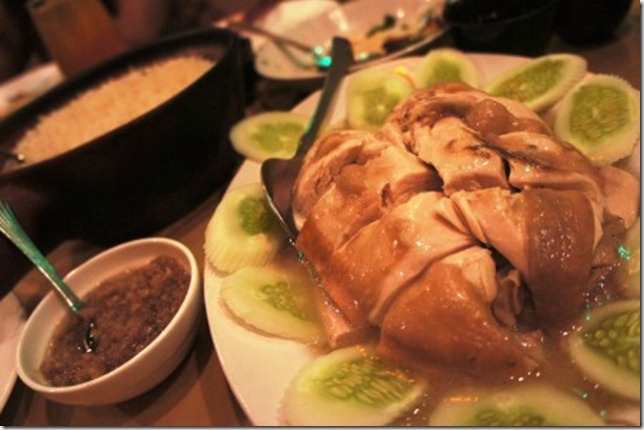 Pork soup dim sums. A great discovery through our friend and Ling’s addict @qtfan (twitter). You have to add vinegar through the hole on the tap. A Chinese phuchka? 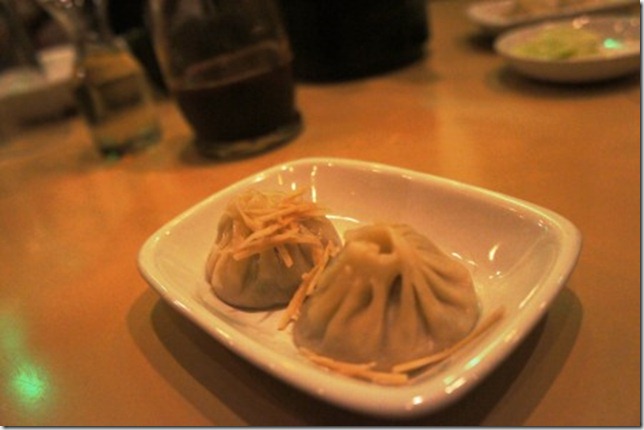 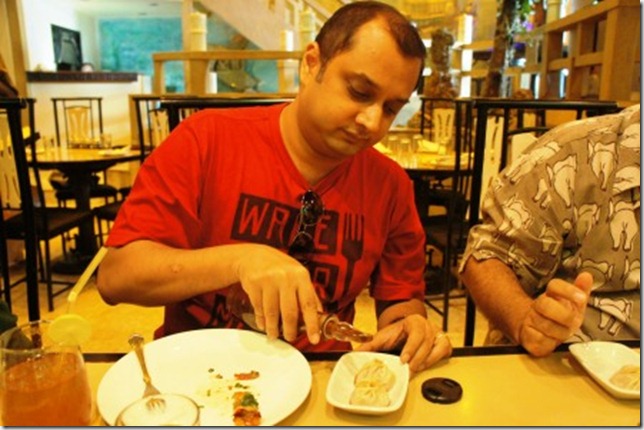 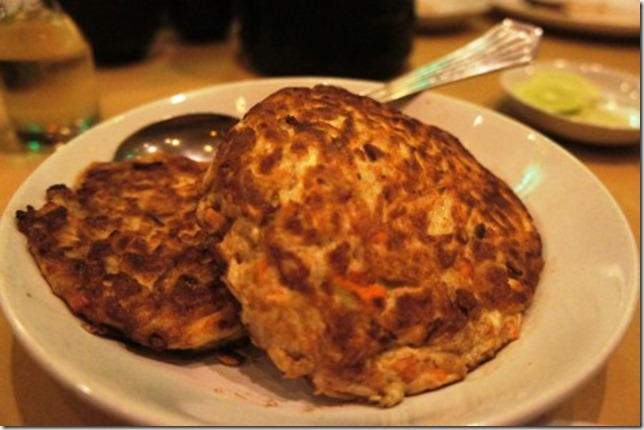 Pork belly with bean curd and shitake mushrooms. The dish of the day 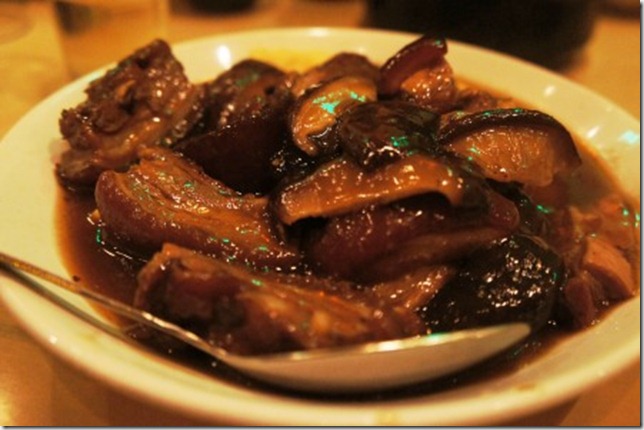 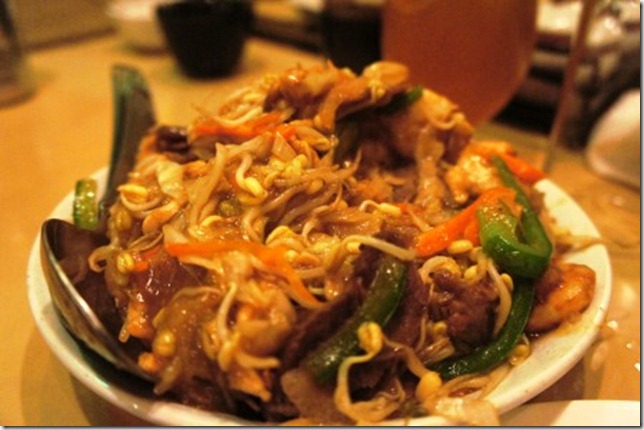 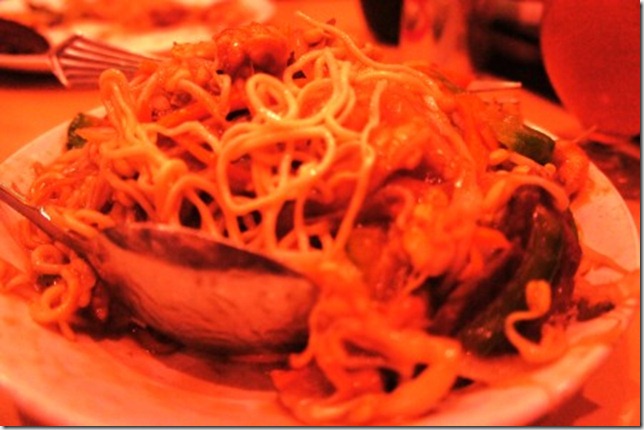 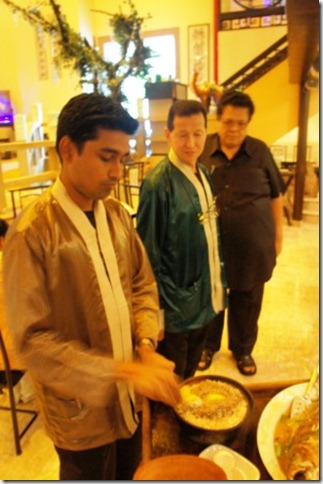 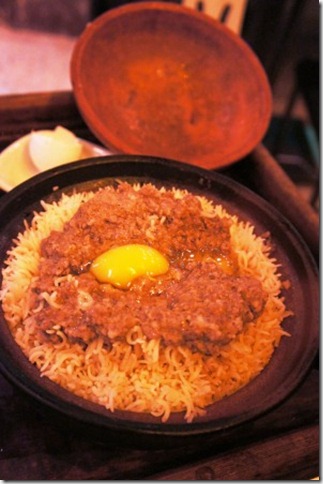 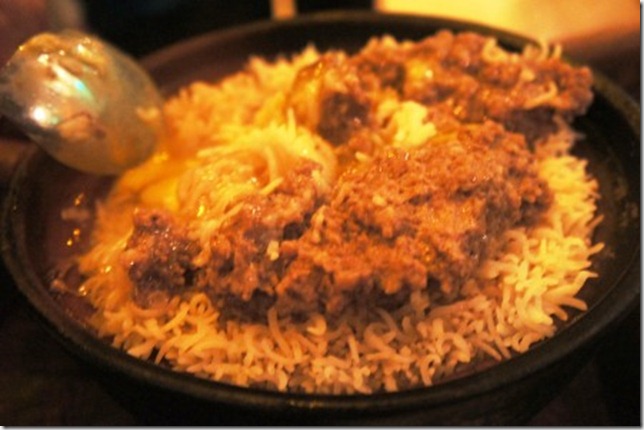 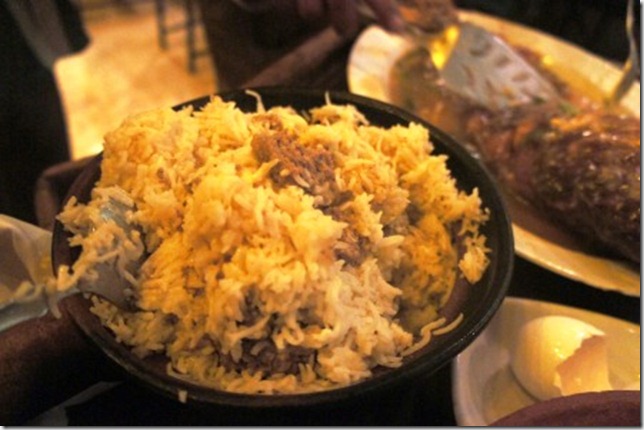 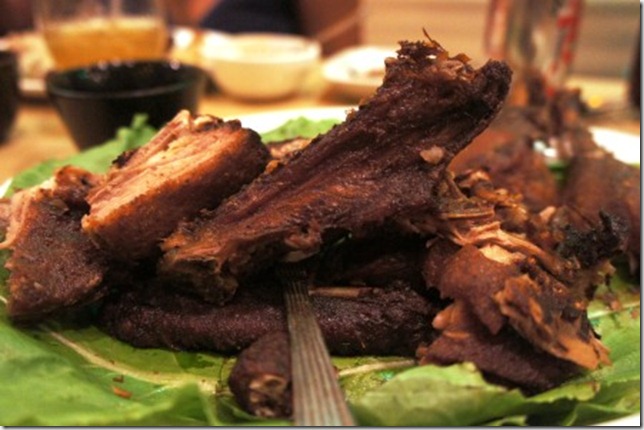 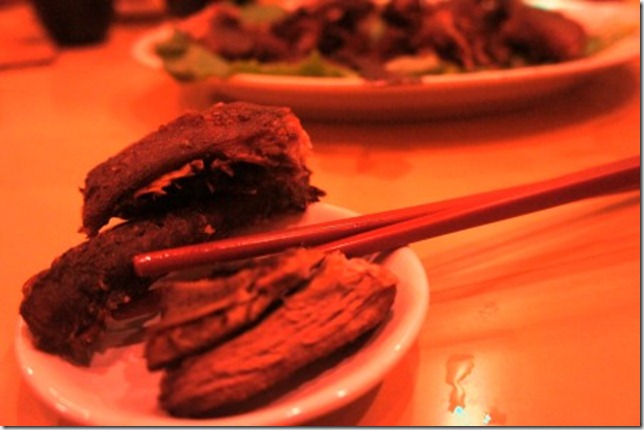 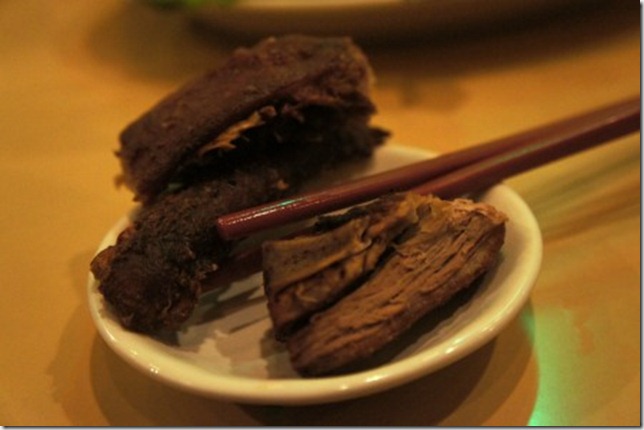 Red snapper in oyster sauce… ho hum. Like a Bollywood blockbuster. Big, colourful… forgotten once you step out 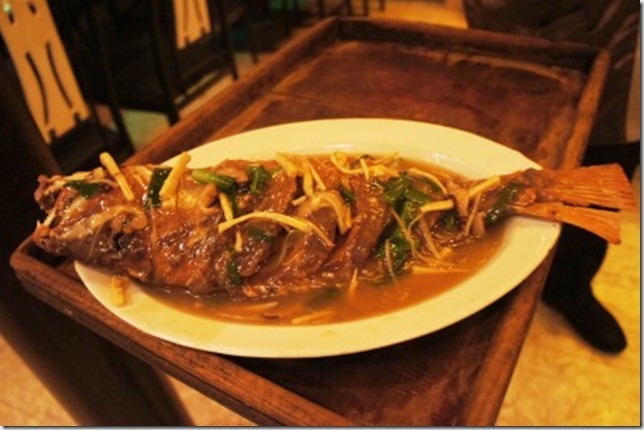 And for those who wonder how I don’t explode after all this food, taking photographs when the food arrives cuts down on your eating time you see.

Goopy Bagha at Ling’s as Soumik puts it. Photo by Gaurav Sharma 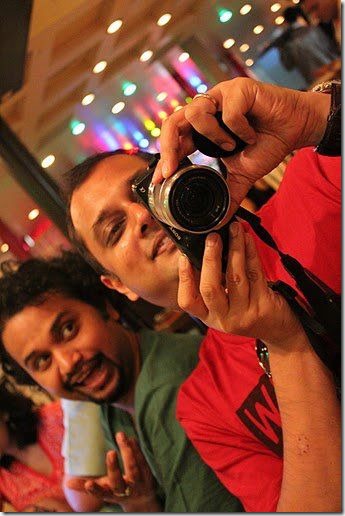 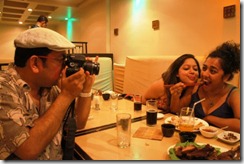 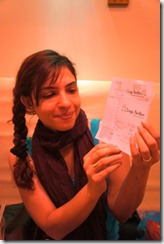 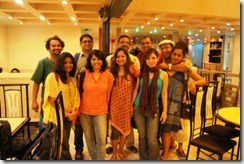 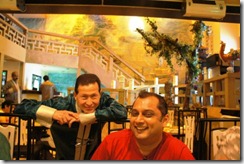 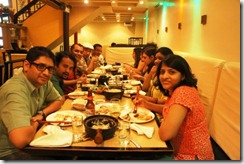 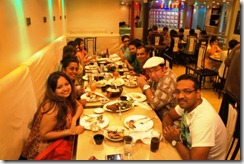 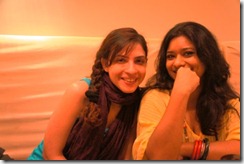 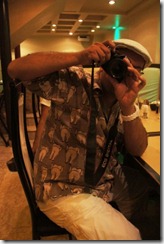 By the way, was in the press today, Hindustan Times Mumbai edition 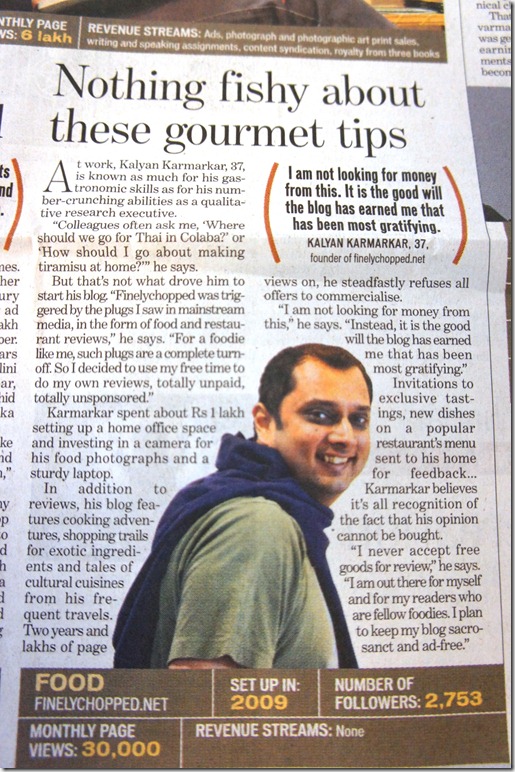 Thanks Sudeshna and Kalyan

Scarlett said…
"Kalyan Karmakar is known as much for his gastronomic skills as his number crunching abilities as a qualitative researcher". Know what I mean? ;)
19 September 2011 at 08:52

missydee said…
The pictures take me back to one of my favorite places in Bombay! Good stuff with the newspaper article and all!
19 September 2011 at 09:23

Gobri said…
We get this soup dimsum here (Penang) that is so big and has so much soup in it that you need to drink the soup with a straw and then eat the remains.
Nice post. Such gastronmic delights.
19 September 2011 at 13:58

Kalyan Karmakar said…
@Scarlett: Journalistic license apparently. All I can say is that I am not a 'Karmarkar' and don't know how to make tiramisu either

@Dilshad: thanks....yes definitely one of my favplaces in town too

Gaurav said…
Havent been to Lings in ages.. the last time i was there was a while ago and didnt really enjoy it.

Chinese messes up my stomach a great deal so i dabble a lot less than i used to. When i do go its China Garden or Oriental Blossom.

my rakhi sisters who are parsi go there when they are in the country. They should be in town soon, perhaps ill take em.
19 September 2011 at 22:46

Aar Bee said…
It is unfair to post such mothwatering pictures that force me to cheat on my diet all the time! Not fair at all. Thanks to your pictures, I had to give my daal-bhaat a miss and bullied the husband into taking me out for a all-emcompassing Chinese dinner.
;-)
Needless to say, great post!
20 September 2011 at 12:08