I had called for some chicken drumsticks for dinner. The plan was to grill them when I returned in keeping with my new grilling frenzy.

Except I had a headache which struck me somewhere in the middle of the day at work and, like a guest who overstayed, just would not leave. As I headed home early, no pun intended, it was obvious that a bit of carbo-TLC is just what the doctor ordered.

I picked up the phone as the car headed back and I dialled a number I hadn’t in a while.

“Can you send me one to Bandra please?”

“Great. Give me the labra and alu jhinge posto and skip the poneer please”.

“By the way, by what time do I need to call you to get a delivery in the evening”

It was almost three years since I had last called Pratap Caterers before this.

Labra, alu posto jhinge, chholar daal, rice, 4 rotis this evening. On other days there would be fish, chicken or an egg curry too. Was enough for both of us with some of the paneer (not poneer) Banu made tonight. 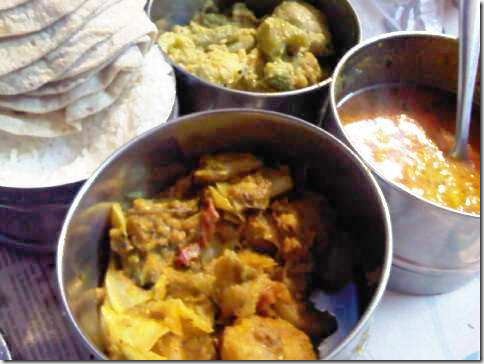 The guy who came to deliver the dabba wore a grey uniform with Pratap Caterers proudly written on his chest pocket.

This was new too.

The rest was the same since I first came across Pratap Caterers at a friend’s wedding and found out that they delivered packed Bengali meals or dabbas. Specially to Bandra W at Mumbai close to their kitchen at Gazdar Bandh.

There was a time when we could call for their dabbas pretty often. Occasionally ordered for dinners at home when we had guests. This was before I began to cook for large groups and didn’t inflict Pratap’s special (read super oily) Bengali food on guests any more.

The dabba food this evening was the same as before. Middle of the road Bengali cooking. Slightly heavy on oil. Though nowhere as heavy as that in their ‘special food’. Just the amount of oil which was used in most Bengali houses till the anti-oil health mafia took over our kitchens.

The food is that of the Ghoti style. From West Bengal. On the sweeter side versus the spicier food of the Bangals, originally from the East of Bengal. Though honestly when you are in a faraway land  you forget your clannish loyalties, if any, and revel in the fact that the food is indisputably Bengali at least. And Bengali food is tough to get outside of Bengal.

Thanks to the largely non-entrepreneurial nature of us Bengalis, one of India’s most sublime cuisines is largely hidden to rest of the world to whom ‘Indian’ means ‘curry’, ‘spicy’ and ‘chicken teeeka maasala’.

Pratap, who I recently found out, started off as a humble cook in Bengali households of Bandra, has now, with his catering company, taken a few steps towards feeding home-sick Bengalis of Mumbai. With a business-like spirit which is definitely more that of his adopted city of Mumbai, and not of surly Kolkata. He even delivers lunches if you call him by 9 am in the morning and dinners by 5 pm in the evening. At Bandra W at least.

Pratap is definitely not for the Epicurean.

But if you are a Bengali at Mumbai and and want a bit of mommying then Pratap is the man to call.

Fixed my headache too.

Pratap Caterer’s phone  number is 26007882. He is based at Santa Cruz. Delivers within Bandra to Santa Cruz for sure. And with, a delivery charge, party orders across Mumbai. Not sure about dabbas elsewhere.

Pinku said…
could you ask Pratap to open a Delhi division preferably in my locality?

Kalyan Karmakar said…
and then suhel seth was wondering what it would take to get a sweet bengal at gurgaon at the other end pinku
11 November 2011 at 13:06

Kalyan Karmakar said…
at nowhere girl I suspect they would...specially in the west...buzz them
11 November 2011 at 17:24

devina said…
Hello, your blog is a treat to read, especially for foodies for me! i make sure to stop by at least once a week to check new posts. I am going to calcutta on work and wanted some eating recommendations for bengali food. From your blog, I noted the names of the dessert/mithai and the calcutta rolls shops. was looking for places for sit down meals- with all the traditional specialities like malai chingri and kosha mangsho and the fish items- in the same vein of Oh calcutta or bijoli grill in mumbai. Thank you !!
22 November 2011 at 01:24

sash444 said…
Hi!
I second the post above; am currently in kolkatta on a work assignment for 2 mths and would love to know what your recommendations for restaurants are; esp for regional food.Do share please!
24 November 2011 at 14:12

Well Sash and Devina, the fact is when I am at Calcutta I eat Bengali food cooked by mom, granny and aunt. Went to Kewpies years back. Liked it, And more than a decade back to a place called Suruchi which is run by a woman's organisation. The other, comparatively new Bengali places at Cal, which I have not been to are Oh Calcutta, 6 Ballygunge Place, Bhojohori Manna.

Arundhuti said…
Your post reminded me of 'Dui Buri'r Henshel' - the dabba service in salt lake, Calcutta. We used to order pretty often from here just after my marriage, when cooking and I looked at different directions. I still order from here sometimes. Thier 'khashir mangsher jhol' is something to die for.
15 March 2012 at 18:54

Kalyan Karmakar said…
wish there was a service like this where my mom lives at South Cal Arundhati...would've been such a help...they did have a few there but not consistent from what i understand
15 March 2012 at 20:13

Unknown said…
hmmm..... Wish there was a Pratap caterer or similar like -here in Blighty !! I am sure the likes of Pratap or similar would be a huge success . I am even willing to invest and do the marketing bit !!