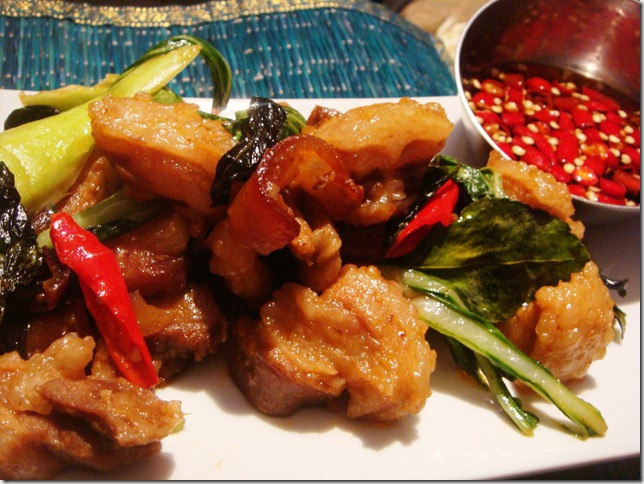 This post is about the joy of cooking something where you have no idea how it would turn out. And then realising that you needn't have worried.

What adds to the fun is if you have some of your best friends to be your guinea pigs for this. You can’t afford to get it wrong then. That would be bad Karma.

So I was really pleased when I cooked what turned out to be one of my best pork dishes so far, the other night.

A Thai styled stir fried pork belly. “Styled” as in using typical Thai ingredients – Sriracha & fish sauces, basil & kafir lime leaves, bird’s eye chillies - in a manner which is my own and cannot be blamed on a Thai grandma.

I think am slowly getting to know pork better. A mercurial meat to cook. Purrs like a tame lion as you get to know it.

The inspiration for this dish came when Chef Kunal whom I met at Melbourne left a comment on my Sichuan pork post. This is what he said.

Next time try using pork belly,should give you an even better result.The fat will keep it moist and enhance the flavour, and the skin if roasted first and then sliced and stir fried will give you a nice yummy crackling. A bit of this stir fried with mundane greens like spinach,bok choy or green beans will take the dish to the next level...

Earlier Chef Vishal from Sydney tweeted to me about making the dish with belly and they both got me thinking.

I buzzed Jatin at Meghna Agra on Friday to book pork belly for Saturday. It’s not that readily available even at Bandra. Turns out belly is cheaper than loins. Rs 300 versus 500 of the loins. The latter of course is undiluted meat.

I called up Jatin on Saturday morning and he said “Sir aapka belly ready hain”. (your belly is ready!)

I dropped in at the shop at Pali Market and there was Jatin in the middle of customer calls. Hands on as always which makes me prefer his shop.

We discussed my plans to cook the meat and Jatin strongly suggested cooking the belly a bit before stir frying it. Takes more time to cook than loins according to him. I was already playing around with the idea of roasting the meat first and the talk with Jatin strengthened my plans.

Meanwhile one of his boys peeled the skin and cubed the meat to my specs and then stopped and said:

“Aap toh photo khichenge” (you will take photos of course) 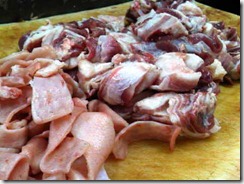 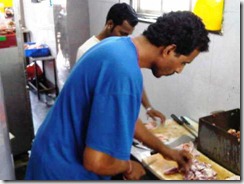 Though later, as I photographed the finished dish I realised how much I missed my Sony Nex 3. Using the point and shoot Cyber Shot makes me feel like Bachchan’s character in Silsila when he had to marry someone else instead of his beau.

I got back home from Meghna and saw that there was another blog comment from Kunal.

Oh even I cant wait to come down to Mumbai,I guess that will be possible only next year...for a crispier skin, the pork belly is usually rubbed with salt which draws all the moisture out and then you start roasting at a high temperature i.e.220 degrees and then drop it down to 180degrees and cook till it is golden brown and crispy

Which left me perplexed and I tried to reach him by commenting back:

Kunal, just saw ur blog comment...are you suggesting roasting the belly instead of stir frying...220 for how long and 180 for how long....just marinated a kilo of belly...got bok choy too

But I had lost Kunal for the moment and was left to fend for myself.

The plan I came up with was to marinate the meat, roast it for half an hour and then stir fry in basil (an I idea I got as I remembered the belly at Spice I Am at Sydney) and kafir lime leaves, bird’s eye chillies. Stuff I picked at Lallu’s at Pali Market. Finish it with bok choy.

By the time I grilled the meat I knew I was on the right track. The meat had roasted satisfactorily. The last bit of cooking on the wok took it across the finishing line.

The proof that the result was good was when my friends streamed in, saw the pork, couldn’t resist a bite. And then followed it up with anymore.

As I ate the pork later at night with steamed rice and name prick la (chopped chillies in fish sauce) I knew that it was one of my most satisfying pork dishes so far.

And, as people left, Australia woke up and Kunal’s answer came in.

We had been thinking on the same lines apparently.

And this is the recipe based on a Bengali’s interpretation of the Thai cooking tradition: 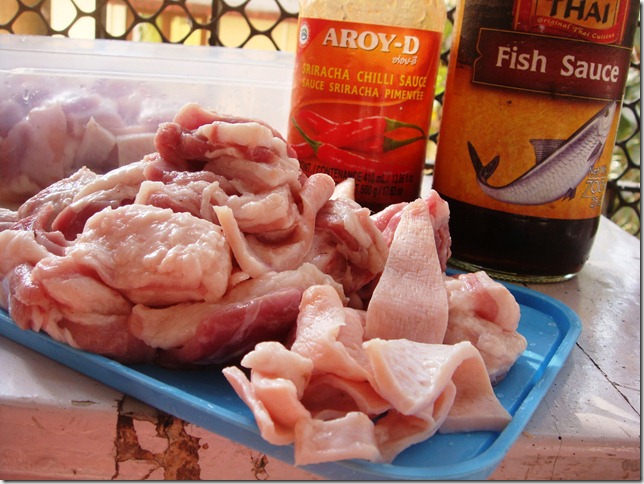 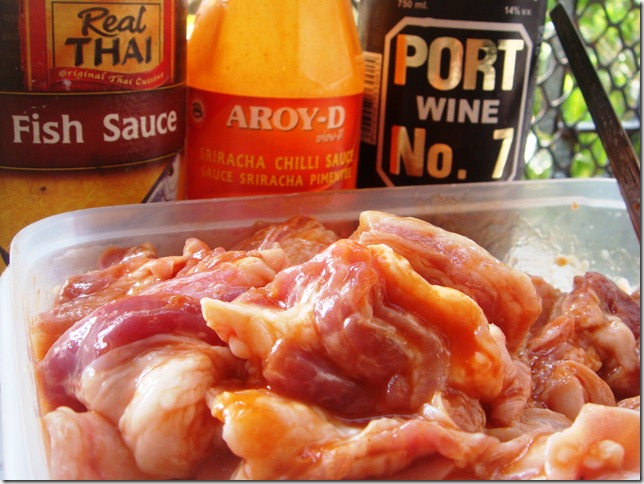 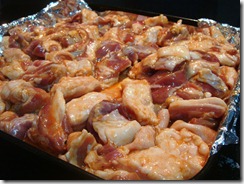 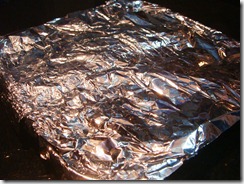 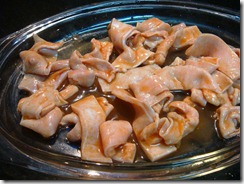 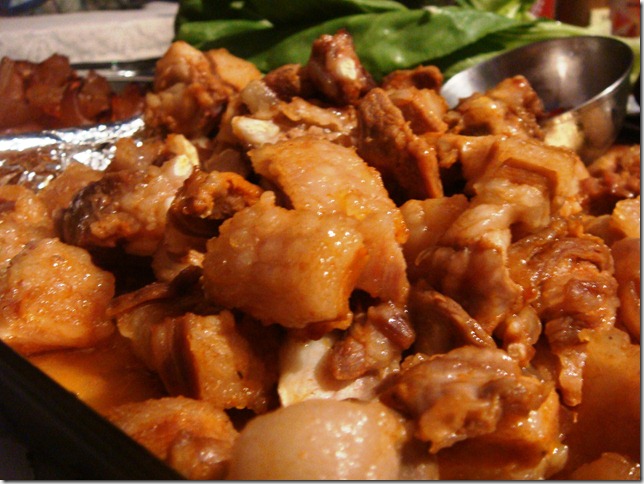 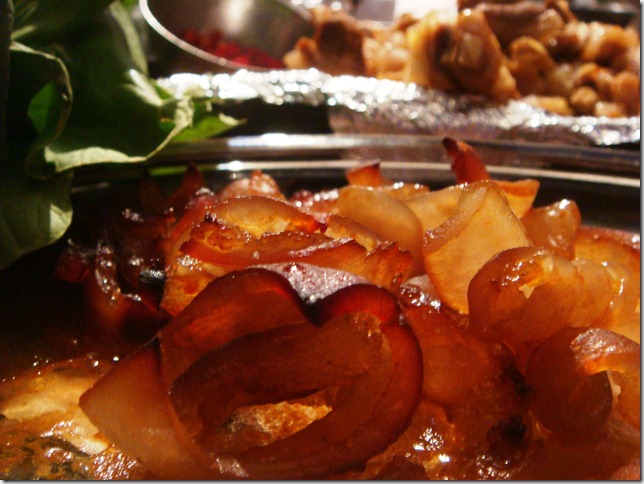 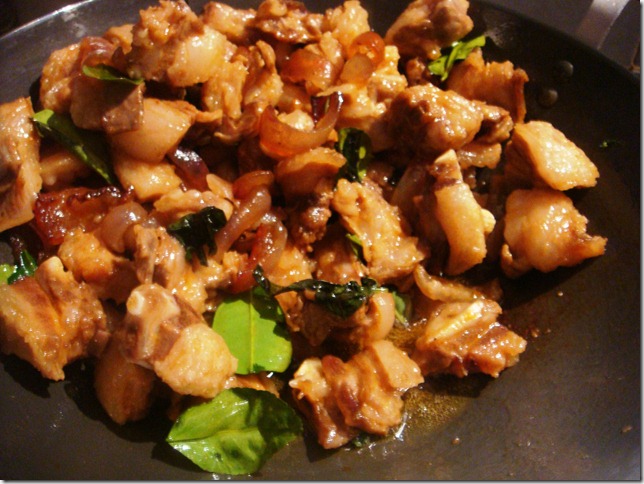 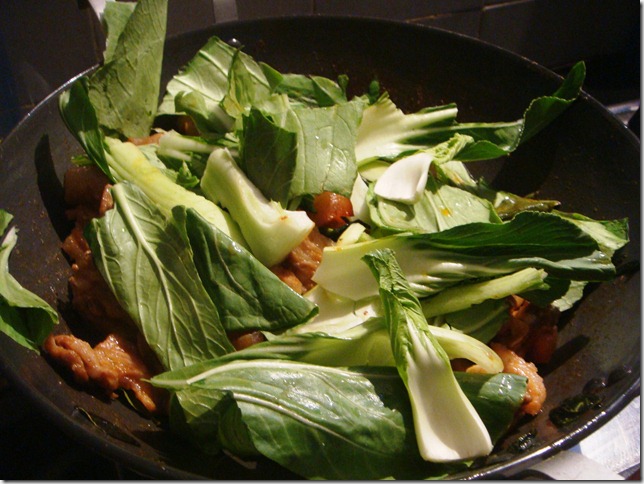 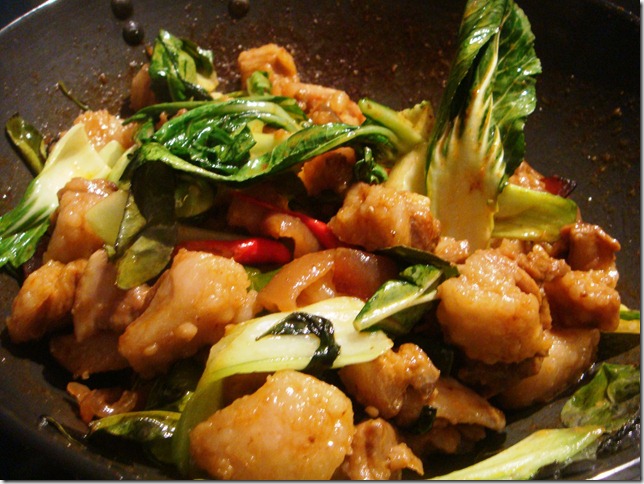 Eat this with plain steamed rice and red chillies chopped in fish sauce.

A dish that left me a happy man.

The path to salvation. 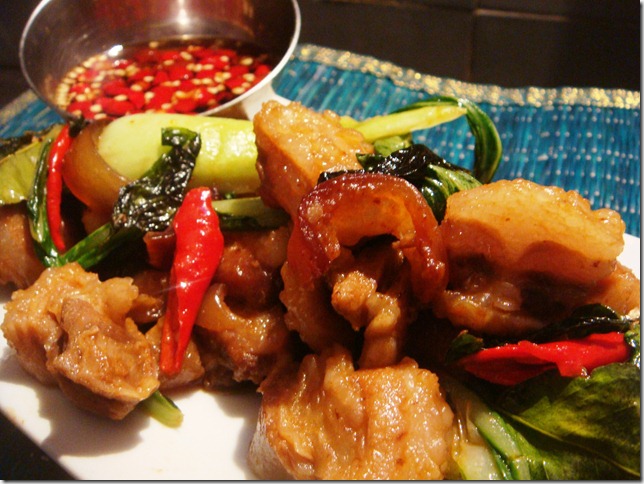 Here are some tweets on pork and me:

@Mittermaniac Sohini @Finelychopped Someone rightly said that your love story with pork will surely be made into a film, one day!

@Mittermaniac @Finelychopped Of course! The one, the only, YOU shall be the real star of the film. PORK will be supporting cast!

@vicramb Vikram Bondal @Finelychopped Someday a book on you and your love affair with Pork must be written!

And a tweet after the dinner which really warmed my heart:

@bangdu soumik sen Happilyy drunk but not enuf to stop me from soaking in the succulent pork belly, shrimp hakka and kebabs at @Finelychopped . Take a bow.

Talking of dinner, was quoted here on HT Mumbai’s article on breakfasts at Mumbai on 13th November 2011, pg 11 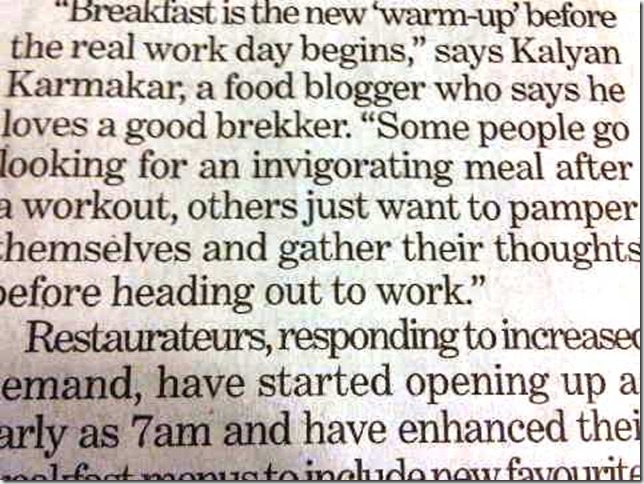 Kunal said…
Looks deliciously yummy...the pork seems to be of really good quality, I remember back in those days it was a struggle to come across decent pork in mumbai...I guess things have changed for good.
15 November 2011 at 03:27

Miri said…
Looks like you cracked it! And your crackling looks yummy! I can say that confidently after watching so many pork dishes in master chef!
15 November 2011 at 06:30

Pinku said…
this is soooo very yummy to look at.

Anonymous said…
Oh my... excellento! Crackling skin ..just heaven!
But your wok is even better. Pray tell where you got it from. Thank you AD
17 November 2011 at 13:58

Kalyan Karmakar said…
@Kunal, I get some pretty good pork at Bandra

@Pinku: thanks to facebook I am facing the same plight