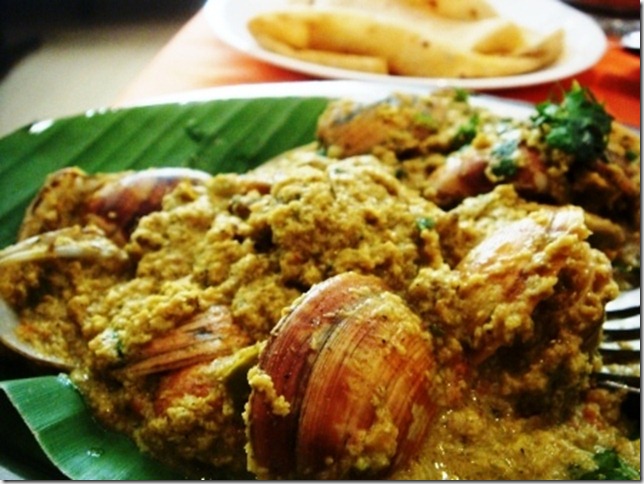 “Your feelings about Gajalee are well documented. But let’s try the Gajalee  at Vile Parle. They have a kheema (mince) which is not bad on Fridays. Plus there is nothing else around”.

I had heard of the legend of Gajalee, the sea food place, at Vile Parle east when I was fresh off the boat at Mumbai. More than a decade and a half back. Never ended up going there though specially with Saayba next door.

I got my first taste of Gajalee when it opened a branch at Phoenix Mills in Central Mumbai. I went there a couple of times and just couldn’t understand what the fuss was about. Gajalee was covered in every TV food show on Mumbai. And yet it was so pedestrian. I could feel the ghost of Sol Curry, the honest and warm Malvani fish place which was at Phoenix Mills in the mid 90s, turn in its grave.

I knew I had not been to the original branch of Gajalee. That I had not ordered the ‘right thing’. Intriguingly the very expensive tandoori (isn’t that Punjabi and not Malvani) crab apparently. Still I was underwhelmed.

So I stayed away from Gajalee. Till I went there with Dhunji. This time to the original branch with a man who knows his food.

Sample some of our lunch conversation that day:

“You should not have the curry in a Malvani restaurant. They don’t know what quantity to make. The eff up is they keep boiling it and the consistency breaks.'”

“Gajalee is where the flat Bombay Duck fry was invented”.

“We will skip the masala clams. The masala is so strong we can’t make out the clams”.

“They have this special kheema on Fridays. It is hand minced meat. People from Colaba drive down for it”

“Tandoori crabs? Well the thing is crabs need to be juicy. The task of the tandoor is to dry up things. That’s where the eff up is”. (Since then I’ve been assured by the rather persistent tandoori lobster fan that the lobsters are juicy And while called tandoori, the masla is local Konkani.)

Well Dhunji obviously knew his food and I put myself in his hands for our order We sat in the aircon section which, as Dhunji explained, doesn’t have the rice plate.

The place was buzzing. Bright and airy. No frills. Even the board outside was barely visible. A quiet pat on the back through its list of branches…Juhu, MIDC, Lower Parel, whoa Orchard Road Singapore. The waiter friendly and smiling, wearing badges which said “tell me if I am not smiling”.

We started with a nice pungent sol kadi. I asked for more of this drink which I just can’t get enough of. 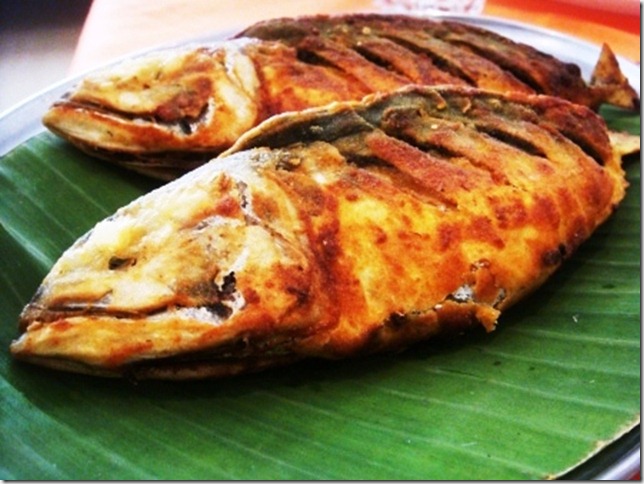 Then the stuffed bangda suggested by the head waiter. My first taste of mackerel. I had found out early in life that ‘stuffed’ in local Gomantak restaurants means ‘stuffed with masala’.

The stuffed bangda at Gajali was operatic. The fish was fried crisp. It was all juicy and crackle till you had a bite with the fantastic chutney stuffing. A home made yellow ochre chutney made with ground ginger, garlic, onion, chillies, coriander and spices. The sort a fine dining place would call a ‘house blend’…here described rather blandly by the waiter.

The chutney oozed with spunk and vitality which just brought alive the fried fish. The texture aristocratic, the taste subtle and anything but hot and overpowering. This was haute cuisine in a very humble setting. 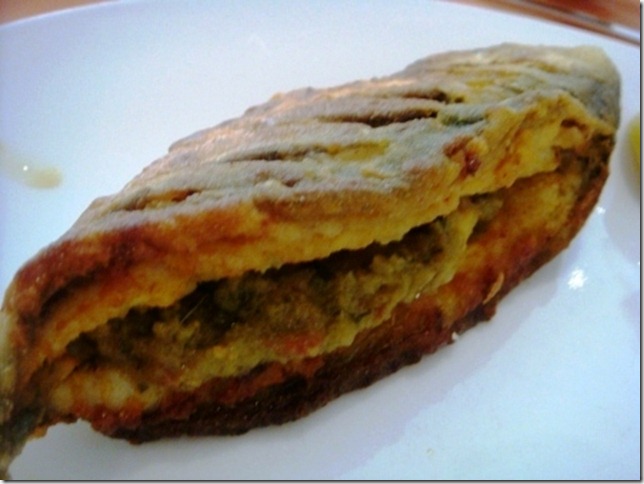 Next came the koshambi teeseriya (clams) that Dhunji chose over the masala clams which he said would be overpowered in spices.

A perfect choice as the silken ground coconut based dry yellow paste was the perfect foil for the clams. You revelled in the freshness of the clams and appreciated the distinct touch that the spice mix got in. Again the sort of delicacy and finesse which is far from what I would expect from a Gomantak restaurant. 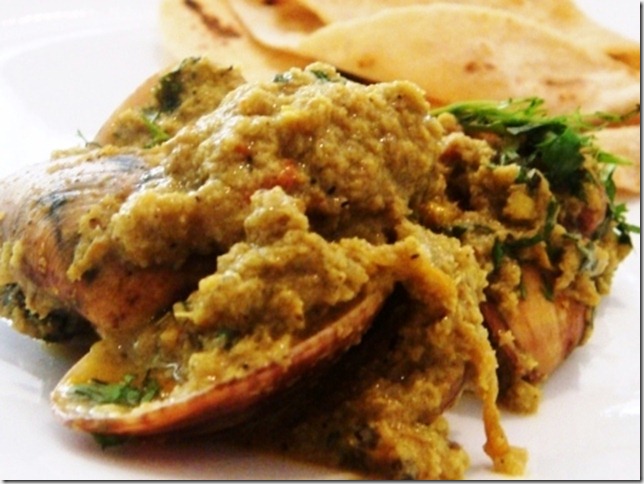 We mopped this up up with soft warm ghee soaked chappatis.

I looked sceptically at the bowl of kheema on the table. Brown in colour I felt that it would be too primordial and base after celestial virgin clams. Dhunji had suggested eating the clams fist and then the kheema. Suddenly I began doubting the man. How could you have something that looked so coarse after something so purebred?

I gingerly took a bite of the kheema keeping my reservations to myself.

I broke into a big smile.

“This is really good. I love the texture and the spring of the meat. And it has such a creamy feel to it. I thought it was going to be very heavy but this is truly artistic”

“Yes, you get this only on Fridays” Dunji explained, “it’s hand ground hence the nice bite. Even I have noticed the creaminess but not been able to crack it. I just love it. We used to come from Colaba for it”.

I asked for more chappatis mopping up every bit of the kheema. Occasionally punctuating it with an electrifying bite of green chilli. 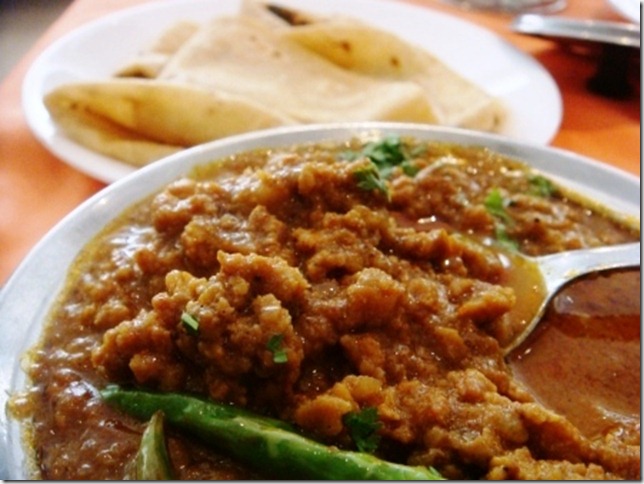 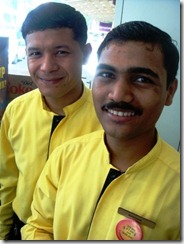 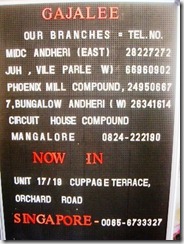 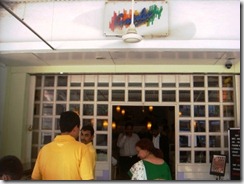 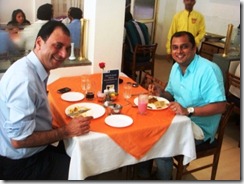 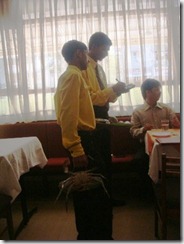 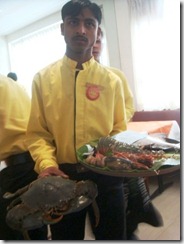 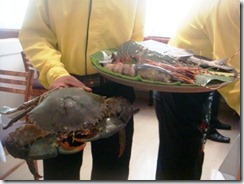 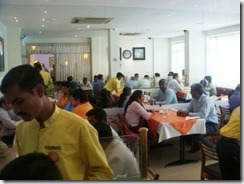 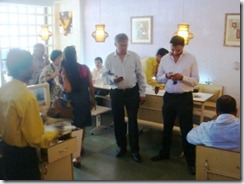 Sandeep said…
Staying very close to this Gajalee branch and practically living off it for the past many years, I used to wonder how you could call Brand Gajalee overhyped. Glad you came to the original one. (You should try their Mutton Dum Biryani, though obviously its not Malvani)
20 November 2011 at 02:03

~j~ said…
One of my favourite places that I've come to love in the last 5 years. After our late nights at work, we'd rush to Gajalee (sometimes being the last customers) for our fix of bombil fry with the soft and thin chapattis. Nothing more needed. Warm memories associated with it. :)
20 November 2011 at 11:25

missydee said…
Stuff of my food dreams - the bangda and the bombil at the vile parle branch. And their sol kadi. Oh so good!
21 November 2011 at 12:15

Miri said…
Vile Parle is way way better than Phoenix - and we always order the koshambi tisrya there....surprise about the keema though!
24 November 2011 at 20:22

crypticrow said…
Absolutely agree with this line - "You should not have the curry in a Malvani restaurant." Of all the Malvani/Gomantak eateries i must have visited in the city, none could match the taste or consistency of the fish curry my mom, aunts or I myself make. Being a Malvani myself, I absolutely refuse to order the Malvani fish curry when eating out! :)
3 December 2011 at 18:40