For the love of chocolate… Chocolate Walnut Fudge at Cooper’s, Lonavla 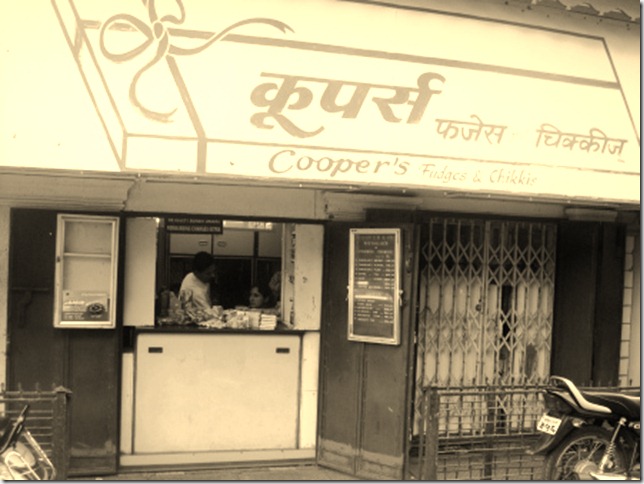 If you are lucky then the Parsis would have let you in on the real secret of Lonavla. The place they all head for the moment they land there. Not the Bushy dam. Definitely not the million shops, with boards that scream out ‘Magganlal Chikkis’, on the main road at Lonavla… but a treasure trove called Cooper’s  and its chocolate walnut fudge 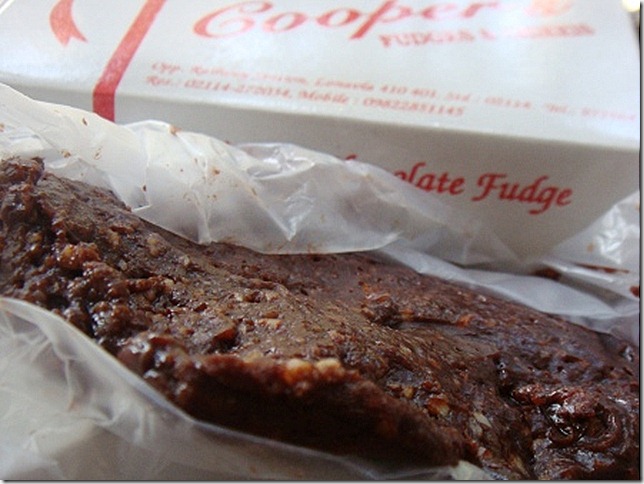 You have to get off the main road and head to the Lonavla market which is beside the station to find Cooper’s. A market, which I am told, looks exactly the same as it did decades back. Lonavla, the rather ambitiously dubbed ‘hill station, next to Mumbai, has become more crowded over the years. The Maganlals have multiplied. Smokin Joes and Baskin Robins have entered Lonavla. There’s a Lonavla square now where Ronald McDonalds has set up base. Not stuff I remembered from my last trip to Lonavla. 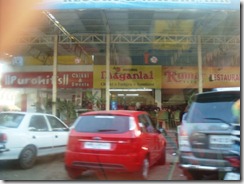 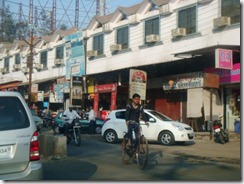 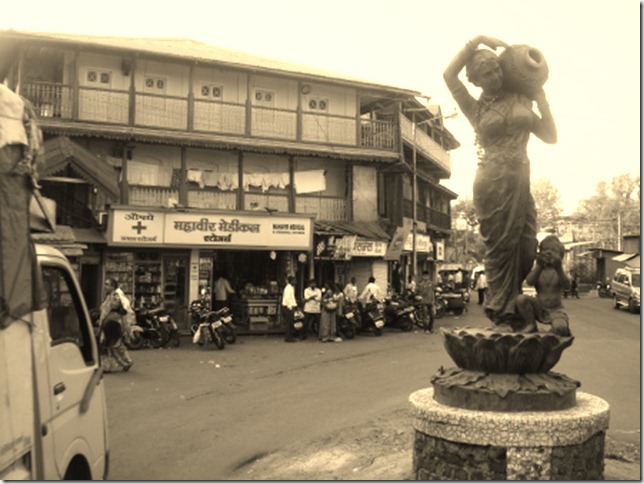 Yet, if you do down a bit from the main road then you are at the original ‘market’ of Lonavla. A place still frozen in time with the local constabulary chasing off cars which try to park there.

Towards the beginning of the market, just ahead of the circle, is a tiny shop.

A shop that yesterday looked exactly the same as it did when I first went there over a decade back. Just as it did, I suspect, about seventy five odd years back when the late Hoshi Irani set up the shop. 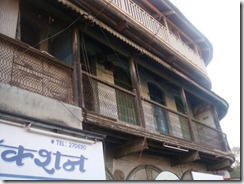 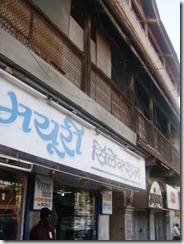 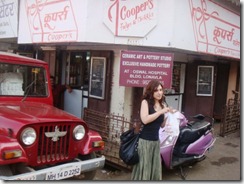 This time I met Rashna Irani at the shop. Third generation owner of Cooper’s. Hoshi Iran’s granddaughter. She had a slightly melancholy look on her face as she doled out fudge to us and the number of Parsi customers who revved up on their motorbikes.

Her father, Homi Irani, son of the founder Rusi Irani, had just passed away a couple of days back. Cooper’s was shut for a few days and they had just opened for business again the day we landed there. Her father’s memory honoured and sweetened by the fudge the fans of Cooper’s so loved and had queued up for that evening. 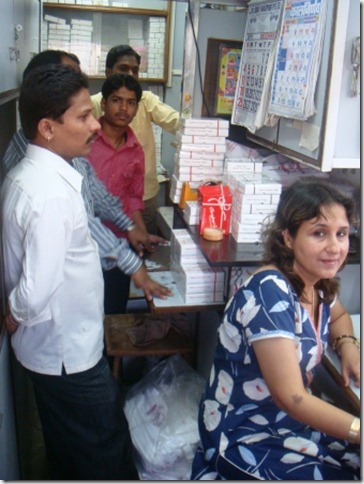 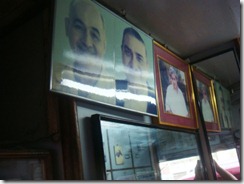 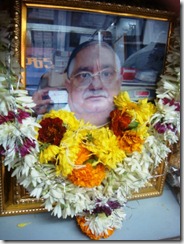 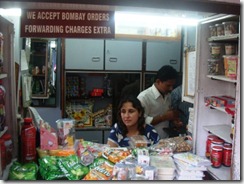 It’s not just the appearance of the shop that has remained the same.

As I bit in to some fresh warm chocolate walnut fudge I was taken back to that day, a decade back, when I first tasted the fudge here. Sweet, chocolaty, walnutty, cuddly, lovable, huggable simple, uncomplicated, something you could spend hours with in a happy place…you have seen the look on Winnie the Pooh’s face with a pot of ‘hunny’? … Yes, that just about describes the look on the face of anyone with a box of Cooper’s Walnut fudge. 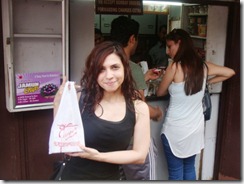 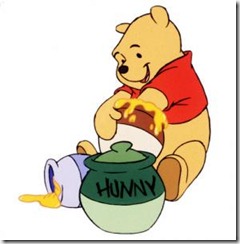 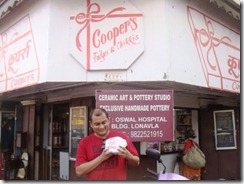 Rashna kindly allowed me to go inside the shop to take a look at a fresh pot of fudge. From what I gathered from her, the walnut fudge is made with a mix of crushed walnuts, cocoa powder, drinking chocolate, ghee, possibly milk and sugar…slow cooked…put into a vessel and then taken out and put into the paper boxes….which look the same as they did ten years back. 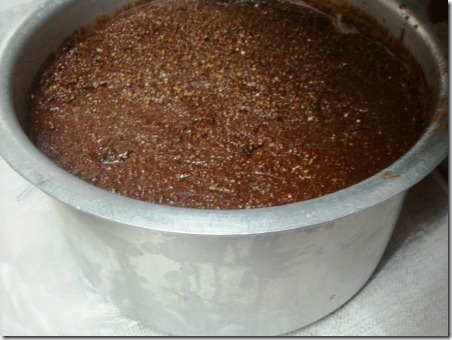 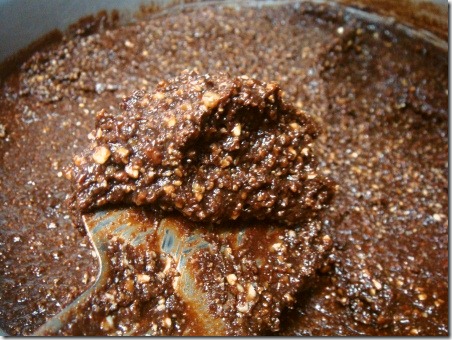 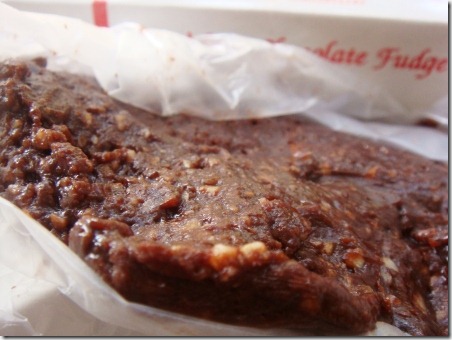 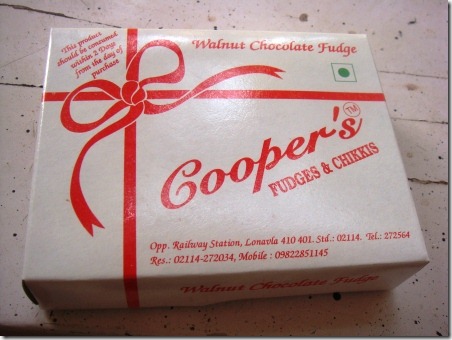 The consistency is amazing. Cooper’s might shut between 1- 3 pm everyday. And, after opening again, once stocks run out. Everything is sold fresh here after all. But for all its whimsicalness, the taste of the walnut fudge at Cooper’s yesterday was the same as it was ten years back…same as it was all the times in between when we stopped at Lonavla for office off-sites…trips during which colleagues I recommended it to became Cooper’s fudge loyalists just as I had once become.

Cooper’s makes chikkis too and other fudges, sweets, but I’d recommend the chocolate walnut fudge any day, A lesson I learnt from Kainaz, a Cooper’s walnut fudge loyalist from adolescence.

Cooper’s is not the only place that sells fudge at Lonavla. Every shop at Lonavla does. The fudge at Cooper’s is probably more expensive than those in the fancier shops.

Yet, if were to you ask me, then the chocolate walnut fudge at Cooper’s is THE single biggest reason to visit Lonavla. 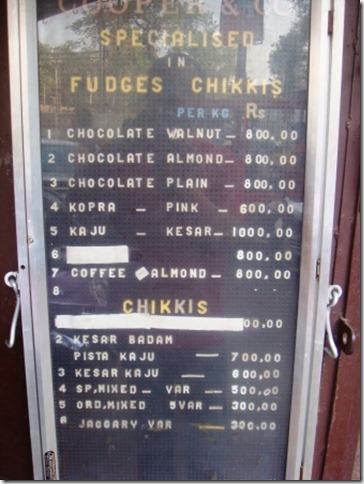 missydee said…
You make me cry. And salivate.
I remember the times I have dragged friends into the old market area and made them wait till I got boxes and boxes of fudge for myself and every other bawa friend/relative who knew I was in Lonavala.

Preeti said…
Kalyan,how I wish you had posted this in the month of August:(...anyways loved virtual trip to Lonavla and Cooper's.
19 December 2011 at 13:55

Gaurav said…
my family owns about 10 mins away from the market, been going to Coopers nearly all my life. Choc Walnut is something i personally cant stop eating once i start.

Kalyan Karmakar said…
@Preeti, well one more reason to go back i guess :)

@Gaurav; you are one of the chosen ones then and yes just impossible to stop once one starts isn't it?

@Amit and with the health karma you'll gain by cycling down the highway you can down extras
19 December 2011 at 14:53

Anurag Mehrotra said…
Love Coopers and had my frst taster of their elixir when I was 8. Love their Chocolate Walnut fudge, there is no substitute.
19 December 2011 at 17:46

Mahafreed Irani said…
Thank you for this post. I was craving the exact same Cooper's chocolate walnut fudge right now. My eyes are so, so happy.
17 January 2012 at 15:59

Gopinath Mavinkurve said…
High time they sell this delicacy through some retail outlet in Mumbai like Kayani Bakery does!
17 January 2012 at 16:29

Kalyan Karmakar said…
@Mahafree: thanks and you are lucky if the satisfaction of your eyes is satisfaction enough :)