The P Word... Feeding The Foodie 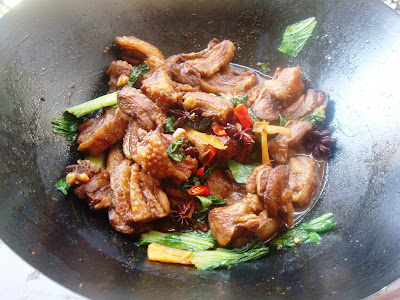 “So what have you cooked for us?”
“Hmmm er hmmm well….basically…sort of . ..er meat tossed in Asian sauces in a wok”
“Nice, I can see you have put some star anise, chilies…and some onions too”
“No, that’s crackling. It’s meat with crackling”.
Kunal Vijaykar and I had just been rapped on our knuckles for rhapsodising about pork on camera. Apparently the channel had decided not to use the words ‘pork’ and ‘alcohol’ on their food show after viewers had written in complaining about this.

Kunal looked at me wistfully and said "you are lucky, you are on the internet".
We were at the house of Rushina of A Perfect Bite. They were doing an episode on food bloggers with Rushina dishing out her story and some recipes too for the show.

She’d invited a few of us to join in. Nonchalant Gourmet Nikhil, Tongue Ticklers Harini and Saee with her ‘My Jhola’.  The three of them were sitting inside quietly like good children while I reached, rung the bell, and like the proverbial bull in the china shop walked into the drawing room as Rushina cooked prawns for Kunal in front of the camera.
Kunal was nonplussed by this as I shook his hands introduced myself and went into the ‘children’s room’.
We took out the stuff we had got for the last segment – a food blogger’s potluck Rushina invited us to – and did our own little shoot as we played Foodie Foodie while Kunal and Rushina shot outside.
I commandeered Harini, who apart from being a vegan food blogger, is a great amateur photographer too to take photos of the food. She sportingly shot the stir fried p#*$ that I made though understandably taken from a distance.
Here’s the picture she took. Straight out of a glossy mag if you asked me.

I didn’t have much faith in the food photography of the show and hence the request for the snaps. That’s one area The Foodie needs to work on to make it a really good food show.
There was some pretty great food out there. Saee had got a pavlova which looked like it belonged to a picnic table in a garden at Italy. It was all about meringue and whipped egg whites and the sort of stuff you hear about in Masterchef Australia. Tasted like it too.

Harini had got vegan desserts. Kaju barfis without milk which had us moaning in joy, the gajar ka halwa which worked well without milk as one intuitively felt it would and brownies which defied the laws of nature. Brownies that didn’t seem to have anything –  no milk, eggs or flower – but there they were on the plate.

Nikhil the gourmand came with a tom yum soup and potato gnocchi. Gnocchi has never worked for me before but this I liked and took repeated fork-fulls off…the sauce was ephemeral.

Rushina cooked some citrus chicken for telly which were braised beautifully, vodka prawns which were quite succulent and a smoked cheese infused chorizo spirelli which she dedicated to me on camera because of the chorizo. Something the world might not get to know of once the channel figures out what chorizo is. You"ll have to wait for the show to see how these looked.
I had marinated the pork belly in sriracha, soy, fish sauce & honey the previous night and the skin in salt. Roasted the two separately next morning at 200 c for 30 minutes. The skin crackled but was quite tough so I still need to work  more on cracking the crackling.

I tossed the rest of the pork in a wok, on the morning of the shoot, and stir fried it with with star anise, ginger slices and threw in some sliced red chilles and bokchoy at the end.
The flavours had come out well but I wish the meat was more tender. Saee said that not roasting it before the wok toss might have helped. I want to experiment a bit more on this before I share the recipe.
That morning I realised that Kunal is not as big as he looks on TV. “The camera adds on twenty kilos” he said as I told him about my observation. I later saw that he tasted all the dishes but didn’t finish them as I earlier thought he did. He is a man who loves to eat and talk about it.

And was sporting enough for me to cheekily tell him “I used to think that you ate up all the food they showed you with on TV”.

We chatted about food and meat as the shot got ready. He told me to try out the kheema at Grant House while I got him interested in Arsalan which has just opened at Khar. Kunal’s a Bombay Boy and predictably only likes the biryani at Jafferbhai. "There's no such thing as chicken biryani".


We both agreed that we loved Ling’s and had a similar view on a ‘Chinese’ restaurant he has reviewed on his show… ”my problem with them is that how can you be a Chinese restaurant without serving pork and beef”.
Luckily the producer didn’t hear us.
I think the episode will come out early next year.
Harini couldn't fit Kunal and me into the same frame but these were taken during our chat before the shoot:

And this is from the finely chopped facebook page later at night:

How do you describe a stir fried without using the word pork? Apparently you can't talk about pork or alcohol on food shows on Indian channels because of viewer complaints. Not that free a country eh?

The world of blogging

Nikhil Merchant said…
This is such a super round-up of the shoot ! relived it all over again :) super cool post super cool people !
24 December 2011 at 04:36

@Sassyfork...frankly I always used to like him a lot more on the week that wasn't than on the foodie... that afternoon changed that
24 December 2011 at 12:52

Anonymous said…
Wow! This sound like super fun. Can't wait to see all of you on telly. Accha, pork has been featured on Highway on My Plate quite a few times. Take a look at this http://www.youtube.com/watch?v=fX9r-U0zebc

Kalyan Karmakar said…
Thanks Swagatha...seems to be a recent dictat on The Foodie
26 December 2011 at 00:36