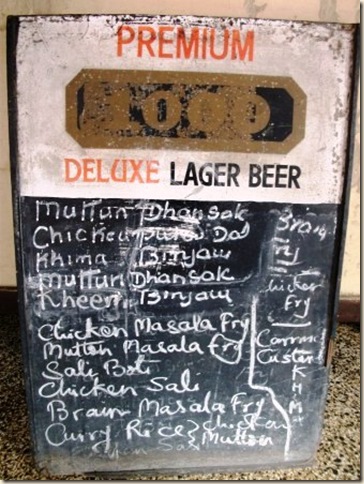 The thing about Fort is that it continues to charm one with new delights long after one has fallen in love with it. Like it did with Cafe Military Restaurant and Bar the other day.

We were headed to Fort for a meeting after a long time. Even my colleagues were excited and were making lunch plans from the day before. As we set off from office we were trying to decide between Ideal Corner for Parsi and Deluxe for Keralite when a tweet floated in.

@arichatt :@Finelychopped Have you been to Military cafe ? For me their Caramel custard scores a bit higher than ideal :-) 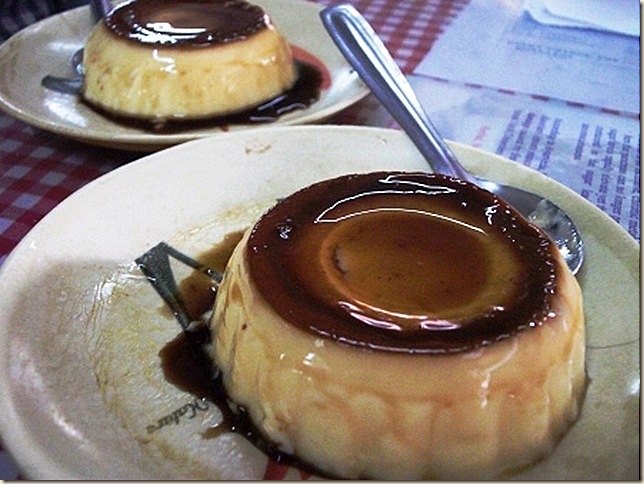 I had heard of Cafe Military, the Parsi joint, recently and a google maps search showed that it was at Fort. A quick change of plans and we decided to head to Cafe Military before our meeting. The three of us found Cafe Military rather easily once we reached Kala Ghoda. It is opposite Ankur, behind BSE, the lane opposite HSBC.

We walked in. Cafe Military had all the trappings of a traditional Irani joint. Deep, cavernous, airy, cool, dimly lit … a slight stench when we sat down which soon disappeared…possibly of the cloth used to mop our table… red chequered table cloths, wooden tables and chairs which seated hungry office goers…a content hum resonating across as people ate in studied silence…government office folks, elderly Parsi couples, lawyers in black, multinational bank employees garlanded with swipe cards, they were all there.

Unlike most other Irani places they served beer at Cafe Military…unlike the caricatured image of Irani restaurants it didn’t have a cat, or a board with stern instructions on how to behave …nor was there the archetypical grumpy Irani cafe owner … an urban legend as I have begun to believe.

The owner, Mr Behram Khoshravi ,(apologies if I got the spelling wrong), whom we met on the way out, is the opposite of grumpy. He punned on his surname (khush – happy, ravi – stay) as he introduced himself to us with a toothy grin and said that he was always happy. Happy running the restaurant his father, the late Khordad Khoshravi, started in 1933. Happy feeding people. 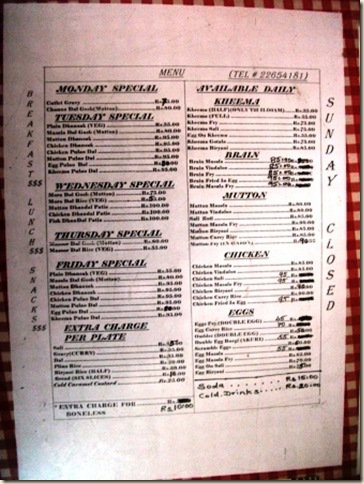 I met his equally sweet wife Shireen there. I asked her if she supervised the kitchen.

No fancy claims here. She just smiled and said that she had come to help her husband so that he didn’t get tired. “We have a cook who cooks all the food here. Moghlai (!) food”.

No pretensions of ‘my own recipes, cooked by my, shopped for by my husband’ or anything like that. There were no divas at Cafe Military. No restaurateurs or master chefs.

All Mrs Shireen had to say as she waved us goodbye was ‘khush raho’ ( be happy) as she closed her eyes in a silent blessing.

And that’s what our afternoon at Cafe Military was all about. It was all about finding happiness and feeling at home starting with Mohan, the elderly waiter who served us with a smile that reflected his boss’s toothy grin.

Sulky service at Irani Cafes? Well, Mohan Babu ran up and down getting each dish as we gave our ten minute long order. There was just so much good food around. And we were made to feel very welcome. 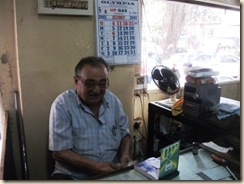 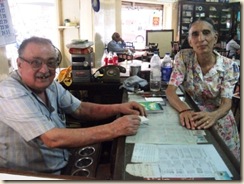 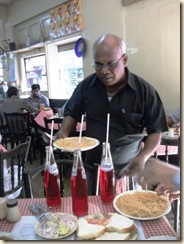 We started with the red aerated drinks so typical of a Parsi bhonu (meal). The only time in life when ‘getting a raspberry’ is a good thing. Thankfully, unlike with good old Mr Boman Kohinoor at Britannia, we didn’t have to wrestle for our raspberries here. 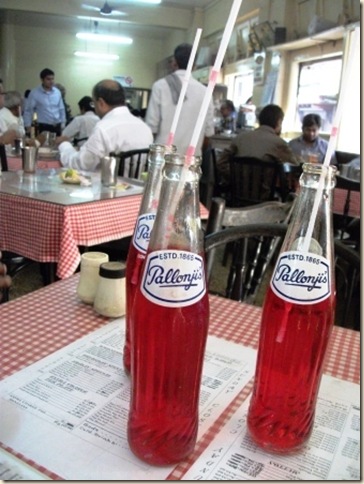 Then came the akoori. This was served with soft slices of bread which they get from Roshan Bakery at Mazgaon.

Akoori is a lesson to the rest of the world  from Parsis and Iranis on how scrambled eggs should be made. A lesson the rest of the world could do well to learn. The akoori at Cafe Military…eggs beaten to a creamy consistency, slight tart of tomatoes with the odd resounding bite of chopped green chilli which suddenly woke you up like the last percussionist hand clap at the end of a snooze inducing head massage in the barber shops of old Mumbai… this was poetry on a plate. 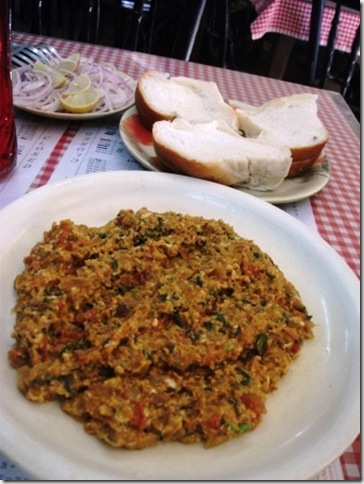 The mutton dhansak was served to us cold. It had potential. The mutton tender. The dal had a hint of the flavours of musty kitchens where Parsi families got together to eat. But you had to stretch yourself to seek these out as the cold dish didn’t really embrace you. It needed patience which the colleague who was going to share the dhansak with me didn’t have. Nothing to write home about if you ask me. 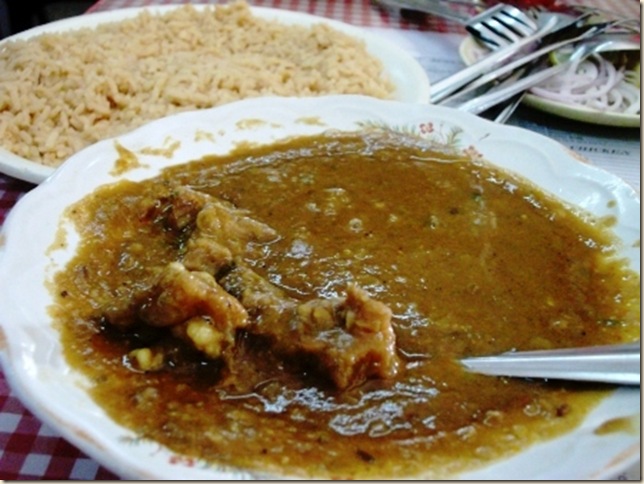 So forget the dhansak for the moment just as we did when Mohan  got us our kheema ghotala. This is the first time that we had this famous Irani restaurant dish. Kheema ghotala, which strangely enough literally means ‘minced meat scam’, was explained to us by Mohan as ‘egg and kheema’.

What we ate was probably the best dish anyone had at Mumbai that afternoon. An akoori base with a bewitching minced meat flavour and bite swirling through it…the taste…woody, robust….unapologetically meaty.

Chinmai said, the true test of a restaurant is its kheema. I agree. Most places at Mumbai disappoint when it comes to kheema, but the kheema ghotala at Cafe Military was sheer culinary wizardry. 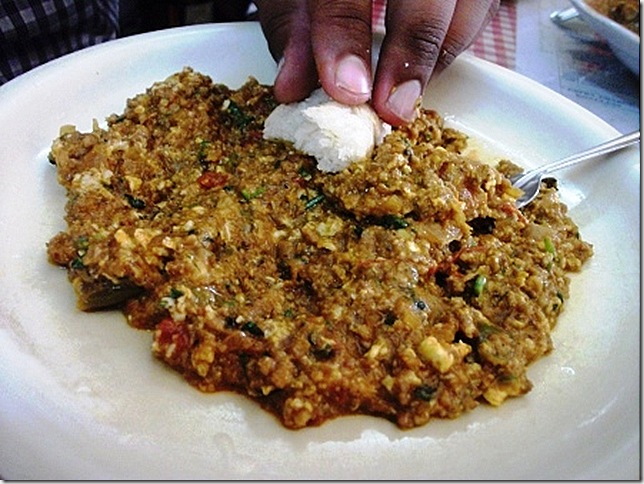 And that was not all. Turned out that the kheema ghotala was just the crescendo that rose to a climatic end with the caramel custard. One bite of the custard and we could hear the birds chirping around us,  could see the angels floating by, the flowers bursting around us in Technicolor brilliance as we bit into the sugary, cold, caramelised, milky, cuddly, lovable custard delights that the simple stained and chipped plates offered.

Deepak spoke of food orgasms in a very Masterchef USA like-lingo as we smiled blissfully through the bites of the custard…stopping only to call for seconds. 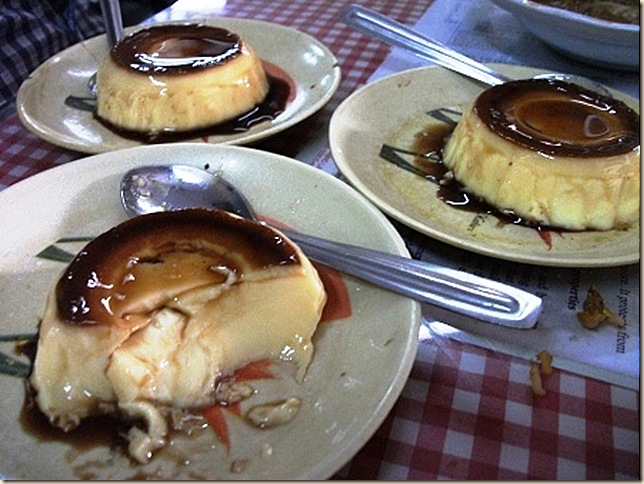 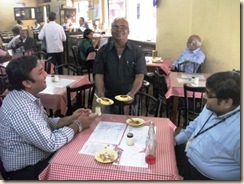 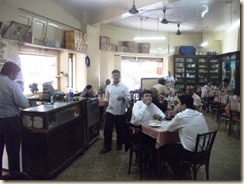 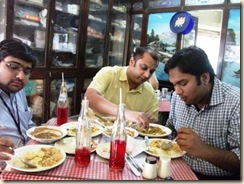 My Fort sabbatical didn’t end there. The meeting followed, and then with reinforced troops at Yazdani…Irani chai, khaari biscuits, brun maska, shrewsberries…these were hungry troopers.

At Mumbai, Bandra is home to me but there is something about Fort that holds me in its spell. That has me enchanted. A bit like a Hindi film romance.

Fort after all was my first port of call when I came to Mumbai as a summer trainee many summers back. Since then I fell in love with the sea at Marine Drive, then Colaba and eventually Bandra where I pitched my tent.

Hindi films teach us that despite the various romances since, you cannot forget your first crush. There is an inexplicable warm glow and quickening of heartbeats every time I come back to Fort. Like a Hindi film romance, or any romance for that matter, there is no logic to it.

Yet there is something in its sense of history, in its tales of times forgotten, in its thick stone walls with musty paint, in its crowded winding lanes, in its European architecture, in its delightful bites, in the smiles of its people and in the sense of happiness surrounding it, in its many quaint and honest eateries, places like Cafe Military …

There is something in it which makes me fall in love again and again with Fort. 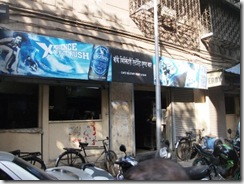 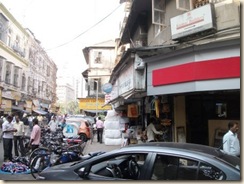 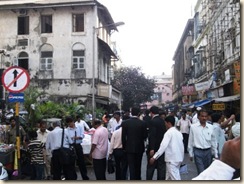 dipikasingh said…
I've never eaten at Cafe Military. but definitely headed there next week.
16 December 2011 at 15:22

Kunal said…
As usual a superb entry that brings back old memories of my homeland...the caranel custard looks amazingly mouthwatering...one more restaurant to be added in my already crowded "must visit" restaurants/cafes in mumbai...thanks Kalyan da!!!
17 December 2011 at 11:11

Miri said…
Oh the caramel custard looks heavenly!!!! And the Keenan ghotala too. My dad lives akoori and I make it for him every time he's here- just great food
Btw, have you tried miso? I just posted a miso soup I made and it was delicious. You must try it with grilled fish.....
20 December 2011 at 06:59

jerrad jonhson said…
I’ve eaten here twice, and I can’t get over their sweet Caramel Custard.