This is the first a three post series by my mother from her trip to the Orient in the late 1970s. The first deals with Thailand and will be followed by Japan and Philippines. Hope you find this interesting and would be great if you write in with your comments.

"We were in Iran when we made this trip to Thailand, Japan and Philippines. Things had started looking up and we had settled down reasonably well in Rasht, a city near the Caspian Sea in Iran.

It is not that we went to these oriental countries just to spend our holidays. It was a work-cum-pleasure trip. K’s father was nominated by the Iranian Govt. to represent Iran in a conference, named SICOT, at Kyoto in Japan.

This conference was to be held to observe the 50th anniversary of the World Orthopaedic Congress (1978).

It was a great honour for K’s dad as he was to represent Iran, in spite of being a non-Iranian. Since all his expenses were to be paid by the Iranian Govt., he thought of taking us along with him by paying only for me and K. Then, if you were going so far, why not visit a few other countries on the way? After all, we are travel – loving Bengalis!

K was at that time four and a half year old. Thankfully, we did not need to pack his nappies anymore. He was also old enough to endure frequent flights.

So we started packing our suitcases. But the problem was where to keep my ornaments, whatever little I had. It was risky to travel with those. K’s dad suggested that I should keep them with the Mayor of Rasht, Iran. The Mayor was a man of about fifty. We were quite friendly with him. In our time, ‘husband was always right.’  So I handed over all my ornaments to the Mayor with butterflies in my stomach. Anyway, to cut the story short, I got all my things back on our return to Iran. At least, in this case, the husband was right.

Our plan was to go to Calcutta (it wasn’t Kolkata back then) first and then proceed from there to Bangkok, Kyoto, Manila and finally back to Iran.

On the designated day, we took a flight from Tehran airport to Calcutta. We spent about a week with our relatives in Calcutta and had a great time. At that time, Calcutta was in a very sorry state as the whole city was being dug up for laying the tracks for Indian’s first metro/underground railways. But the Calcuttans, bore everything with great fortitude, the fruit of which is being enjoyed by the present generation of the Kolkatans.

From Calcutta, we took Thai Airways flight to reach Bangkok, the capital of Thailand. It was a beautiful city with tall buildings and magnificent Buddhist temples.

Bangkok was not as popular as a tourist centre at that time as it is now. In the ensuing years, Bangkok has evolved itself as a major tourist destination. When my sons K and Sid grew up, they both went to Bangkok. On coming back, they told me about its ‘floating market’, ‘walking street’, Sukhumvit and so on. But when we went to Bangkok, at least, I had not heard about these places. The only common things, between the two generations are the Buddhist temples.

The first and foremost among these is the temple of reclining Buddha. In local language it is called ‘Wat Pho’ temple. It is the largest Buddhist temple in Bangkok and famed for its huge and majestic reclining Buddha. It measures 46 meters in its lying position. You can well imagine how long it is.

When I went to Gurgaon last year, I was surprised to see a replica of the reclining Buddha in “The Kingdom of Dreams”, an entertainment centre, in Gurgaon. But the replica was not so huge or majestic.

You, all know, that Bangkok is now passing through its worst floods. In October, I saw a file picture of the reclining Buddha to the north of Bangkok in ‘The Telegraph’ .The lower part of the huge statue was in floodwater and the villagers were paddling past the giant statue of the reclining Buddha. This picture made me sad, as I feel all ancient temples and monuments should be preserved from natural calamities and man- made invasions for the sake of prosperity. It is a great loss to the mankind. 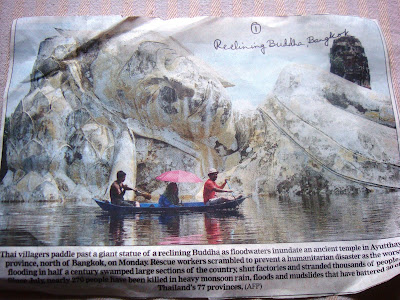 Another Buddhist temple of great fame in Bangkok is the temple of Golden Buddha or ‘Wat Traimit’ as it is called in the local language. Inside the temple, there is a 3 meter tall statue of Lord Buddha in a sitting position. It is made of solid gold and weighs 5.5 tons. I do not know if it is made of 18 k gold or 22k gold. But I still remember that the huge statue dazzled in all its beauty.

We also tasted the street food of Bangkok, which consisted mainly of noodles, being sold mostly by women.

When we went to Bangkok, the Buddhist temple and the statues of Buddha were the most important tourist attractions. But nowadays, the present generation goes to Bangkok more for fun, entertainment and buying of ‘phoren goods’ at a reasonable price than for anything else.

As our Bangkok tour was over, we left for the airport at night to reach the next destination. But as luck would have it, our flight got cancelled. We spent the whole night at the airport. Next morning, we were taken to a 5 star hotel. On the way to the hotel, I saw a scene, so beautiful, that I have not been able to forget it even after so many years. In one place, we saw a pool in which bloomed lots and lots of lotus flowers. Being brought up in Delhi, I had never seen a lotus before. I was overwhelmed to see those full grown red and white lotus flowers. The scene was so beautiful that it seems like a dream sometimes.

KL said…
You have a beautiful blog. Gosh! your blog is making my mouth watery and hungry. Please don't torture your readers so much, especially those who stay so far away :-). Calcutta's Chicken Chaap is the gateway to heaven in this universe.
28 December 2011 at 20:05

Kalyan Karmakar said…
thanks KL...loved the photos on your blog...and gateway to heaven sums it up indeed
29 December 2011 at 00:33

kaniska said…
can almost visualize the more pristine bangkok compared to what we are used to. mashima's has that innate talent of storytelling. love reading her pieces. so descriptive, so visual. and the way the photos have been preserved. mashima ke shongrami laal selam.
29 December 2011 at 13:24

first class airline tickets said…
This comment has been removed by a blog administrator.
1 February 2012 at 13:41