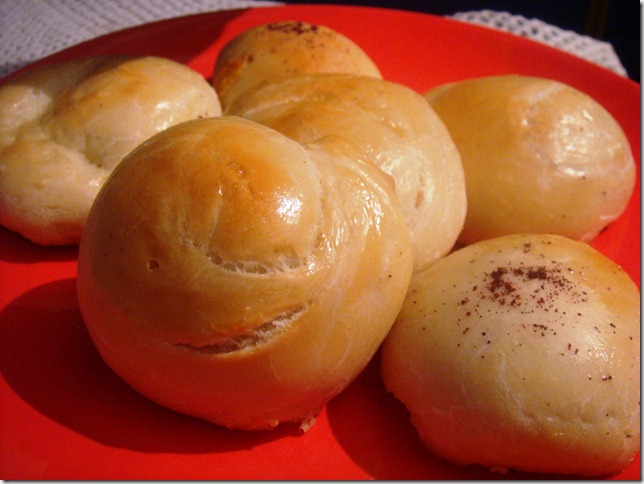 After a million months of procrastination I finally got off my butt and did it.

I found a trillion reasons not to so far. Excuses from various angles. All very logical. I turned a deaf ear to those who said I should do it. Who said I could do it. That I would love it once I did it. That it wasn’t as difficult as it seems.  Experts who were kind enough to encourage me. They even said that they were sure that I would be a natural at it to egg me on. People kept telling me to get over my misgivings and trepidations. To break away from the sense of inertia and ennui and go ahead and do something about it. To make a move.

I did take a few steps. Made the occasional preparation. Often I prepared to take a step ahead. Then went back. There were always other things to do. Reasons to put it in the back burner.

Then a new year started. A year in which I resolved to make things move.

Then things seemed the same as the new year set in and life continued. There were more important things to do. And then even making justifications seemed too much of an effort and not worth it. The old order continued.

Till today. A day when I finally shook off a sense of ennui and decided to do something about it.

All my excuses had come to nought for a while. K gave me an oven. Then I actually went to a bread baking class at Le !5 Patisserie. Broke my mental block to following recipes and baking by actually doing so in class. Then I came back home and did nothing about it. Didn’t practice what I learnt. There were always reasons.

Then one day mom suggested a bacon and sausage dinner from Kalman. I thought I’ll bake bread. Banu bunked. The kitchen was too messy. The bread plan was shelved. Then Banu came to work. The kitchen was clear.

I went to buy flour. The packs were 500 g onwards. The recipe said 225 g. The gentleman at Vijay Stores said “for measurement? No problem I’ll split the pack in to two portions.”

I headed home. Read the recipe. Got hold of everything. I started

I started kneading the dough the way we did it on class. I started to see it form in my hands. The powder began to clot and then as I continuously added water the dough started to form. I switched on the TV to Cyrus and Kunal’s The Week That Wasn’t and happily kneaded away for half an hour like a grandma knitting a jumper.

Massaging the dough. Pushing it. Pinching it. Patting it. Stretching it. 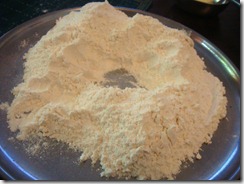 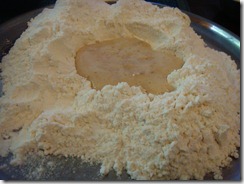 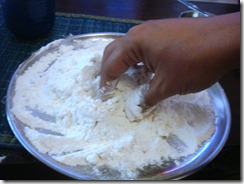 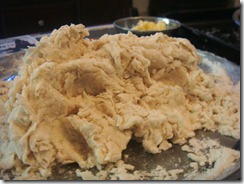 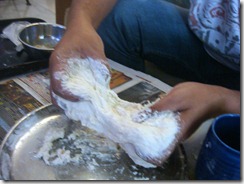 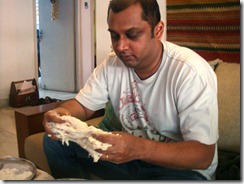 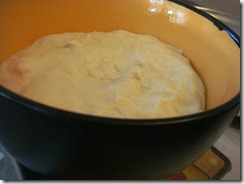 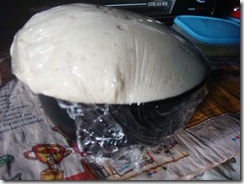 I left the dough to prove and had lunch and then went to sleep. In the evening I went to check the dough. I looked at it proudly as I saw that it had really grown. And how. It actually had begun to crawl out of the bowl. The dough had a life of its own.

I went out and bought a glaze brush. Formed little balls of dough. Some attempted snake-like strips for rolls. A few balls that I stuffed with a bit of bacon and cheese. I put the balls of dough on the tray. Tried to roll them with flour powdered hands. I glazed them with eggs. Sprinkled a bit of water on the dough.

I looked anxiously at the eight misshapen wobbly babies as I headed out for a walk.

Came back. Heated the oven. Put in the dough. Went for a shower. I came out and heard the bell of the oven. 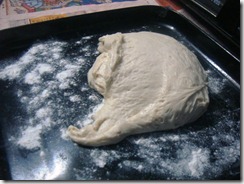 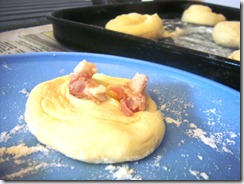 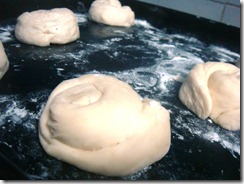 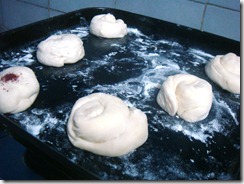 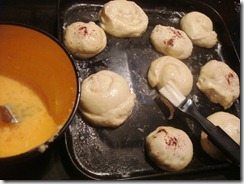 Went to the kitchen took the tray out. Eight balls. A reassuring hollow sound when I tapped them with my fingers. Looked rather pale though possibly because I used the lowest rack. 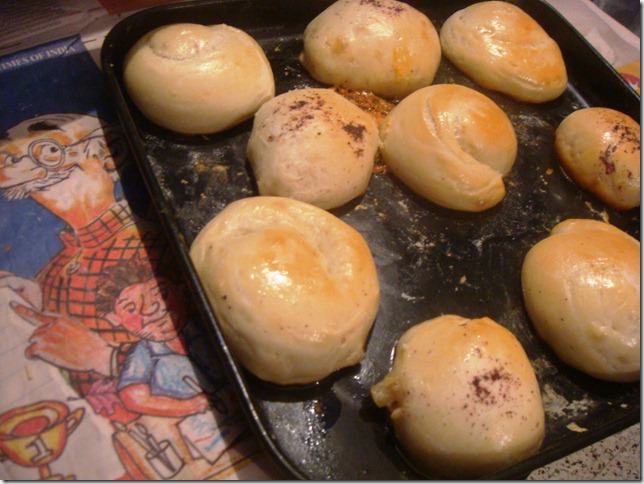 I added a bit more egg glaze and then put the tray in with the oven on a toaster mode for five minutes so that the crust of the buns could brown.

Five minutes and the breads were golden outside. Took the bread off the tray, The base of the bread looked right too. Broke a bit. The inside seemed all good. Looked fine, would it taste like bread?

Ladled out our dinner of fried bacon and potatoes and sausage that K fried onto the plates. Special mention here of the smoked bacon from Kalman. Outstanding and juicy.

Yes. This was the real deal. The shapes weren’t uniform. The results of the cheese and bacon stuffing mixed as the cheese had oozed out but good otherwise. A touch of sumac on top to mark them out.

But the bread was pretty good. Pretty satisfying at the end of the day. 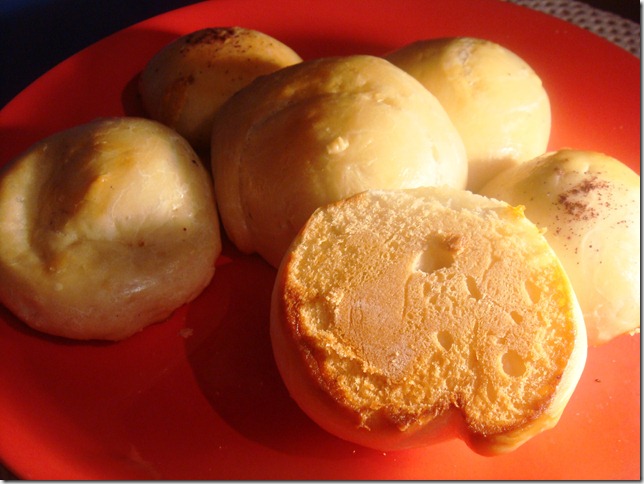 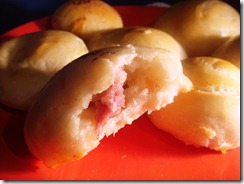 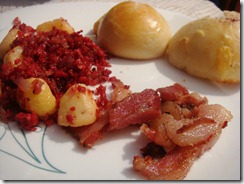 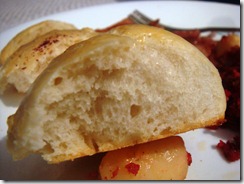 Finally a start had been made to a year in which I wanted to move out of being ‘stuck in the second gear’.

Now for the next thing in life that I wanted to tackle for a while and haven’t done anything about yet.

Note: Not giving the recipe as I followed the Le 15 recipe. This post is not about the recipe in any case. Still you will get an idea from the photo of the hand-out. Couple of things to keep in mind. Keep moistening the dough to help it form. Use wide vessels which gives the dough and then the bread space to grow. Use one of the higher racks of your oven so that you get a nice brown crust. Plus the recipe says sugar and butter. It should actually be salt. For the record, my measurements were approximate.

And also thanks to Nadia who tweets as @saffron trail for pointing out that Finely Chopped was mentioned in the Bangalore edition of DNA. Here’s the link 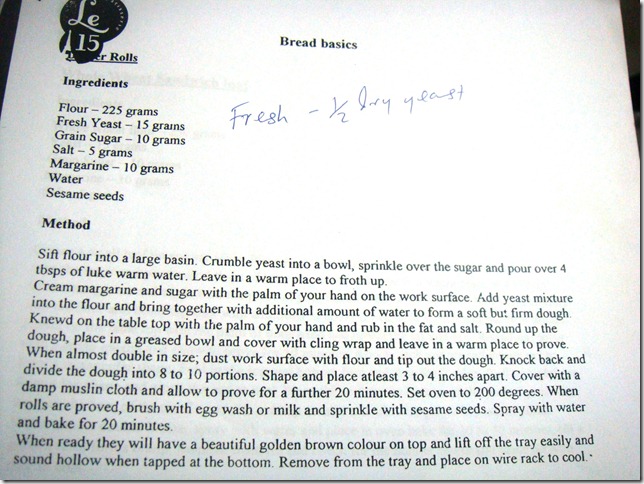 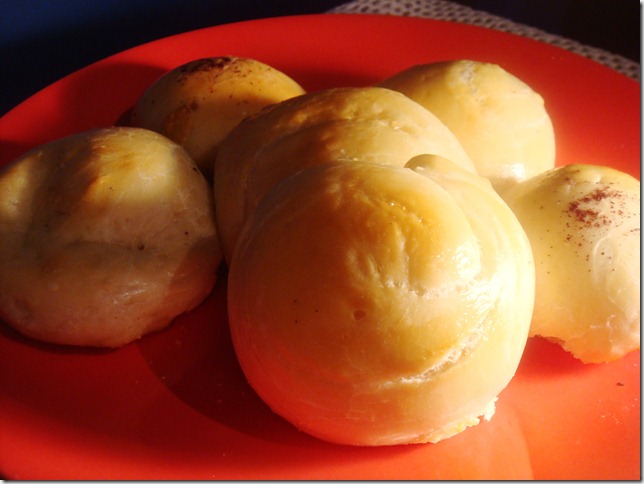 From the hip Recipes

Home Cooked Oriya Food said…
aahaa... love it...
bread is also on my list and yes keeps getting pushed further down with 1 excuse after another... Now the 7 hrs at the end doesn't sound any encouraging to me... so here goes 1 more excuse to my list...
You have done it! Yeah!
16 January 2012 at 09:02

Kavi said…
A lot of people are afraid of yeast! :) Yours turned out to be so great! I love the pic of your dough raising beyond the bowl!:D
-
Kavi (Edible Entertainment)
Ongoing Event:(Kid's Delight - Something Sweet)
16 January 2012 at 18:37

Kalyan Karmakar said…
@Somoo if i can do it then anyone can and lunch, nap, walk etc weren't part of the recipe so it's not entirely seven hours

@Tks Kavi...there was a time when the dough spilled down to the bottom of the bowl...i pushed it back in a hurry and forgot to photograph it
16 January 2012 at 18:50

Kalyan Karmakar said…
I used a brand of yeast called Tower which was higly recommended by Christina who took the class at Le 15. It is a dry yeast
16 January 2012 at 18:51

Miri said…
Congrats!! Those are some lovely rolls! And for your first attempt! I just baked some dinner rolls too last week and the smell of fresh bread baking just is incomparable!
Btw, you do need sugar in bread recipes, it feeds the yeast and helps it prove.
17 January 2012 at 08:05

Kalyan Karmakar said…
Thanks Miri. Actually it was very easy at the end of the day. In a way this was the second time but the earlier one was at class...sorry if I miscommunicated but yes there was sugar with the yeast. I meant salt with the butter
17 January 2012 at 09:56

Rhea Mitra Dalal said…
ah Kalyan! If you have killed the baking demon and made bread, I guess it's time for me to conquer yeast too!!
As much as I love baking I have always feared making bread. Don't know why, just a ridiculous mental block.
I guess it's time to go buy some yeast!!
Your bread looks fab! And that gives me courage :)
22 January 2012 at 09:53

Kalyan Karmakar said…
@Rhea: it actually turned out to be pretty easy so quite satisfying at the end
22 January 2012 at 14:04

congratulations. hope to see you make many more.

Sukanya said…
Baking a bread is always the most daring thing to do and nothing gives much pleasure than baking a bread at home. yours looks perfect, congrats
24 January 2012 at 00:29