My problem with Oven Fresh at Mumbai’s Shivaji Park isn’t the fact that they have moved from being a non vegetarian restaurant to a vegetarian one.

Nor that the memory of the chicken wings, egg and chicken salad sandwiches that we used to order from Oven Fresh from work when I was new to Mumbai would remain just memories.

It is just that the food I had there recently really sucked.

Oven fresh was an integral part of my initial stint at Mumbai. We used to order birthday cakes from there at work. Black forest every blessed time. Hungry PGites like me would polish these off. Their nutty loaves were a part of Christmas at work. Their sandwiches, chicken wings and soups provided succour on many despondent late nights or weekends at work in the salt mines.

I knew that Oven Fresh had turned rogue almost five, six years back and became a vegetarian restaurant. I went there a couple of times after that while I still worked close by. I remember eating quite an indulgent chocolate pastry from those days.

I returned to Oven Fresh a few days back after almost half a decade. I was meeting Bhavna, a Mumbaikar now based at Perth. Our choice of place to meet was dictated more by the convenience of the location than anything else.
Oven Fresh was packed that Friday afternoon. There were folks thronging the confectionery counter. The tables inside were all full though we managed to get a two seater soon. 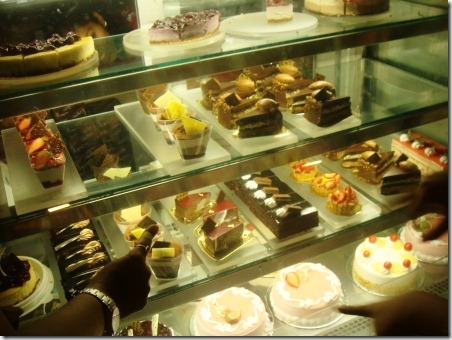 I scoured the menu and ordered a mezze platter. Normally a safe choice and something I opt for even at full service restaurants. I decided to give the full meal menu a miss. The sight of sizzlers with milky white unbraised chunks of paneer with soggy noodles and stodgy pastas that went past me were rather traumatic. 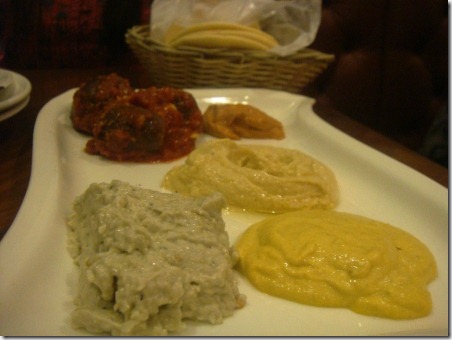 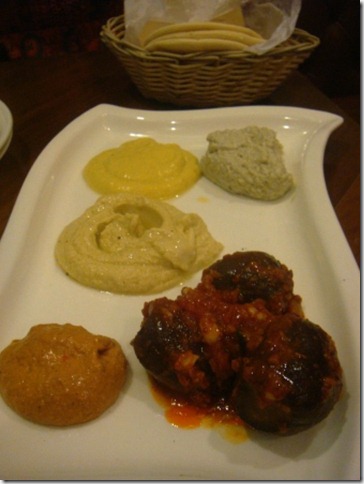 Both our faces fell when we saw the platter. There was something that looked like the Maharashtrian bharela baigan (stuffed brinjal) on the plate and some other stuff that looked like they would be more at home on the railway tracks of Mumbai. I thought it was only me who thought so and kept quite till Bhavna articulated the same thoughts.

We dug into the mezzes with the accompanying pita. A few dabs of each and we decided to leave the plate unfinished.

Yet around us there were people looking content as they ate. The buzz was that of a happy place. I usually try to avoid running down such places. Just as I dislike the idea of calling food ‘bizarre’. Sauce for the goose as they say.

The problem is that the mezze at Oven Fresh was bilge in absolute terms. 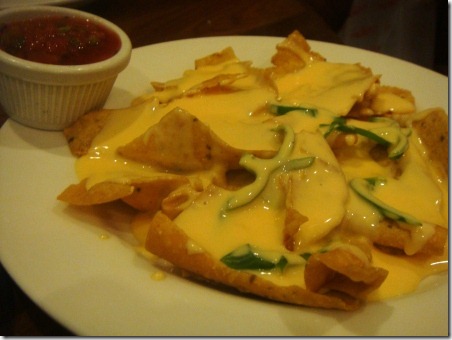 We then went for what we thought would be a safe choice. A popular choice here. Cheese nachos. A plate of the same at the next table looked appetizing.

The cheese nachos were indeed a big improvement over the mezze. Yet, after a point the sheer unidimensionality of a very basic melted cheese over crackers got to us. Dish number two remained unfinished too. 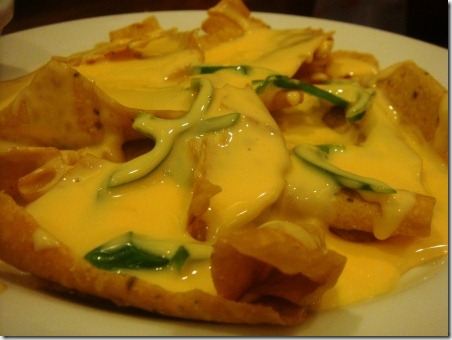 We thought that we’d give the desserts a shot as we had heard a lot about them. We stepped out to the dessert counter to place our order.

There was a huge array of pastries there. Problem was that they all had a Mrs Havisham-like decrepit, tired, wasted and withered look to them. Most pastries looked rather unwieldy and stiff. 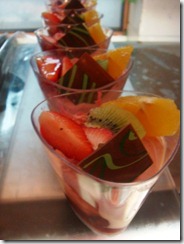 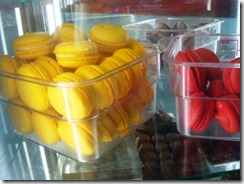 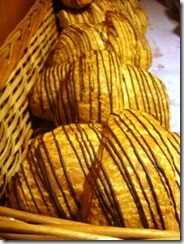 After crossing out all options we settled for a cherry baked cheesecake. Eighty rupees versus the two fifty odd of the Moshes and Basilicos of the world. The waiter came and unceremoniously plonked it on our tables.

We set upon the cheesecake with our spoons. We tried chiselling away at it for a while to no avail. The cheesecake was unbreakable. 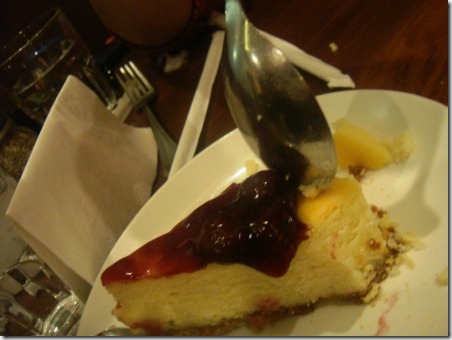 Three unfinished dishes and the message was loud and clear.
Oven Fresh was rather stale.

So we did what seemed to be the smartest thing to do at Oven Fresh, we headed to the neighbouring Barrista for coffee.

The lunch wasn’t a washout though. Thanks Bhavna for the huge blocks of Aussie cheddar and the plum jam from Harrods :) 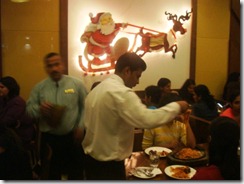 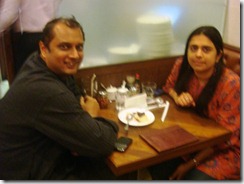 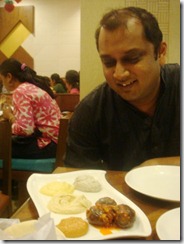 Amod said…
I know what you mean here. My dad was posted (SBI, Shivaji Park) right opp to the "Non-Veg" version of OF. The burgers were the best I'd ever had, sandwiches, pizza's, roll's...they were mean. It was regular till my dad got transferred ('01). Revisited somewhere in '08...shocked to see the menu and did what I never did, calmly walked out. And reading your post, I really wonder, why on earth did they go green?
3 January 2012 at 14:44

Unknown said…
the chicken soup at OF used to be something to die for! nowadays i only stick to the garlic breads and nachos here, that too for nostalgia sake...you are right, the place isnt even a pale shadow of itself!
3 January 2012 at 15:06

Miri said…
Thats really really sad - we haunted the place when we opened while we were in college and then continued to frequent it as a reunion place for our college gang after we finished college. Why on earth did they turn veg? and the mezze platter looks disgusting! Anyway better off at New Yorkers for a desi version of Mexican = they have atleast perfected their speciality!
3 January 2012 at 15:53

Unknown said…
I don't think I would be visiting Ovenfresh the next time I am in India. Thanks for mentoning me in the posts though.
3 January 2012 at 17:24

Mahasweta Dutt said…
yep,agreed. I used to go there growing up.. this place has been there for years. but the last time i was in bombay and went there, I was sorely dissappointed.Tired and withered is right with the look of the food.
3 January 2012 at 23:52

Swastik said…
Some problem with the landlord, I think. They didnt like Non Veg being served from their premises. Common story in Mumbai.
4 January 2012 at 11:07

Amrita Amesur said…
Apparently, a Jain purchased the place, the rest is history.
So is the lovely Chicken Stroganoff.
4 January 2012 at 12:17

Kalyan Karmakar said…
@Amod, Swastik, Amrita, Unknown...I had earlier ear heard that the owner had started following a guru and therefore went veg...point is even the vegetarian food was bad

@Bhavna, next time bengali food. grated some of the the cheese on my french toast this morning

@Gaurav...its a blot on the name of vegetarian places

Preeti said…
Oh dear!! All seems pathetic there...will never advice my sis on visiting OF. The melted cheese on your nachos looked more like daal soaked nachos!!
8 January 2012 at 19:30

Unknown said…
really good piece of information, I had come to know about your site from my friend shubodh, kolkatta,i have read atleast nine posts of yours by now, and let me tell you, your site gives the best and the most interesting information. This is just the kind of information that i had been looking for, i'm already your rss reader now and i would regularly watch out for the new posts, once again hats off to you! Thanks a lot once again, Regards, sbi po result 2014
26 July 2014 at 15:23