Bargain hunting at Colaba… 5 All Day

The only thing that could make me drive to town on a Sunday morning was the thought of a lunch at Ling’s. It was almost a month into the new year and I hadn’t eaten there yet.

So imagine my disappointment when I reached there a couple of Sundays back at the end of a long drive and saw that Ling’s was shut for the Chinese New Year. Gosh who does that? That’s a bit too authentic for me. Specially when you have Bengali run Chinese restaurant chains advertising Chinese new year festivals. Well I guess that’s why we love Ling’s so much and here’s wishing Baba Ling and the rest of his family a great year of the dragon.

We were looking for a place to eat when I suddenly saw the restaurant 5 All day opposite Ling’s. I had heard of this place. Opened recently I believe. Run by the folks who run Restaurant 5 at Santa Cruz. One of our favourites. 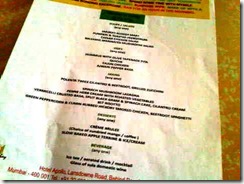 We stepped in. Liked the ambience immediately. It had a nice stretch feel to it…lounge sofas as well as tables …the overall sense was cool and placid…a comforting oasis-like nook in a sunny afternoon.

We were seated by someone who was either the owner or the manager who asked us what we would like and then sent one of the waiters too us. Unlike the first gentleman, the waiter was completely clueless though. He would smile through the order and even when we changed it…and then get what we had originally asked for without noting the the changes. The confusion was because they later told us about the set meals which they had from Monday to Friday at Rs 475. Seemed like quite a good option in comparison to the more expensive a la cartes. Thanks to the confusion we ended up eating one one set meal and one a la carte and experienced both the highs and the lows of the place.

The confusion was also because the waiter had no idea about the menu…every question ‘is the ham and cheese muffin salty or sweet”, “what is the crunchy stuff in the mash”, “is coffee creme brule there” was met with “I have to ask the chef”. Running to the chef fifteen times while taking the order kept the waiterslim no doubt but did make the ordering process to be a bit painful. Try to get hold of the manager/ owner at 5 All Day if you want to know about the menu is my advice.

Well getting back to the food the set meal was a pleasant surprise. You get 4 to 5 choices for each course. Unlike what I thought each course was ample, plated well and put together as if they were standalone dishes. So there was a very nice peach ice tea, a fresh & crispy lettuce and balsamic mushroom salad which we quite liked. Next came a pretty well made hummus and crisp pita plate.  For the mains we went for another vegetarian dish. This was penne in cheese sauce….again beautifully made with a lovely lingering taste of good cheese. Dessert was an an apple terrine which also came with a tiny muffin and ice cream too. Good stuff.

Even though one of us took the set meal but they did come and offer us extra pita or two spoons for the dessert which was a nice gesture. 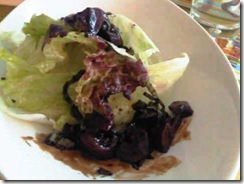 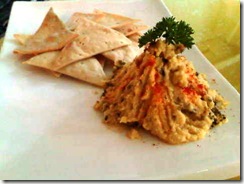 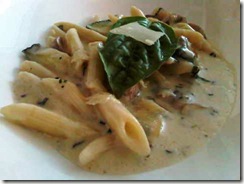 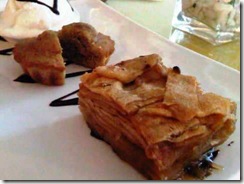 I went for the a la carte. Remembering the lovely zuchini and cheese fritters that I had at Fratelli Fresh Sydney I went in for the zucchini and goat cheese here. Unfortunately these were not fritters. Strips of leathery zucchini rolled with creamy goat cheese layered in with a nice nutty taste relief. The dish was competent but beyond a point there is only that much slithery zucchini that one can have. Plus I would have preferred crumbly goat cheese to a creamy one.

My mains of the Bengali themed kasundi betki at Rs 550 versus the Rs 475 of the set meat was very disappointing. The fish was everything that a Bengali fish fry shouldn’t be. It was rubbery & tasteless. The skin was on. The fish was not properly deboned. The kasundi marinade a waste. The mashed potato stodgy. The crouton like Bengali boris (which our waiter was mystified by even after he asked the chef) didn’t add much to the dish. A complete waste of money specially after the lovely braised fish with kasundi potatoes that we had had at Le Pain Quotidien a couple of Sundays before. 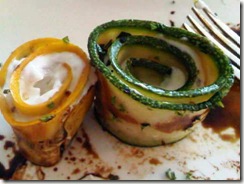 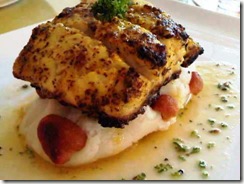 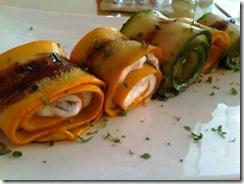 My take on 5 All day is that it is a good place to go to specially if you can have the set meal. That’s quite a fantastic deal. Otherwise there is a lot of stiff competition in the new age western themed restaurants at Colaba. The a la carte prices at 5 All Day borders on those of the Indigo Delis, The Tables and the Le Pain Quotidiens. And they need a bit more going if they want to take on the big boys of Colaba.

To start with a more informed staff would help.

Anonymous said…
Hi, I like your posts (esp. the Fort ones) and read the blog pretty regularly. I often come across your erroneous use of "marinate" instead of "marinade"...
"The kasundi marinate a waste".
Nice blog... keep posting! Cheers!
L
1 February 2012 at 13:35

The knife said…
Thanks for pointin it out L. Yes,I do keep mixing it up. Another fired pointed it out too. Just changed it
1 February 2012 at 13:50

Culinary Muse said…
Hey even I was going to go to lings last weekened but we called for bookings and got to know they were shut.

I like the sound of the hummous & pita & the penne, should try this since i stay very close to this place