The only thing tougher than spelling its name is locating Yauatcha at night.

Yauatcha is the cousin of Hakkasan and has opened recently at BKC, Mumbai. The other branch is at London from what I understand. BKC does get rather empty at night and even someone like me who goes to BKC often for meetings missed a few turns before finding Yauatcha.

Yautacha pretty early in its life has become famous for its dim sums and macarons and seemed like special enough place to bring in my birthday earlier this week.

We reached walked up the macaron counter to the main floor. The decor with its high ceilings, glass and chrome is pretty international chic. A lot more spacious than the average Mumbai restaurant. Possibly an advantage its location at the still developing business district of BKC.

The flipside of the ‘developing bit’ though was that the local mosquitoes like to hang out here too. This was a bit irritating specially towards midnight. Something the management of Yauatcha needs to work on.

We flipped through the wine list and did a double take. Many of the drinks were in four digits and some well into it. I had left the car at home so that I could drink. Finally settled on a cocktail called cha la lai at Rs 750 (15 USD) plus takes which was the cheapest around. That plus at diet coke cost about Rs 1120 (20 USD).

I remember the figure as they forgot to add the bar bill to the bill and I had to remind them.

So my advice is to stick to the food at such places. Money better spent.

The menu showed us that there is a lot more than dim sums at Yauatcha.

We started with the dim sums. No assorted platter a la Hakkasan here.

So we chose one steamed dim sum and one fried one. Lot relieved to see sub Rs 500 prices here. 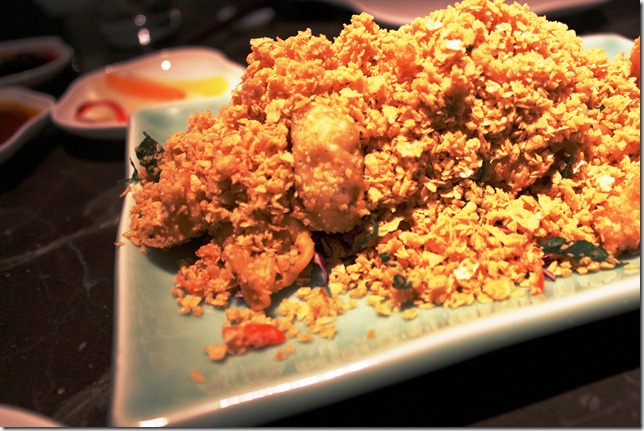 The first one was fried chilli squids, with pandan leaves and oats, which the waitress suggested. Left us very underwhelmed as we desperately tried to search for the flavours. The squid was lost in the tempura like batter and the oat shavings were a real mood dampener. The dish was not bad but we expected more and it left us rather underwhelmed. 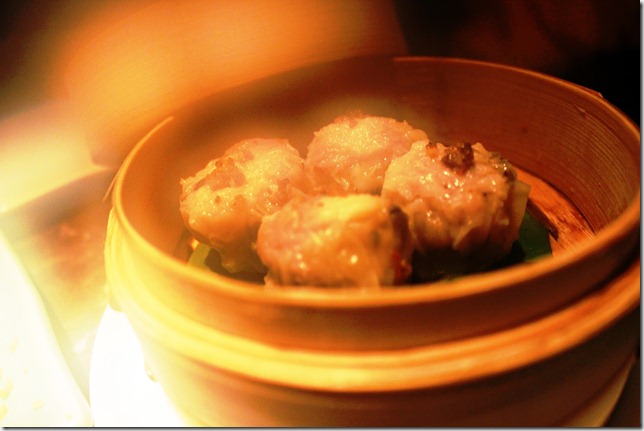 The next dish or pork and prawn shumai, a lot cheaper at Rs 285, was as strong a comeback as Venkatesh Prasad getting Amir Sohail out after Sohail hit a four and showed Prasad the fence in the World Cup quarter final of yore. Suddenly our evening came alive in the midst of the steam floating out of the dim sum basket. The taste of the prawns dominated and took your taste buds on an epic taste journey which made you smile with deep contentment. 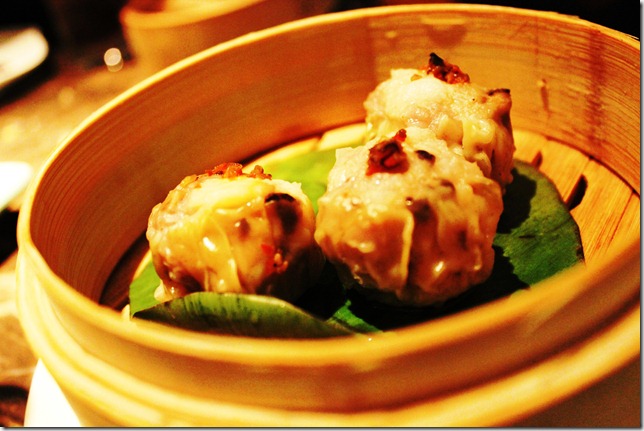 We were ready for our mains.

Seafood Penang kwetio noodles. Very fresh seafood…large prawns, squids etc but again as the ad goes, there was ‘something missing’. It was a competent dish but the taste didn’t really excite you. The flat noodles were a bit too soft. To be honest I’ve not been a fan of the char he teoys that I have had at Malaysia too. But they definitely had more going in them for your palate unlike the one at Y. 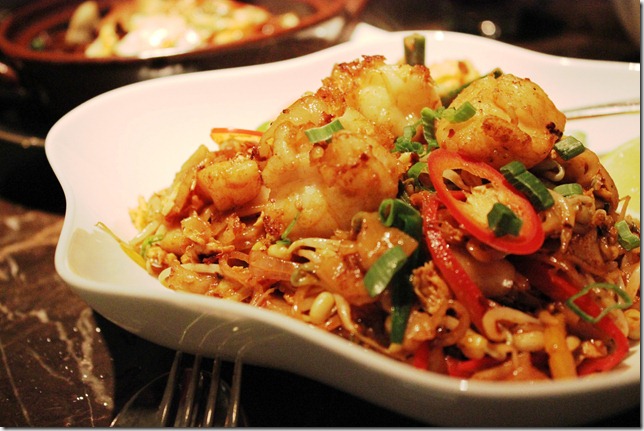 And then again the schizophrenic u turn for the better.

Our sides of double fried pork belly (Rs 650 / 13 USD +) was another operatic dish. Thin sliced pork belly was rather poetic. A demure delicate high brow version of the usually chubby floppy cuddly cut of meat… slices of meat that defined epicurean that evening. 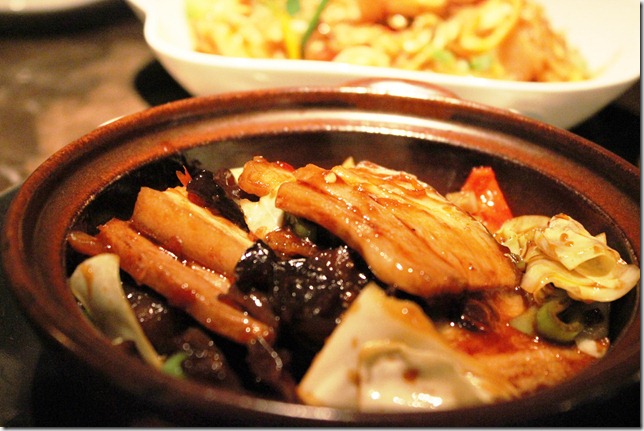 A dish cooked in a delightfully zestful and feisty condiment mix which was sharp and brought alive the noble meat  with sharp spongy bites of black fungus which seemed like a delightfully forbidden treasure.

At the stroke of midnight I bit into the last elegant slice of pork belly. Couldn’t think of a more gastronomically bombastic and yet profound way of bringing in my birthday. 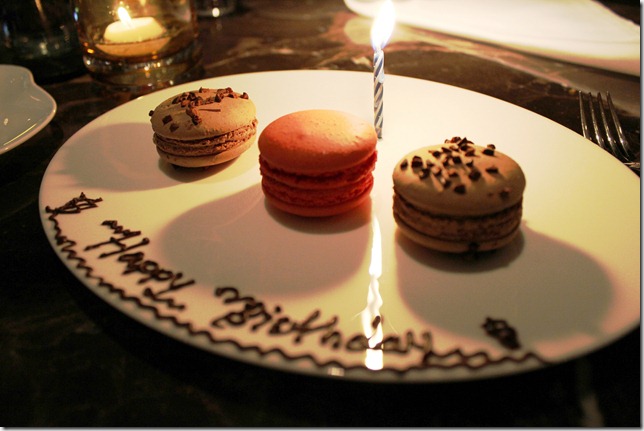 Well, yes till I saw that they charged us for it.

Now let me make it clear that we were not looking for a freebie. We hadn’t even mentioned the birthday while placing the booking. Something which often leads to cakes or champagne on the house at places such as Mainland China, Peshawari and I am sure lots of other places.

The cost of the macaron was miniscule in the context of the dinner. My problem was with their charging us after the candle and the manager coming and wishing us.

Sort of like giving me a birthday gift and then asking me to pay for that. Which is what they did

Now let’s get back to the macarons.

The macarons were incredibly stupendous.

I was introduced to macarons a couple of years back. Had some pretty excellent ones at Mumbai which matched up to the macarons that I tried at Lindt Cafe Sydney.

The ones at Yauatcha were even better.

We tried chocolate where the shells had a nice grainy chewy bite. The chocolate filling blew us away with its dark, intense mystique. The sort of experience that made you slow down with each bite as you didn’t want the experience to end.

Apart from our two chocolates I’d asked for a raspberry macaron too.

Again life defining. If the chocolate left you with a feeling which was deep and brooding then the raspberry macaron left you playful and bursting with energy.

The first bite brought back a rush of memories. Of the raspberry rocket ‘lollies’ of England that I so missed when I came to India in the early 80s. The raspberry macarons at Yauatcha took me back years and decades which is such a good thing on your birthday. 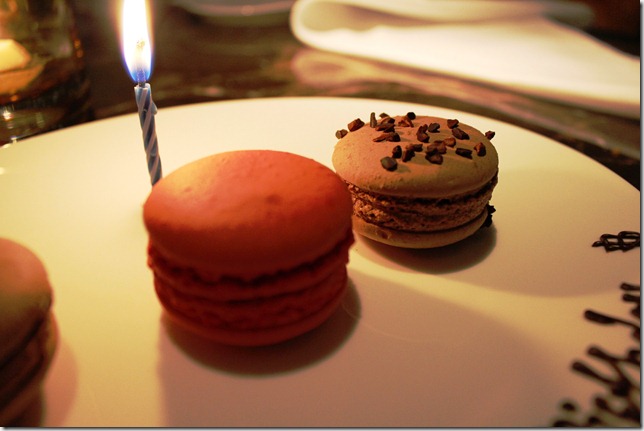 We were the last to leave after we said goodbye to the mosquitoes. Happy with the choice we made.

Stay off the booze and order sensibly and Yayutcha is likely to fit the bill. 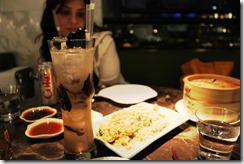 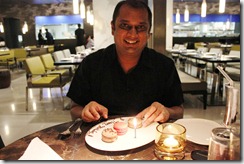 This is the last of the 3 links to The Foodie show @rushinamg & food blogging with a few of us joining at the end for the potluck @saeek @nikhil_merchant @ticklers For seem reason I keep grinning manically. The first two links are on the site http://www.timesnow.tv/Of-food-bloggers-and-friends-III/videoshow/4395631.cms the double fried pork where Kunal talks of the star anise is what I cooked

Anjali Koli said…
Hey Kalyan was so excited to see you on Times Now! was browsing the TV aimlessly when I recognized Rushina, Saee and you but I got to watch only the last bit. Way to go guys!!!
12 February 2012 at 12:06

radhika said…
Hi Kalyan,
the highpoint of my meal at yuatacha was definitely the macaroons as well. do you have a blogroll on your site? would love to know the blogs/links that you follow/read? thanks!
13 February 2012 at 10:15

Prachi said…
Hey Kalyan! Was super exited to see you guys yesterday. Foodie is one of the shows, I put a reminder on since the past 2 years. Sunday 11.30 am is fixed with Kunal's food adventures. When I saw Rushina and then the title, had a niggling feeling that you guys will be up on air and Oh boy! was I excited!!! Way to go guys....
13 February 2012 at 12:32

Kalyan Karmakar said…
Thanks for writing in Radhika...we no, don't really have a blogroll...but did list a few of my fav blogs in this interview recently http://blog.blogadda.com/2012/02/09/kalyan-karmakar-finely-chopped-food-blogger-interview