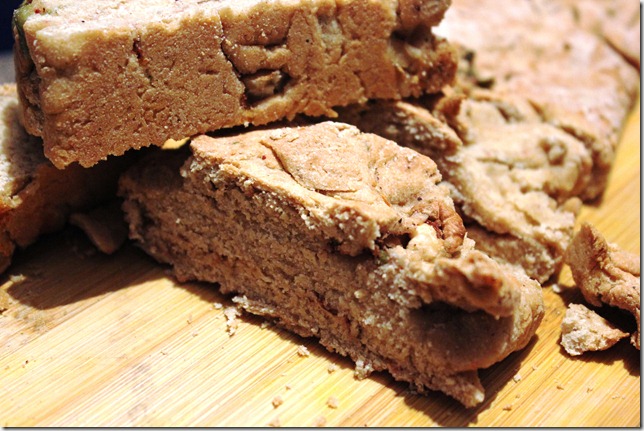 My first attempt to bake a bread loaf led to what could politely be called a sausage and basil pesto pie.

I had mixed the dough and all the previous night and put it to bake in the morning before going to office for breakfast. I think the problem was that the dough didn’t prove properly and hadn’t risen enough.

This is how it looked. 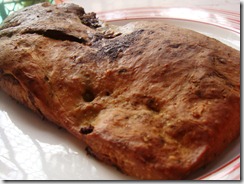 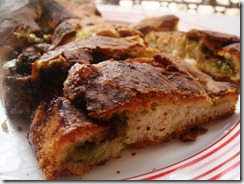 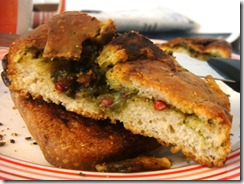 But I had to give bread another shot. The bread baking class that I attended at Le 15 Patisserie couldn’t go to waste. Plus the bread rolls that I tried at home had turned out to be closer to what we had in class after all

So last Saturday night I hit the ring again. This time a bigger challenge. A whole-wheat bread. Even tougher. Multi-grain.

Got the the multi-grain idea when I saw the Pillsbury multi-grain atta pack at Vijay Stores. Was disappointed to not find whole grains in it. I guess this must be because the atta is meant for making chapattis.

Shamim or @butsandifs on twitter suggested adding walnut flax seeds. I added some chopped walnuts along with chopped olives. The walnuts took the bread to another level in the final analysis. I also seasoned the dough with spices such as sumac, zatar and baharat to give it a Mediterranean flavour.

The commonly held belief is that commercial whole wheat bread has a portion of flour in it. Some even say that ‘brown’ bread in shops is regular bread coloured with caramel. And apparently there was a sign at a local Irani Bakery once which once  said “real whole wheat bread cannot taste good”.

The kneading bit is a lot more trickier than when using soft well behaved processed flour. All thoughts of kneading being ‘therapeutic’ went out of the window as the flour stubbornly refused to come together. One had to keep feeding it water…little clumps formed but not a nice pillow-like dough. Finally what I did was make three ball of dough as the entire mass refused to come together at one go. Once the three dough balls became a bit firm I gently joined them and made a larger dough ball. Some frustrated punching was part of the process though not in the recipe.

I remember that the other problem the last time I made bread was that the dough didn’t ‘prove’ (rise with the yeast and heat and increase in size) enough. I guess the outside temperature wasn’t warm enough in the evening. So what I did this time was switch on the oven and then place the dough on top so that it rose in the warmth. Did work. And after the second proving I even went for a walk late at night before the bread was ready to make.

When I came back I put the dough in the oven with another tray beside it. The second tray had a leg of chicken and some mushrooms marinated in Lenny’s barbecue sauce. Both got ready in the same time. Multitasking as they say.

As I sat down for dinner at midnight I wondered if the the 3 hour long cooking process was a tad elaborate and whether it was worth it. I could have just roasted the chicken and bought bread.

But as I munched on more than 2/3rd of the loaf I was pretty sure that there was no bread in the world that would taste so sweet at that time of the night.

So here’s the recipe for the Mediterranean themed multi-grained bread  which is grounded on Christina Fernandes’ recipe at the Le 15 Patisserie baking class. 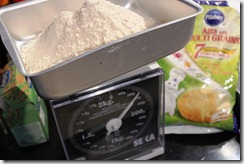 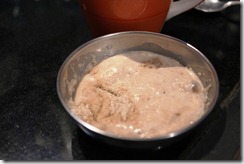 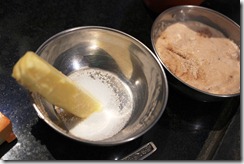 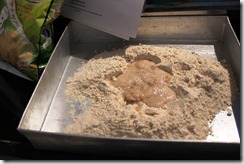 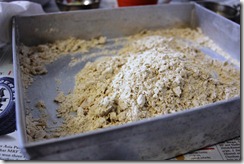 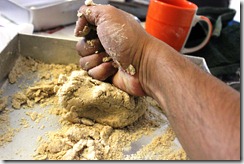 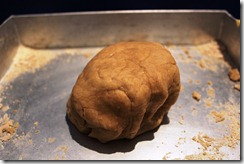 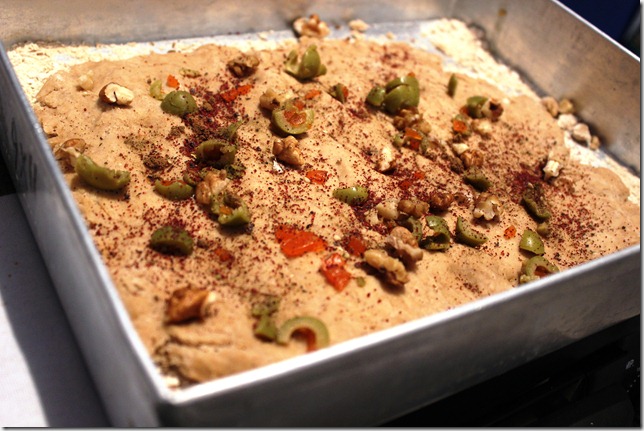 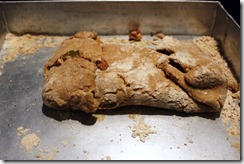 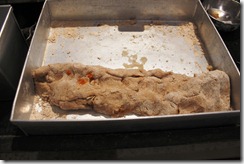 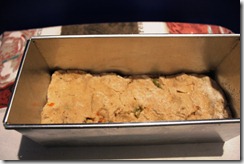 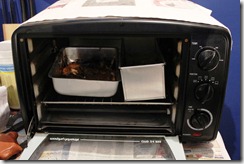 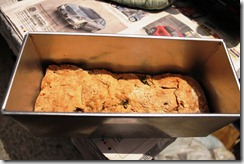 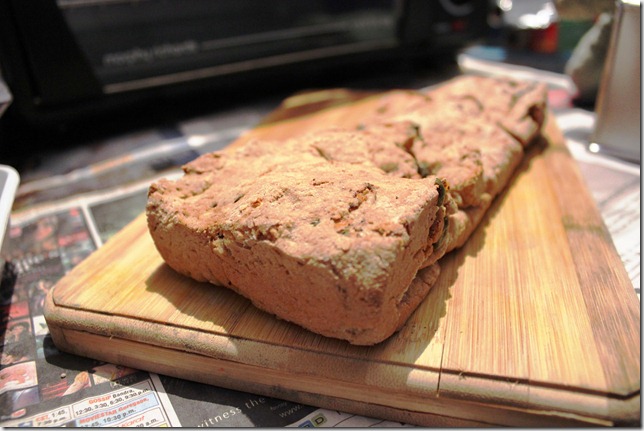 The one thing I learnt at the end of this, with apologies to Mary Antoinette, is that it is easier to bake cakes than bread. 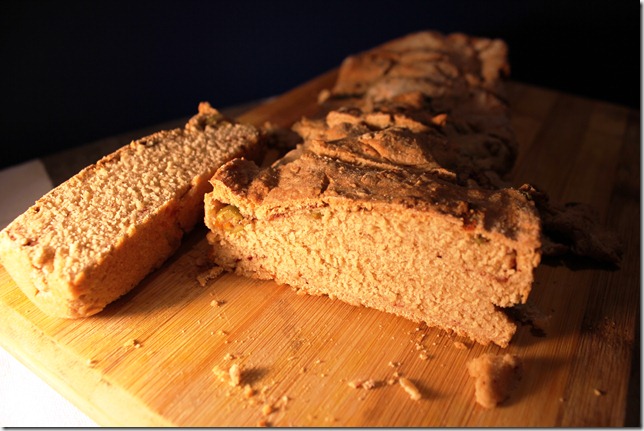 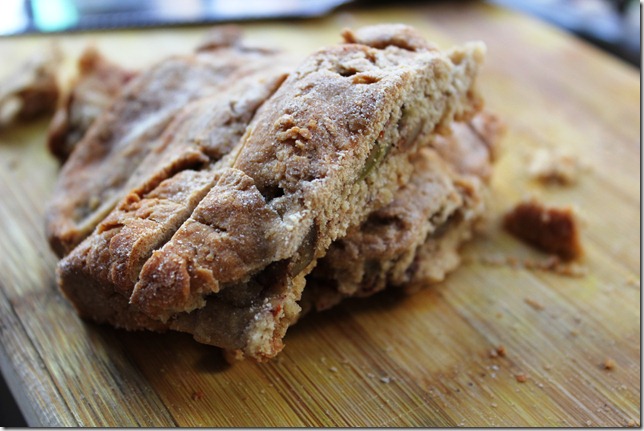 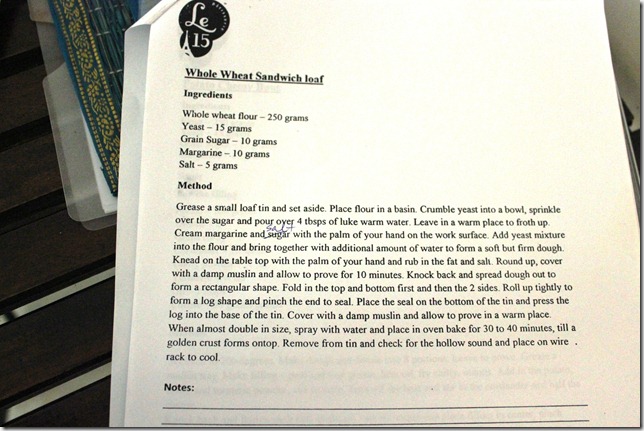 Sassy Fork said…
A classical case of food and exercise combined for good health :) Bravo on the effort!
Just a point to add that making it with margarine will make it unhealthy as its a trans fat
25 February 2012 at 09:34

Sayantani Mahapatra Mudi said…
i love freshly baked bread and this is one great loaf. its good to see so many baking recipes coming from you and also a dessert (brownie) picture on your header.
it was a proud moment to see you onscreen. i dont know to how many I have passed on that video link, with a tag a food blogger like us...:-)
25 February 2012 at 22:04

Sharmila said…
Awesome! Even the thought of baking a bread scares me. A little warm water always helps when kneading a dough.
26 February 2012 at 09:17

Kalyan Karmakar said…
@Sayantani...thanks so much for your comment...and for all the warmth and all well wishes...made me feel really good

Yes, I guess the first season of 2012 is def the season of baking for me

@Sharmila...well baking's happened only bec of all the people who kept telling me to go for it

Minnie said…
Hey :D
one completely different question, what kind of cake is that on the picture on top of your blog? it looks delicious do you have a recipe?

Kalyan Karmakar said…
@Mayte...it's the brownie cake that I baked on my birthday> here's the recipe http://www.finelychopped.net/2012/02/old-dog-learns-new-tricks-brownie.html
28 February 2012 at 01:42

saffronstreaks said…
Hi just watched your Mumbai street food video on youtube, I must say you did a very good job, looks so professionally shot. cudnt saw chaupati much in video though.
love all the butter in pav bhaji .. :)and bheja fry too
do upload more such videos, its heaven for street food junkies like me.

Hamaree Rasoi said…
Kudos to you for trying your hand in Baking breads. And The header pictures looks awesome...Will look around for the recipe in your blog.

Kalyan Karmakar said…
@Saffronsteaks Thanks so much for your comments Sukanya. Glad you liked it. The credit for the production though goes to the Tremendous Entertainment who did the show for the Travel Channel...definitely amongst the best in the business

Thanks Deepa, it was quite satisfying. Here's the link to the cake recipe http://www.finelychopped.net/2012/02/old-dog-learns-new-tricks-brownie.html
6 March 2012 at 11:28