The thing that sucks about inching towards your forties is that that so many people who were there when you were growing up begin to leave this world.

Just got to hear one such sad news from my mom when I called her during the walk this evening.

She told me that Kanjilal Jethu, the father of my ‘best friend’ from The Wonder Years in our building at Calcutta, Rupu, passed away a short while back.

It’s difficult to imagine that this gentleman with his ramrod straight gait, military moustache, booming voice and hearty guffaw is no more. One of those rare characters who have such a strong influence on one during one’s impressionable years.

I met Kanjilal Jethu after years when I was at Kolkata two pujos back. Made me feel like a ten year old again. seeing him reminded me of those growing up years … of the vacation hours I had spent at their flat playing video games with Rupu and  watching Flash Gordon, The A Team and Knightrider on Bangladesh TV. Sitting patiently one Christmas evening while Kanjilal Jethu carved a whole roast chicken that aunty had cooked possibly one Christmas night.

I met Jethu a couple of years back when I was at Debjan during the pujos. It was Nobomi afternoon. Time for the biryani feast.

I opened the post I wrote then and saw the photo we had taken together.

I saw my grin in the photo and remembered one evening at Calcutta when he told Rupu and me in a booming voice  …. 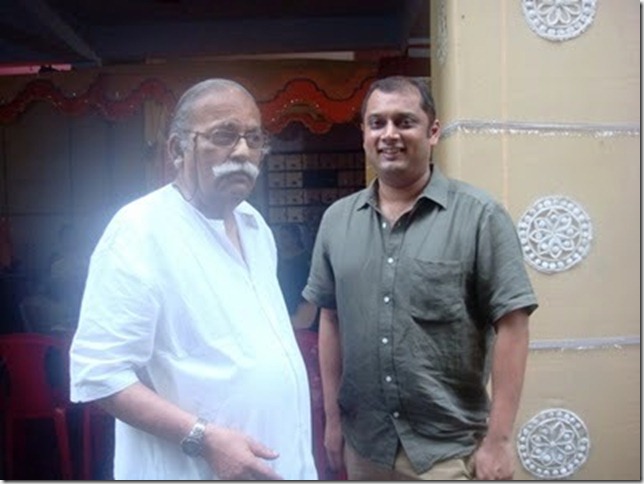 Gia Fernandes said…
Sorry for your loss. He seems like a lovely person. Ironically, death is probably the one thing that makes us all sit up and take a good look at life.
17 February 2012 at 12:27

Pinku said…
with every such person who has seen you grow up a bit of your childhood also dies somehow.

one less person to say, when you were a kid, you did such and such thing.

one less person to be proud of who you have become and who knows what a struggle it has been, without being told.