Suzette had a bit of a teething trouble as the BMC demolished the outdoor extensions of the restaurants in its lane as local residents had complained about the chaos. This was soon after Suzette opened. Most places, including Suzette, were back in action by the next day though.

Suzette’s been packed since then. In fact there is a high proportion of expats at Suzette whenever I pass by. With the focus on crepes, still pretty rare at Mumbai, menu statements such as ‘100 pc organic buckwheat’ or ‘we wash our vegetables in filtered water’, expat owners often taking the order, Suzette presses the right buttons with its target audience.

On a separate sociological note, using politically correct terms, I wonder why most of the expats in Bandra are Caucasians with very few Asians or African Americans around.

Anyway back to food now. We went to Suzette last week when the evenings still had a pleasant chill. We managed to get a seat inside. The decor is quite quaint and cheerful. Warm but not grand. Smart not posh. There are only three tables in the the inside section so most, unlike us, were sitting in the open.

Now I strongly believe that alfresco seating doesn’t work in Mumbai. Specially when you are paying a premium. While it was still pleasantly cool that evening it’s become quite hot now. The lane where Suzette is located is a busy one. So heat and dust, honking, mosquitoes…sitting by the road in a cafe was fun at Melbourne, Sydney, Lucerne, Bern, Montreaux or even Baga…not at Pali Naka.

I didn’t have the camera so took some BB pics. Though if you see the post from Suzette in South Mumbai…its hard to make flat crepes look much better even with a better lens and camera. A bit of a photographic challenge. The crepes at Suzette are not the most appetising looking of dishes. The plating is quite ordinary for the cafe’s froufrou trappings and prices. In fact there is no plating.

The staff at Suzette was knowledgeable, smart, friendly… gave a a good feel and got our orders right. Earned the fixed service charge added.

We had a smoked salmon crepe when we went to the Suzette in town. This time we went for the Latine (Spanish Serrano ham, mozzarella, mascarpone, fresh basil).

I don’t know how crepes are meant to be but the fillings of both the crepes that I had at Suzette were sparse and thin…what my friend Jit would call the ‘essence of ham’.

The combination was good though…the crepes had a nice rough texture and a slight bitter taste possibly because of the buckwheat…the taste grew on you…the meat and cheese were nice and sharp and managed to make their presence felt…even if barely. 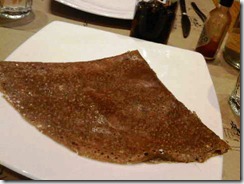 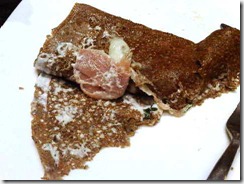 We tried a dessert crepe too. A Belgian chocolate sauce one. Again with just the ‘essence of chocolate’, the sauce surprisingly sweet, not distinguished or different from what you would get in the chocolate sauce that they add in places such as Shiv Sagar or Mewad ice cream stalls. Very plebeian. More Manama than Belgian.

The savoury crepe was better than the sweet one even if not life defining.

I think K summed it up well when she said ‘crepes are dosas with sub-titles’. 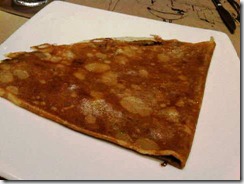 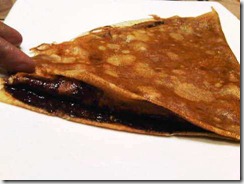 Now, here’s the thing. You should eat crepes while they are still warm and that is how they get it to your table at Suzette. The crepes are flat, with very little filling inside. It doesn’t take you more than 5 minutes, at the most, to finish a crepe. Even less if you share one.

Our order of two crepes, not the cheapest ones on the menu, and two cappuccinos, not the most expensive coffees on the menu, cost us around Rs 920 or close to 20 USD. For a ten minute experience which couldn’t really be termed as ‘orgasmic’ as the food writing cliché goes. At a lane next to home. In a setting that didn’t awe.

You do the math. 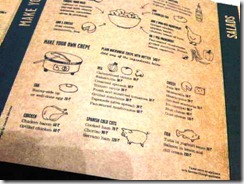 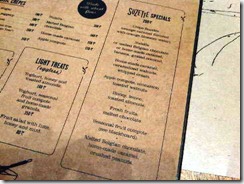 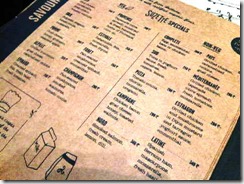 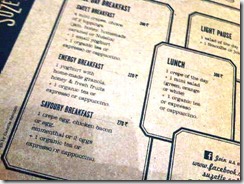 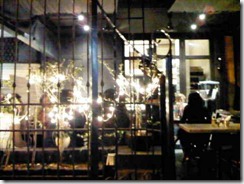 dipikasingh said…
ha ha. you're so right abt that dosa bit. we thought so too. I went there twice. The first time i got seated inside. The second was only to catch up with a friend over hot chocolate ( which was quite nice - almost up there with the Theobroma hot choc ) outside and a nightmare. The mosquitoes gave us hell.
19 March 2012 at 11:09

@Saee and then i can't complain that it's next door

@Kurush: someone on twitter told me that fillings shouldn't be an 'essence' and the crepes should be thin not chewy

@Saee and then i can't complain that it's next door

@Kurush: someone on twitter told me that fillings shouldn't be an 'essence' and the crepes should be thin not chewy