Caveat: This is not a paid review. Even though it reads like that

I don’t know about you but I can’t start my day without an ample breakfast and a hot cup of coffee.

The problem is that I am not at my most chirpiest in the morning and am always racing against time on work days. So getting breakfast together is a problem. I don’t like cold cereals despite my flirting with most forms of them.

I need a hot breakfast.

The sort which makes your tummy look up at you and give a smile of approval. In an ideal world one could just fry some bacon and put it in slices of soft buttered bread for breakfast. In an ideal world I would be writing this post lying on a deck chair at my villa in the French Riviera languorously looking on to the sea.

In real life, I resort to tossing up a quick egg white omelette to have with bread or, on a day when I need some mollycoddling, I fry up some Indian French toast. Now that I have an OTG, with its falling parts and all which Morphy Richards doesn’t bother fixing, I sometimes grill some bread with cheese and add some chopped tomatoes or roast chicken to this if around.

Most of the above will make a dietician writhe with angst. Plus the options get a bit monotonous as far as I am concerned.

Always on the lookout for no hassle breakfast ideas I picked up a pack of MTR Breakfast Upma Mix at the grocer’s the other day. I vaguely remembered my mom saying that she uses this. MTR is one of the pioneers of ready to eat mixes in India. A fact I remembered from an internet search we did in the early 2000s during a pitch for a food account when I was in advertising. Had the good fortune of eating at the MTR at Bangalore during a recent work trip. Good stuff. 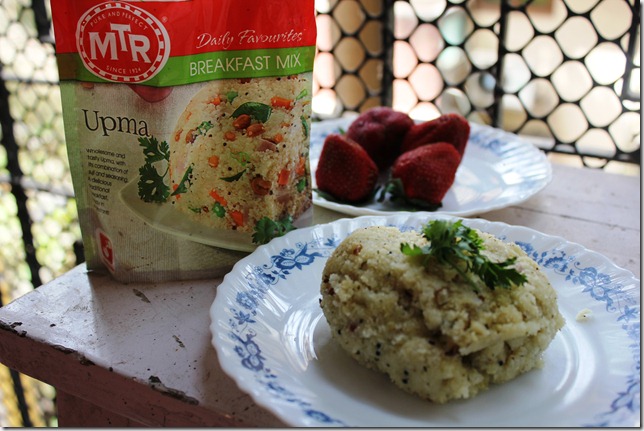 Now the reason I stretched this post so far is that the actual cooking experience took about 3 minutes and was a three step one. Sp the post wouldn’t be more than a paragraph. 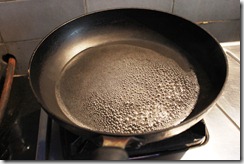 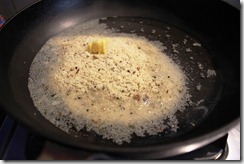 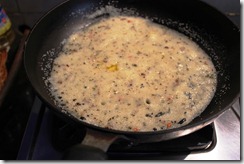 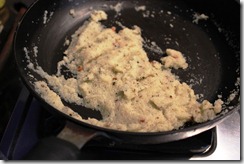 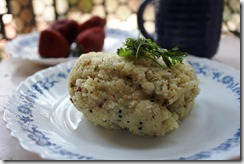 I was really awed by the end product. I am always sceptical of the finish of ready to cook meals. Usually turn out to be synthetic. Not the MTR upma.

The texture was perfect…fluffy and surprisingly fresh…not stodgy or oily or lumpy or cold as I’ve often found the upmas in office canteens or highway stops to be. The balance of salt and sweet just right. The bits of daal and mustard seeds in between giving an interesting crunch to break the softness of the upma. Not spicy at all. Quite light on the palate and yet well flavoured. Just what one needs in the morning. A nice, warm, carb boost.

I guess you can add chopped vegetables to it. That adds a step more. Perhaps if you chop and keep it the previous night? You know carrots, peas, tomatoes, sweet-corn and stuff. 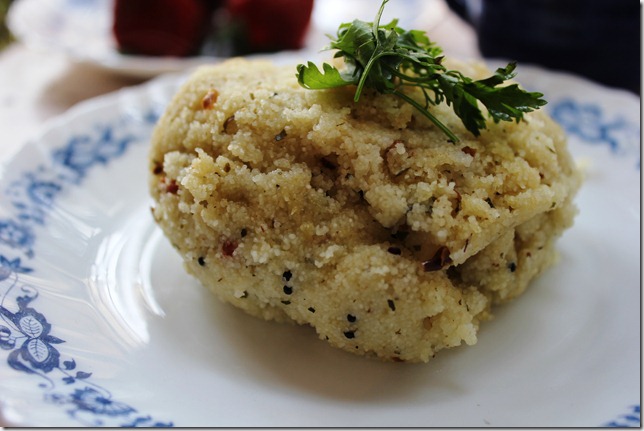 There was a time when I avoided Indian breakfasts as I didn’t like to start the day with strong  flavours. Western breakfasts worked for me. This has changed over the years. The MTR upma turned out to be a pretty good option in the Indian breakfast genre. And for a change it  was really easy to make unlike other Indian breakfast options.

Now check this post which I found in my records while searching for MTR. Turned out that I had tried out the MTR upma 3 years back. The upma apparently cost Rs 35 or 75 per cent more then and was inedible.

This is some comeback MTR. Hat’s off to you guys.

Note: Folks have written in to me saying they like the MTR dosa, idli mixes and sambars and so one…well for me the upma was the simplest to make and I think that’s where I will stop. Can’t lose the readership of the bacon-worshippers after all

Anonymous said…
Couldn't agree more -- this is one of the only things I'll eat out of plastic frequently! I throw in some Bise Bile powder for a little spice. I like how dry yours is, mine is usually a little more pasty.
24 March 2012 at 22:52

ba-xi said…
tried the upma mix last week and was one happy camel post downing the entire pack. love to sprinkle chevda on upma (contrasting, yin-yang textures) and u might want to try that sometime...
24 March 2012 at 23:12

Kavi said…
I tried the MTR Rava Dosa mix.. It was a disaster! That put me off ready to cook meals altogether. I'm sure if you used some simple semolina flour, you'll have a better upma than MTR.
25 March 2012 at 12:34

Kalyan Karmakar said…
@Bombaywire I guess I got the water quantity right...liked the texture

@Shishir sev with upma should be a good contrasting combo...i think i've had it

@Kavi: have you tried it recently?

Sharmila said…
I too avoid ready made packed food due to the oil, sodium and preservative contents. But yes, they are a boon when life is in a fast forward mode.
27 March 2012 at 11:27