I am normally not secretive about my discoveries or sources.

Yet, I kept quiet about this one for a few days. I had my reasons.

I happened to go to Ainsley’s grills & More of the tongue moile fame, at Bandra’s Pali Market, a few days back. Ainsley’s is run by the same folks who run the restaurant at the Bandra Gymkhana. I thought that I would take a chance and ask for some of the traditional Goan/ East Indian/ Mangalorean Catholic community food classics – sausage chilli fry, vindaloo and sorpatel. These are not on the menu at Ainsley’s. Closest that they have are beef chilli fry and chicken vindaloo. None of the pork stuff.

That’s the irony of Mumbai. There are hardly any restaurants where you get any of these Catholic Indian West Coast preparations. You’ve got the tiny Martin’s and Snow Flake in South Mumbai and that’s about it. Yes, there is Goa Portuguesa at Mahim but I know of Goans who turn their nose up at the mention of it.

At Bandra there are a few cold storages such as Jude’s or Mark’s which occasionally keep frozen vindaloos or sorpatels but no restaurants as such. You can also buy Goan sausages here and cook them at home. Candies stocks sorpatel but only on weekends and they are usually out of stock. Your only other hope is the Christmas fair at Bandra Gym where Christian ladies serve home cooked pork delicacies and the club restaurant sets up a stall too.

So I went up to Anthony, the ever smiling owner of Ainsley…you can’t miss him with his white shirt and moustache, twinkling eyes and warm grin… and asked, hoping against hope …

Me: Do you keep chilli fry, sorpatel, vindaloo?

A: Not here. But I can get it from the restaurant

A: You will have to tell me in advance though

Well actually he sent it over to my place next door in less than half an hour. Some sorpatel and chilli fry. Spectacular meat. Nice and hot. Fresh, visibly different from the frozen stuff. The chilli fry was slightly sweeter than what I am used to. Had a heavier proportion of garam masala and was not as tangy as it usually is. Anthony later said that this was apparently because they had made the East Indian and not the Goan version.

This was a great discovery. But I kept quiet for a few days. I wasn’t too sure about how stable this pork route would be…Bandra Gym…Ainsley’s…our house…and I knew of a few people who would love this. So I thought I’ll write about it after we were done. Didn’t want order clogging up the supply before we had had our fill. Yes, call me selfish if you want to. My friends got the first rights on this.

So we met on Wednesday night. I went earlier in the evening and placed my order I requested Anthony to do the Goan version of the dishes rather than what he called the East Indian ones. He said he’d try.

The dishes were delivered and our adda started.

That’s what I like about being a Bengali. You can spend an entire night chatting over Goan pork and yet feel at home. Well, that described the lone Parsi with us too.

(Talking of Bandra, its Christians and cosmopolitanism read this recent article by Dilip D’Souza. An interesting perspective) 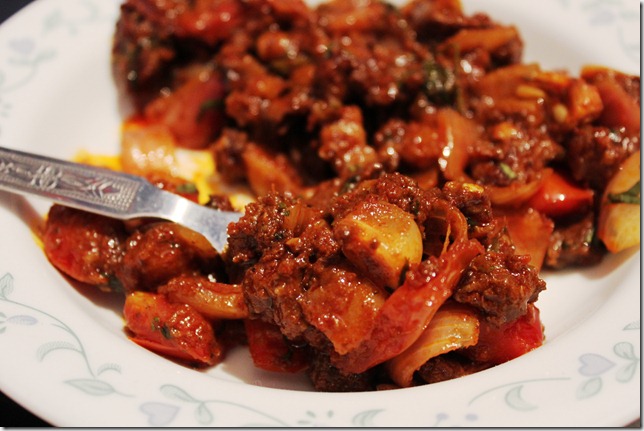 The sausage chilli fry kept the adda going. This was different from the sweeter version that I got the first time. from Ainsley The one Anthony said was East Indian.

This one was nice and sharp. Tangy like a good Goan sausage chilli fry. Yet, not overtly so as someone pointed out. A ‘Bombaiya touch’ tempered it according to him. This had the inherent heat of fried chillies and tomatoes balancing it. Cubes of potato giving just that lil bit of starch loving that unites all food lovers. The only vegetable that our group of Bengalis and a Parsi always approved of.

Three portions of chilli fry with bread, along with Banu’s shammi kebabs kept us going till dinner at 2.30 am 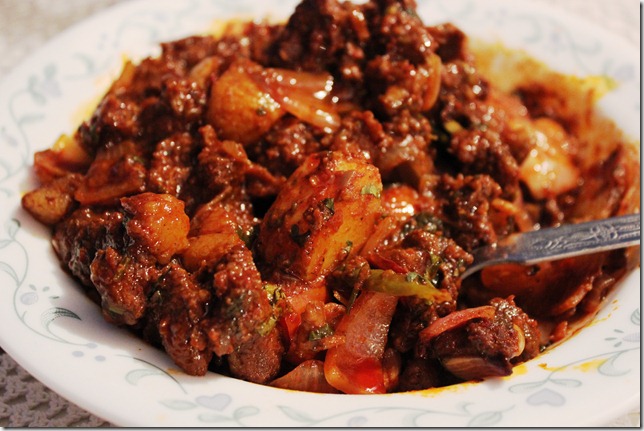 The vindaloos were the stars of dinner. I am not a big vindaloo fan so had ordered only one portion of pork vindaloo. The meat cubes were so rich, good …. gave in lovingly with each bite… soft pillowy bites of sheer pleasure… and the curry…tangy, hint of sweet, burst of freshness…it was almost as if the breeze from the Arabian Sea of Goa drifted in and refreshed us at that late hour. 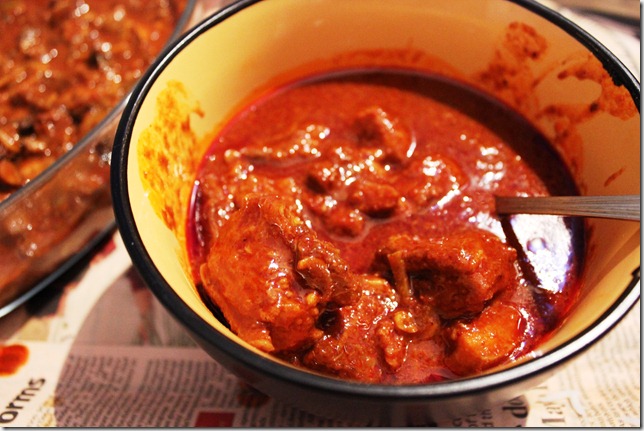 We called for one ‘veg’ vindaloo. Chicken that is for the soon to be mother in our group. Even that was so good…a group of people who look at chicken disdainfully and dub it as medicine…sneaked bites of the tender meat and joyous gravy….that night. 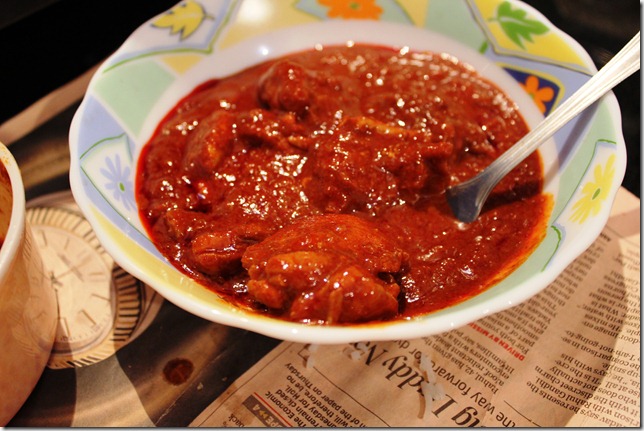 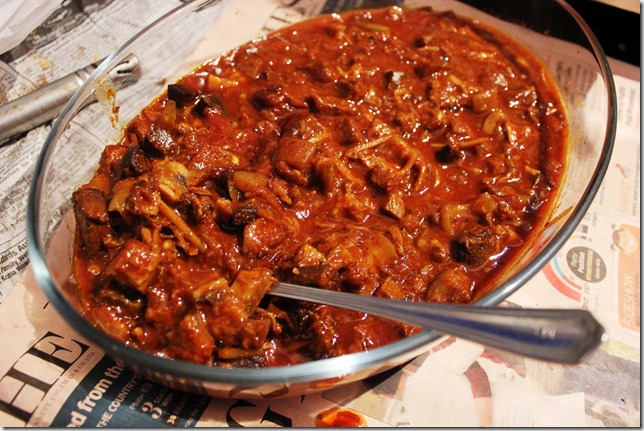 There was the sorpatel too. Finely chopped pork belly and innards, cooked in a sauce which is traditionally seasoned with pig’s blood … the taste always more woody,  more deep in comparison to the redder and tangier vindaloo…the quality of the meat once again celestial, juliennes of ginger giving it bites of sharpness… though as a dish I think the vindaloo overshadowed the sorpatel that night. In my experience sorpatel is a bit like Rahul Dravid who retired from test cricket today. Always consistent. Never fails. Vindaloo on the other has a bit of a Sehwag around it. On a good day blows away all around him. On a bad day ….

With all of us satiated with our fill of pork I can now sit down and share my secret source to the Goan pork stash at Bandra Gymkhana.

And in case you are wondering, each individual dish costs around Rs 160-180 (3.5 USD). You can have any of this with local ladi pao of Mumbai’s vada pao fame. Or with sanas. The Goan fermented bread which looks like idlis. The sorpatel and vindaloo go well with steamed rice too. That night we had a mix of pao and rice,

Next day I went across to Ainsley’s to compliment Anthony on the superb dinner.

Anthony broke into a big smile and said “Glad you liked it. I went to the Gym myself and got the Goan chef to cook it. I told him don’t make the East Indian stuff. My customer has to be happy…and the vindaloo pieces were leg pieces.”

All this while the avuncular gentleman was sending one of his attendants to buy a small chocolate. A family had come to grab a bite. There was a tiny little girl with them. I guess this was Anthony’s treat for her.

Yes, this is the sort of place I’d like to give my business to.

Caveat: None of us that night were Goan, East Indian or Mangalorean… not the ultimate judge on the taste…but if we were we wouldn’t have to call in for this feast would we? 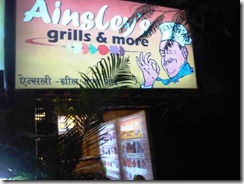 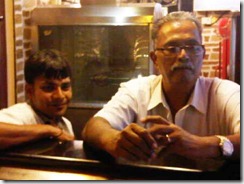 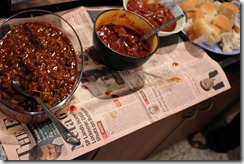 Home Cooked Oriya Food said…
Would love to try these dishes too... Looks like a feast to me!
Love the comparison with Rahul Dravid - gets the point across!
11 March 2012 at 06:50

Anonymous said…
Hi,
Love your blog, just wanted to point out that sometimes the links to earlier posts ( You may also like) do not work. For example the links on this post are not working.
12 March 2012 at 12:25