on March 26, 2012
The thing with South East Asian broths – the laksas, khow sueys, tom yums, phos and even the Tibetan thupkas – is that they have to be served hot. Piping hot. So hot that you have to wait patiently before you can plunge into your bowl of gastronomical pleasure and nourishment.

A chat on twitter with Sandip Ghosh on this made me think about why this is so. Sandip said:

‏ @SandipGhose : @Finelychopped Very correct.We certainly don't have an Asian version of Gazpacho - or do we ? The reason is the weather

And this was my take on it

The conversation was sparked off by the curry laksa that I had last evening at Tasty Tangles, Bandra. It was a rather hot evening and I that a laksa or a thupka would be a good dinner option. I remembered that Tasty Tangles did a good version of laksa and headed there.

At tasty Tangles I discovered that they had a small portion at Rs 199. Which was a good deal as I earlier felt that going to a chic restaurant for a regular dinner was an overkill.

The problem was that they served the laksa lukewarm!

Two sips and I sent it back for reheating. I assume that they did so in the micro. So you had an unevenly heated laksa which lost steam halfway through and was cold again.

Which was rather sad considering that barring the ungainly film of oil on top (which Nandita pointed out when she saw the twitpic ‏ @saffrontrail :@Finelychopped looks very greasy to me :| ) the rest of the laksa was good. The flavours robust and authentic. The prawns fresh and cooked just right. The customary fried taufu adding to a sense of pleasant reality.

It’s just that it wasn’t hot. 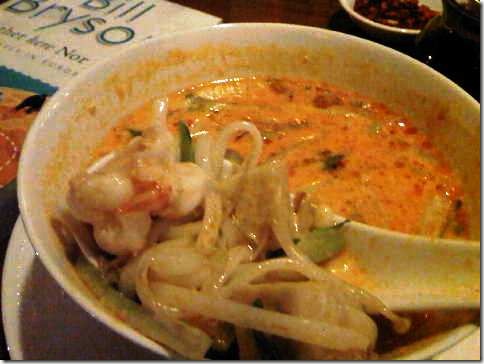 On the way out I went and  spoke to the manager and they chef about this. I hope they fix it as Tasty Tangles is one of the better Asian options around. And while they are at it I hope they remember to serve the chilli paste on the side with the laksa. This is de rigeur. And give sprouts on the side. They have it in the open kitchen. And not masala peanuts for heaven’s sake.