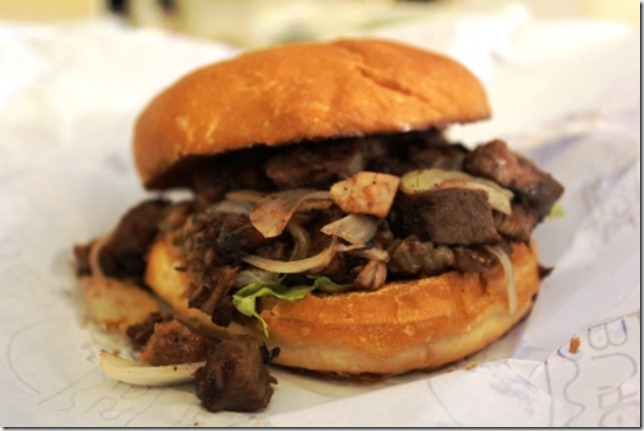 I placed my order and came and sat down at one of the functional white tables. I took out my camera and was checking out some of the features when I heard a voice from across the table.

“Wow what a camera? …What? You don’t like to take photos”.

These were two young boys talking with each other. One of them, the one talking about the camera, suddenly got up and came to me with a big smile.

Sahil, as I later learnt. An 8th standard school student.

“ This is such a cool camera. What model is this?”

Which is when my order number flashed on the screen and I didn’t have to disappoint young Sahil by coming across as someone who was wasting a camera without even knowing the specs.

I returned to the table with my order of a ‘Notorious Pork Burger” and, for some reason, a green salad.

I was at Burgs. A new burger place opposite National College on Linking Road, Bandra. I spotted it the previous evening while I was headed to Tasty Tangles for laksa. The promise of the char siu pork burger drew me back the next day. 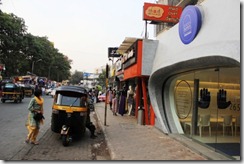 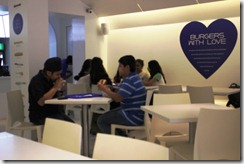 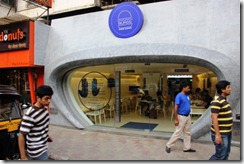 I placed the burger on the table and began to take a few clicks with the camera.

“You know he must be a food blogger or a journalist. A food blogger I am sure. That’s why he is taking photographs of the food. He will put it on the internet”.

Young Sahil continued to educate his rather quiet friend.

I looked up and saw Sahil craning his neck looking at me and the camera.

I smiled at him and called out, “Want to come over and see the pictures?”

Sahil was standing beside me by the time I finished calling out to him. Sahil saw my frames. My usual style is to go for close ups, focus just on the food and specially the meat.

Sahil shook his head slowly and said “why don’t you take a shot where the burger, salad and the dip are all there?”.

“Well I wanted to focus on the meat but why don’t you show me what you had in mind.”

We both peered into the screen as I framed the picture to his specs. I went for a slightly tilted angle and clicked.

Sahil looked at me indulgently.

In retrospect it was such a bad picture that I don’t even want to put it up here.

Sahil jumped up at the offer and grabbed the camera. He then studiously framed and got his perfect shot. He smiled. Finally happy. 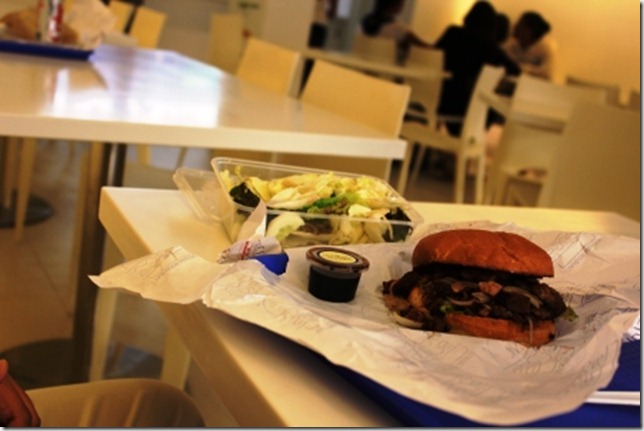 Before he headed back to his abandoned friend I got Sahil to pose for the post by the burger.

“But I am vegetarian”.

“That’s ok just hold the bottle of balsamic. We will pretend that you are art directing the shot.

So if any of Sahil’s elders are reading this,  for the record he didn’t touch the meat. 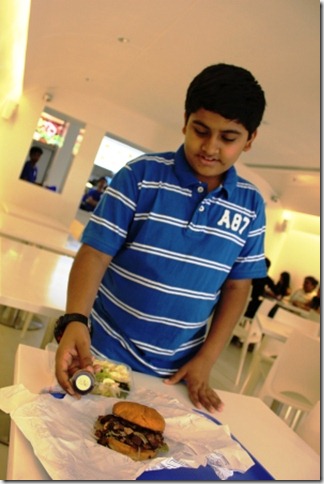 Talking of the meat I turned to my burger after a taking a few more photos. I was worried that the burger would have gone cold. I took my first tentative bite, it was still warm.

Incredibly enough it was just the first bite and yet suddenly everything begun to change around me. It no longer seemed like Monday. This was sheer exhilaration. Exhilaration of the “all my troubles seemed so far away” variety.

This was the ‘Notorious Pork Burger"’. And what an esteemed pig it was. Chubby, cuddly meat. The char siu seasoning perfect. An Oriental caramelised sugar based sauce…normally a tad sweeter at places such as Singapore…they had got the taste balance just right at Burgs. There was a spring to the meat which combined well with the crunch and texture of sweet fried onions. The bun…fresh…providing the perfect canvas to showcase the lovely pork in its naked glory.

This was the most glorious meat experience that I have had in a long long time. 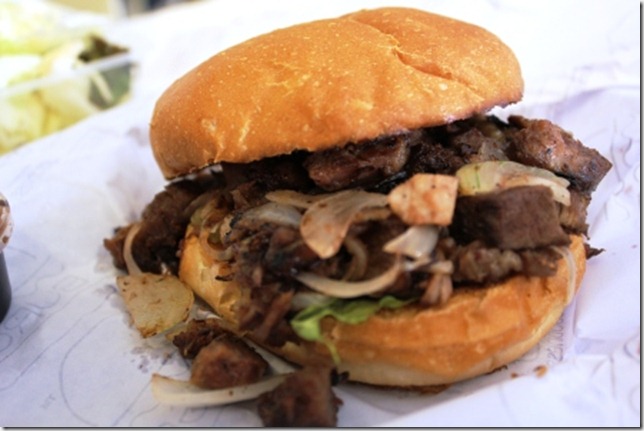 Oh, and the salad was …uh..nice. Packed half of it and had it for dinner with grilled chicken.

In between the two meals I watched the movie Agent Vinod where the only good thing were the exceptionally good A1 samosas at Globus. I guess they took pity on us suckers who bought tickets to watch the movie.

I’ve not tried the rest of the menu there but fellow Bong, @supramario  on twitter, praised the tenderloin burgers at Burg 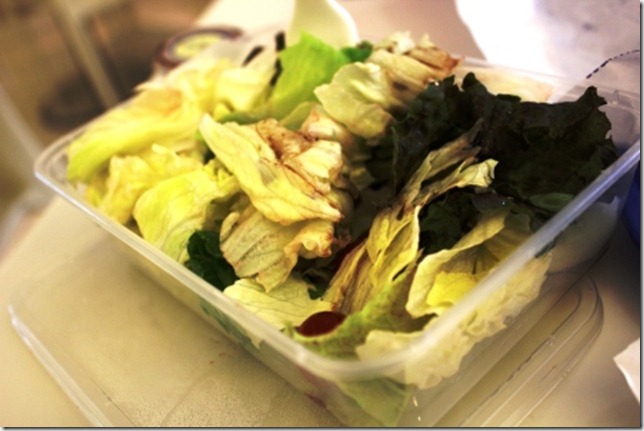 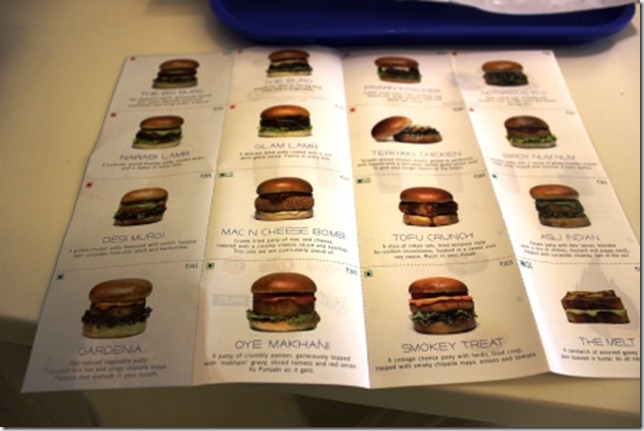 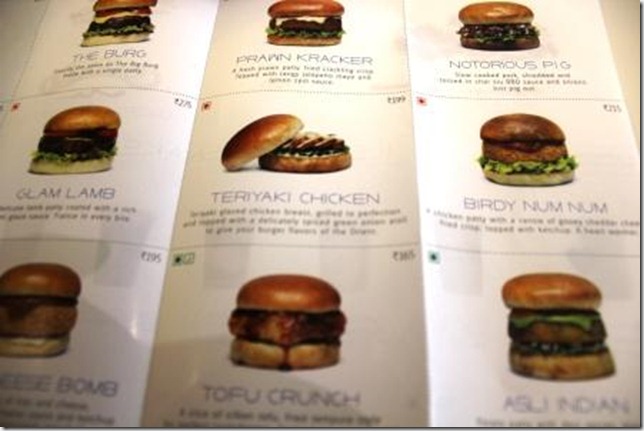 Gobri said…
Nice. I would love to try this burger being a fan of both char siew pork and burgers.

About the photographs... with your regular framing, you should get yourself the f1.8 50mm fixed lens. Takes good pictures even in low lighting conditions and not very expensive.
28 March 2012 at 06:27

Home Cooked Oriya Food said…
haha -- loved that conversation with the kid! This post had dialogues with the interested/knowledgeable kid - different style! Good one!
28 March 2012 at 08:01

Kalyan Karmakar said…
thanks for the tip @Gobri...still recovering from the amount I paid for the camera...once I catch my breath I guess

@Thebride...didn't even notice there were leaves on the salad till now :\

Kalyan Karmakar said…
that's sad J. Their other burgers have had mixed reviews but the pork burger had worked for two other friends of mine too....hope they get their act sorted
20 April 2012 at 00:17

PoppadumArt said…
I had a terrible experience at Burgs. Absolutely the WORST customer service experience ever. They refused to remove two slices of tomato (which I'm allergic to) from my burger, saying: "It's company policy, we cannot change our recipe." Full story here: http://www.keyboardandink.com/2012/05/burgs-mumbai-worst-customer-service.html No way in hell I'm going back.
6 May 2012 at 13:52

Unknown said…
We had been to Burgs around a couple of months ago, What a bad experience! We called for the birdy num num which was pathetic the worst of the lot, the pork burger was a bit sweet but the meat was tender. Not bad i thought to myself but the portions are too little for the price to pay. Quality and Service need improvement too
19 November 2012 at 12:04