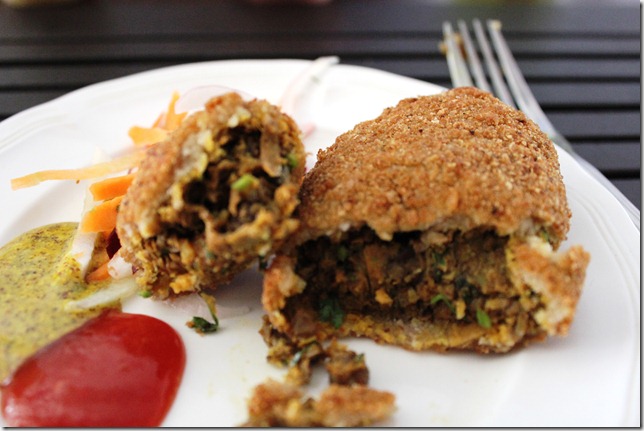 What you won’t realise is that this fairly tasty mochar (banana flowers) chop had a strand of hair in it.

Replaced immediately by the staff when I pointed it out. The chop not the hair. 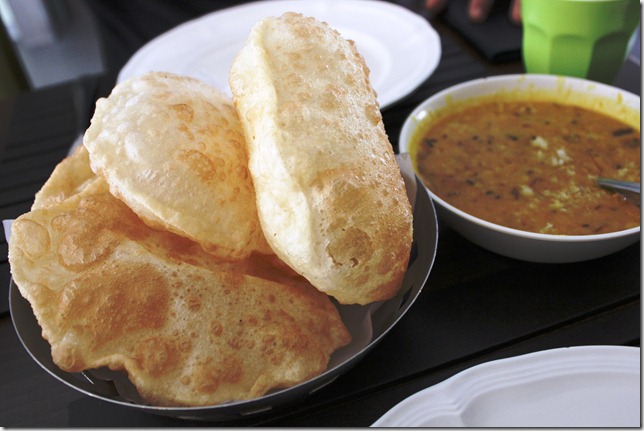 That while the luchis were good and the daal fragrant with ghee, the latter was under-salted. 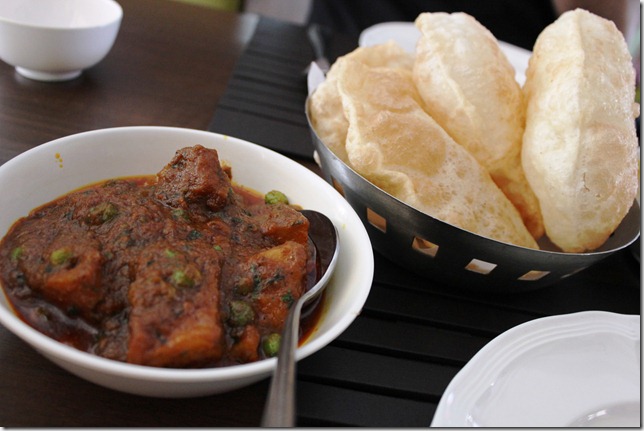 And no, alur dom shouldn’t have koraishuti. Or peas for the uninitiated. 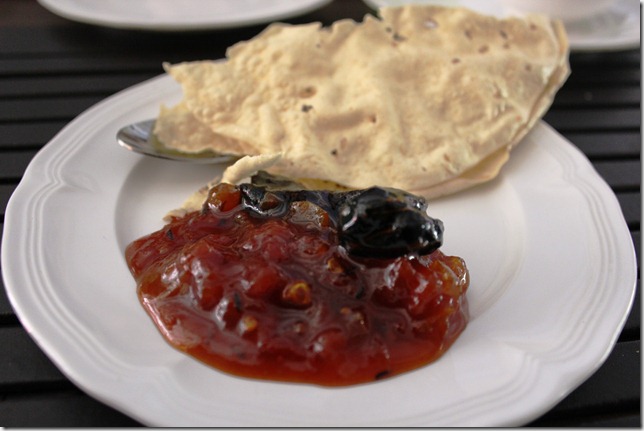 And that the tomato khejur and aamshoktor chaatni had only tomatoes. Worse still. Was served ice cold. Seemed wrong.

And then there was the malpua…heated so much in the micro that it was shrouded in steam when the waiter got it to our table … and promptly disintegrated while serving. I didn’t even bother photographing it.

Pity had to happen on a day when I finally took my friend, who became a proud father just two days back, for a long promised Bengali vegetarian meal.

I must have had at least five great meals at Bijoli Grill Powai if not more. I am sure that this was a rare bad day.

Should Bong tomato chutneys be served cold in restaurants? Like fridge cold?

In reply to Kalyan Karmakar

Home Cooked Oriya Food said…
haha! loved the rant!
Hopefully you have better experience for your friend next time...
7 March 2012 at 07:28

Kurush F Dalal said…
musta been havin a bad day had two superb meals there (after reading you initial recco) .... but then perhaps the emphasis is on the non veg here and they simply screw up the veggies ...??
7 March 2012 at 09:08

Kalyan Karmakar said…
@Somoo (home cooked) I hope i do...Bijoli Grill is my only hope for a good lunch in that area

Ankan said…
So the chope chool story is actually correct :p Sad that this happened when you took your friend out. Had i been there with a few fellow Calcuttans, this would have made me feel more at home :) Jokes apart, the pictures just keep getting better! Is it the Canon. Noticed the white borders around the pictures with the shadow - adding a nice depth.
7 March 2012 at 14:26

Jaya M said…
Hi Kalyan..
Well may be one bad day for the staff at the kitchen..I am sure after this they will have a parade LOL..
and well came here to inform you about a copycat site..many images are copied..I have mine also..and Sharmila says your image of golda chingri post is proudly being displayed as his/her work..have a look --http://bengalirecipes.net/...
have put up a link in FB..

Unknown said…
I understand home cooks having bad days. But restaurants having a bad day with most of their dishes? Unacceptable.

P.S. I do add koraishurti to my alur dom during winters. And my tomator chaatney is always slightly cold. Else, all other Bong chaatney is room temp.
7 March 2012 at 18:55

Meenakshi said…
I HATE when I find stray hair in restaurant food. Gives me the heebie-jeebies! My husband and I have had a few meals at Bijoli Grill, and they were quite nice. Like you said, must have been an off-day.
8 March 2012 at 13:48

WeekendFarmer said…
Nice! Got so hungry. Just ate daal and karela baji for lunch. My American co-workers were wondering what I was eating : ).

Kalyan Karmakar said…
@Ankan...thanks, yes it is the canon...still getting to know it...just wish it wasn't so bulky...dropped the transfer wire from the clumsy bag the other day

@Jaya: thanks and hppy holi to you too...I saw the site...it is not even a golda chingri

@Meenakshee: I sure hope so

whenharrymetcelery said…
I'm going to visit this place real soon. I hope they don't screw it up my first ever vegetarian Bengali food experience.
12 March 2012 at 16:44