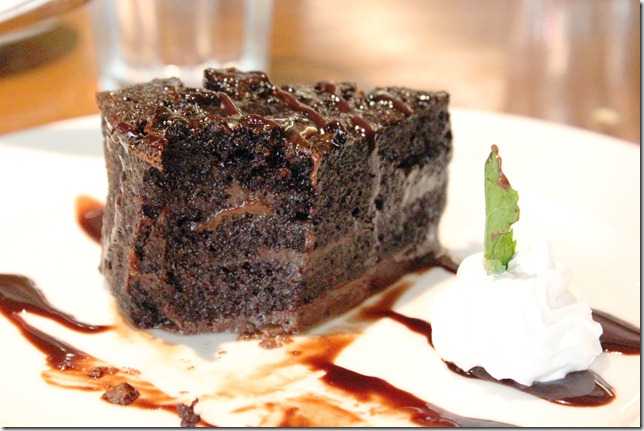 When the restaurant in question is just next door and is the part of a franchise one is fond of then you had a restaurant event invite you just couldn’t say no to.

I went to the preview of the Indigo Deli that’s opening at Bandra’s Pali Naka this Sunday.

Four hours of conversation with some interesting folks including the iconic restaurateur & owner of Indigo Deli, Rahul Akerkar. Dishes ordered from a long menu. A few hits and the odd miss. If a Sunday is going to be one of discoveries then this was a good one. 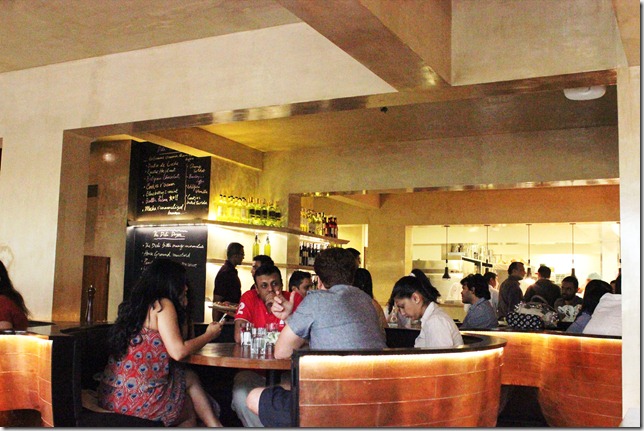 The first thing that struck me when I entered the new Indigo Deli was its roomy airiness. Very different from the Indigo Deli at Palladium. The design at Bandra uses large glass windows to pool in the sunlight creating an ambience that is cheerful and yet cosy. The fact that one sat on for so long is testimony to the comfortable vibe of the place. It really does grown on you and it is one of the warmest restaurant settings that I have come across recently. Mumbai has seen the opening of a spate of ‘good looking’ restaurants but there was a certain understated elegance about the Indigo Deli at Bandra which seems to capture the relaxed mood of this suburb just right.

This was not a set meal sort of event so one ordered from the menu. I asked for recommendations too.

The watermelon capprioshka that they were serving was just what one needed in a sunny afternoon. The soothing taste of the chunks of the watermelon made this such a wonderful summer drink. I wasn’t surprised when I saw Akerkar himself grab one when he walked in to the restaurant.

It was good to know that Indigo will open at 9 am and yet serve breakfast though the day. Finally an option to have waffles and eggs without being spanked by restaurant owners for being bad children by waking up after noon on holidays.

Talking of breakfasts I tried another of the recommendations. I asked for a small portion of ‘eggs on the beach’. Cheese on poached egg on bacon on crab cake. An inspired take on egg benedicts with a texture and taste combination which lingered till long. Conceptualised perfectly right up to the point when the rivulets of runny egg yolk streamed on to the roesti on the side. This was sheer indulgence bordering on raciness. A breakfast that would signal the start of a very adult day.

Featured on every newspaper and portal announcements of the launch. The folks at Indigo Deli are rightfully proud of their creation. 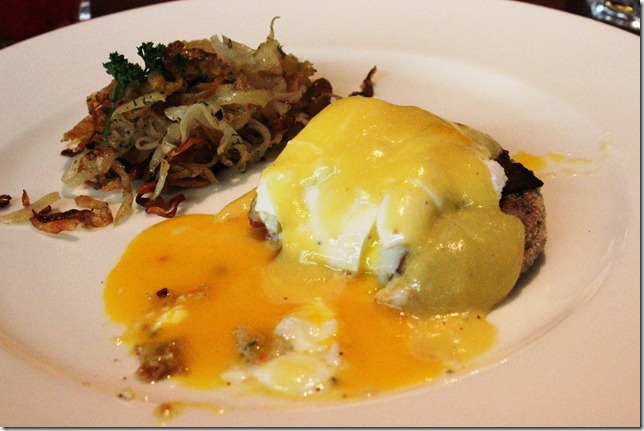 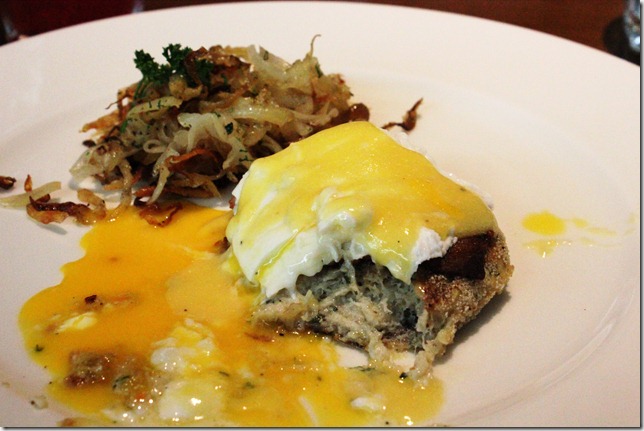 The other recommendation which I got, crispy carbonara pizza, would work for you if you like really crisp thin crust pizzas.

I don’t like biscuity pizzas though and proceeded to demonstrate what’s an ideal thin crust pizza in my world to those at the table.

“Hold it at 180 degrees and see if the slice bends by itself to a curved ninety degrees'”.

So far I’ve only come across Prego at Westin getting it right. Keep scrolling down this link to see what I mean.

The crispy pizza base, the runny carbonara sauce and the odd bits of bacon just didn’t come together for me.

I was at a largely vegetarian table with food blogger When Harry Met Celery, ordering the vegetarian stuff.

There was a brownie milk shake which was as good as she insisted it was, a salad (no alcohol dressings, no non veg) with an interesting dressing of the fantastic house mustard of Indigo and a tofu and mushroom burger. The colourful vegetarian pizza was on the soggy side and again with that wafer crisp crust. The Indigo pizzas just don’t work for me.

We were almost done when I decided to try out the risotto. I’ve rarely come across a risotto that I like but I still keep trying. A meal one wasn’t paying for seemed to be a good bet and I asked for a wild mushrooms with red wine risotto.

I was a bit surprised when the purple coloured risotto was brought to our table. Different from the white or creamy ones that one is used to.

I took a bite and then did a double take. This was not the usual stodgy dish that one is resigned to expect while ordering risottos. The wild mushroom risotto at Indigo Deli was buzzing with flavours and had a fresh spring to each bite. It was one of those dishes which was of the ‘put the fork down after every few bites …and then pick the fork up again and continue’ varieties.

I kept digging into the risotto. Hypnotised.

And it didn’t even have any meat in it. That’s how good the risotto was.

I don’t know whether it was the light texture of the rice, the headiness of the wine, the regal purple hue or the vintage parmesan but to me the wild mushroom risotto was the dish of the afternoon.

The house ice creams seemed a good idea on a hot afternoon. An Intensely deep dark chocolate one and a mocha and caramelised banana ice cream which had a balance of kiddy and grown up flavours. 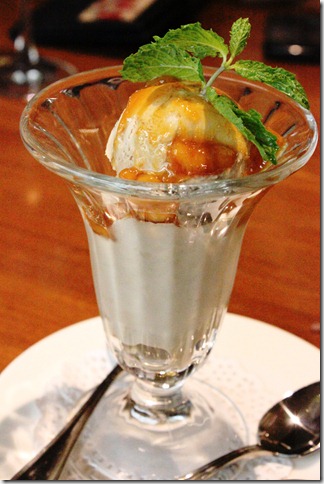 But the dessert which really brought me to my knees was the chocolate bread pudding strongly recommended by Deepti of Indigo.
Like the risotto and the ‘eggs on the beach’ earlier, this too was one of those ‘take a bite and then don’t stop’ dishes.

There was something so welcoming about the chocolate drenched bread pudding that just made you want to cuddle up on its lap and lie down.

If ‘just a lil bit of the Human Touch ’ is what you are looking for then chocolate bread pudding at Indigo Deli is what you should go for.

Accompanied by another of Deepti’s recos, the incredibly crisp Araku coffee. 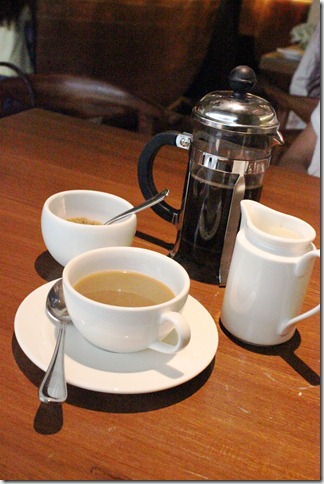 Rahul joined us for a bit and we chatted off the record on the food scene at Mumbai. I was interested to hear his views on plating - ‘we need to move with the times but don’t want to lose harmony…can’t get too obsessed with it…and yet have to be contemporary’ (paraphrased).

For me the endearing story was that of little Rahul Akerkar sitting in his late aaee’s (grandmother’s) kitchen during summer holidays observing what she cooked. These lazy afternoons had an influence on the course Akerkar's life took as he eventually became one of Mumbai’s most talked about restaurateurs.

So welcome to the hood Indigo Deli.

Saee Koranne-Khandekar said…
I love the food at Indigo Deli. Their salads are always crisp and fresh, their sandwiches always wholesome and desserts usually perfect. Your post made me want to go there and eat. I'd have loved to meet Rahul Akerkar; I think he's one of the most talented chefs in Mumbai. Also, I see the photography improving--your compositions here are really nice today--looks like that class really helped!
23 April 2012 at 18:40

Sassy Fork said…
Wild Mushroom Risotto has been one of my favorites!! Don't like ultra thin pizzas much either.
This seems a really warm place....gotta visit!
23 April 2012 at 21:41

Kalyan Karmakar said…
thanks Saee. Yes the class made me more aware of my camera and it helped though I am far from utilising it to its full potential. Plus I rarely get ideal light and space to shoot as lot of my cooking is at night and restaurant shots are in between real life meals
23 April 2012 at 22:15

Trishnanta said…
Brilliantly written. I always get amazed at your choice of words, your witty descriptions. Thoroughly enjoyed the review and ofcourse, that droolworthy shot of the chocolate bread pudding.
27 April 2012 at 22:17