In college we had learnt in our sociology lessons that is acceptable to have biases. The important thing is to table to them at the start of a report or study. Let the reader know of your biases.

I try to do that when I write.

So to start with I must admit that I rarely to go to Punjabi restaurants. Even lesser when one is spending a fare bit of money for a meal.

A case of familiarity breeds contempt I guess. One has had an overdose of North Indian Punjabi food when it comes to eating out. Punjabi restaurants don’t really excite me. Specially when outside of Punjab or Delhi.

Yes, I do call in for a bandore chicken and roomali roti from Khaane Khaas and Bandra. But that’s about it. I normally consider curries in Punjabi restaurants at Mumbai to be bad news. Sticking to the tandooris and tikkas, the black daal at the most is my strategy when it comes to Punjabi restaurants at Mumbai. And the odd sarson da saag in winter.

Which is why the opening of the legendary Jiggs Kalra’s Punjab Grill at Mumbai had left me cold. Punjab Grill has become the darling of food events and awards here since then but there was no way I was going to spend good money and go to a Punjabi restaurant. I didn’t expect Punjab Grill to be bad. Just not my cup of tea.

An occasion to go to the Punjab Grill at Juhu came up recently. I was meeting the boys of my first ever team at work for dinner. Punjab Grill was suggested because of the locational convenience. Plus Punjabi food is always a common denominator when it comes to group. So I agreed.

I reached Punjab Grill on Friday night. Slightly late. Punjab Grill had already engaged me on twitter after I tweeted that I was going there. A connect was made.

The Punjab Grill at Juhu is quite spacious by Mumbai’s standards. The ambience minimal yet classy. Not the usual overtly faux Punjabi look typical of Punjabi places. The place was packed. I spotted quite a few expats as well quite a few families. It seemed that sort of place.

The service friendly with the steward expressing a point of view when I asked him for suggestions. This I appreciate. I took some of his suggestions and disregarded some.

Oh, in case you didn’t know, when you are dining with me than it’s given that I place the order. Except for the two vegetarians in the group who in one corner quietly asked for some paneer tikkas and later mixed vegetables for themselves.

The menu at Punjab Grill is not particularly different from the average Punjabi restaurant. Most of the usual suspects were there….tandoori chicken, tikkas, butter chicken, rara, mutton, biryani etc…there was no attempt to ‘redefine’ Punjabi food. The attempt possibly just to package regular Punjabi fare in a sanitised form for those who didn’t want to get their hands dirty in dhaabas and small crowded restaurants. Yes, there was the odd tandoori broccoli, salmon and duck…but given that this was not a gourmand dinner one didn’t see the point in investing in these…and I firmly said no to the stewards attempt to sell us the raan. There was a morel pulao too but my dinner mates shrugged, said ‘mushroom biryani’, and declined it.

I skipped the Patiala pegs and went for a kesar lassi recommended by our steward. The flavour of saffron made the drink quite appealing, pleasantly cool in muggy Mumbai…the thickness and sweetness well balanced. 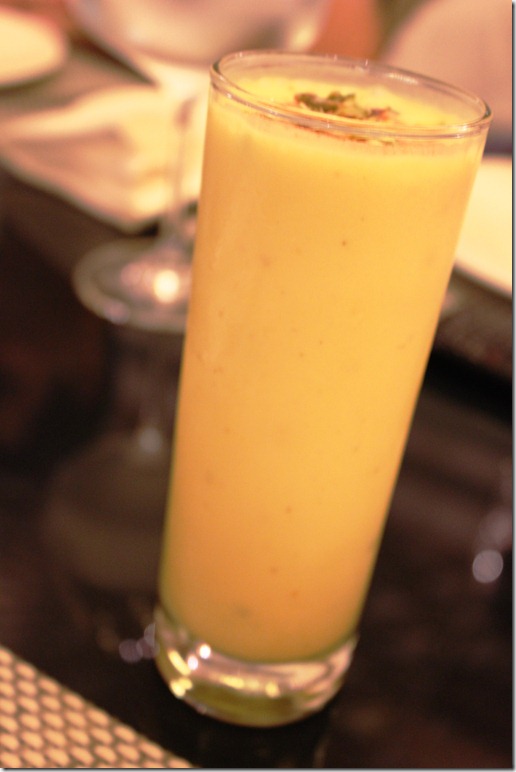 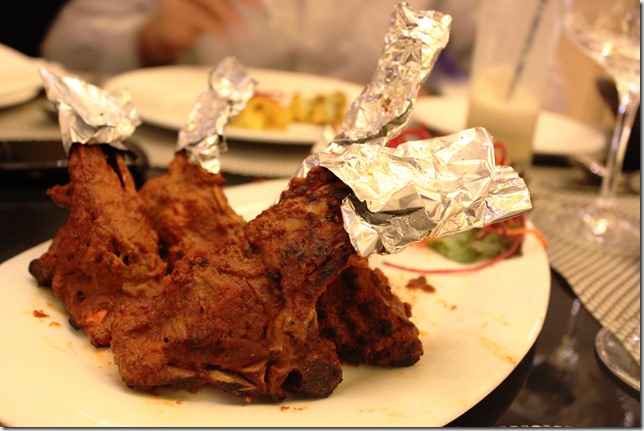 The other starter was some sort of paneer tikka with a green chutney marinade. I took a bite of the paneer. The marinade, like that of the chops, again quite delectable. The paneer per se was a bit hard though. Surely did injustice to the Punjabi ethos. You get such good quality paneer at Sindhi Punjabi shops of Bandra and Khar. If handled with care they can yield some fairly well flavoured dishes. The paneer at Punjab Grill erred on the side if being over cooked. Which was a pity given the elegant masala it had been dressed in. 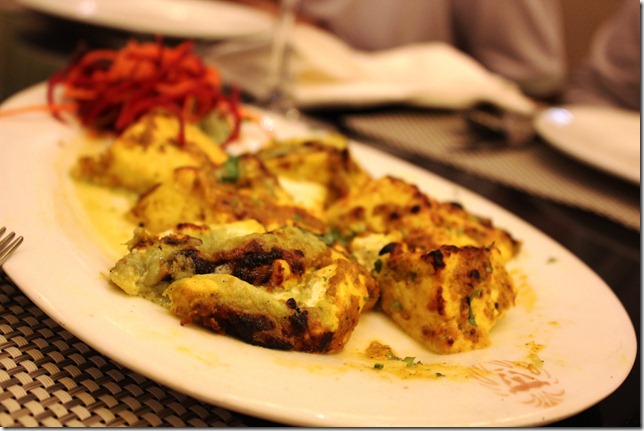 The main courses came and went largely in a blur.

I didn’t even bother trying out the mixed vegetables. They looked quite unappealing. And no, despite the premium pricing, none of the the food was really plated aesthetically.

The black daal that I ordered hit the spot. It was truly a work of art. The texture silken. The taste regal. A lovely mix of creamy fragrant spiced tender love. To me the black daal was really the stand out dish of the evening. Highly recommended. 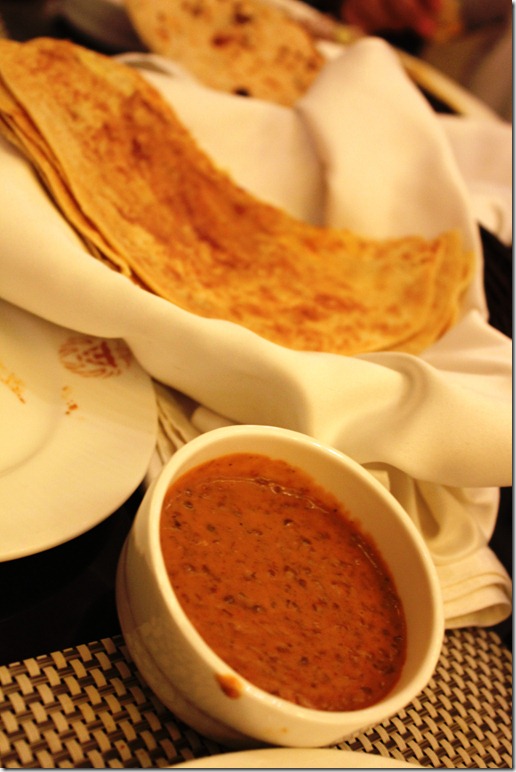 The rotis were buttery and we tried the safron ulta rumali rotis suggested by the steward. Rather heavy and cloying…possibly would pare better with a Lucknowi kakori kebab than heavy Punjabi curries.

We wanted a chicken curry and I wanted to try out the butter chicken. The steward insisted on the murg tikka labradar or “chicken teeka masala” instead.

The dish was marshy and swamp-like…un-dimensional, monochromatic…neither the curry not the meat were tempting enough to induce a second helping. A very unforgettable dish.

Tell you what, I have no recollection of how it tasted. 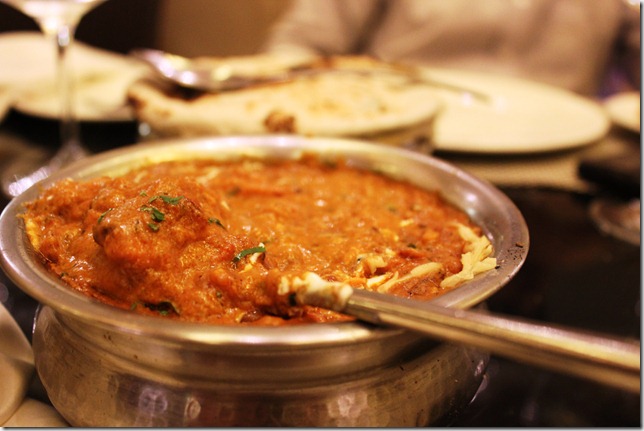 We wanted a biryani and went for a prawn biryani. The rice nice and firm. Seasoned with caramelised onions that seems to be the characteristic of Punjabi biryanis.

The prawns completely undistinguished though. As fresh as poor Dada’s batting these days. Think of those moments in the IPL this time when Ganguly lofts a spinner and the ball soars of yore….only to fall midway well before the boundary. That’s what the prawns in the biryani were.

Big, deceptively juicy looking. In reality a bit soft with no flavours of the prawn spreading to the biryani. 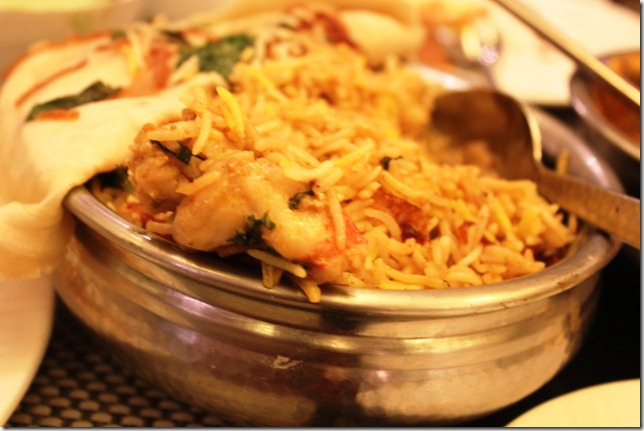 Like I said, only the daal was memorable in a meal which cost approximately Rs 1000 (20 USD) per head for the 5 of us with 2 local beers. But the company was good. The setting encouraged you to stretch and have a good time. The restaurant perhaps, a bit, as Pavan said and we agreed, ‘a bit overhyped’. 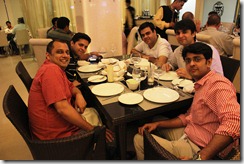 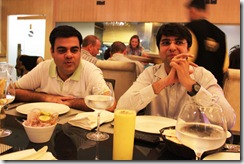 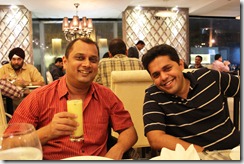 And yes we did have the complimentary paan shots at the end. A nice, milky and a pleasant farewell.

Not enough to define a restaurant though. 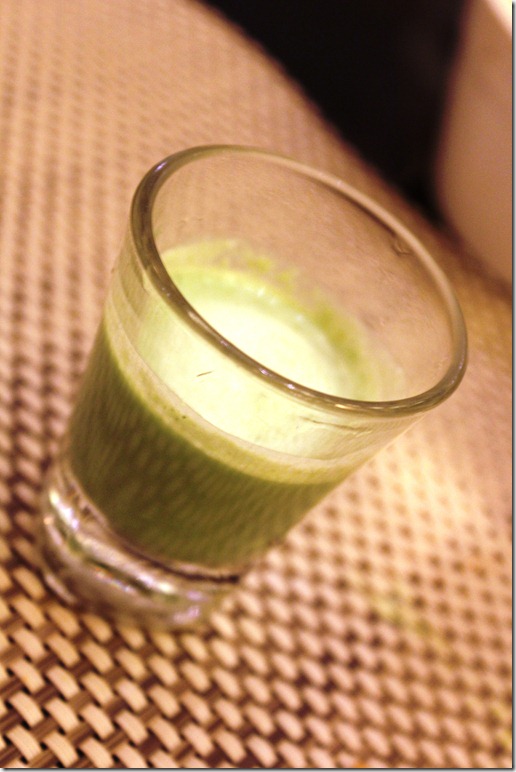 Note: wrote this piece on the fight from Mumbai to Lucknow on Indigo Airlines. Really impressed by the service, punctuality, the aircraft & the sandwiches. My first evening at Lucknow was head – alu tikki & mutter at Dixit at Chowk, dalmut tasting, chai on the house, hosted by stranger at the legendary Tunde Kebab at Chowk. Raja ki thandai at the end

Gaurav said…
havent been there in ages, their Paan Shot has shown up in a bunch of other places.

Vishakha said…
"Overhyped" was my conclusion as well when I tried the Punjab Grill in Bangalore about 6 months ago. I'd heard a lot about it after they launched it here in Singapore. We had the Salmon tikkas and the Salmon was stale! Had the sizzling Rum Gulaab Jamun. Sounded and looked so cool! Unfortunately, it was the biggest let down. The Gulaab Jamuns were so hard! Honestly, after trying the one in Bangalore, didn't feel the need to go to the one in Singapore.
15 May 2012 at 14:59