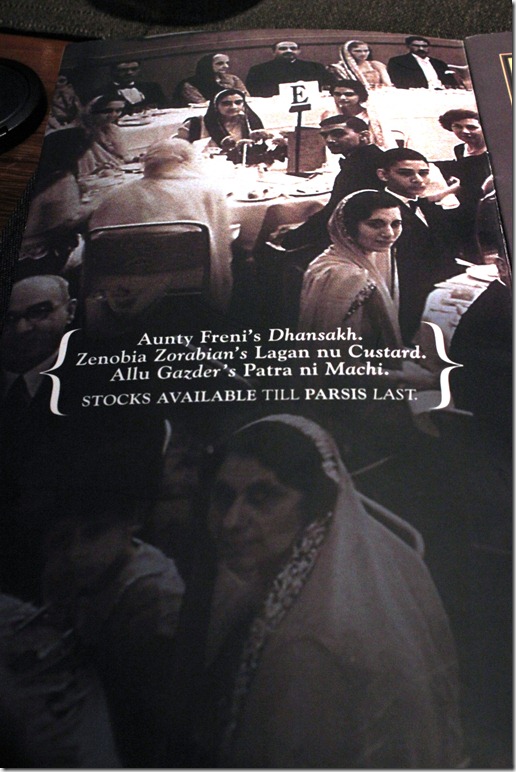 If you can’t make it to South Mumbai’s magical lands of Fort or Ballard Estate at lunch time, if eating in air-conditioned comfort matters to you, if plain walls and high ceilings don’t work for you during meals. Or sharing tables. Or orders being taken by the owners themselves…often octogenarians. If chipped plates put you off … or if nostalgia and history doesn't turn you on, if what you are always looking for is the ‘latest place to eat’ at then Jumjoji, the new Parsi eatery at Mumbai’s, Bandra Reclamation, will be perfect for you.
Jumjoji, which translates as ‘please eat’, has thrown open the gates of Parsi cuisine to those who do not go to the Irani cafes of old Mumbai or those who do not have access to Parsi wedding feasts or do not know of the Parsi caterers from whom they can order Parsi meals from.

Jumjoji demystifies Parsi food and makes it accessible to civilians.

What Jumjoji is not is a place like Bohemian at Calcutta which offers a fresh take on the traditional genre of food. It is more expensive than most Irani Cafes, barring perhaps Britannia. Unlike Britannia it is air conditioned but doesn’t have the magic of the latter starting with grand old Boman Kohinoor Irani who will take your order at Britannia and say ‘good boy’ or ‘good girl’ at the end and will refuse to give you the raspberry drink. ‘It is for the Parsis’ he will say and offer you lemonade instead to ‘beat the Mumbai heat’.
Jumjoji is more expensive than the traditional cafes but does not qualify as ‘fine dining’. The food is hardly plated. Their kitchens evidently bereft of squeeze bottles and blow torches required for the same. Jumjoji doesn’t have the plain walls of the Cafe Militaries or the Cafe Excelsiors. Unlike any of these restaurants, of Yazdani Cafe or Ideal Corner, Jumjoji didn’t have the traditional Irani Cafe owner sitting at the cash counter…lovely folks to chat with…normally fairly garrulous.

Jumjoji makes up for all of this with witty inscriptions on the walls, photos with stories printed on them and menu cards which tells tales of the colourful clan.

For someone who doesn’t want to hit the field and explore the lost world of Irani Cafes, Jumjoji offers a convenient look into the culinary culture of this fast depleting race.

The food at Jumjoji is a bit like that in most Irani restaurants, including the hallowed Britannia. Hit and miss. The two most consistently good places that I have come across in the genre is Ideal Corner at Fort with its daily changing menu and Mocambo with its lunch menu. The rest have their stars and the odd duds.

Jumjoji doesn’t really push the boundaries when it comes to Parsi cuisine. It doesn’t bring you dishes which you don’t find at average Irani Cafes. In fact, its menu is limited compared to even what exists in the traditional Parsi restaurants.

What Jumjoji does is that it takes most landmark Parsi dishes and presents just those to you. Which is not a bad strategy. Given that the Parsi cuisine is not very well known, beyond the basic dhansak, even at Mumbai. Specially since they don’t seem to have the sort of waiters at Jumjoji who can take you through the menu or explain the basic rules such as dunk the sali into the chicken curry for sali chicken and have it rotlis, the soft ghee infused Parsi chappatis. Oh but wait, they don’t serve rotlis at Jumjoji.

I went with Sue and Nathan part of the expanding clique of Finely Chopped Knights. I helped them navigate the menu and place the order. The advantage of there being three of us is that we could try a range of dishes.

We placed our order and had some of the sweet and tangy laganu achar (wedding pickle) as we waited. Pity the sago papads – saariyas – weren’t there. 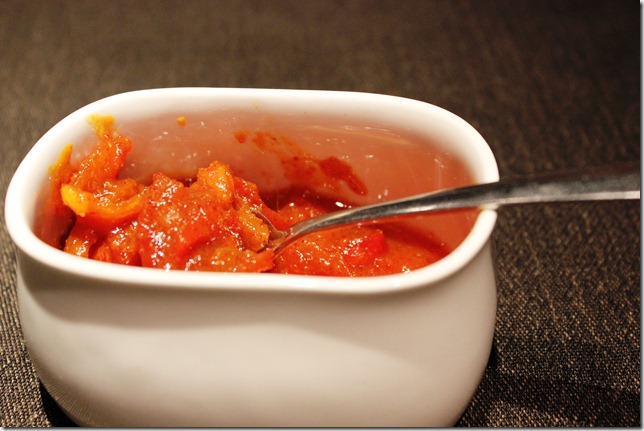 First came our akoori, or the spicy Parsi scrambled egg.

This was the only fish which had some attempt at ‘plating’ to it with slices of onions and an inexplicable slice of lime. The akuri was a bit of a damp squib, no pun intended. Its texture was semi-soft akin to Western scrambled eggs while it is actually meant to be tighter like an anda burji or local scrambled eggs. Akooris are also supposed to be pretty hot with loads of chilli. The akoori at Jumjoji was placid to the point of being boring. perhaps one should have bit on the green chilli. 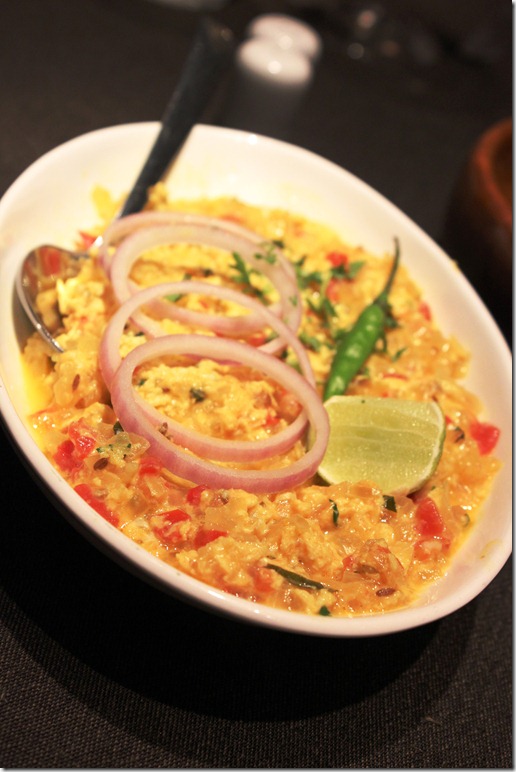 Next was the Parsi flagship dish of patrani machhi. Pomfret marinated in a coriander and coconut chutney and  steamed in banana leaves. The portion had one third of a small pomfret priced at upwards of Rs 450 ( 9 USD) which just didn’t make any sense even when compared to fish dishes at the upscale continental restaurants of Mumbai.

What made it worse was that the waiter broke the fish while taking it out to serve even though I was telling him that I would unwrap the fish myself. Not ‘fine dining’.

The taste of the fish was fairly inert as it often is even at Parsi weddings.  I have had Patrani machhis which are more flavourful and fresh and the one at Jumjoji didn’t measure up. 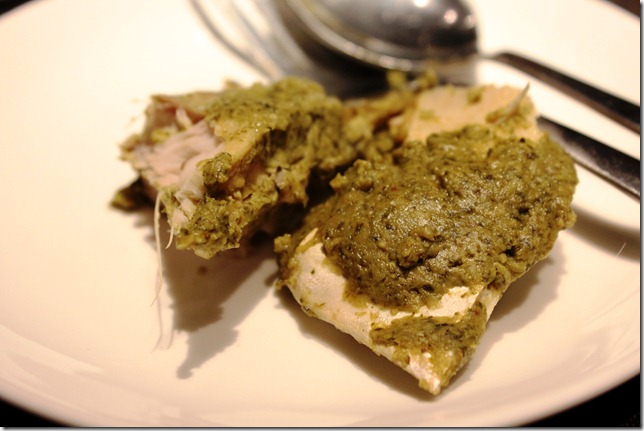 Thankfully the other two dishes that we ordered were a lot better. 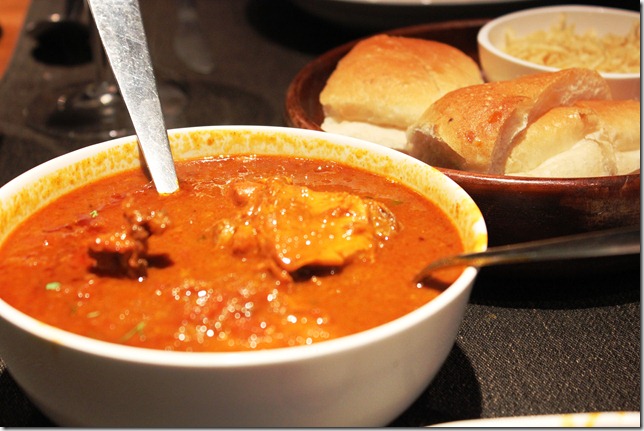 The curry in the sali chicken was quite well balanced. The consistency of the gravy pleasantly light…the sweetness of the jardaloo or figs just right and not over powering…complimenting the tanginess of the dish. The chicken could have been more tender but was acceptable. The sali chicken worked for both my experienced palate as well as that of Sue and Nathan who are not that experienced when it comes to Parsi food. They liked the dish in absolute terms. 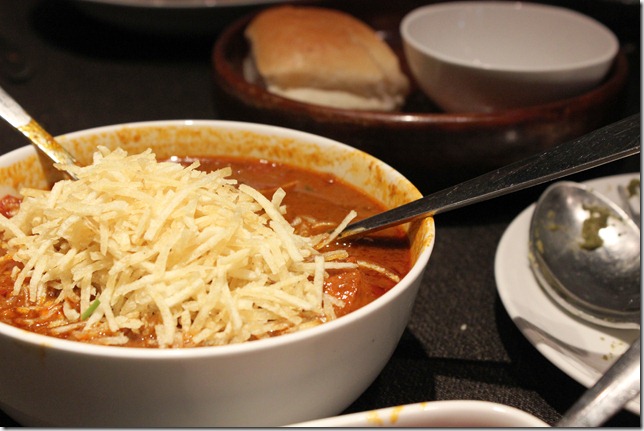 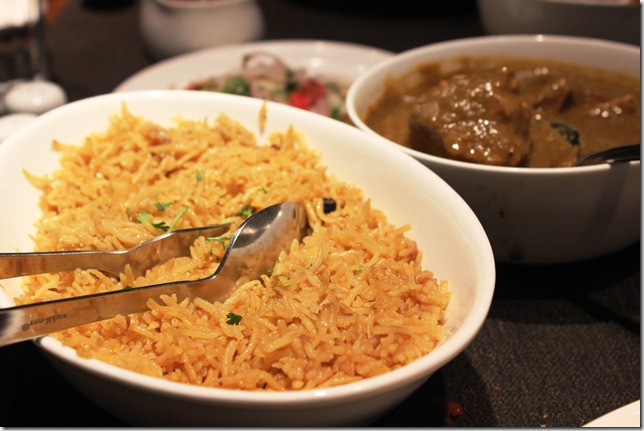 The rice in the mutton dhansak was too oily and bright in comparison to the usual caramelised rice. Reminded me of the rice at Excelsior Cafe.

The dhansak daal, on the other hand, was quite well flavoured. The taste was that of home-made dhansak. The colour too. Lighter than that of restaurant dhansak. The only thing was that the daal was thinner than that of the average dhansak. Frankly I don’t know what a true blooded Parsi would say about it but as an outsider I didn’t find the texture to be a deterrent.

What was disappointing were the tough pieces of mutton. Parsis pride themselves in their love for red meat and no self respecting Irani Cafe would serve such tough mutton. 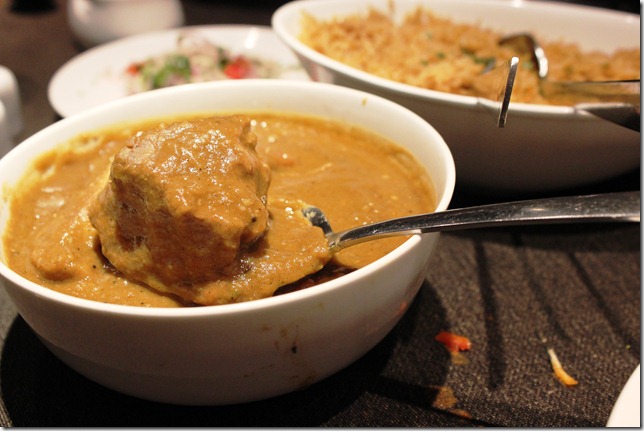 We finished our meal with laganu custard or wedding custard. A dish which is difficult to get right. As it happened at Jumjoji too. It was too sweet even for a Parsi custard, the texture not as tight as it should be with an infuriatingly strong essence of either cinnamon or synthetic vanilla which cut through.

And no, they didn’t have caramel custard if I remember right. 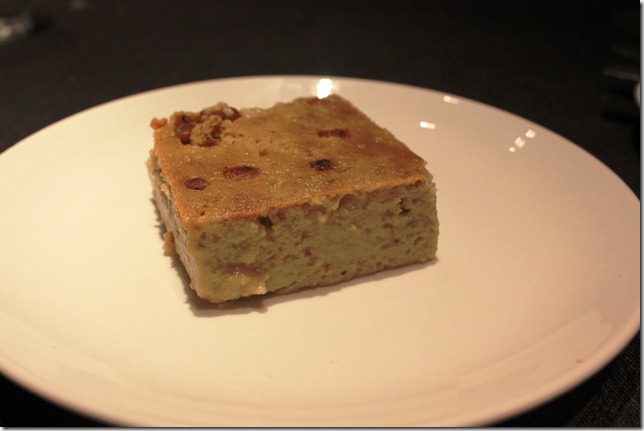 At the end of the day we had a pleasant afternoon. Were lucky to get a table. Weren’t rushed. The food didn’t set the house on fire but didn’t disappoint either. We didn’t get Parsi Sunday drink of beer but had wine and sangria like a Cusrowbaug Parsi would.

If you want a feel good meal and a cursory introduction to Parsi cuisine then Jumjoji is a place you can go to. As I said somewhere, Jumjoji is the Oh Calcutta of Parsi food.

But if history, colour, character, adventure and romance is what you are looking for then make the effort to get out of your comfort zone and head to the Irani Cafes of South Mumbai.

After all, to steal a line from the poster at Jumjoji, the cafes 'are available till Parsis last’. 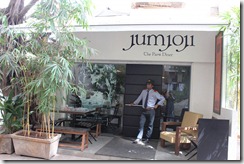 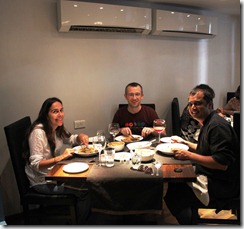 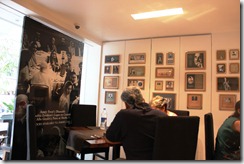 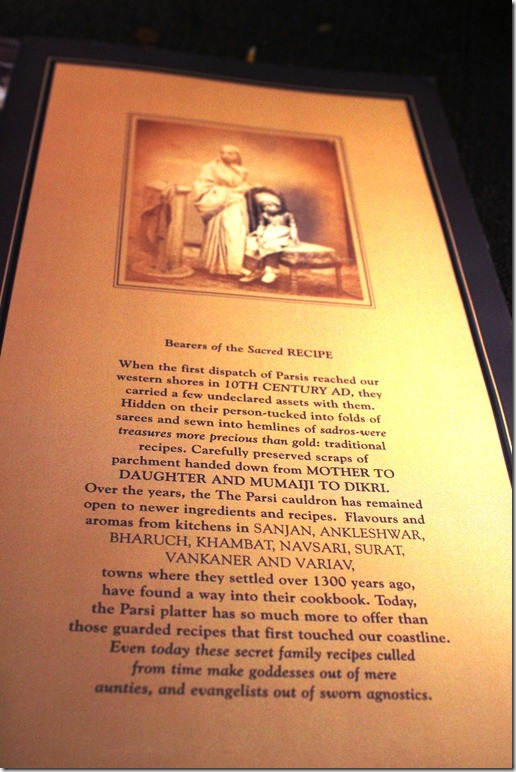 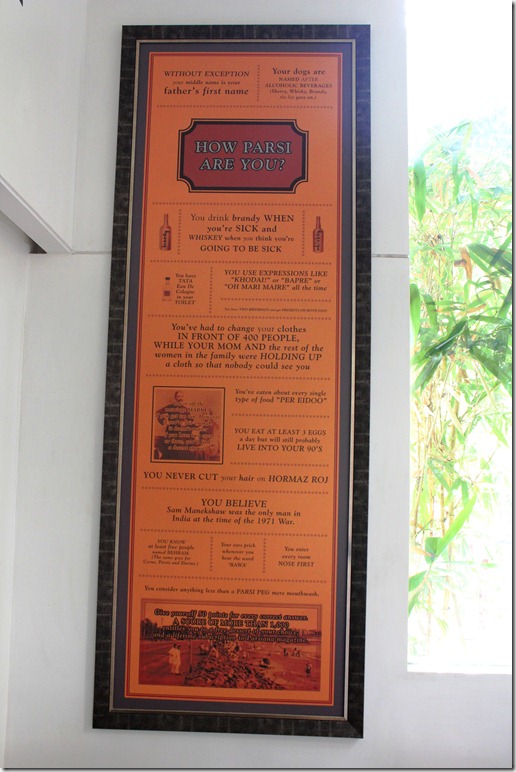 Sue_C said…
Yep - the sali chicken was definitely the highlight of the meal for me - the sweetness and sourness were there is equal proportions and really hit the spot! Tough mutton indeed, I had such trouble cutting into my piece that I was sure it was going to end up either in Kalyan's lap or away across the restaurant into someone else's!!
9 May 2012 at 14:06

Kalyan Karmakar said…
it was semi soft...i thought akooris were tighter...incidentally they had poras as well
9 May 2012 at 14:34