The team that eats together … Cafe Mangii, Khar 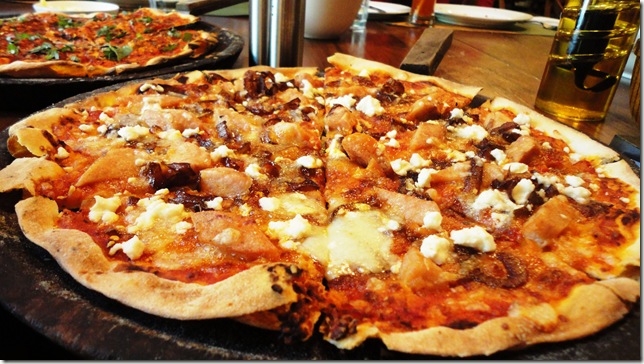 We were quite fond of Cafe Mangii at Khar. There was a certain intensity to the smartly plated continental fare that they served. The food consistent. A bit crowded though cozily done up, Cafe Mangii was a place that one remembered fondly.

Then it shut for a short while for renovation and opened for business post that. We had not been to the new Cafe Mangii.

Finally went there for a group lunch at work this week. I suggested the usual suspects…places with Chinese buffets for the lunch. Works best in social lunches if you ask me.

Then one of my team mates had an inspired suggestion… Cafe Mangii.

I was a bit sceptical about how an a la carte, and that too a continental plated place, would work for a group of people with mixed choices and dietary preferences. My protests were brushed aside. And I am happy to say that I was proved wrong. The lunch worked out to be perfect.

The first thing that struck as we entered Cafe Mangii that Monday afternoon was the sense of space. The place is twice as large as before. The decor has changed. Gone is the congested Parisian apartment look with its pillars and grandfather clocks and cupboards and posters. The place seemed more Mediterranean now, the walls clay hued – there was a sense of calm and serenity. It almost seemed like Women’s  Day as all the other diners were women. And at each table a typically Indian fight to take the bill was going on. One of my colleagues, the only other male customer there beside me, whispered to me that we should pass on our bill to them too.

All for world peace.

We were ravenous so ordered some garlic bread, which was burnt, and ice tea which was not mixed properly, while we waited. I got a bit nervous after the poor start but then the rest of the meal thankfully picked up. 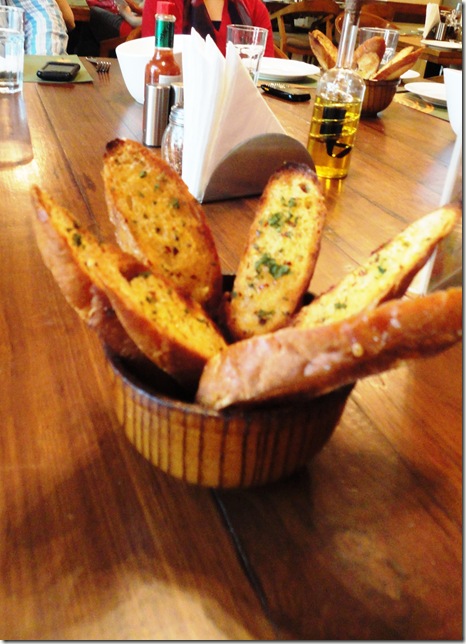 And here’s how the lunch worked for us despite it being at a plated a la carte place.

We split ourselves into two groups. Vegetarian and non vegetarian. One of the non veggies didn’t eat pork or beef which was a bit of a bother but we lived with it. There were about 4 to 5 people in each group. So we ordered 1 pizza, 1 risotto, 1 pasta for each party and a mains for the vegetarians who were slightly more in number.

We placed the plates in the middle so that I could shoot the food, I’d picked up a point and shoot from work, and then we served ourselves.

Ended up being quite a satisfying meal.

Cafe Mangii used to advertise their wood fired oven pizzas in the early days. They knew their strengths evidently. The pizza that we ordered was a delight. Passed my ‘bend test’. The crust bent to my approval when I held a slice at 180 degrees. We unanimously chose a great set of toppings. Caramelized onions, robust ‘Italian’ sausages made with a meat exotic to Italians from what I hear – chicken  - and chunks of sharp feta. The texture of the base and the symmetry of the diverse toppings combine perfectly. I took quite a few extra slices after the girls remembered their diets and didn’t finish it all. 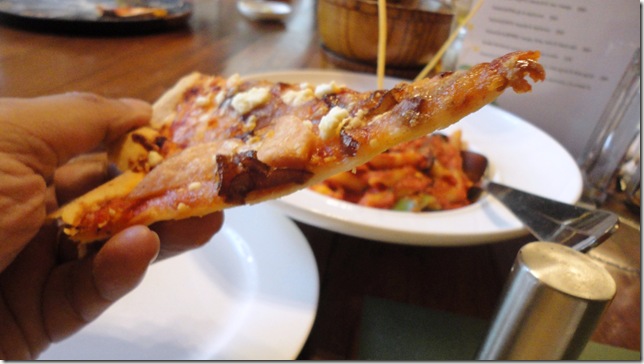 We had an animated discussion on how risottos with rice that is congealed do not work for us. The risottos at Cafe Mangii gave pleasure too. The texture just right. We all appreciated the bounce and airiness of the risottos. They hit the spot.

The vegetarian frommagio risotto was all about the loving, nurturing flavours of creamy cheese with mushrooms adding a pleasant contrast. We non vegetarians bullied our way into spoonfuls of the vegetarian risotto. Cheese wins over all. 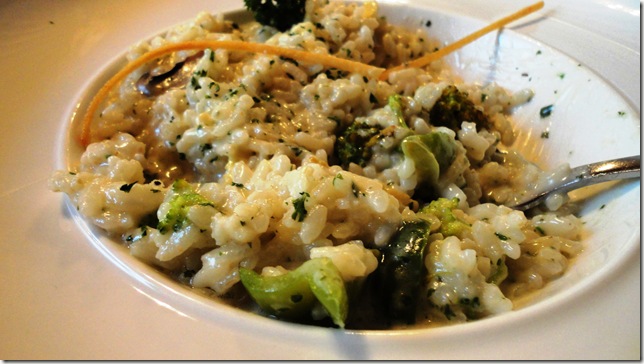 Our risotto was the seafood one with some pretty intoxicating flavours of prawns swirling through the risotto. They had possibly used red wine here and the flavours were again the sort that lingered with you like the memories of a pleasant crush. And as in an unfulfilled crush there was a sense of incompleteness to the dish. It was under salted. We all felt the lack of salt and had to correct it. 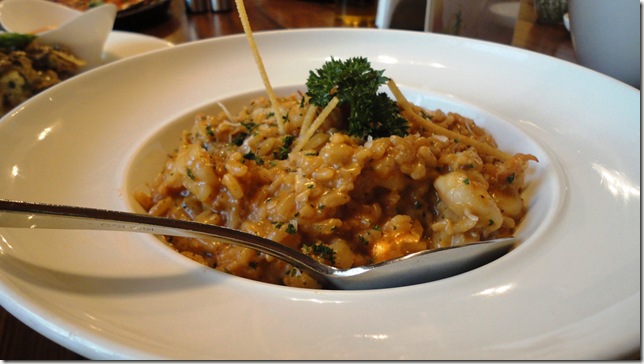 The non vegetarian Al Salmone spaghetti was cooked in a vodka sauce…though unlike the Spaghetti Kitchen one, this one didn’t have a tomato base. What made the dish stand out were the itsy bitsy bits of pink salmon which were nestled happily across the strands of spaghetti. This dish had salmon written all over it. Heady  and yet delicate. This was poetry in a plate. 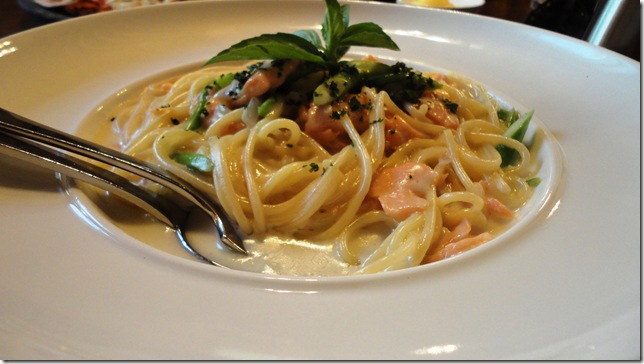 The vegetarian Sicilian pizza was an interesting contrast to the salmon pasta. Just as the vodka spaghetti, with its origin in post WW2 Naples as Chef Max once told me, was ephemeral, the Sicilian pasta from the South was robust and full blooded. It was made in a feisty Arrabiata where the intense flavours of pulped tomato seasoned with pepper lit up the afternoon. Not the usual ketchupy stuff that makes me so hate hate red sauce based pastas. This pasta had character. It had a spine. The the sort of dish one respects. 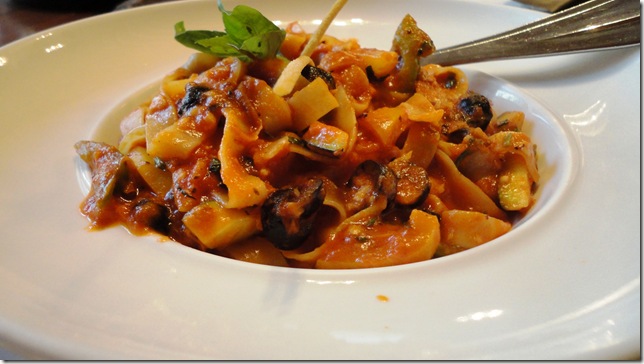 The vegetarians also went in for a dish which had couscous topped with a creamy mushroom sauce. It was initially plated with a strand of hair and we got the dish changed.

I personally like couscous in light Mediterranean salads so had an ideological disconnect with the dish. Though I must say  that I liked the creaminess of the mushrooms but just felt that it overpowered the couscous a bit. On the other hand the vegetarians, who did not share my couscous biases, really enjoyed the dish. 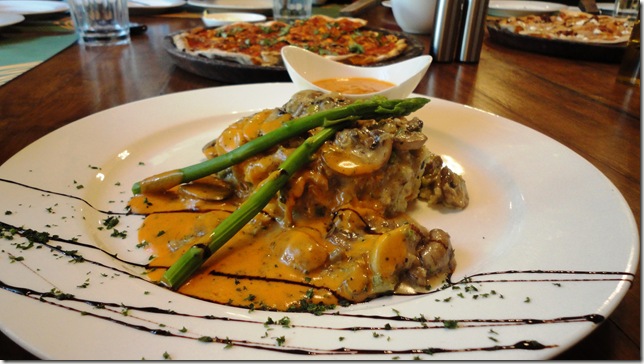 We skipped desserts as we were carrying a cake which we gave the folks at Mangii to cut. They probably gave it to a hurt pastry chef. The slices that were brought us were rather mangled.

Overall a good meal. The orders were harmonious. The corner relaxed.

After years of attendiing HR workshops on team building I’ve reached the conclusion that nothing works like a good meal together.

Left a bit of a sour taste when I went back and saw they had added 500 Rs extra in the credit card charge slip which I had to go back and get back..not a nice thing


Went back on a Friday night to Cafe Manggi Khar and frankly didn't enjoy the meal as much. Symptomatic of the inconsistency of restaurants at Mumbai.


It was quite crowded but we got a reservation and didn't have to wait for the table. The service was quite collected and up to speed despite the crowd. It was slightly hot as we were close to the pizza guy but it was fascinating to see him immersed in his work.


I ordered a white wine sangria which was a bit sour and didn't really leave a good mouth feel. The beef roulade was nice...raw tenderloin slices with a nice salad...however the salmon rolls which were a cream cheese roulade were ice cold. Literally. Was frosty and had bits of ice. The waiter said that this is how it was served as the dish was frozen to keep it together apparently. Tasted a lot better after it was at the table for a few minutes and the dish thawed and one could taste the salmon. I am no expert but if there are any chefs here, is ice on salmon acceptable?

The spaghetti al salmone was undersalted and this time had less salmon....and I had the beer and meat risotto which was so hot that it singed my once frozen by the salmon tongue and lacked salt too.


The desserts looked unimpressive and we skipped it.


Didn't delight unlike earlier meals here. Hopefully this is an aberration.

I go to Cafe Mangii in Khar and Powai quite regularly and have always relished the food. My favs have always been the Caprese Salad, Putanesca Pasta and the Ricota and spinach ravioli in a Divine Porchini mushroom sauce.

Yesterday, my love affair with Cafe Mangii ended. I was introducing a friend to the restaurant over lunch at the Powai branch and ordered for the usual fare. Along with the pasta, nestled within the sauce came a robust lock of hair. Yikessssssss. I was grossed out completely. It's surprising that you mention you had the same experience. This is so not expected from an upmarket place like Cafe Mangii. My canteen guy in the office is much more dependable when it comes to hygiene!
23 May 2012 at 15:42